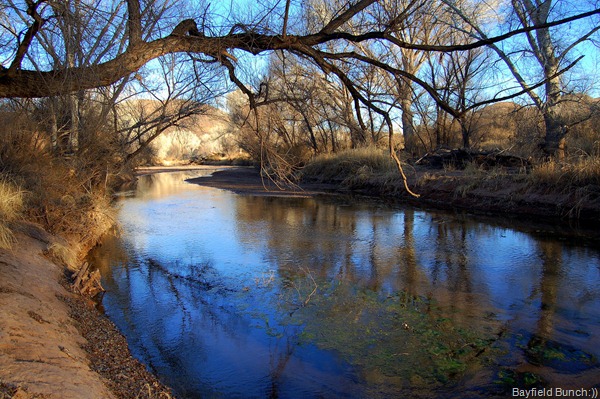 ALONG THE BANKS OF THE SAN PEDRO RIVER NEAR THE GHOST TOWN OF CHARLESTON, ARIZONA

NOTE:  I was minutes away from publishing the blog when I somehow did something that wiped out all my photos which I had so painstakingly gathered up for tonight’s blog.  At this point I am just to tired to go back & redo all the photos again.  Remember Tuesday’s blog about being tired & making mistakes…..well, I rest my case:((

I would have to say the most exciting part of today was our short jaunt to the local dump this morning.  No garbage pick up here like back home so it was a good excuse to take the little Motormouse for a ride in the Jeep & explore around a few dusty neighborhood roads.

We have had night visitors……..inside our fence line!!  Noticed the tracks Tuesday morning while filling a small water trough in front of the house.  The recently installed & strong metal perimeter fence is a deterring 4 feet high but that has not stopped a certain type of rascally critter from leaping over the fence & coming in for a drink of water.  Fresh deer prints were visible in the soft sandy like soil around the water trough.  I have since located an old plastic picnic cooler, filled it with water & placed it on the outside of the fence where we have seen Javelina, Gamble Quail & Deer.  The local bird population sure likes the idea as well.

Finished my, ‘Log Of An Arizona Trailblazer’ book today by author J. A. Rockfollow, one of Arizona’s early pioneers.  Another fine example of Arizona’s history from the latter 1800’s into the early 1900’s.  The western frontier was a wildly exciting place in those times & I’m always surprised at many of the things that took place, both good & bad.  There was a certain degree of lawlessness alright but there was also a great deal of comradeship, good deeds, & gentlemanly ways.  Certainly was a different world than we know today.  Harsher in many respects but kinder in many others.  I do like all the modern conveniences of today but sometimes I wonder if maybe I was born a hundred years too late:((

Below is the cover, & all that is left of a book I had as a small child.  I remember the book well & would spend many hours imagining my way through it’s big colorful pictures of the old west.  Indians, stagecoaches, mounted soldiers, cattle herds & cowboys rode the Sagebrush trails across the pages.  Behind the riders were always the dark & mysterious mountains that imprinted themselves on this small boys memory. 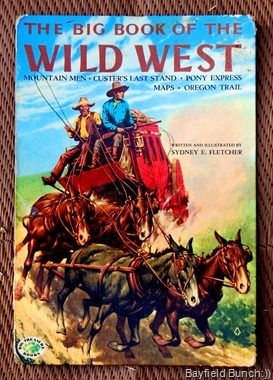 It would eventually take me many years to make my way across the land to finally catch site of my first real mountain.  Still, to this day when we travel west in the fall I strain my eyes to catch the first tell tale sign of the great mountains looming out of the distant haze.  The small boy in me is still in wonderment of this land I first saw in the pages of my, ‘Big Book Of The Wild West.’  I have been very fortunate all these years later to have now walked in the same footsteps as General George Armstrong Custer up in Little Big Horn Montana & Butch Cassidy in Panquitch Utah.  I have also walked the same streets as Wyatt Erp, Doc Halliday & the boys in Tombstone Arizona.  I have hiked the very trails & been to the very watering holes used by the legendary Indian Chiefs, Cochise & Geronimo.  Hiked into the very heart of the COCHISE STRONGHOLD in the Dragoon Mountains as well.  I have seen the old stagecoach ruts worn in the ground at Apache Pass near FORT BOWIE & stood in a buildings ruins where Geronimo was once held in captivity.  We have walked through the old BUTTERFIELD STAGE RUINS in both Arizona & California, located the grave of JOHNNY RINGO at the foot of the Chiricahua Mountains & gazed into an old tumble down Saloon in the ghost town of GLEESON ARIZONA.  We have also walked the overgrown streets & picked our way through the long forgotten ghost town ruins of CHARLESTON, Millville, COURTLAND & FAIRBANK.  We have also been fortunate to have attended another historic ghost towns annual remembrance at, PEARCE HERITAGE DAYS. EAST OF TOMBSTONE LOOKING WEST TOWARDS THE HUACHUCA MOUNTAINS

The old frontier is still alive here in the west if you just take the time to feel it’s presence.  It may not be as obvious & wild as it once was but it is still here if you take the time to feel it’s presence.  Real cowboys on working ranches herding cattle is still the way of the west.  Cowboy hats & boots are the norm & if you look carefully you can still see some of the fellas carrying real guns in holsters.

Mountains on the horizons, cactus on the trails & ghosts in the wind.  Yes, the west is still alive for this little boy as it rides it’s way every day right out of the pages of his long lost big old cowboy book…..:))

GROANERS CORNER:((    A tough old cowboy told his grandson that if he wanted to live a long life, the secret was to sprinkle a pinch of gun powder on his oatmeal every morning.
The grandson did this religiously to the age of 103. When he died, he left 14 children, 30 grand-children, 45 great-grandchildren, 25 great-great grandchildren, and a 15 foot hole where the crematorium used to be.