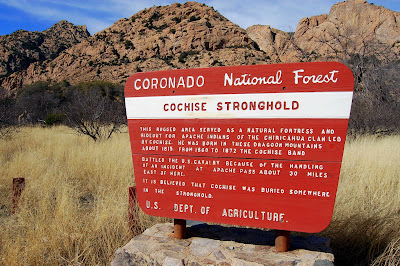 It was so nice to finally not have a freezing cold night & I'm thinking it may have been our mildest night since leaving Ontario back in mid November. Didn't even have to run our Blue Flame propane heater. And, to-night is going to be even warmer. Just came in from looking at Comet Lulin again & I hardly needed a jacket. 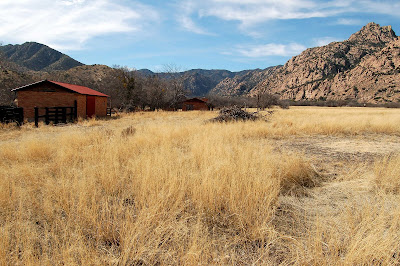 AN ABANDONED RANCH WITH THE COCHISE STRONGHOLD IN THE BACKGROUND RIGHT

Bit of a cloud cover when we got up this morning so figured it might be a good day to head for the Cochise Stronghold about an hour's drive north of here. http://www.cochisestronghold.com/ Weatherman said it was going to be a very warm one (a record breaking 91F in Tucson to-day) so a bit of cloud cover was probably good. Kelly made up some peanut butter sandwiches & popped some bottled water & orange juice into a back pack & we were off about 9:30. A totally beautiful morning as we headed into the little town of Sunsites & made a left turn on Ironwood Road. We could see the Dragoon Mountain Range ahead of us & Cochise's Stronghold was plainly visible with it's large rock mountain called Rockfellow dome. The mid morning sun played across the rugged looking mountains casting shadows into deep canyons & highlighting the tall jagged peaks. It gave one the feeling of a very mystic & mysterious place. The paved road soon turned to dirt & gravel becoming a bit washboardy. Stopped at an abandoned ranch for some pictures. It was one of those kinds of places you just wanted to sign on the dotted line & move right in the next day. 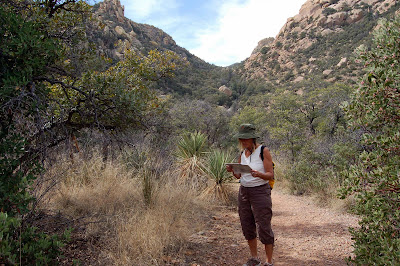 At the end of Ironwood Road is the Cochise Stronghold Campground. Not for large RV rigs but you can get in there with small trailers & truck campers. http://www.hikercentral.com/campgrounds/114051.html
It's a cozy little campground with a lot of trees & the trailhead for the 3 hiking trails are right there. We decided on the longest trail which leads up into the mountains for 3 miles to the summit divide. When you reach the divide you can also begin a descent on the west side of the mountain range. Our goal was to reach the summit & then return the same way back to our car, all on the east side of the mountains. And, that is what we did. 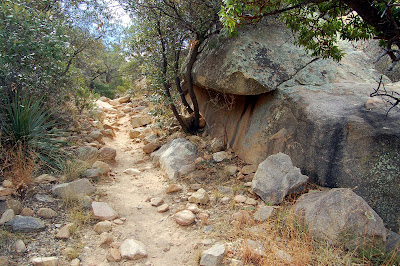 IT'S A 6 MILE ROUND TRIP ON A ROCKY TRAIL

Right from the parking lot the trail begins it's ascent & it's a continuous climb for the next 3 miles. In hindsight, we should have taken more water & less camera gear, binoculars, etc. By the time we got back down the mountain 5 hours later all that gear seemed to have doubled in weight somehow. This is a beautiful area with an abundance of greenery everywhere. We were especially taken with the early flowering Pointleaf Manzanita bushes along the trail & for us northerner's it was sure nice walking along underneath green trees once again. Pines, Junipers, & Cottonwoods, just to mention a few. We do miss our trees!! The first third of the trail is reasonably good walking & we met some fellow hikers along the path on their way down from the summit. Nice folks from Utah & Colorado. They told us the trail gets steeper the higher you go. And, they were right. 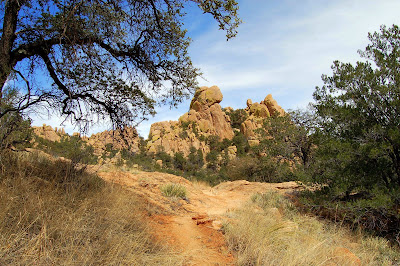 We moved on, rounded a bend & the trail began to climb sharply. The scenery began to change as well. Less trees & more open vistas around us with many towering rock formations. Again came the feeling of how lucky we were to be here. At one point we had just come down through a narrow slot in the rock path when we heard voices ahead. Coming down the trail through a rocky outcropping was a lady leading a horse with a small boy sitting on it. Behind them were 3 cows & behind the cows was another lady bring up the rear on another horse. We stepped aside on the path to let them through but couldn't believe that they were going to try & go up the rocky narrow & steep section of rocks we had just come through. But, sure enough, without a seconds hesitation that's right where they headed & while I cracked off some pictures, they went right up, over, & through what we thought was an impossible situation. Two women, two horses, 3 cows, & one small boy. Guess we got a lot to learn about cows, horses, women, & small boys!! Apparently they were taking the cows from one section of free grazing land to another. I could have understood it if the cows had been mountain goats......but cows!! And they didn't even have good Merrell hiking boots on their hooves. 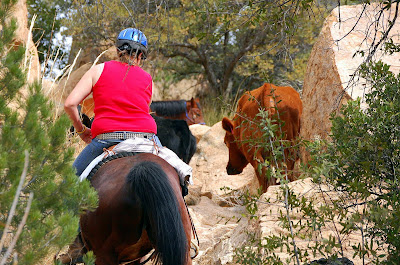 COWS & HORSES ON THE TRAIL

We continued our upward trek until we reached an old man made spring. Stopped for a peanut butter break here before continuing on. Wasn't long & we reached a place called, Half Moon Tank. Might have been the Army Corps of Engineers who built this small dam years ago but not sure. When we got there a fellow was kneeling beside the cement dam & using it's top as an easel for his painting. Nice chap & we talked to him for a bit about directions. He was familiar with the trail, having been there before. 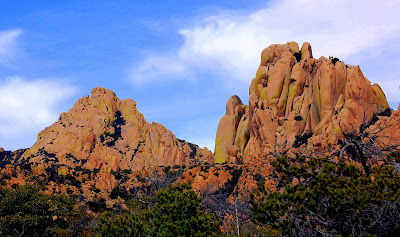 We continued our ascent but by now we were both tired & running out of steam. We thought of turning back but it seemed we had made it about two thirds of the way & it would be a shame not to reach the summit. Stopped & talked to another hiking couple from Wisconsin. They had a portable GPS with them so we talked about that for awhile before making our final push to the summit divide location. We were sooooo tired by this time that it just didn't matter any more. The time was 2 P.M. & we had been hiking steadily upwards for over 3 hours when the summit divide was finally reached. I had been hoping to see a sweeping panoramic view of the San Pedro Valley splayed out before me........but it was not to be. I could see a bit of the valley to the north & a fellow hiker said I would have to go farther down the west side of the mountain to see farther out into the valley. That was not going to happen!! We were at our limit of endurance as it was & we already had a 3 mile hike ahead of us back down the mountain trail to the parking lot & our car. Our feet & legs were already sore but at 2:15 we began our descent & at first it was a relief to be going down hill using our uphill muscles in a downhill sort of way. But, that didn't last long & soon our toes were trying to push themselves out the front of our hiking boots. But, we just kept going, & going, & going and all the while, our backpacks, camera bags, etc just kept getting heavier & heavier & heavier. 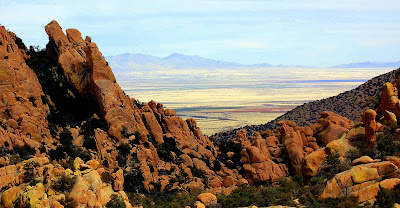 To make a long story short, we finally made it back to our car in a flurry of grunts, ughs, & groans about 4:15 P.M. I think the last 500 yards to the car were the worst. Just like when you have to go the bathroom real darn bad, it seems the closer you get to the washroom, the worse the urge to go, gets!! It felt sooooo good to sit down in those soft cushy car seats. Luckily we had water, coffee, & an orange in the car so that was priority 1. Second thing was to get our shoes off & give our feet a break. With that done I hooked up my seat belt, started the car, put it in gear, & drove all the way back to the ranch in my socks. 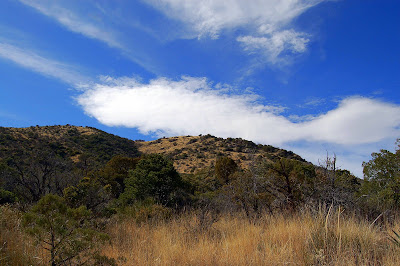 COCHISE PEAK....HE MAY BE BURIED UP THERE SOMEWHERE

It was after 5 when we rolled into the yard. Lots of happy dogs to see us as we quickly changed our hiking hats for our farm chores hats. The donkeys & horses were happy we were back but boy oh boy were the chickens ever mad at us for being late. It's not nice having chickens mad at you. They can give you such a stare!!

OUR PHOTO ALBUMS http://picasaweb.google.com/stargeezerguy/
Posted by Al Bossence at 2/24/2009