TO-DAY WE FOUND THE RUINS OF CHARLESTON ARIZONA 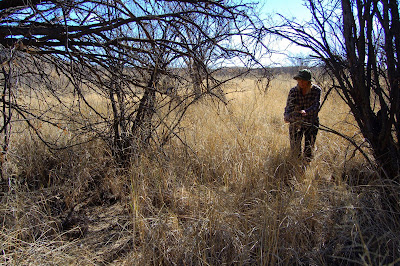 BEGINNING OUR SHORTCUT TO CHARLESTON

WEDNESDAY JANUARY 28/09 (Computer seized up a couple times Wednesday night so couldn't upload the blog. About half the web albums made it & I'm uploading the rest of the pictures right now....Thursday morning)
The thermometer in our bin said the temperature dropped to 36F last night but it must have been lower because there was a layer of thin ice on a large vat of water nearby used for watering cattle. Didn't seem as cold to me on our morning walk as the morning before though.

A chance encounter with the older couple while on our walk this morning led to some better information as to where the elusive ghost town of Charleston could be found. We had been close the day before, but not close enough so we decided to go back this morning & have us another look.

Started off on the other side of the San Pedro river this time heading for another ghost town called Millville. Charleston & Millville were separated only by the river but Millville was going to be much easier to find because of paths, directions, & reader boards. The brochures & the BLM officer yesterday told us there wasn't anything left of Charleston except a few old adobe foundations. That information is misleading. The brochures also state there is more left of Millville than there really is. Again misleading. It's obvious the BLM authority do not want people finding the ruins of Charleston so all the emphasis is put on the Millville ruins..........of which there isn't much left aside from a few old stone foundations scattered amongst the thick underbrush. The Gird House is one of the few recognizable foundations left. 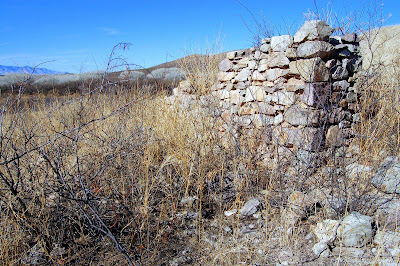 SOME OLD MILLVILLE RUINS
We knew the old ruins of Charleston were somewhere across the San Pedro river & we also knew there was an old rail bed running along the north side of the river between Millville & Charleston so we figured if we could find a way through the heavy underbrush bramble & many mesquite trees we should be able to come across the rail bed. From there we had a pretty good idea where to go because of the information the older farm couple gave us. From the Millville path we headed into the thickets & managed to find our way through to the rail bed. (check to-day's web album for pics) It was not easy going & we got ourselves full of prickles & small scratches. Had to carefully crawl through a barbed wire fence as well. 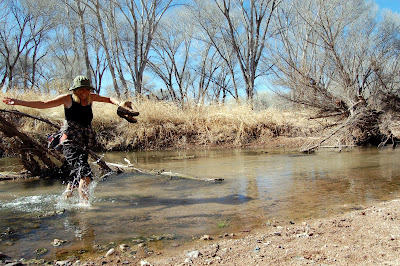 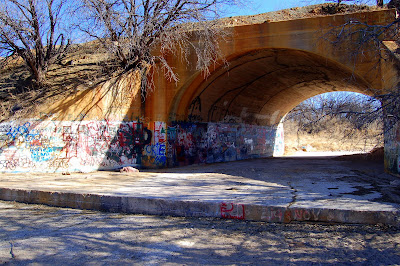 SPLASHING ACROSS THE SAN PEDRO & THE CEMENT BRIDGE CULVERT UNDER THE RAIL BED
Once up on the railbed we finally found the bridge over a dry wash the lady had told us about so we knew we were getting closer. She said to turn northwest & cross the San Pedro river at this point & then head straight for about a quarter mile to the ruins of Charleston. We made our way down the bank to the river & then made the mistake of heading up river a bit to find a better crossing. Turns out the best crossing is right there at the large graffiti infested concrete culvert. We searched for a narrow spot in the river but didn't find one so finally picked a spot to cross & away we went......after removing our shoes & socks & rolling up our pantlegs of course. And yes, the water was icy cold!! We then made the second mistake of walking downriver a bit looking for a path which we couldn't find. We knew the ruins had to be on our left somewhere so headed into the underbrush again. Luckily we blundered onto a path & after a bit of searching we followed a second path up a slight rise. The mesquite trees were very thick here. Kelly stopped & pulled a peanut butter sandwich out of her pack, tore it in half & handed me a section. I stuffed it in my mouth, turned around, took about 3 steps..........and there off to my right, through the mesquite brambles I spied an adobe wall. "Walla" we had just found the ghost town of Charleston:)) It immediately became apparent there was far more to see here than in Millville just back across the river, but first let me explain something about ghost towns. 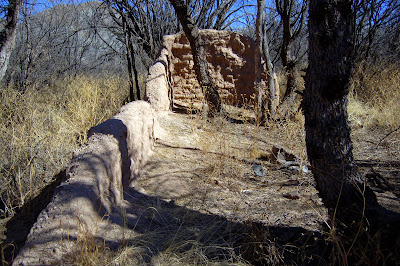 CHARLESTON RUINS
The words "ghost town" conjures up old wooden buildings with broken windows, doors ajar, wooden sidewalks, some rusting tin roofs on the buildings, rooms inside with old paraphernalia, etc. etc. Kind of a Hollywood looking ghost town with streets & alleys. Some are manufactured ghost towns for the sole purpose of attracting people & commercialism. These are the ghost towns we most often think about & see in our minds. And these are the ghost towns in namesake only. Real ghost towns as a rule look nothing like any of the above & so it is with Millville & Charleston. These & other places like them are the real ghost towns of the old west. 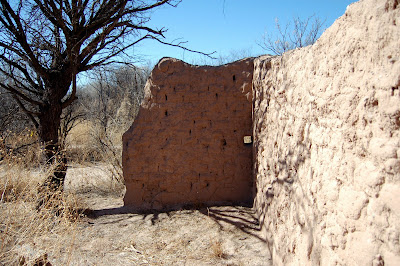 MANY ADOBE WALLS STILL STANDING IN CHARLESTON
We spent about 40 minutes in Charleston to-day & I took a lot of photos. So many in fact that I'm only going to include a few in to-day's web album because I have already uploaded all the Charleston photos into their own album. All's you will see is sections of adobe walls with a lot of trees & grass growing in & around them, but for anyone who has an interest in this sort of thing, they might enjoy the photos. We didn't count, but we think we saw between 15 & 20 structures. I will include some links here that give the history of Charleston & Millville.......
http://clantongang.com/oldwest/charles3.htm
http://www.azkatz.net/Sites/Quiz/Lesson1.html

We finally left Charleston to it's ghosts & memories around 1:30 & headed back to the river. Off with the shoes & socks & away we went again, tippy toeing through the shallow & icy cold waters of the San Pedro. Shoes & socks back on, up the bank & through the graffiti infested cement culvert to a wide wash on the other side. Followed this back for aways until we picked up the Millville trail again which in turn led us back to the parking lot & our car. We had been gone about three & a half hours. Boy, was it great to sit down in those comfy car seats at last. 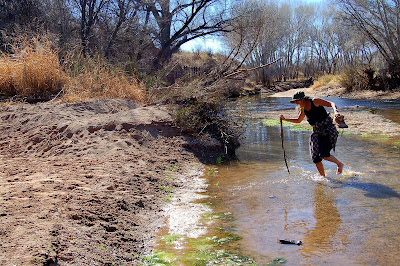 IS SHE GONNA MAKE IT:))
We were back to the rig in about 5 minutes & spent the next couple of hours resting up. Around 3:30 we took a short 3 mile drive over to Tombstone. Just wanted to check out where to get gas & propane when we leave here Friday morning. Parked the car & walked over to Tombstone's gunfigher street. Looked the same as when we had been there before just a couple of years ago. Only to-day we were lucky enough to catch Wyatt, Doc, & the boys out on the mainstreet just hanging around before the big OK Corral shoot out at 4 p.m. Cracked off some photos before the guys all sauntered over to the OK Coral building. If you want to see guns blazing & bodies dropping, you have to pay to see that inside the building, so needless to say we just kept walking. 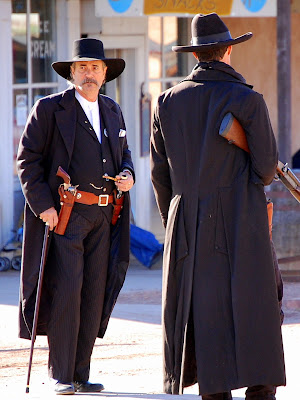 GUNFIGHTERS ON THE STREETS OF TOMBSTONE
My main purpose now was to find the Crystal Palace. A few days ago Kelly had started a thread in the RV Net Forum with some queries about the area & several people answered & have kept the thread going. Yesterday we actually met one of those fellas. This morning a message arrived from a fellow by the name of Len who remembered the Crystal Palace in Tombstone. So Len, Kelly & I went into the Crystal Palace about 4:15 this afternoon & raised a silent toast to your old departed friend, Buck . I took some photos inside for you as well & you will find them in to-day's web album.
RV Net Forum...http://www.rv.net/forum/index.cfm 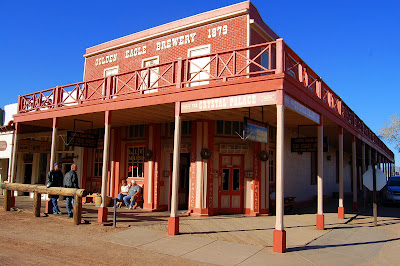 THE CRYSTAL PALACE IN TOMBSTONE
We were back to the rig by 5 & that was about it for another fine day in beautiful sunny Arizona........:))

OUR PHOTO ALBUMS http://picasaweb.google.com/stargeezerguy/
Posted by Al Bossence at 1/29/2009