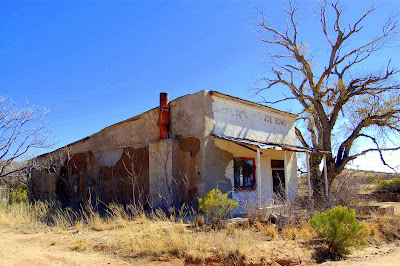 I think it had to be one of the coldest nights we've had so far. Left a hose nozzle & sponge in a bucket overnight by mistake & this morning they were froze solid in the ice. Strangely enough the plastic nozzle didn't break & has survived to squirt another day. Cloudy to-night so maybe we'll get a little break from the frosty temperatures.

Rene & Jim rolled out this morning around 9 a.m. headed for New Mexico & Texas. They are booked into an RV park to-morrow somewhere near the Arizona & New Mexico border. They don't travel with a television in their rig so they wanted to be at the park to watch their appearance on television Sunday night Feb. 15th. The program will air on PBS & is called, Why We Love Our Cats & Dogs. Their dog Jerry, who they lost to cancer last year will be part of that show. Rene & Jim's website is http://www.liveworkdream.com/ 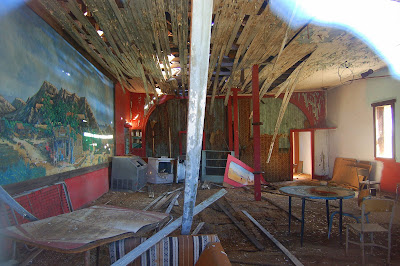 INSIDE THE CRUMBLING SALOON

We had some DVD's to take back to the Elfrida Library this morning so we figured we would do that & head out northwest of Elfrida to the old mining & ghost town of Gleeson. It's one of those places that you could drive through & never know it was there if you weren't specifically looking for it. Spotted a few old tumbledown houses first & then the cemetery. No ghost town is complete without it's past inhabitants buried somewhere near by. The cemetery is on a slight hill at Gleeson's west end & overlooks what was once a bustling mining town of 500 people.
http://en.wikipedia.org/wiki/Gleeson,_Arizona
The cemetery is mainly overgrown now but part of it is still being used. Small piles of rocks mark some of the gravesites while others have old iron gates surrounding them. The weather has worn names off some stones while some have crumbled into the dust. I'm sure there are many more people buried here than time remembers. 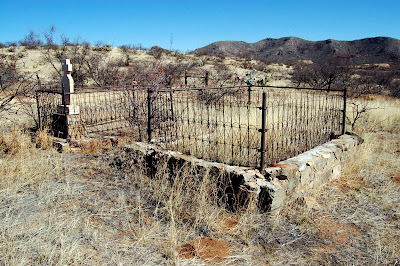 From the cemetery we stopped at the ruins of an old house where I took more photos. If only those old crumbling walls could talk. We saw a long white building on the north side of the road with some people standing behind it so headed over that way. It was a Jeep tour guide giving a couple of people a driving tour of the area. He was very friendly & gave us some history on Gleeson. Not sure if the gun & holster he was wearing was real or just a prop. We don't see things like that in Canada!! The long white & deteriorating building we were standing beside was once Gleeson's lively saloon. It was here that Tombstone's Johnny Ringo was last seen alive.
The building is locked up because it is crumbling & not safe to enter but we did find a small space in a front window that I was able to get my camera up against & take some photos of the interior. It wasn't until we got home & I could look at the photos that we knew what the inside looked like. Appears to have been a stage at the far end & there is a large mural clearly visible on the north wall. I'm sure this was probably a very lively & rowdy old west place in it's heyday. Afterall, it was a mining town. Part of the roof has caved in & I think the building is beyond repair which seems too bad because I'm sure it probably has some historical significance to the late 1800's. I did manage to scramble my way through the brush & have a peek into the rear of the basement but it was pretty deteriorated in there with parts of the floor coming down. If there are such things as ghosts, I think this old crumbling saloon probably has it's fair share of them. 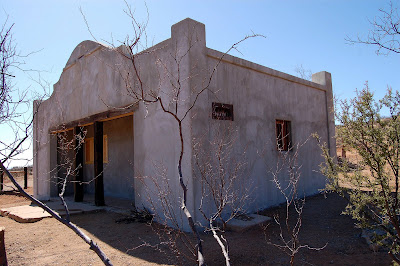 ONLY THIS OLD JAIL HAS BEEN RESTORED

From the saloon we went a short distance up the road to the old jail which is in the process of being restored by a private party. Managed to take a few pictures of the interior through a small window in the door. All these photos I'm mentioning will be in to-days web album. http://picasaweb.google.com/stargeezerguy/ Across the road & up a bit is the ruins of a large building that once housed Gleeson's school in the basement & a large dance hall upstairs. This was a very solidly built building with a lot of concrete in it. Probably the center of a lot of Saturday night dances years ago. One can only imagine the outcome of those nights where guns & alcohol to-gether were commonplace. 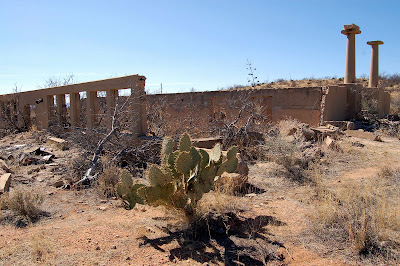 Our last stop before leaving Gleeson was the old adobe ruins of the hospital. Just some sections of walls standing with long gaunt windows in them. Couldn't help but think of all the pain & suffering that must have taken place inside these walls many years ago. There appeared to be a large round well on the south side of the hospital as well. In the distance I could see where the mining operations had taken place & wondered how many mine accident victims would have been brought down out of those hills by cart or horseback to this very hospital. 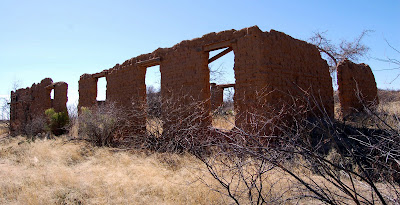 It is so hard to comprehend how people lived & died years ago in these small mining towns scattered throughout the southwest. But, at least some of that history is still here for people to see if they are interested. And it is what's left of these small towns that is the true history of the west. A lot of people come to see Tombstone Arizona thinking that is the original old west but Tombstone has become so commercialized that it is nearly impossible to separate fact from fiction there. If there is any originality left, it is lost in all the glitz & Hollywood glamour. If you want to see the true old west as it once was you have to get out & hunt down these little ghost towns scattered over the desert sands. But, be prepared to be disappointed if your expecting to see what you have so long been watching in Hollywood movies. You will come face to face with the reality of time & it's effects on man's history. So, bottom line......if you want to see a Hollywood ghost town, go to Tombstone. If you want to see the real McCoys, get your driving map out, get your hiking boots on & search out places like, Gleeson, Pearce, Fairbanks, Charleston, Millville, & countless others in this area. Last year in New Mexico we found places like Chloride & Hillsboro just to mention a couple. In California last December it was the mining town of Tumco.
http://picasaweb.google.com/stargeezerguy/83THELITTLEWESTERNTOWNATTHEENDOFTHEROAD
http://picasaweb.google.com/stargeezerguy/82THROWINGSNOWBALLSINTHEEMORYPASS
http://picasaweb.google.com/stargeezerguy/THEOLDTUMCOMININGSITE 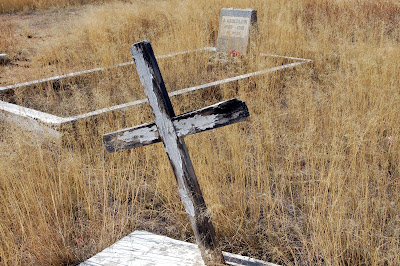 THEY SAY THERE ARE MANY GHOSTS HERE