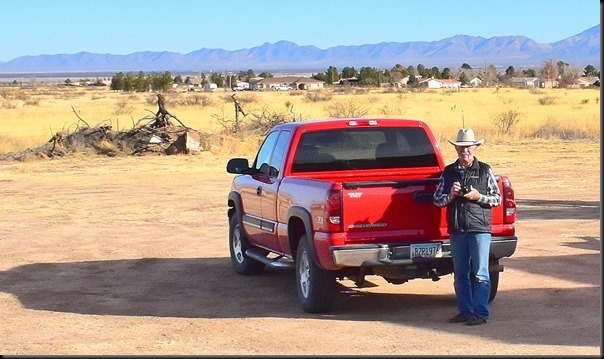 MIKE WITH HIS CAMERA CAME OUT AND GAVE US A GREAT BIG COWBOY WAVE WHEN WE LEFT:))
A slightly high thin cloud cover held the warmth in and our morning was not as chilly as other mornings.  It was moving day for us so while Kelly took Pheebs for a walk I busied myself attending to coach prep and tank flushes, etc.  It was soon time for us to hit the trail so we said our good-byes to Janna and Mike, and were on our way by 9:40.  Janna and Mike, Montana ranchers, are just the best.  Mike is one of those rare fellas I can let my hair down a bit and feel comfortable with.  We first met Janna and Mike near Bouse Arizona where they were boon-docking years ago and we’ve been good friends ever since.  Our lifestyles kind of parallel each other at times.  They’ve had 13 RV’s and we’ve had 8 and if we were to combine all the other vehicles we’ve both owned we could probably open up one of the largest old car dealerships in the Southwest.   Thanks for your kind hospitality guys and we’re looking forward to seeing y’all again sometime:))  P.S. With all your renovations and hard work your house is looking great:))

WE’RE ALL PACKED UP AND ABOUT READY TO GO 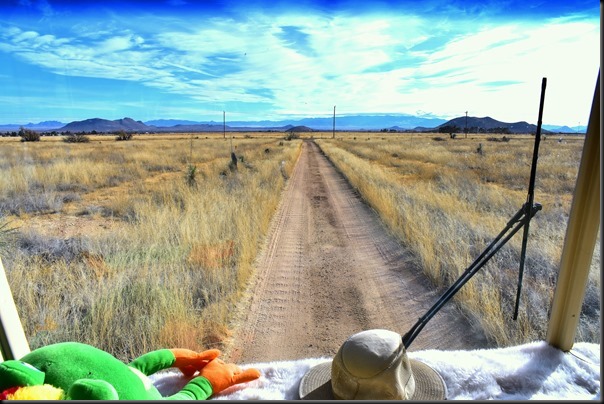 BYE GUYS
Heading south on highway 191 from Sun Sites we weren’t long in reaching a little place along the road called Sunizona.  And of course we have a history with Sunizona as well.  At the Mustang Mall we pulled in and topped up our gas and propane tanks.  A few hundred yards down the highway was Sandys Restaurant and RV Park and we knew they had great food there so decided to pop in for breakfast.  Place was packed  except for a couple chairs at the counter.  Ordered us up some bacon and eggs and it was the best breakfast we’ve had in a long time.  We had been to Sandys before years ago and in fact that is where we first met  fellow RV’ers Nancy and Joe Carrier.  You can read about that morning meeting Here.  Joe, a former Blogger had been a blog reader of ours for years and in fact I think Joe was just about our longest blog reader at the time.   While in the area we agreed to meet at Sandys in Sunizona one morning for breakfast.  Joe and Nancy dropped into our Congress house to see us one time as well.  These fine folks are big golf enthusiasts and follow and work the big name golf tournaments around the States.  I think they maybe have met and know all the big golfing pros……….And it was also from Sandys Restaurant on December 2nd 2010 one morning that we met up with some good friends and headed out on a 3 Jeep Wrangler rumble into and around the north end of the Dragoon Mountains.  We eventually reached Dragoon Springs and the ruins of an old Butterfield Overland Stage Stop where 4 Confederate soldiers are buried after a clash with Apache Indians.   You can read my post from that day entitled From The Cochise Stronghold To The Dragoon Springs  Remember to click the photos to enlarge them when you get there. 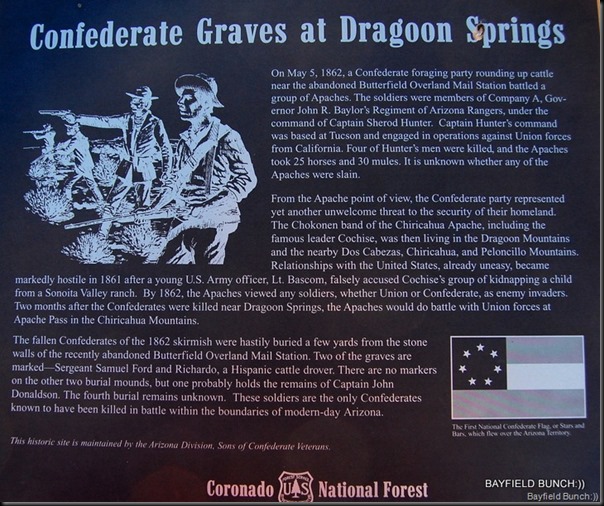 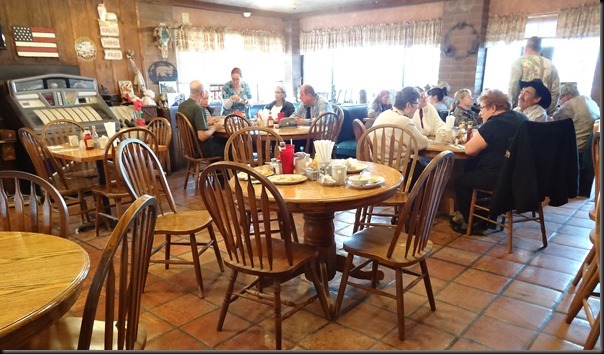 WHEN WE FIRST WALKED IN THE PLACE WAS JAM PACKED SO WE HAD TO BELLY OURSELVES UP TO THE COUNTER….I HAD TO DO MORE BELLYING THAN KELLY DID 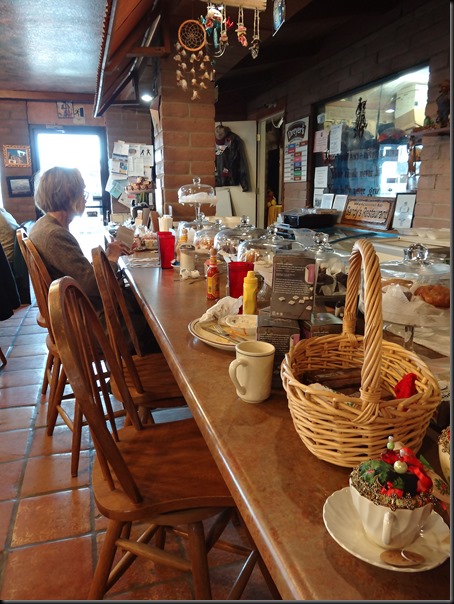 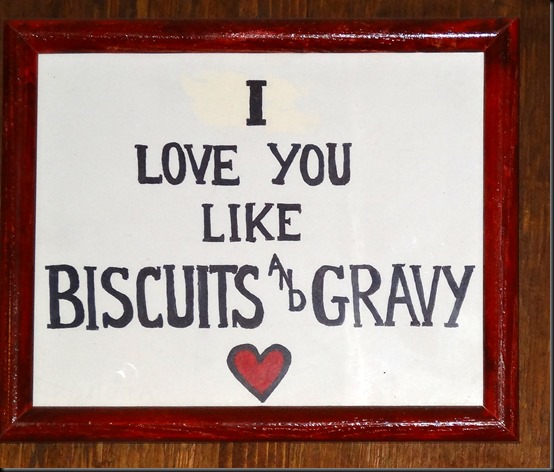 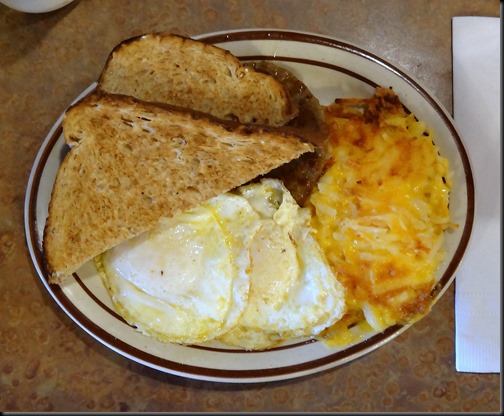 THAT CHEDDER CHEESE HASHBROWN CASSEROLE ON THE RIGHT WAS TOTALLY DELISH
Before leaving Janna and Mikes and because our next destination wasn’t too far we had decided to not hook up the Jeep.  Pheebs and i drove the rig while Kelly followed in the Jeep as we headed south down highway 191.  This is always a nice way for Kelly to get a break from me.  It was all very familiar country for us and I really enjoyed all the memories along the way.  I know my mountain ranges in this area and how nice to see them all again standing like tall un-changing weathered sentinels.  They are like old friends who you can count on to always be there.

YEP, IT WAS A NICE WARM SUNDAY MORNING IN COCHISE COUNTY 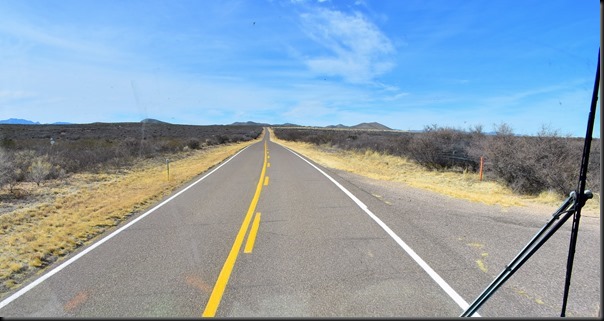 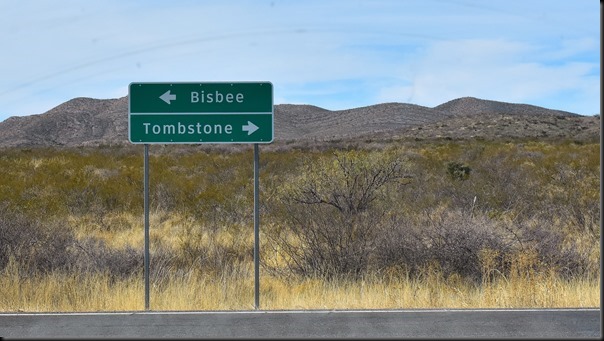 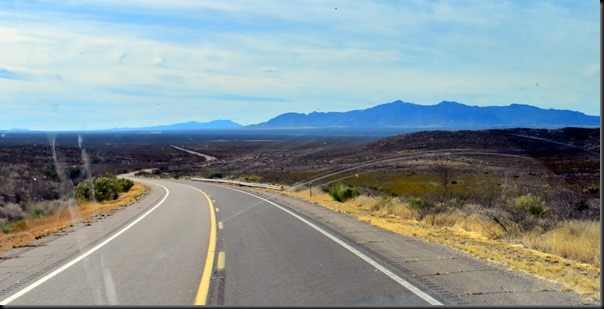 AND THERE THEY ARE OFF TO THE RIGHT…..THE HUACHUCA MOUNTAINS 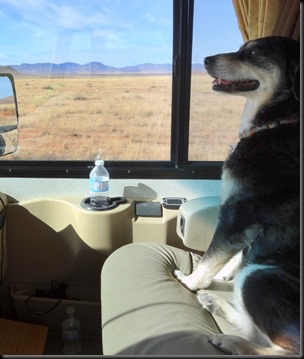 MY TRUSTY NAVIGATOR SCANS THE WAY AHEAD
We rolled through the dustiest of little western towns, Elfrida, and oh how the memories rolled through my mind.  Angled off on the northwest side of Elfrida heading for Davis Road north of McNeal Arizona.  Again many happy memories of our ranch sitting days just a mile or so East of the Whitewater Draw.  It was an absolutely beautiful Sunday morning as we cruised along Davis Road between the Mule Mountains on our left and the Dragoon Mountains on our right,  Reaching highway 80 running between Benson, Tombstone, and Bisbee we hung a left turn in the direction of Bisbee.  A dozen miles later we exited right onto highway 90 running East out of Sierra Vista.  Ten minutes later and before crossing the San Pedro River we reached our destination.  It was a few minutes after high Noon. 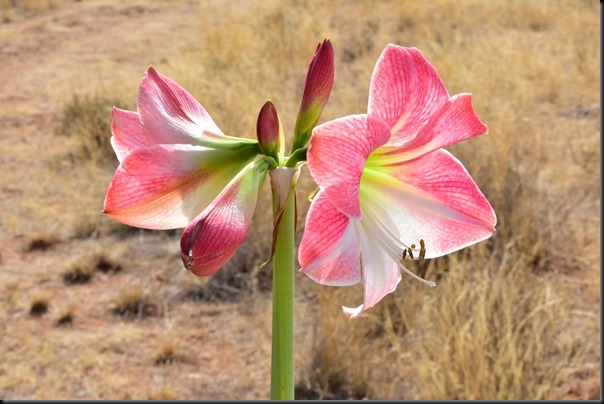 OUR AMARYILLIS FLOWER IS BLOOMING
Oh and before I forget…….BIG changes happening for Nina and Paul over at Wheeling It and you might want to hustle on over there to see what’s going on and especially so if your in the market for a Class A diesel Motorhome with a whole lot of extras thrown in.  A really nice rig for sure.  We have met Nina and Paul half a dozen times over the years and they are two very fine people.  I’ve always considered Nina’s blog one of the best RVing blogs out here.  Always informative and always entertaining.  If we don’t happen to see you fine folks again before you sail we bid you Adieu, wish you well in your new adventure and wave you both a fond Bon Voyage. 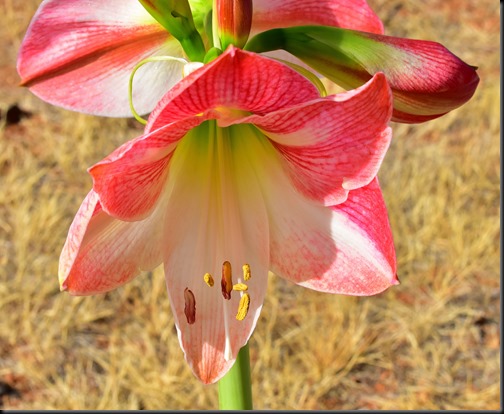 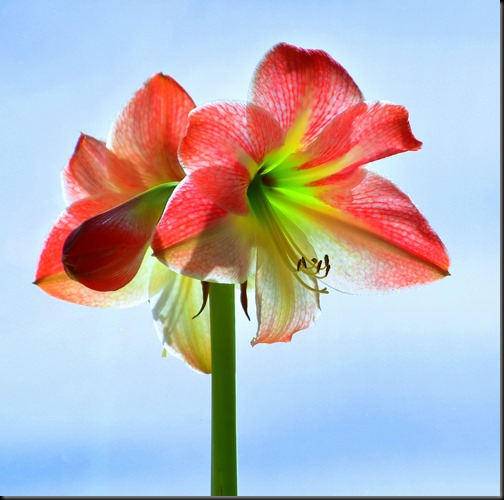 We are boon-docked at Nancy and Pat’s place east of Sierra Vista.  Readers may remember our stay here nearly a year ago when we had planned to meet up with Kelly’s brother Peter and his wife Leslie in Sierra Vista.  Due to medical issues at the last minute  Peter and Leslie were unable to make it so we hung out in this area for awhile before returning back to Borrego Springs California.  It is a very interesting story about how we met Nancy and Pat so I have included that link here, HOW OUR BLOG HELPED LEAD A CALIFORNIA COUPLE TO ARIZONA. 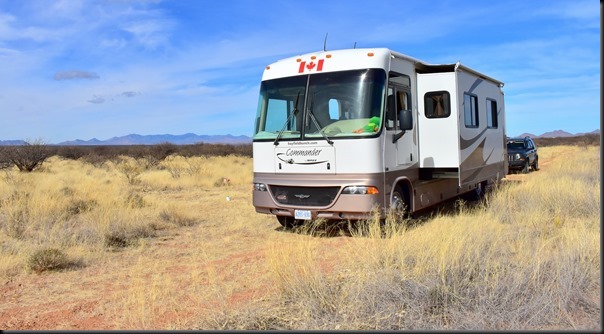 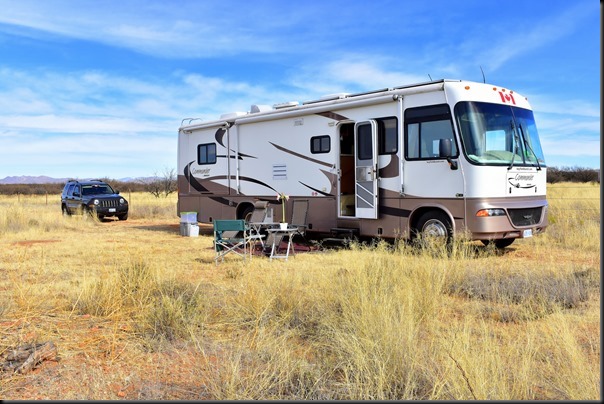 We have us a nice spot, weather’s great and we are in one of our favorite Arizona areas.  We are minutes from Bisbee, Sierra Vista, Tombstone, and both the Mule and Huachuca Mountains.  And by golly I betcha we’ll catch us some movies in Sierra Vista too while we’re here. 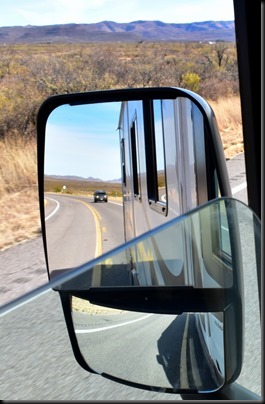 AND BY GOLLY THAT LADY IN THE JEEP LIBERTY FOLLOWED PHEEBS AND I ALL THE WAY TOO >>>>>
GROANER’S CORNER:(( A little boy was attending his first wedding. After the service, his cousin asked him, "How many women can a man marry?"  "Sixteen," the boy responded.  His cousin was amazed that he knew the answer so quickly. "How do you know that?"  "Easy," the little boy said.  "All you have to do is add it up, like the Preacher said: 4 better, 4 worse, 4 richer, 4 poorer."
---------------------
An old man goes to the Wizard to ask him if he can remove a "Curse" he has been living with for the last 40 years.  The Wizard says "maybe, but you will have to tell me the exact words that were used to put the curse on you." The old man says without hesitation "'I now pronounce you man and wife'".
-----------------------
A man and his young wife were in divorce court, but the custody of their children posed a problem.The mother leaped to her feet and protested to the judge that since she brought the children into this world, she should retain custody of them.  The man also wanted custody of his children, so the judge asked for his justification.  After a long silence, the man slowly rose from his chair and replied... "Your Honor, when I put a dollar in a vending machine and a Coke comes out, does the Coke belong to me or the machine?"
====================================