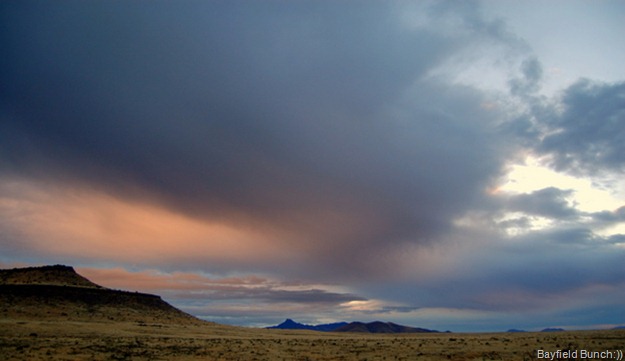 TONIGHT’S SCENICS ARE ALL FROM NEW MEXICO’S ‘CITY OF ROCKS STATE PARK’ NEAR SILVER CITY….NOVEMBER 27TH 2008

I must say right off the top that we were fortunate enough this morning to meet a couple of very fine fellow RV’ers who have been following our blog since the Spring of 2007.  Nancy & Joe Carrier reside in Virginia Beach, Virginia & are trekking across the country to take part as volunteers in the Pebble Beach Invitational Golf Tournament in California next month.  They also work the PGA, the U.S. Open & others.  They have been doing this for awhile now & thoroughly enjoy it.  Joe told us what their volunteering entails but my short term memory has misfiled that info so am hoping Joe can refresh my memory with an email later when they get settled.  I can tell you that it has to do with sharing the greens with the likes of Phil Mickelson, Tiger Woods & all the other golfing greats.  It’s all kind of old hat for these folks. 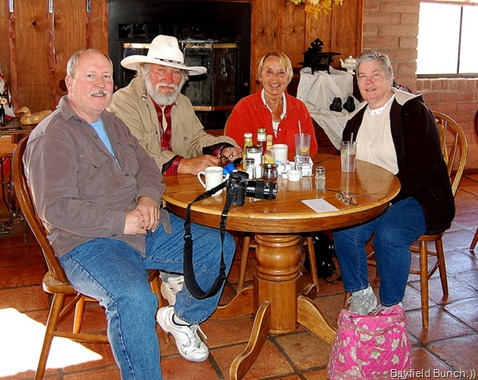 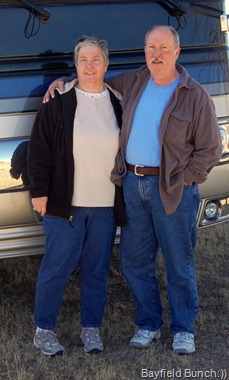 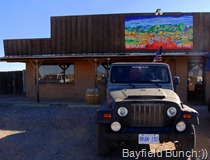 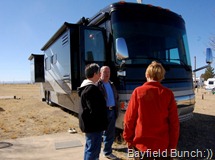 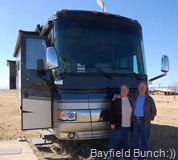 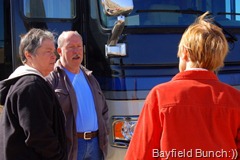 Joe emailed a few days ago saying they were in El Paso & headed our way after a slight detour to the hospital for Joe with a very painful kidney stone.  Joe has emailed us from time to time over the past 4 years & really wanted to drop by & say hello.  I was able to email back directions to Sandy’s RV Park in Sunizona just a 20 minute drive north of us & not too far south of I-10.  Joe is driving a 43 foot Monaco diesel pusher so he needed a bit of room to turn that big rig around & Sandy’s RV Park was just the place. 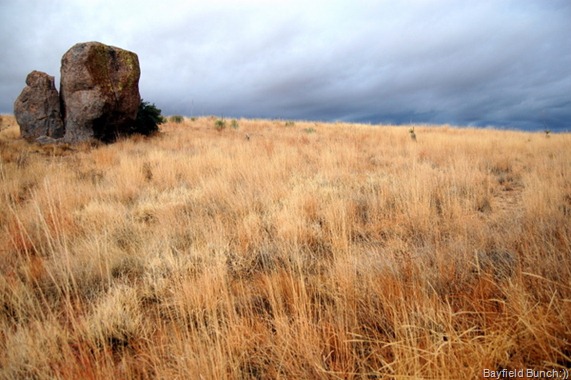 We met Nancy & Joe in Sandy’s restaurant for breakfast.  And, I might add, it was a great breakfast too.  Probably the best Cowboy Omelet I have ever had.  Service was friendly & efficient.  Food was great & we all came away very satisfied 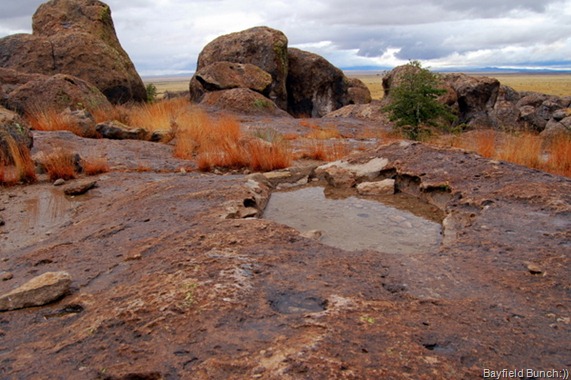 Spent the next 2 hours together having a great non stop RV’ers chat.  Always lots to talk about & conversations just flow when RVing folks get together.   We’re quite a bunch of characters you know:))  They gave us a tour of their beautiful Motor Home & it sure makes ours look like a little upside down Mini Minor in comparison.  I am not always comfortable around people but I felt right at home with these folks & had the feeling Joe & I could hit it off real well as buddies if we ever hung out for any length of time.  We shared a common interest in photography as well & I always enjoy meeting folks with like minded interests.  And, I could tell Joe had a good sense of humor too.  It was so nice of them to take the time out of their travels to detour off I-10 & come down to see us.  I was really impressed with the fact they had already been up earlier this morning & drove to the Chiricahua National Monument for an early morning look see around as well.  Nice to see people actively interested in many of the same things Kelly & I are so interested in too.  Joe has been working on re-evaluating & revamping his Blog/Websites & you can catch Nancy & Joe at  RVING BEACH BUMS.  These are 2 truly nice people:)) 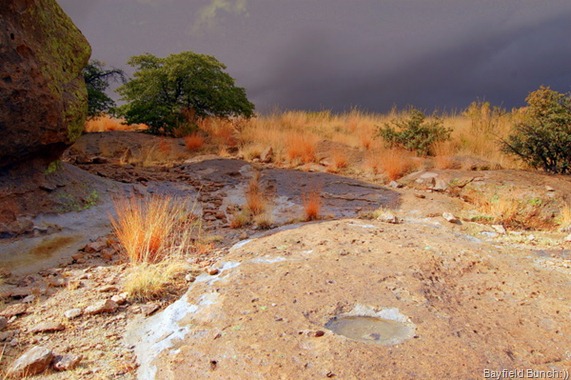 Discovered a little something in my Microsoft Windows 7 program that is proving helpful.  It’s called ‘Sticky Notes’ & allows me to place one or more small square sticky notes on my desktop where I can type in reminders, etc.   Just like the 736 sticky notes we have on our refrigerator door back home.  The on screen notes can easily be moved around the desktop to any location.

And, in the words of John over at THROUGH GATES OF GRACE this past Wednesday, “I often get the sense that others whom do not travel the way we do assume that all is great and wonderful with this kind of lifestyle.”  Oh oh, no brakes on the Motor Home!!

While re-setting up the satellite dish Friday morning I was suddenly alerted by the sound of a sharp shriek of what sounded like a large bird off to my left in a nearby pine tree.  Seconds later I heard it again & it caused me to stop short of what I was doing.  Owl, Hawk, Eagle….what could be so close.  I stared in the direction of the tree watching for movement.  Startled again, there it was, but this time I swore I heard a piano key, & then another piano key.  A split second later I caught site of it sitting motionless on our small aluminum outside table….our Bose!!  So intent was I at setting up the dish that I forgot I had entered my Dan Gibson playlist into our outside Bose sound system moments before.  Anyone familiar with Dan Gibson knows he is the naturalist fellow who for years had recorded the sounds of animals & birds.  Waterfalls, thunderstorms, the sound of rain, etc.  He had mixed those sounds with an orchestra of ambient music to create very soothing & nature oriented beautiful music.  What I heard was the shrill sounds of a circling Hawk preluding to the beginnings of a soft piano instrumental.  Check out DAN & his SOOTHING NATURE MUSIC.  Dan Gibson died on March 18th 2006 in Toronto Canada.  His ‘Solitudes’ series of music is lovingly appreciated by people all over the world. 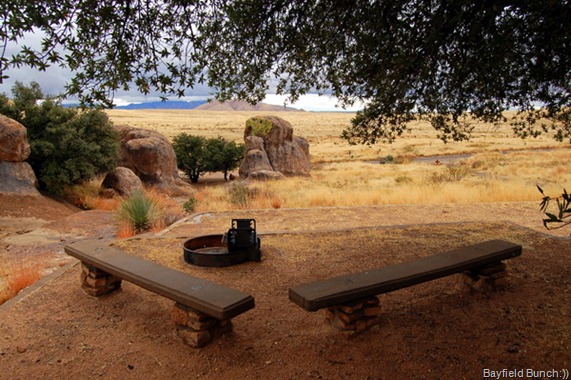 Max woke me up at the usual 2 a.m for his outside constitutional & I have been up ever since so it’s another long day for me.  I did manage to fall off my feet for short 10 minute nap around 1 o’clock in the afternoon but that was it.  Say, have I told you how beautiful our weather is again.  Yes, yes, I know…….quit going on about the weather all the time will ya!!  Hey, I’m just a Canadian & that’s what we Canadians do…..go on & on about the weather all the time:)) 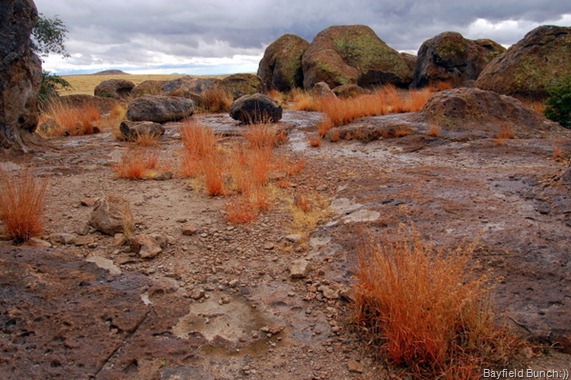 And just a reminder folks, the photo editing program I use for my photos is Google’s free Picasa 3.8. & it’s probably the same program many of you have.  Picasa 3.8 is a relatively easy way for you to make your already good photos…..better:))

GROANER’S CORNER:((  Two nerds are riding along on a tandem bike when suddenly, the one on the front slams on the brakes, gets off and starts letting air out of the tires.

The one on the back says: "HEY! What are you doing that for!?"

The first nerd says, "My seat was too high and was hurting my butt. I wanted to lower it a bit."

So the one in the back has had enough. He jumps off, loosens his own seat and spins it round to face the other direction.

Now it's the first guy's turn to wonder what's going on. "What are you doing?" he asks his friend.

"Look mate," says the rider in the back, "if you're going to do stupid stuff like that, I'm going home!!"