HOW OUR BLOG HELPED LEAD A CALIFORNIA COUPLE TO ARIZONA:)) 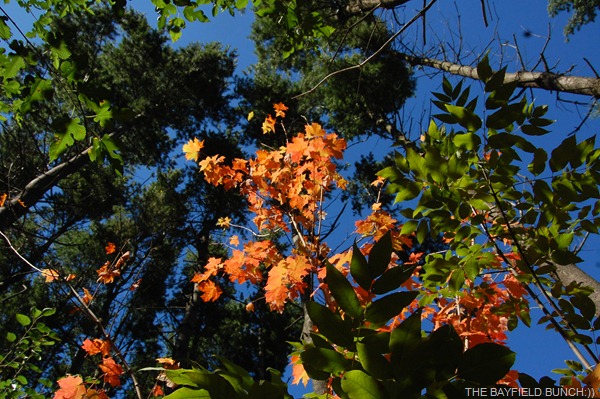 Another hot humid day but thankfully we have a cool down coming for the week-end.  Cranked up the A/C in the Santa Fe & headed off to see Uncle Harry in Mitchell.  He was looking & feeling much better than the last time we saw him at the hospital last week in Stratford.  In fact, I noticed a big improvement in him today from where he has been the last few months. 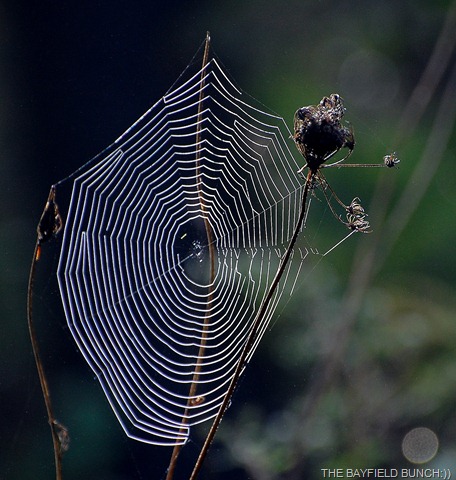 Now, to continue with the second of two stories stemming from our boondocking stay near Tombstone Arizona back in February of 2008.  The second fellows name who emailed us was Pat & he had been stationed at Fort Huachuca years earlier. We had found a spot along the Charleston Road & San Pedro river for a couple nights until a border patrol officer & a State trooper came along & told us we would have to move from that location. Pat knew the exact spot we were first camped along the banks of the San Pedro & shared some memories of his military days in that area. The Border Patrol officer told us of a BLM location about 3 or 4 miles from where we were that might be OK for us so we packed up & moved. The spot turned out to be totally excellent & we stayed there about a week.  Met a charming older ranch couple at that boondocking spot as well. Jack & Gwen came through twice a day in their old Ford truck watering & feeding their free ranging cattle.  It was not unusual for us to have cows feeding nearby. It gave us a nice rural ranch feeling.  Little did we know, our meeting Jack & Gwen would later have a direct bearing on a couple in California we had never met but were in email contact with.  Pat & Nancy were about to meet Jack & Gwen…….just a year later or so. 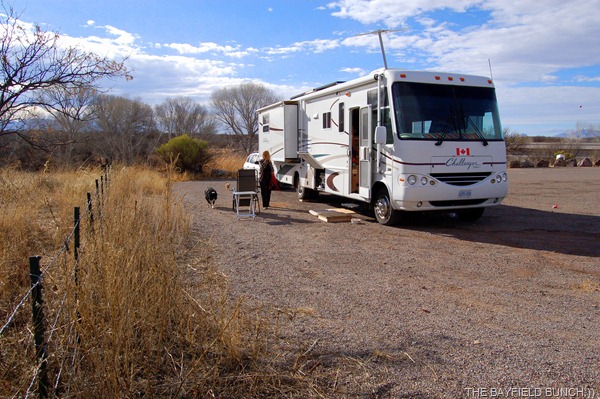 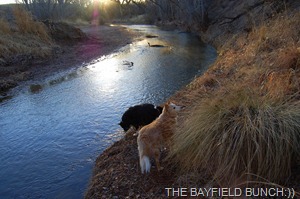 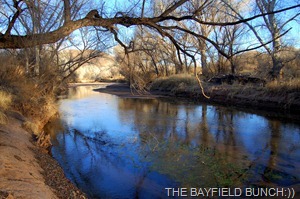 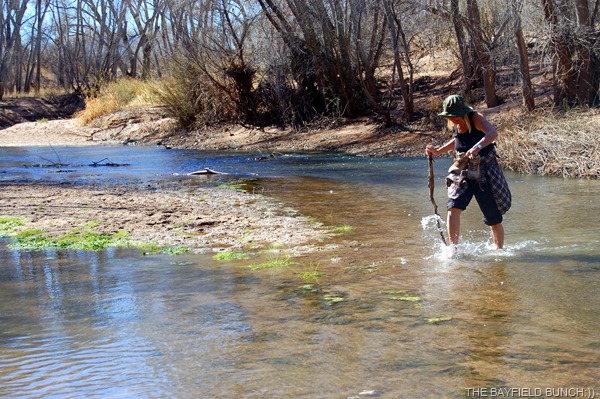 We occasionally heard from Pat over the next few months & years although we never did meet Gwen & Jack again.  Pat & Nancy continued to keep tabs on our travels & especially whenever we were Ranch sitting in McNeal near Sierra Vista. At one point while they were traveling in the Tombstone area, Pat emailed us again wondering where that spot was we had boondocked before. I emailed back the directions & they headed for the spot to camp for a bit. While there, they of course met Jack & Gwen on their cattle rounds. 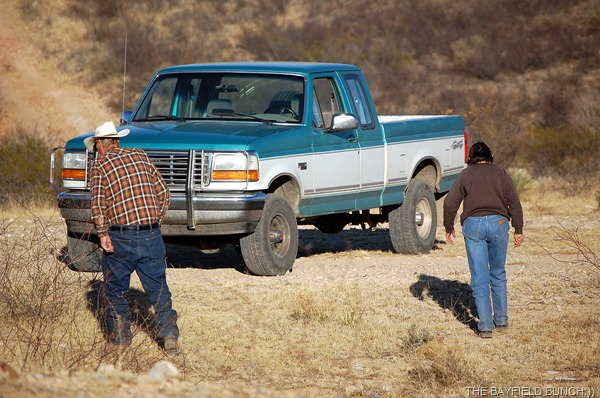 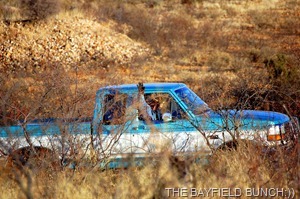 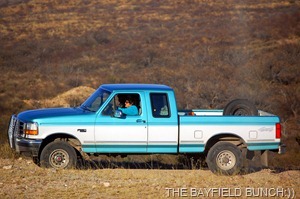 Now, let’s fast forward a year or so to Pat & Nancy’s ‘second visit’ to the Tombstone Hills boondocking spot, & their second meeting with Jack & Gwen. 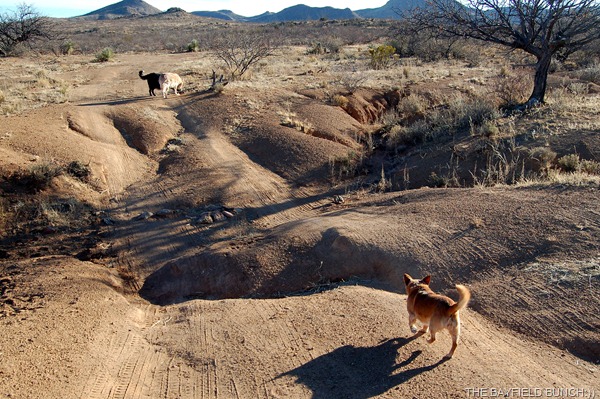 MORNING WALK ON A SECTION OF ‘ROAD’ JACK & GWEN DROVE OVER EACH & EVERY DAY….SEVERAL TIMES!!

While talking with Gwen & Jack again, they expressed an interest in having a look at some real estate in the area. Turns out Jack & Gwen's daughter-in-law happened to be a Real Estate agent in Sierra Vista. To make a long story short, a quick on the spot phone call was made & a meeting was arranged.  In the course of several days some properties were looked at near Tombstone & one near Sierra Vista. Pat & Nancy ended up buying the 10 acre parcel near Sierra Vista. 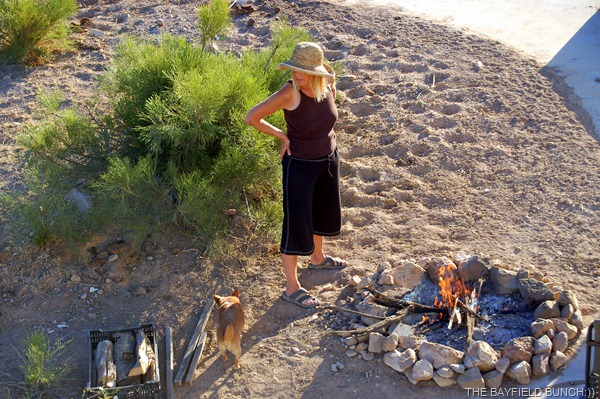 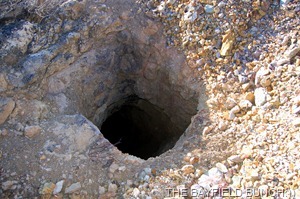 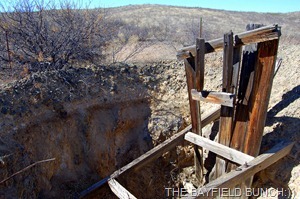 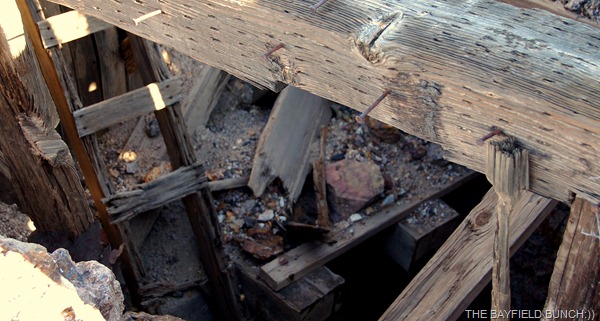 I think it was at this point Pat emailed us to say how influential our travels in the area had been on their decision to move from California to the Sierra Vista area of Arizona. They had already cleared some land & had the basic ground work done for building a new house. Still living in California, Pat emailed us directions on how to find their property & for us to go have a look see.  We were once again Ranch sitting at Jeanie & Ray’s place at the time near McNeal so we drove over to the San Pedro Valley & managed to locate their property.  Photos below show some of the groundwork they had already completed. 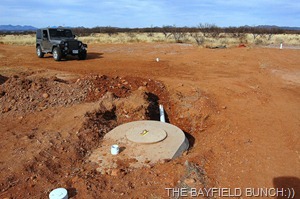 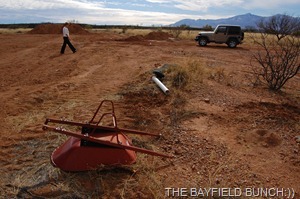 WE LEFT THEM A ‘BAYFIELD BUNCH’ CARD UNDER THE WHEELBARROW 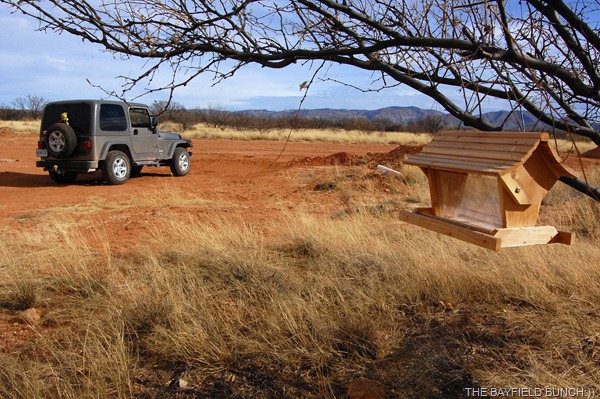 Last year we received another email from Pat saying they had made the move from California, their new house was nearly complete, & for us to drop around. We were Ranch sitting for Jeanie & Ray at that time again. My Aunt Jean was visiting from Florida, so on our way to Sierra Vista & the CORONADO NATIONAL MONUMENT with Jeanie & Ray’s truck to pick up our Jeep (which was in a garage there with a flat tire) we stopped in to meet Pat & Nancy.  They again mentioned that it was the result of answering our question on the RV NET FORUM & their subsequent following of our blogging travels the past 4 years that they were now happily living within sight of the mighty Huachuca Mountains.  Can’t tell you how warm that makes me feel inside to know that our Bayfield Bunch blog had largely been responsible for leading Pat & Nancy to this quiet retirement property in Arizona’s scenic San Pedro Valley.  Something we did, led directly to someone else’s happiness.  Now, how nice is that at the end of a day:)) 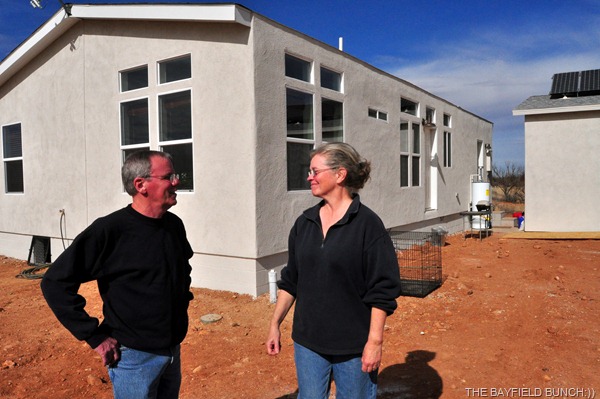 PAT & NANCY, JANUARY 2012…NO PORCH ON THE HOUSE YET BUT YOU CAN SEE SOME OF THE SOLAR PANELS ON THE GARAGE ROOF 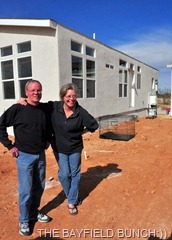 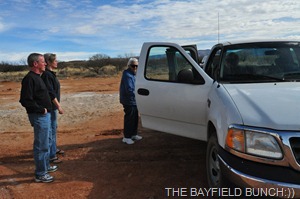 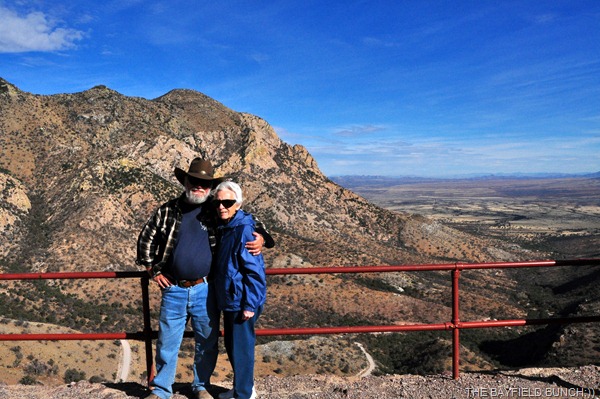 LATER THAT DAY WITH AUNT JEAN ATOP CORONADO PEAK…AND YES YOUR RIGHT, THAT’S A WATERMELON I HAVE STUFFED IN MY T-SHIRT FOR LUNCH LATER:))

What a great spot they have with scenic views of the Dragoon Mountains to the east, south-east to the Mule Mountains, south-west to the Huachuca Mountains & west to the Whetstone mountains .  Pat just sent me the following two photos which shows a newly added surrounding porch.  And, if I remember correctly, this is all being run on solar power from a large garage roof mounted bank of solar panels located at the east side of the house.  Never a lack of sunshine in Arizona:))  And, as a footnote…..sure hope I got all my facts straight in this story because I sure had to scramble through a lot of old dusty cobwebs to remember everything & where all the photos were hiding…. 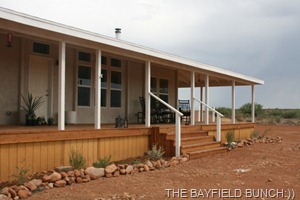 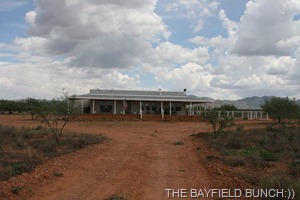 And, on another note, I enjoyed, and am in full agreement with Debra's post over at FIND AN OUTLET. No candy coated stuff going on here again as Debra steps up & tells us what she thinks. And again, as many times in the past, I have thought the exact same way she does about things.  I have a lot of respect for people who are able to think realistically & even more respect for those who can take that kind of thinking & lay it out for others to read & think about............ This time she writes about all those so called, 'Self Help' books that keep piling onto the market from time to time.  Couldn’t agree with you more Deb…..:)) 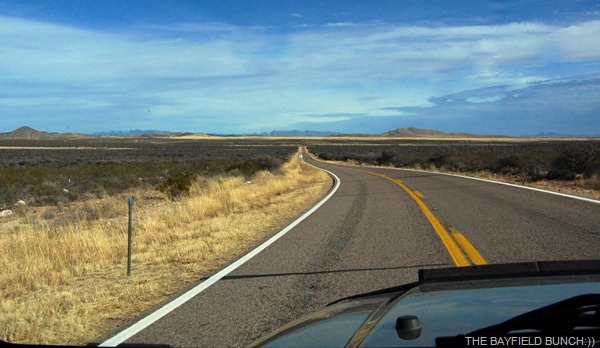 YEP, SOME MIGHTY NICE COUNTRY DOWN THERE IN SOUTH EAST ARIZONA & THIS WHOLE AREA WILL ALWAYS REMAIN IN MY FONDEST MEMORIES

GROANER'S CORNER:(( In Canada's Newfoundland the Newfies have finally solved their own fuel problems. They imported 50 million tonnes of sand from the Arabs and they are going to drill for their own oil. Those Newfies are pretty smart eh:))