WORD CAME TODAY AN OLD FRIEND HAS PASSED AWAY 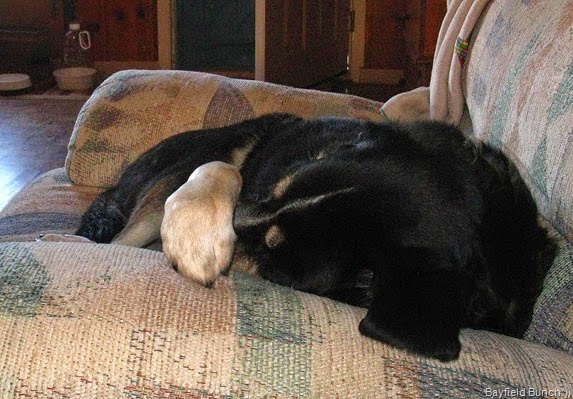 BASHAS' supermarket in Wickenburg had a Thanksgiving Day dinner deal going today.  Turkey, dressing, & all the fixins come in containers to be taken home & heated up.  We were in the Jeep & off to Bashas to pick up our Thanksgiving dinner about 9:30 this morning.  Nice to get out of the house & see some scenery going by the window.  Half a cart load of groceries & we were home again by 11.  Yes we do have a 21 pound frozen turkey in our freezer but Kelly said we’ll save that for another time when she’s feeling up to preparing a big turkey dinner.  Update:  The turkey dinner from Bashas’ turned out to great & we came away with no complaints:)) 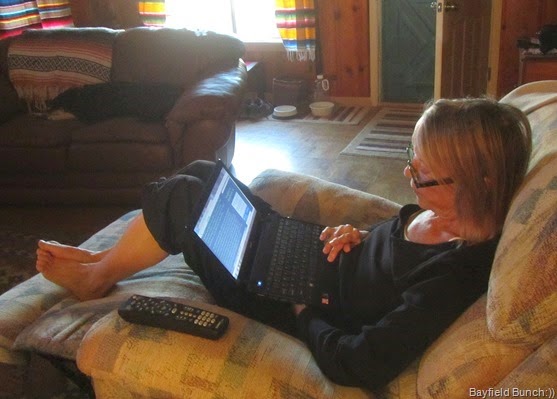 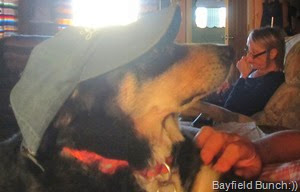 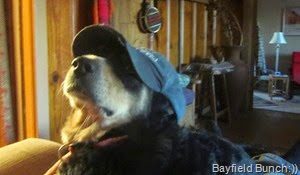 YUP GOT MY DAD’S HAT ON 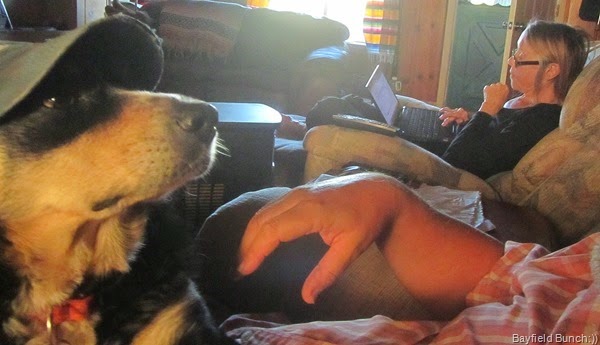 I am well into my latest Kindle book, UNBROKEN by author Laura Hillenbrand.   It is described as a World War II story of survival, resilience, and redemption.  From the first few pages I could tell it was well written & that writing style has continued consistently through the book so far.  These are the types of reality books I enjoyed so much years ago.  I’m not a reader of fiction. 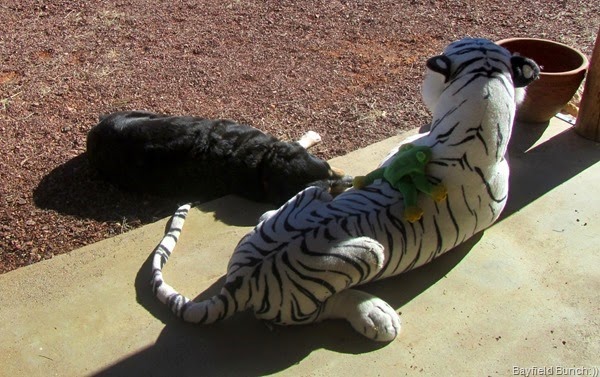 RELAXING AFTERNOON ON OUR FRONT PORCH

We have a nice shaded porch on the front of our house & it’s a great place to sit, grab some zzzzz’s, do a little reading, or just sit quietly & watch the world roll by.  It was especially nice doing all of the above this afternoon with a nice southwest breeze cooling our 80 degree temperatures. 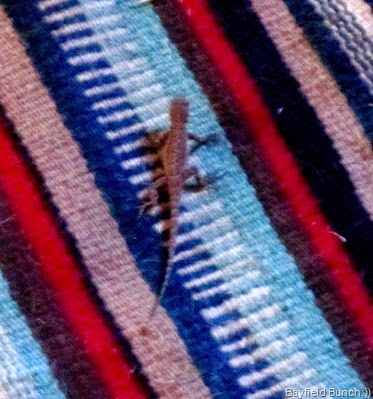 <<< NOTICED THIS LITTLE FELLOW ON MY BEDROOM MAT THIS AFTERNOON

Later in the day we could hear loud voices out front on Ghost Town Road.  An old 1981 school bus painted pea soup green was angled off into our neighbor’s driveway.  Recognized the old beater of a bus right away as the fellow who had made Kelly’s walking stick last March.  His name is Arky & it was while Kelly was picking up her walking stick that day a three & a half foot Diamond Back Rattlesnake came slithering up to them.  You can read about that encounter here…..KELLY'S CONVERSATION WITH AN ARTISAN.  But back to today…….Arky & his friend Barbara were headed on back to their desert camp at the end of Ghost Town Road when his old bus just quit & rolled to a stop in front of our house.  That’s when we heard all the loud talking as Arky talks quite loud.  They had 3 little dogs with them plus more dogs back at their camp & Barbara was worried about them.  Kelly fired up the Jeep & drove Barbara the half mile up the road to their boondocking site.  Luckily our neighbor Rick across the road came out & with a length of chain was able to hook his pick-up truck to Arky’s old bus & tow him back to his camp.  Luckily Arky is one of those handy mechanical fix everything guys so didn’t seem to worried about what ever was wrong with his old bus.  I gave him our phone number in case he needed us to go get any parts for him. 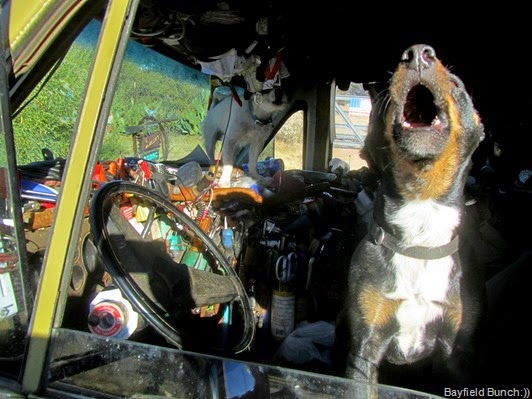 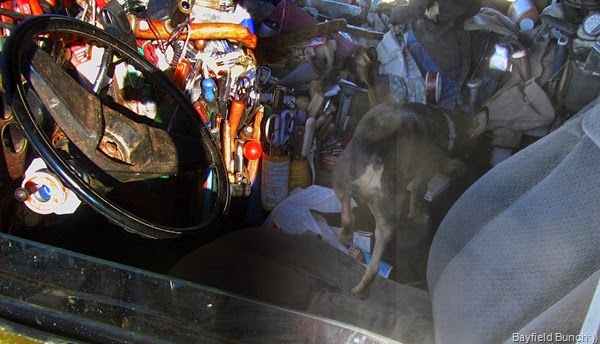 CAN YOU IMAGINE IF ARKY HAS TO REMOVE THE ENGINE HOUSING……….OMG!! 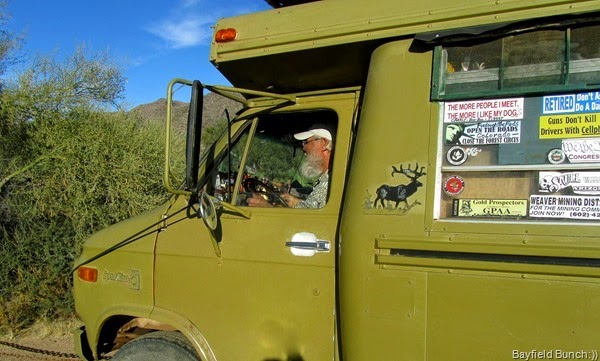 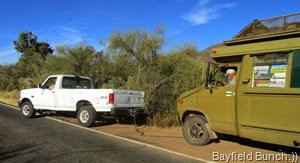 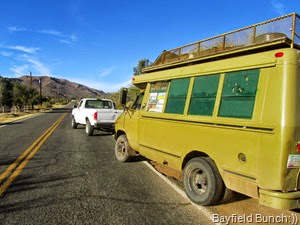 We met Doug & Dolly last winter when they dropped in to see us in Congress.  It was their first RV trip & Doug was so happy to finally be in the great southwest.  Had been a dream of his for quite awhile.  Doug just retired a few days ago & already he has their Class C headed back to the southwest.  Dolly decided to keep the home fires burning so Doug’s off on his own for the winter.  Lots of adventurous travel ahead for him.  MISS ADVENTURE TRAVELS 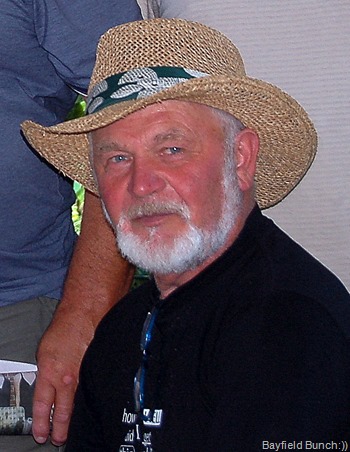 And a sad email from my good friend Jim Eifert in London Ontario late this afternoon.  Readers may remember my post from last September entitled, SATURDAY'S DAY OF SADNESS & LAUGHTER.  Our long time friend Helmut Hell who we had gone to visit that afternoon passed away today.  His long struggle with cancer is over & Jim writes he passed away peacefully in his sleep.  I had known Helmut since high school days.  A hard working fellow who dropped out of high school then went on to own his own brick laying business.  Very financially astute Helmut always knew the value of dollar, had a great sense of humor, was down to earth & was not afraid to tell you what he thought.  Helmut was instrumental back in July of 2010 in reuniting me with some of the old home town Tavistock gang.   I wrote a post about that meeting entitled, SOME OF THE OLD 1960'S GANG GETS TOGETHER.  No doubt Helmut will be greatly missed by family & friends & I’m so glad Jim & brother John & I got to say good-bye to Helmut when we did.  Take take my old friend & if those pearly gates need any brick work done I know you’ll be right at it………….. 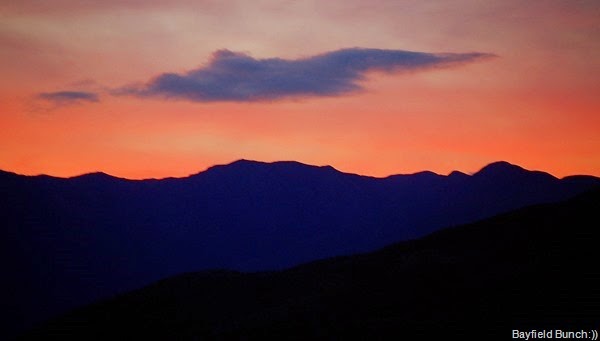 GROANER’S CORNER:((  One morning a local highway department crew reaches their job-site and realizes they have forgotten all their shovels.  The crew's foreman radios the office and tells his supervisor the situation. The supervisor radios back and says, "Don't worry, we'll send some shovels ... just lean on each other until they arrive."