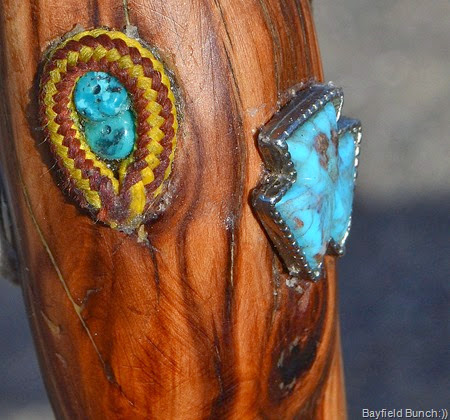 Upon charging up the Kindle Saturday Kelly’s first question to me was, ‘Ok, what books do you want to download’??  Despite knowing we were getting ourselves a Kindle the question still caught me by surprise.  My mind had just not thought about that.  What books to read indeed.  Every time my mind went in search of reading interests it returned empty minded.  Couldn’t seem to get a grasp on the ‘books to read’ thing.  Figured the reason for that was my absence from the book loop for so long.  Occurred to me finally that maybe I had better re-verse engineer my thinking.  What books am I not interested in.  Years ago I my reading interests centered around fiction & I read countless books over the years simply because that is where my interest was.  In latter years my interest in fiction waned.  I have no interest in long fictional novels anymore regardless of who wrote them.  Books dealing with politics is out.  Murder mystery type books whether fact or fiction are out.  Not interested in travel books to exotic locations.  Philosophical books no longer hold my interest either.  So have I knocked out a big percentage of reasonable reading material for myself already?  Maybe, maybe not. 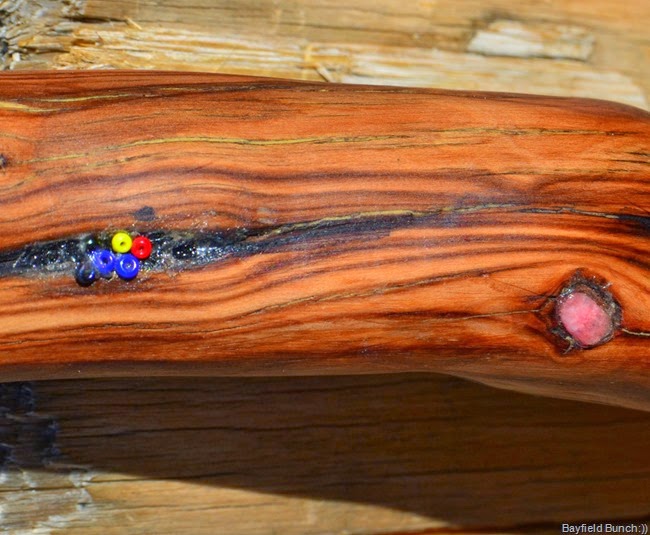 Short Reader’s Digest type of fiction I can handle.  Story telling based on fact maybe.  Factual reading has become important to me the older I become.  Also like to learn something as I am reading.  History, once thought of as kinda boring to me has moved up the ladder.  Just as in movies, whatever I read now has to be believable for me.  Biographies might be a good place to start.  Area history I find interesting.  History of an area I am not in or not likely to be in…..not so much.  Until I am actually planning on visiting an area or actually walking through an area my interests are limited.  For example I’m not going to read about the Florida Everglades if I am never going to be in the Florida Everglades.  It’s just the way I am.  No interest in reading anything about Polynesia or the Philippian Islands because it is highly unlikely I will ever be there.  Ok, so where does all this leave me so far??  Still scratching my head that’s where. 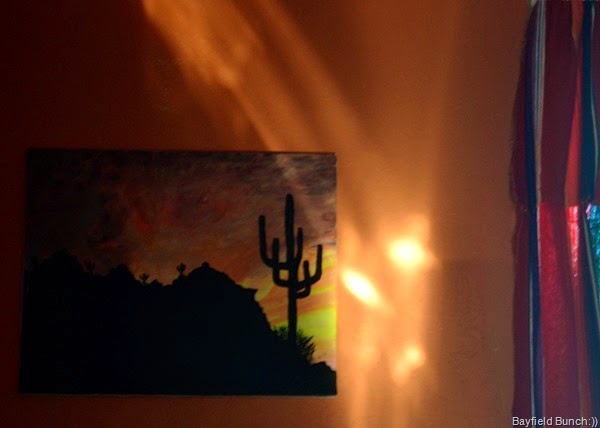 Hard to separate all the nonsense from cold hard facts in U.F.O. sightings but I do find the subject intriguingly interesting.  One of the last books I ever read cover to cover dealt with this subject & that book still sticks in my mind.   Speculation mixed with a healthy dose of fact & common sense, sprinkled with perhaps a bit of myth & legend held my interest all the way through the book.  Thanks to my poor memory I cannot remember the name of that book but it started with the Roswell Incident.  Anyway, I guess I have just told myself my reading interests lie somewhere along the lines of factual history, biographies, & realistic happenings that may or may not go bump in the night.  Ok, where should I start looking????

A new solar system for John & Nan from TRIPPIN WITH THE TALLEYS this past week in Quartzsite.  After solving some 10 year old battery problems they went ahead with the solar installation & sounds like they are quite happy with the fellow who did their install. 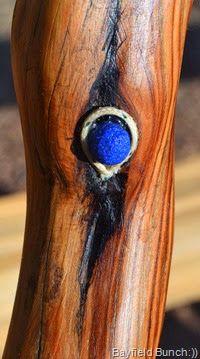 Chinle over at SPOTTED DOG RANCH after much indecision has finally made……’a decision’.  Not so much for herself as for Bodie, Spice, Rowdy, and Callie.  And not just those 4 guys but I think the Canine crew is going to love the change as well.  I’ll give you a hint…..might have something to do with a future room full of sun:))

Called Aunt Jean tonight & she’s doing good.  A little difficulty breathing some days with the humidity present over there in that Florida place but she is still making it to the golf course most Tuesdays.  She was curious as to why I had moved that umbrella clothesline Saturday.  Told her it was twofold reason.  Didn’t like looking at that thing right outside our  back door but more importantly it now makes it much easier for us to drive the rig around behind the house to dump our tanks when returning from our little side trip travels.  We have a dump station close to the house but with the that clothesline thing there it made it difficult to get the rig close enough to the dump pipe without running into the clothesline.  Much better now & we could probably almost get a 40 footer in there…….if we had to. 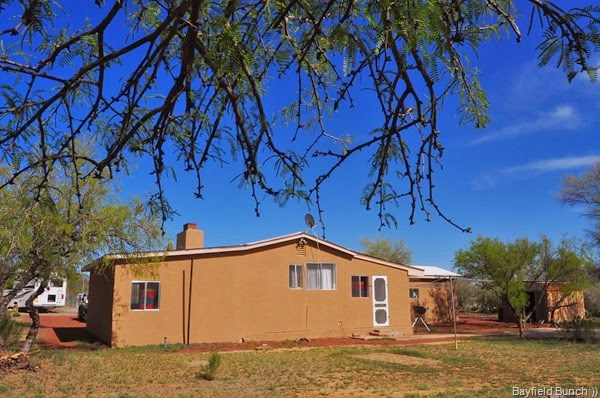 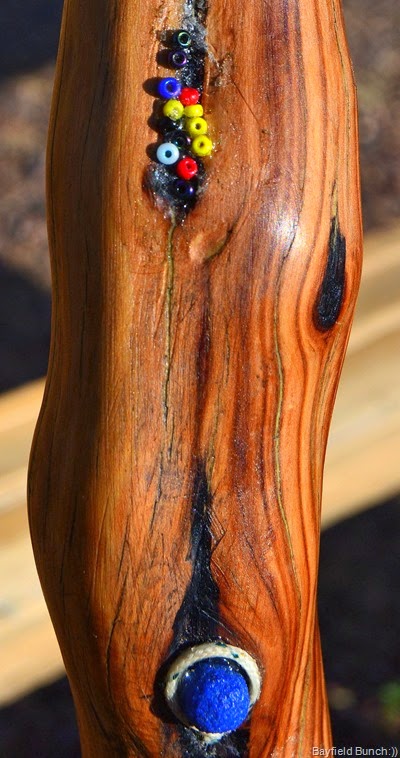 Arky makes walking sticks.  Don’t know his real name but he lives with a lady friend in the desert out the other end of Ghost Town Road.  They spend their winters here & their summers somewhere in Colorado.  The two of them somehow manage to travel between these two places in an old short based home painted school bus & a kind of aging army green cube van.  They drive separately in tandem with each one towing an old homemade trailers.  Arky’s an army Vet with a mechanical background.  Not much is known about his lady friend.  We’ve seen his green van coming & going past our place the last couple years but never knew anything about him until Kelly ran into him a week ago at a garage sale just down the road.  He was dropping off some walking sticks. 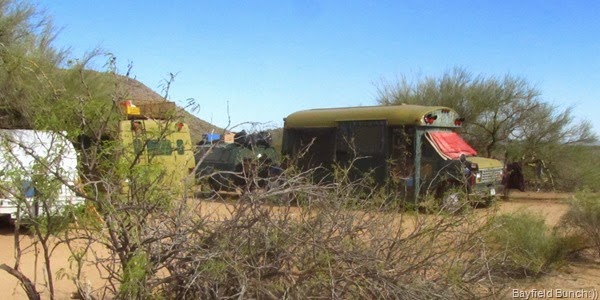 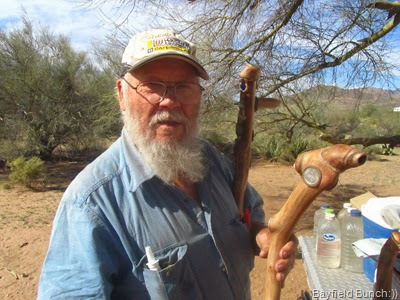 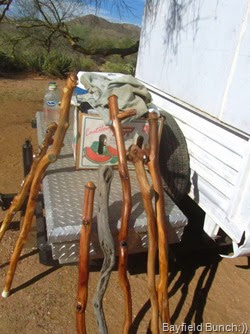 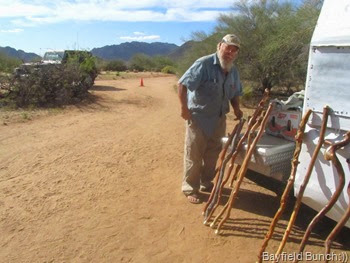 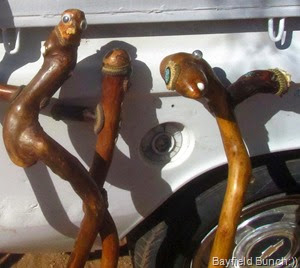 Kelly has been on the look-out for a good MANZANITA walking stick for quite awhile now & as it turns out Arky just down the road from us hand crafts them.  He didn’t have any Manzanita sticks with him but told Kelly to come down in a couple days & he would have one for her.  Saturday afternoon she drove the short distance to the BLM land near the old cemeteries & sure enough he had a Manzanita walking stick finished for her.  The linseed oil finish was still fresh.  Arky puts a lot of work into his sticks & like many of his fellow craftsmen is very proud of his finished product.   He was showing Kelly how he first has to shave the outer gray bark off the dried Manzanita when their conversation was suddenly interrupted by something moving not far away on the desert floor.  Arky immediately hollered to his lady friend, “get the dogs inside…..Rattlesnake”!!!!  Kelly looked in the direction Arky pointed but without her glasses she thought it was just a stick.  Within seconds Arky had his shotgun in hand & with one shot the approaching snake was quickly dispatched.  Kelly had my Canon point & shoot camera with her & prior to the snake’s arrival had been taking some pictures of Arky & his walking sticks.  She did take some photos of the dead Rattler but I chose not to include them in the post.  Not a pretty site after a shotgun blast.  Nina had just encountered a Rattlesnake out there in that same area about a week ago.  Arky said that was the third one to come into their campsite.  Needless to say Kelly was pretty excited by the time she got home.  Arky also said with the snakes active now it’s about time they start packing up & rolling out for Colorado.  Needless to say we have curtailed our morning desert walks for the season.  Many of the photos in today’s post are close-ups of Kelly’s new walking stick. 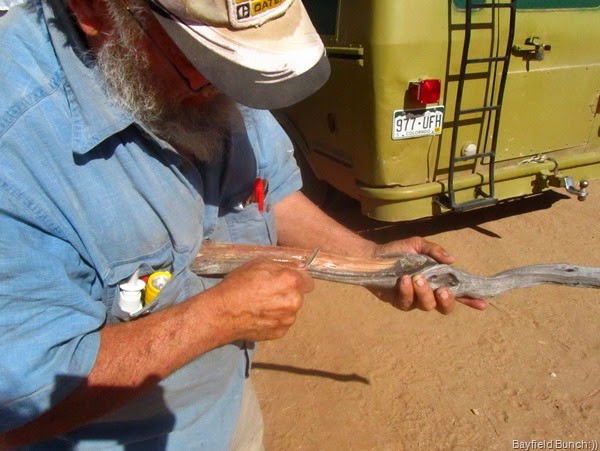 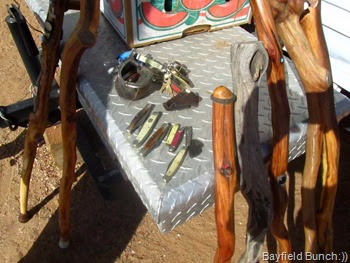 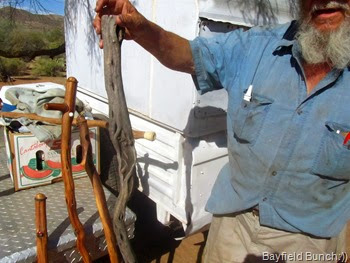 MANY JACK KNIVES ARE TOOLS OF HIS TRADE 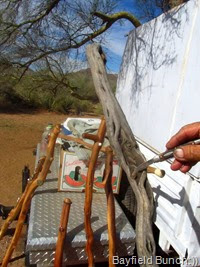 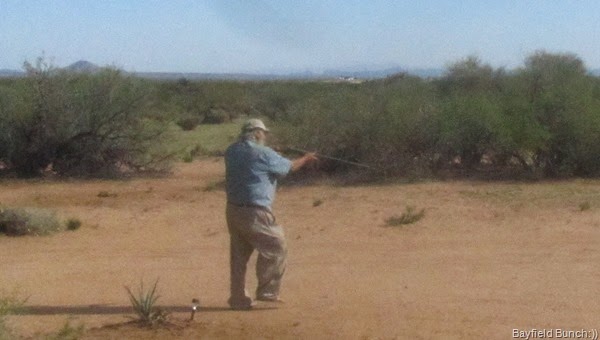 Kelly now has her own personalized Manzanita one of a kind walking stick made by a true desert dweller Artisan from just down Ghost Town Road.  A neighbor if you will. 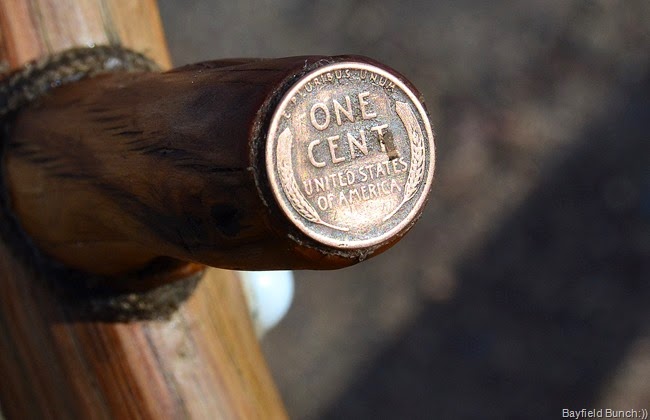 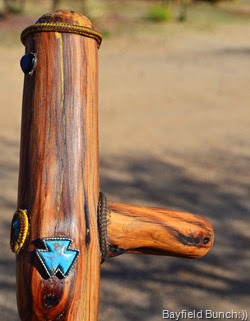 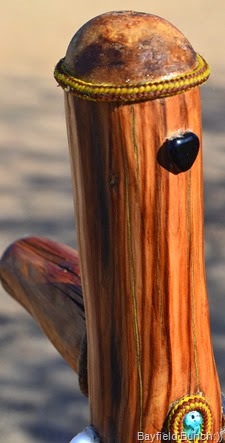 GROANERS CORNER:((  Barry and Hannah, an old married couple,  are sitting on the couch watching TV. On the show they were speaking about how to prepare in case of death etc. “Honey,” says Barry, turning to his wife with a serious expression, “I want you to promise me, that if there ever comes a time that I am dependent on just machines and bottled fluid, that you will make sure to  put an end to it.” “No problem hun,” said Hannah, and she promptly got up, turned off the TV, and poured his beer down the drain.