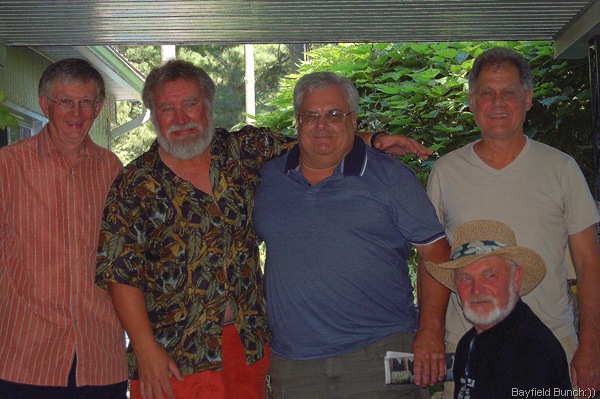 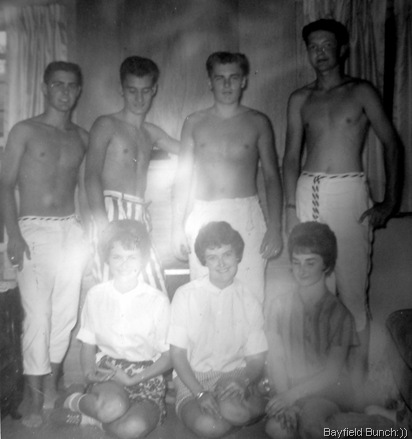 GRAND BEND COTTAGE 1962 (LtoR) JIM EIFERT, AL BOSSENCE, JOHN EIFERT & CRAIG WILKER. The 3 girls had the cottage across the road from us.
Today turned out to be a special day for me which began with an email this past winter while we were in the southwest.  One of the 'old gang' from high school had tracked me down.  We all have best friends from our old high school & beyond days & over time best buddies & pals often drift away & are never heard from again.  But today, thanks to one of the guys, 4 of the old gang were re-united here at our place in Bayfield. 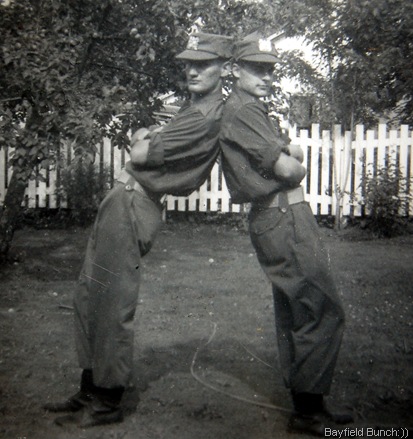 MY BUDDY JOHN & ME IN OUR SUMMER MILITIA UNIFORMS ABOUT 1962....JOHN'S THE GOOD LOOKING GUY ON THE RIGHT
It was quite an afternoon of old memories & stories.  We had all changed over the years but the voices & the eyes were still the same & after a short period of time we all started to look normal to each other again just like we did in the 60's.  Well, sort of.  We had a lot of laughs & remembered a lot of old friends.  Some still here & some gone now. 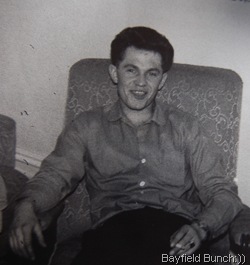 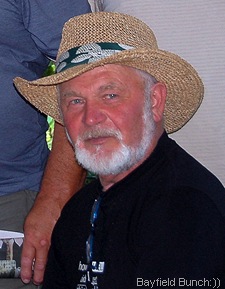 AND THIS JUST GOES TO PROVE THAT SOME PEOPLE DO GET BETTER LOOKING WITH AGE (HELMUT HELL)
Helmut Hell (yes, that's his name) was the fellow who pulled it all together.  Helmut was originally from New Hamburg Ontario & became part of our Tavistock gang in the 60's when he married a Tavistock girl.  Gary Burton was another Tavistock guy along with brother's Jim & John Eifert.  Gary, Jim & John, Helmut's wife, Mary Linda & I all lived within 2 blocks of each other in those days.  Yes, Tavistock Ontario was definitely a small town!! 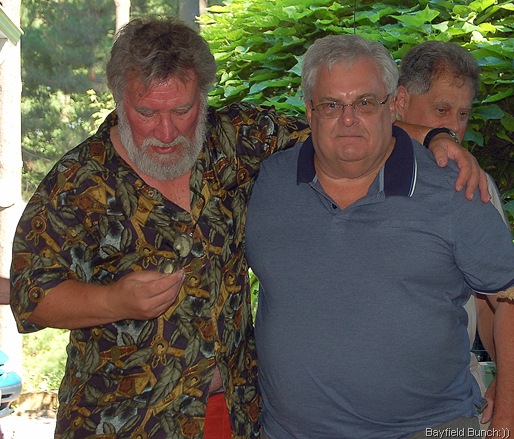 JOHN & I GETTING READY FOR OUR 'BEST BUDDIES' CLOSE UP:))
John was my best buddy of all times as we spent those crazy, wild, difficult, & zany teenage years fumbling our way through first cars, first dates, first drinking bouts, & first......well, you know what I mean.  There were a lot of 'firsts' in those days:))  They were growing up years & they were maturing years.  The were 'American Graffiti' years & for us Canadians they were our Tavistock Ontario years. 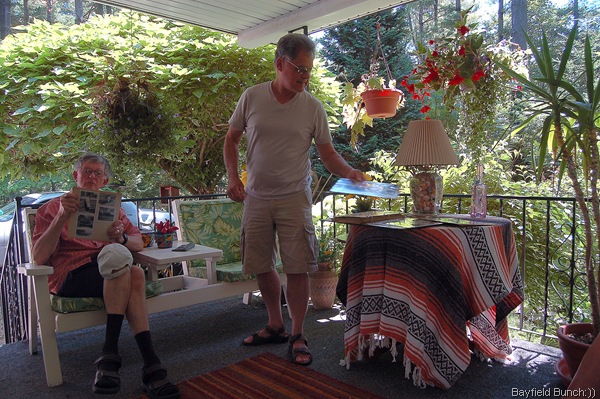 LOOKING AT OLD PHOTO ALBUMS ON OUR FRONT PORCH TODAY....GARY & JIM
Jim I had not seen since the late 60's.  He spent 38 years working for Chrysler in Windsor & retired just a few years ago.  I still remember driving his Mustang convertible back from Windsor the day I dropped him off at his new job & hotel room near the Chrysler plant.  Just found out today Jim ended up living in that room for the next 2 years,  John & I hadn't seen each other for many years either & Gary I hadn't seen since last summer when he rode his bicycle into our driveway one day & knocked on the door.  Turns out Gary lives in Bayfield now as well but at the other end of town.  Strange that we hadn't run into each other in the supermarket over the last few years.  Helmut, (the organizer guy) had surprised me one time back in the mid 80's when he walked up to the counter of the camera store I was working at in Stratford. 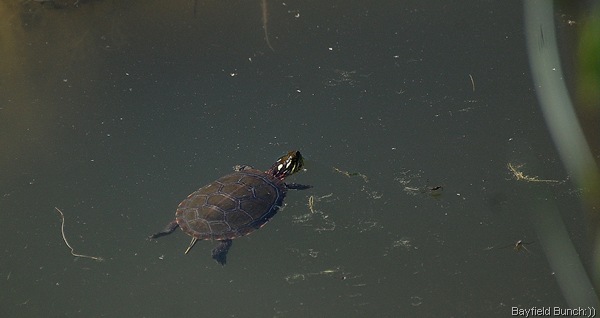 NO, THIS IS NOT ONE OF THE OLD 60'S GANG BUT WE OLDER GUYS KINDA MOVE ABOUT THE SAME SPEED AS THIS FELLOW SOMETIMES
By the late 60's alcohol had a firm grip on my life & I was doing a lot of stupid things. (didn't we all)  My best buddy John had enough of my antics & after awhile we just drifted apart.  All these years since then I have felt bad about those times & a couple of years ago I said to Kelly, of all the people I wished I could say 'sorry' to from those days, John Eifert was at the top of my list.  Today, in my own way & in my own words, I got to finally say 'sorry' to John. 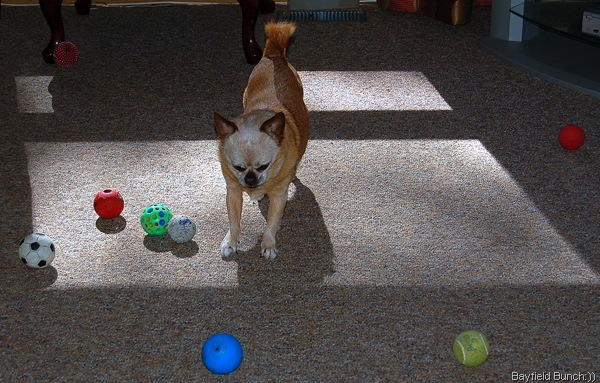 WELL, WHILE THOSE OLD GUYS OUT ON THE PORCH ARE YAMMERING AWAY I'LL JUST STAY INSIDE & PLAY WITH MY TOYS
A big thanks goes out to my buddy Helmut Hell for making today possible & for sure we will all stay in touch & probably meet again.....for round two & three, & if the wives aren't around......maybe round four:))