HOUSE IS ALL PAINTED & VISITORS FROM BUCKEYE 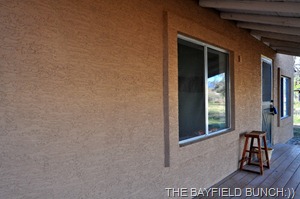 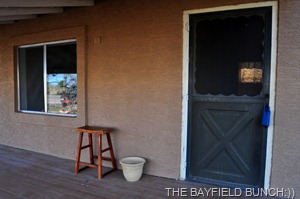 Bear with me folks, in another few days we will be on the road again & that will be the end of all the Arizona house photos until next October. 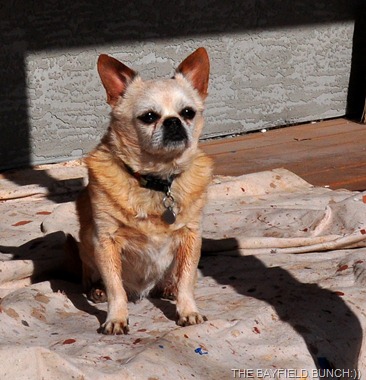 MOTORMOUSE KEEPS AN EYE ON THE PAINTERS

Can’t tell you enough just how grrrrreat it is having a full size shower with an endless supply of piping hot water again.  It is the number one thing I miss most when we leave Ontario every Fall.  We have both a tub shower & a walk in shower here at the Arizona house.  Haven’t tried the walk in one yet…maybe in the morning:)) 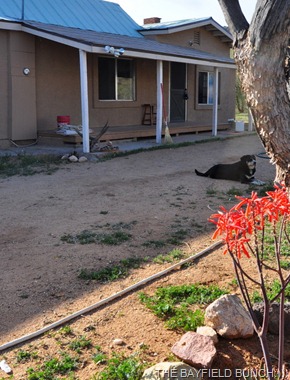 Dobie & the Boys were here early this morning with paint cans & brushes in hand & again didn’t waste any time getting on with the task at hand.  With long handled paint rollers they soon began transforming the house’s Battleship Gray to a Colorado Trail Brown.  Groovy:)) 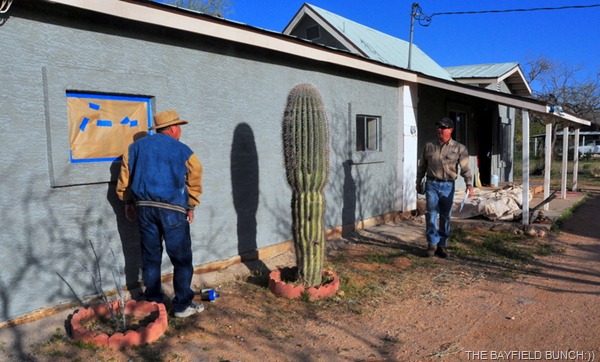 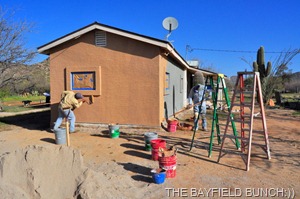 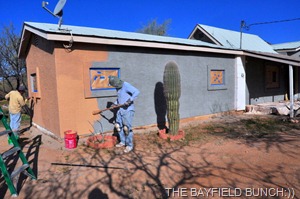 PAINTING IS WELL UNDER WAY

Spent a bit more time in the kitchen doing small touch-ups here & there & we put the last piece of colorful wallpaper trim up.  By 10 a.m. it was getting pretty darn warm out so we piled into the Jeep & headed off to run some errands in Wickenburg. 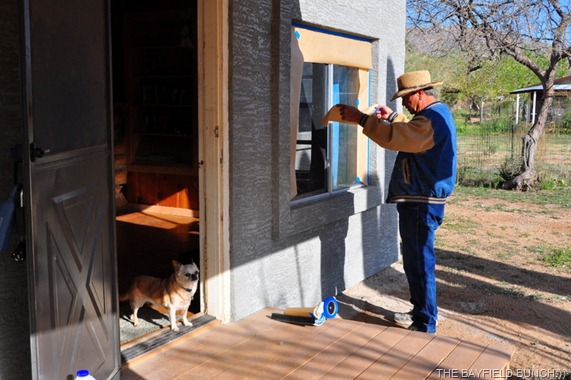 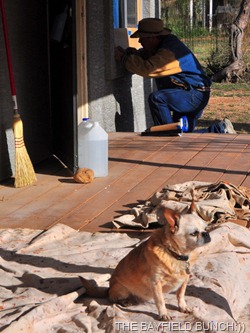 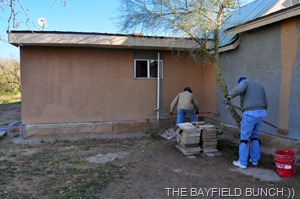 Stewart’s Hardware seems to be our most frequent stop these days & today was no exception.  Cleaners, curtain rods, etc.  From there it was up the road to the Vets.  Kelly wanted to pick up little Motormouse’s medical records from last week.  Good thing to have back in Canada in case Motor has a relapse. 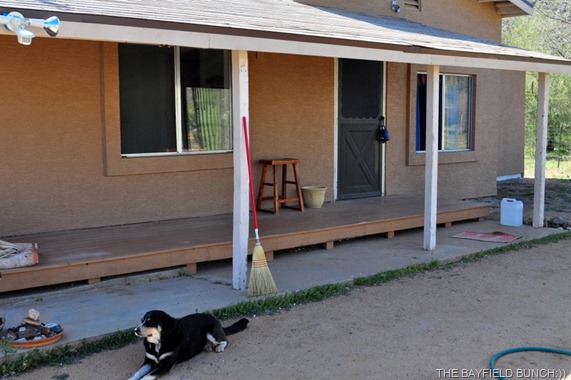 Next stop was just up the road to the newly opened Wickenburg used Home & Appliance Store.  Found us a recliner, a cabinet, a stool & an old cushy loveseat.  It’s going to be delivered Thursday around noon.  For now we’ll just have to take turns in the recliner.  And no, having matching furniture is not important to us at all.  From there it was over to the Arco store for some more ‘stuff’.   Safeway was next & then a final stop at the Bank of America to make sure our $1.49 was still in there.  It was:)) 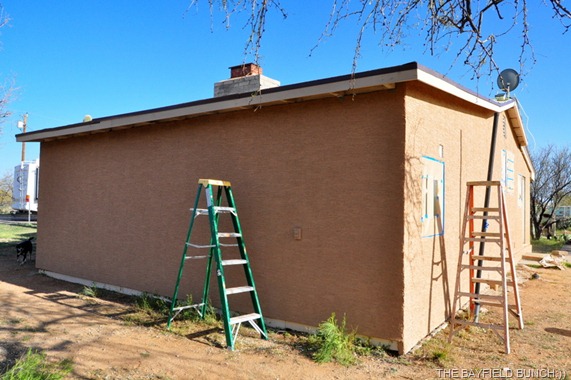 I think we were well over 80F today & you could tell it was hot by the haze in the air.  I was kinda wishing for some A/C in the Jeep on the way back to Congress.  Don’t think I would do to well in the hot summer months here. 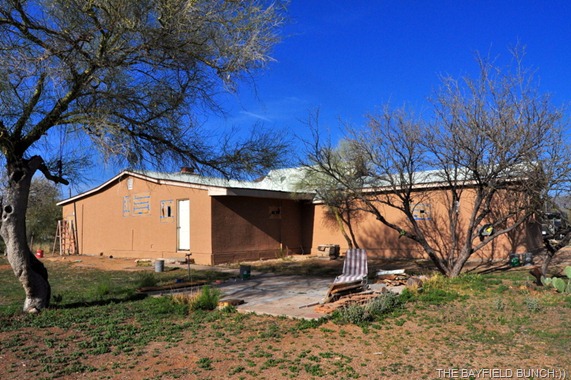 Last time we saw Joe & Nancy from RVING BEACH BUMS was at Sandy’s Restaurant & RV Park in Cochise County’s Sunizona.  We were just east of the Cochise Stronghold.  My blog from that day is HERE.  Joe has been following my blog for a long time now & they were in the area camped near Buckeye.  Upon returning from Wickenburg J & N were at the Arizona house waiting for us.  Great folks & it was nice to see them again.  Had us a walkabout & a catch-up.  Joe & Pheebs even had some smooches going on:))  Joe’s a very handy guy specializing in electrical engineering & said he would be glad to come back for a couple days & help out with any projects we had going on next winter.  And yep, we’ll sure have us some projects going on alright.  Joe & Nancy headed on back to Buckeye around 3 while Kelly & I talked to Dobie a bit about next getting our roof repaired. 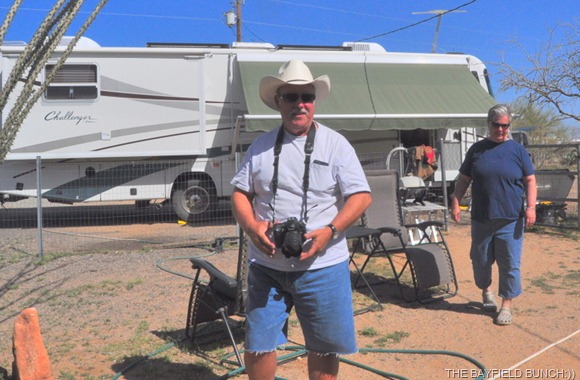 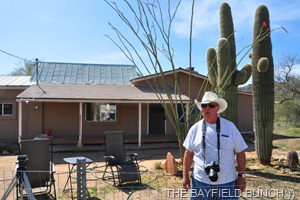 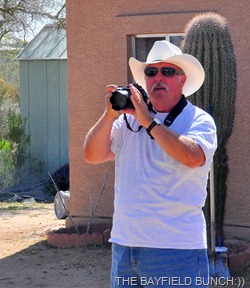 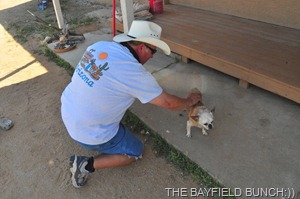 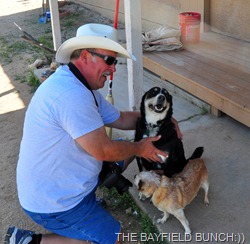 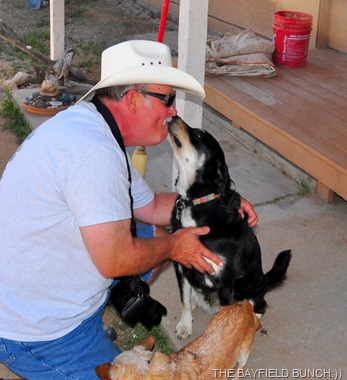 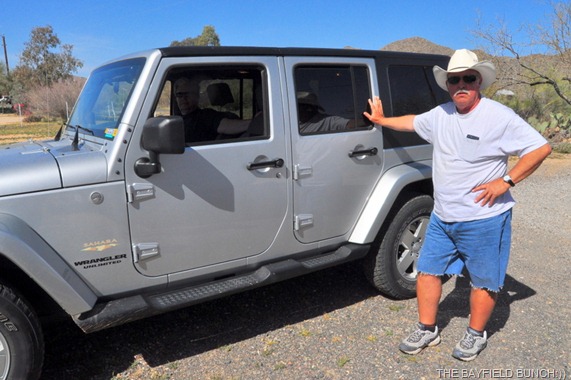 We have two leaks in the old roof with the worst one being being in a corner between the dining room & kitchen.  The other one being in the blue room.  Dobie & the boys are going to scrub down the oxidized metal roof & patch all the seams & any holes they find with roofing tar.  They will then coat the entire roof with white elastomeric paint.  Hopefully this will stop the leaks, but if not, we’ll have to go to option B in the Fall.  Don’t ask me what option B is because I do not have a clue. 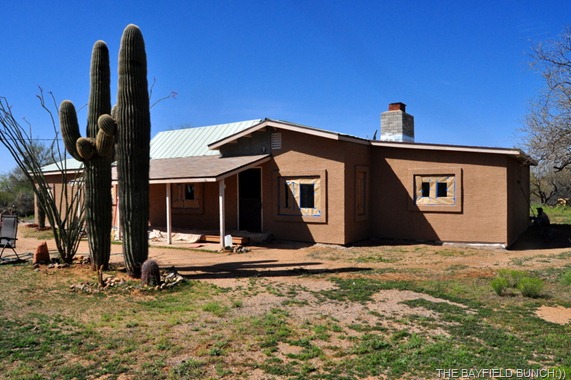 WITH THE WINDOWS STILL TAPED UP

The house is looking great with it’s new ‘Colorado Trail’ paint job.  About 3 hours in the morning will finish up the second coat.  The guys even painted the foundation.  In the Fall I will paint the fascia board & front porch.  Haven’t decided on a color for that yet.  Lime green came to mind but quickly left again:))

RV SUE has left the Congress Arizona area & moved on up the road.  Saw her first Joshua Tree & came across her first desert snake, of which she has a picture.  Also a new RV Park that she was very impressed with & one which we will stop by sometime when we are up that way north of Wickenburg & south of Kingman.   HIDDEN OASIS RV PARK 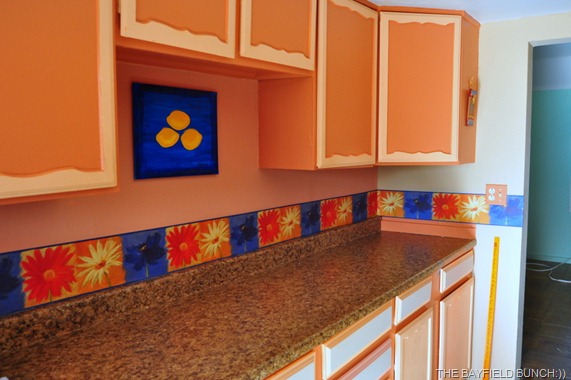 FINISHED PUTTING THE LAST STRIP OF WALLPAPER BORDER ON THIS MORNING & NO, THE CUPBOARDS ARE NOT THAT ORANGE

A few days ago we had new Blog Followers JERRY & LU LARSON join our Followers list but I couldn’t get their blog site up & running at the time.  Working now:)) GROANER’S CORNER:((  Joe and Frank were in the office, and noticed that someone had put up a suggestion box with some 3 x 5 cards next to it. Both decided that this was a great idea, and each took a card to fill out.
Joe wrote: "The office workers should all be given raises!"
When he looked at Frank's card, it said: "Can we all have raises, and keys to the executive washroom, and personal secretaries, and new company cars, and new coffee cups, and longer lunch breaks, and an extra three weeks vacation each year, and a holiday on St. Patrick's Day, and Columbus Day and Martin Luther King's Birthday?"
Joe said, "Frank, that isn't the right way of getting things changed around here. You shouldn't put all of your begs in one ask-it."