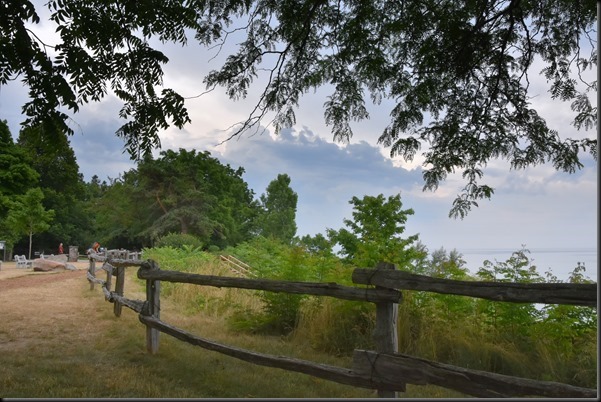 Sorry for all the confusion regarding the posting of my blog Sunday night.  Still a big mystery as to what happened so my fingers are crossed that publishing tonight’s post will go alright.  Some of the dates are mixed up so here is my official Sunday post link..... Oh So That's What Richard And Al Were Up To Last Thursday Morning  Eh. And a big thanks to Kelly for finding it and the other 3 missing posts. 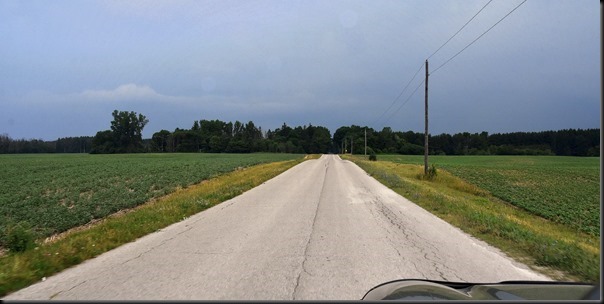 PHEEBS AND I STARTED OFF CHASING A STORM THIS MORNING 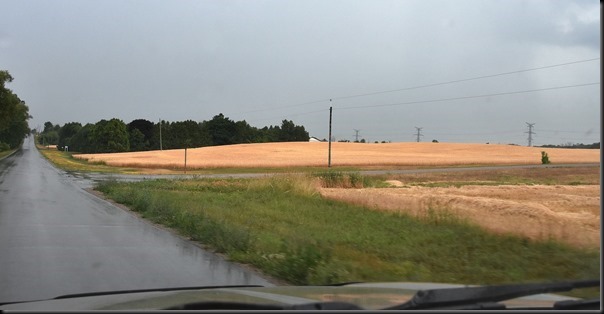 ROADS WET SO WE’RE GETTING CLOSER 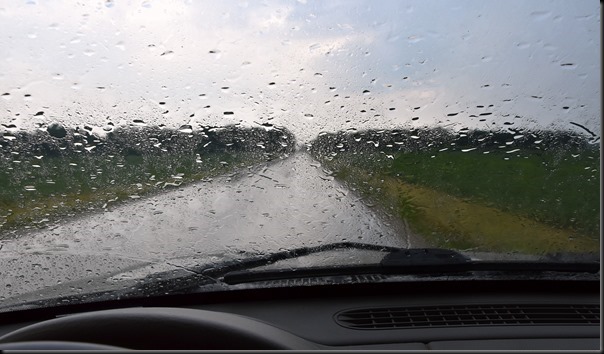 When our A/C kicked on at 7 a.m. this morning I knew that was probably a pretty good indication Pheebs and I would not be out for a walk anywhere.  Kelly said Pheebs was already dragging herself along in the humidity when they were out for a walk earlier.  About 7:30 I heard the first roll of thunder coming in off the lake and a quick check of our live radar weather feed confirmed a storm cell was headed in our general direction.  Half an hour later with more cracks of thunder Pheebs and loaded ourselves into the Jeep and headed north towards Goderich in hopes of catching the storm and grabbing some photos.  Roads turned from dry to wet about half way there and by the time we reached Goodrich the storm had blown through leaving a bucket load of rain behind.  Puddles in the parking lots.  We cruised down around the harbor and despite it raining lightly I was able to get Pheebs out for a short walk close to the Jeep.  Sun popped out in a few spots and the humidity immediately went up so after a couple quick errand stops we headed back home.  It wasn't even 10 o'clock and our outside activities were already pretty much over for the day.  Absolutely hate when that happens!!  Severe thunderstorm watch was issued this afternoon. 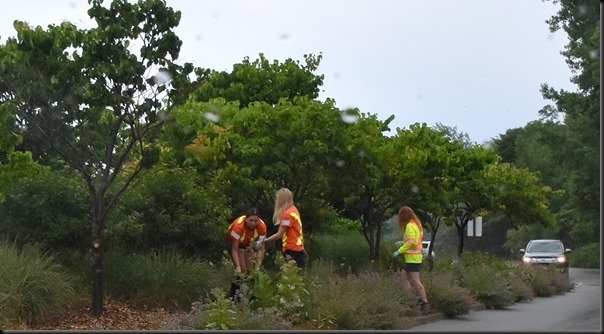 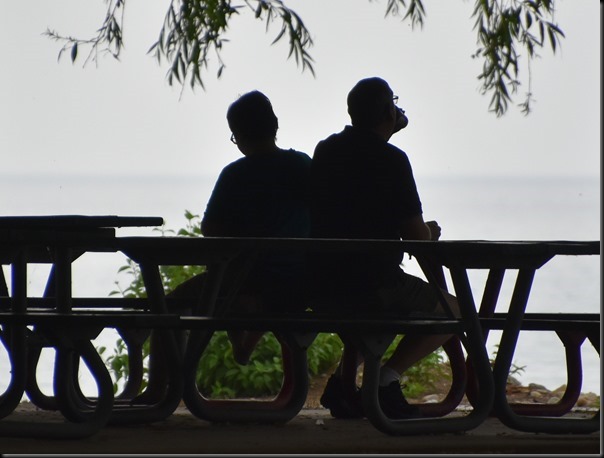 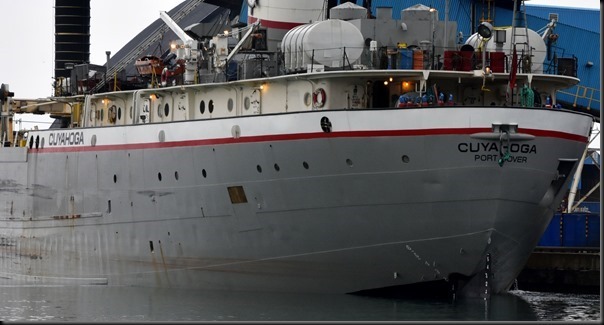 THE CUYAHOGA WAS IN PORT THIS MORNING AND THE AFT SECTION OF THIS SHIP ALWAYS REMINDS ME OF AN OLD TRAMP STEAMER SOMEWHERE IN THE OLD CHINA SEA WITH HUMPHRY BOGART AND LAUREN BECALL ONBOARD ……. CIRCA LATE 1930’S 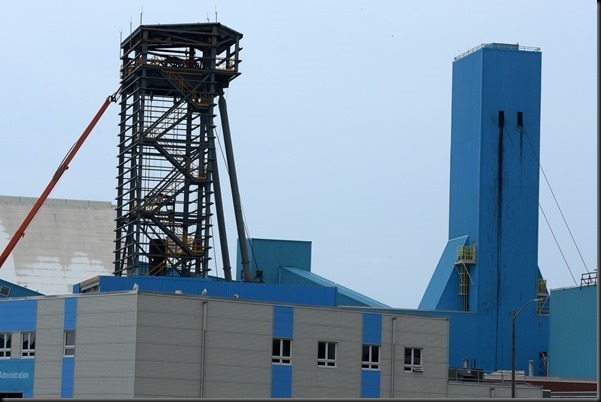 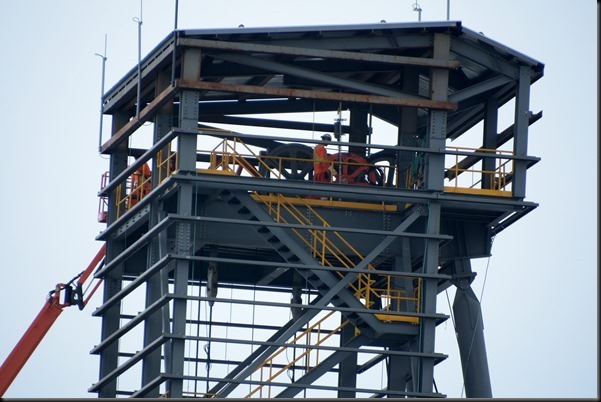 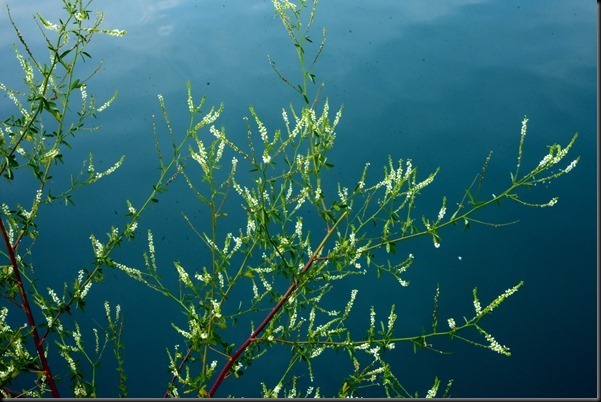 I FELL OFF THE PIER INTO THE HARBOR AND WHILE MAKING MY WAY BACK UP TO THE SURFACE I TOOK THIS PHOTO OF A TREE BRANCH HANGING OUT OVER THE WATER………OKAY, OKAY, SO THAT DIDN’T HAPPEN……IT’S REALLY SOME KIND OF GREEN PLANT GROWING OUT OF A CRACK IN THE DOCK AND BACKGROUNDED BY THE HARBOR’S DEEP BLUE WATERS

With the afternoon thunderstorm watch in mind I checked our live radar feed and saw storm cells forming up over Eastern Michigan and starting across the lake.  One appeared headed for Bayfield so I grabbed my camera and headed on over to Bayfield's Pioneer Park hoping for some ominously dark storm cloud photos.  I did get a few shots but not the big dark menacing tornado laced ones I was looking for.  Ended up coming back home after half an hour. 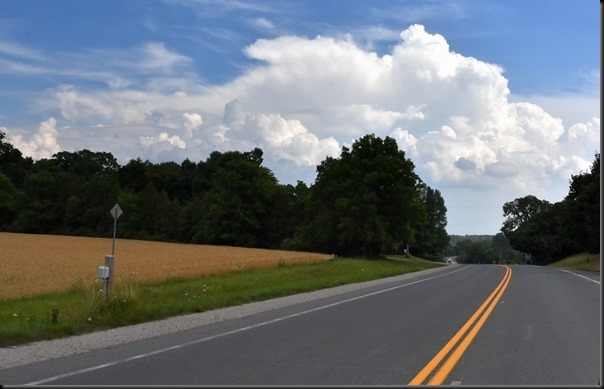 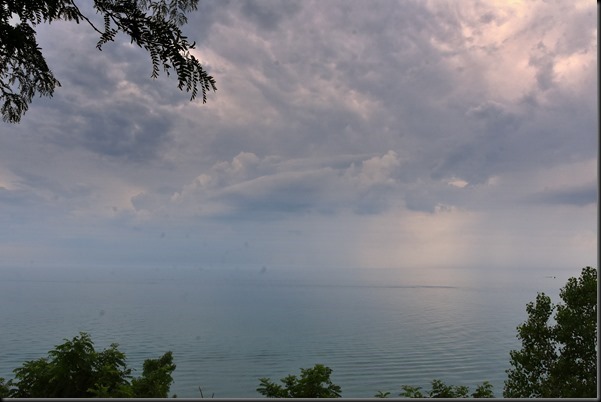 STORM CLOUDS GATHERING OVER THE LAKE TO THE WEST 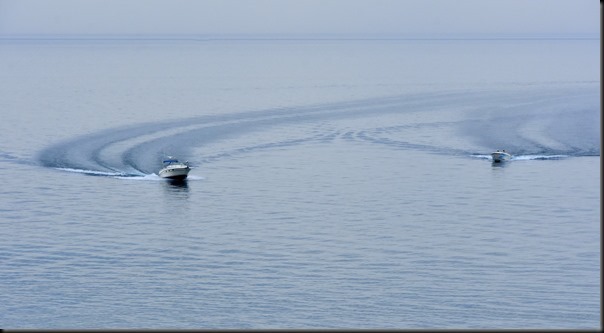 WITH THE FIRST PEELS OF THUNDER BOATERS HEAD FOR SHORE 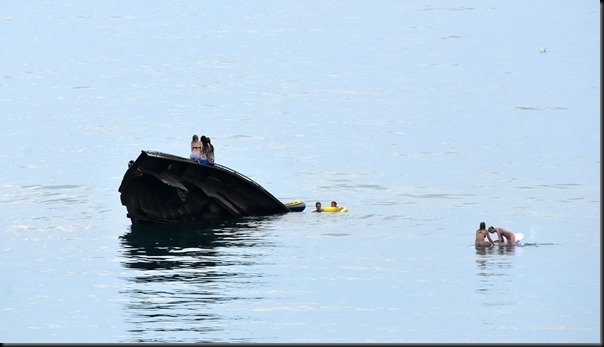 THESE TEENERS  GATHERED ON THE HULL OF AN OLD SHIPWRECK HAVING FUN OF COURSE AND COULDN’T CARE LESS ABOUT A POTENTIAL STORM ….. STORM SCHMORM WHO CARES 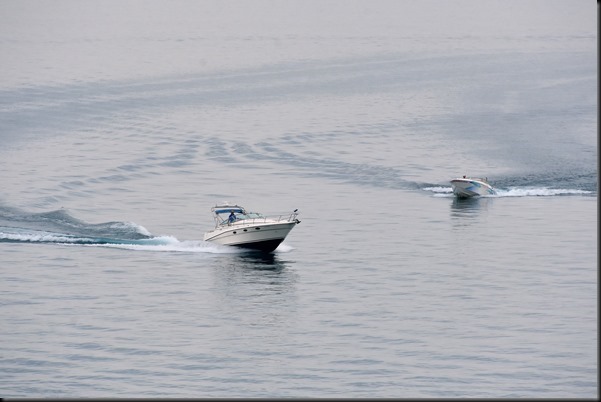 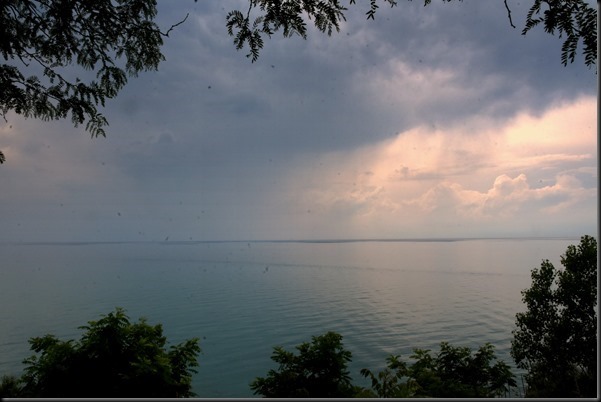 WHERE ONCE THE LAKE AND SKY WERE ONE I NOTICED A PENCIL THIN DARK BLUE LINE FORMING ACROSS THE HORIZON….OH-OH, MAYBE A SUNAMI WAVE??

TOOK ME A FEW MINUTES TO FIGURE OUT WHAT IT WAS 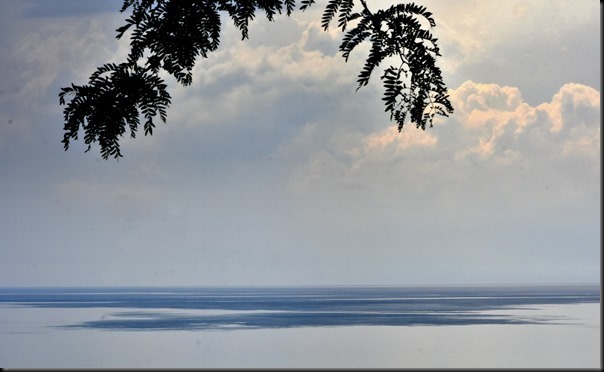 SLOWLY APROACHING LAND IT FINALLY DAWNED ON ME WHAT WAS HAPPENING 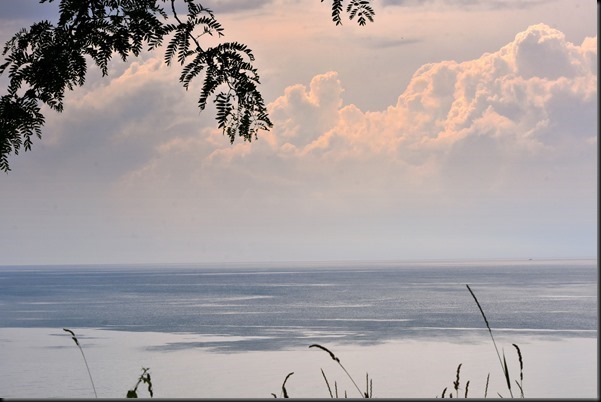 WIND ON THE WATER BLOWING IN AHEAD OF THE STORM 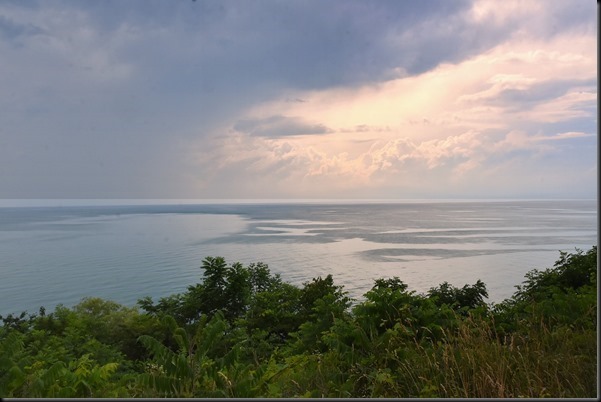 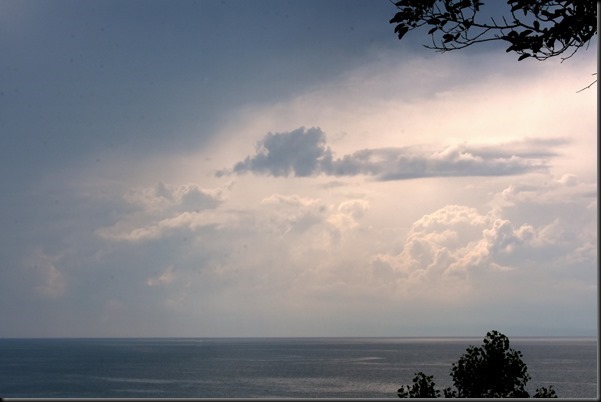 Well I just went and did what I had set out not to do.  I did not want to write this post with a lot of photos in it in case it didn’t publish again tonight.  Well, I haven’t ever been very good at listening to myself so here goes……………….. 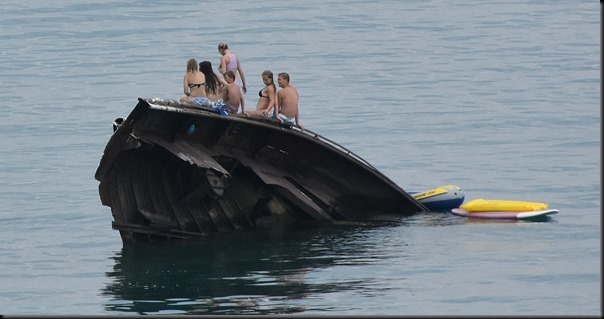 GROANER'S CORNER:((  Jon's working at the lumberyard, pushing a tree through the buzz saw, and accidentally shears off all ten of his fingers. He goes to the emergency room.  The doctor says, "Yuck! Well, give me the fingers, and I'll see what I can do."  Jon says, "I haven't got the fingers."  The doctor says, "What do you mean, you haven't got the fingers? It's 1998. We've got microsurgery and all kinds of incredible techniques. I could have put them back on and made you like new. Why didn't you bring the fingers?"  Jon says, "Well, heck, Doc, I just couldn't seem to pick 'em up."

A man and his wife were making their first doctor visit, the wife being pregnant with their first child.  After everything checked out, the doctor took a small stamp and stamped the wife's stomach with indelible ink.  The couple was curious about what the stamp was for, so when they got home, the husband got out his magnifying glass to try to see what it was.  In very tiny letters, the stamp said, "When you can read this without a magnifying glass, come back and see me."

Why does the bride always wear white? Because it's good for the dishwasher to match the fridge and  stove.