OH, SO THAT IS WHAT AL AND RICHARD WERE UP TO 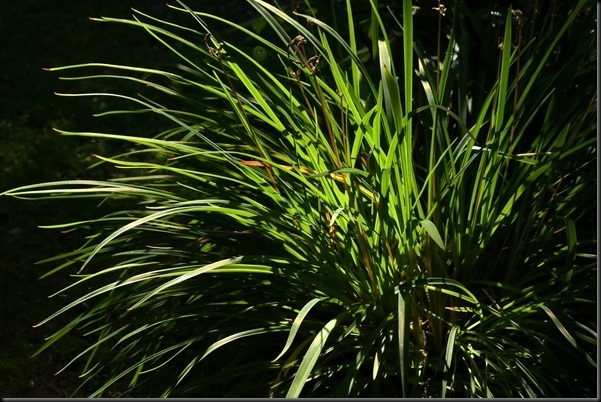 It’s a long walk from our house to our good friends Richard and Gayle's house and it took us all of 35 seconds to make the arduous flat walk journey this morning.  Now that the deal is done I can tell you they have bought themselves a 2002 32’ Georgetown Class A Motorhome.  And that’s where Richard and I were this past Thursday morning when I was a bit secretive as to what we were up to.  I didn’t want to let the cat out of the bag until it was all a done deal.  It was just the absolute right priced Motorhome for the absolute right minded people at the very absolute right time.  A big huge thank you goes out to Ron Krauter from Four Seasons Performance in Grand Bend for making this ‘great deal’ happen for Gayle and Richard.  Just a super knowledgeable and caring guy and if anyone is looking for honesty and integrity in buying an RV Ron is your guy to talk with.  We’ve known Ron over 11 years now and have never met a fairer or nicer person to do business with.  If you happen to drop in there just tell him the ‘Bayfield Bunch’ sent ya:)) 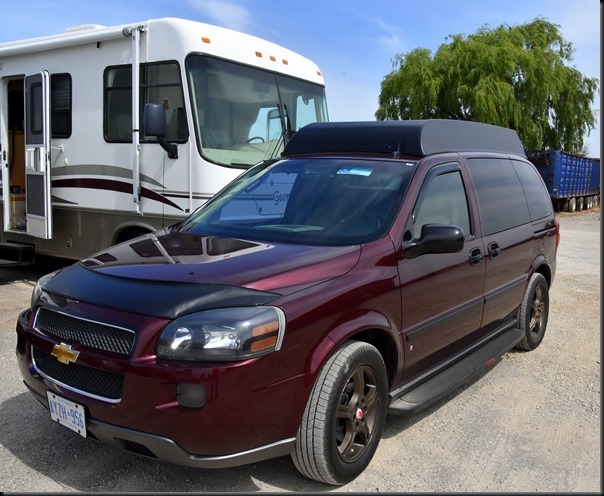 IN PARKHILL ONTARIO LAST THURSDAY WE LOCATED THE MOTORHOME, JUMPED OUT OF RICHARD’S VAN LIKE A COUPLE EXCITED TEEN-AGERS AND HAD US A LOOK SEE 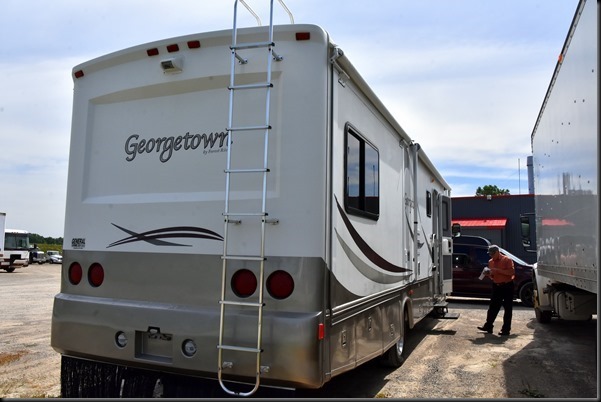 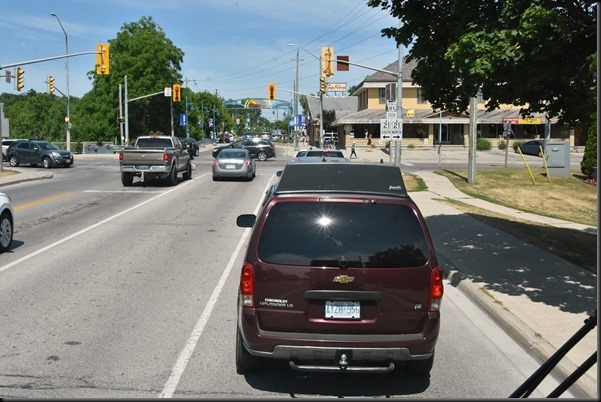 RICHARD DROVE THE RIG TWO THIRDS OF THE WAY BACK TO GRAND BEND AND I DROVE IT THE LAST THIRD….HERE I AM IN THE RIG WITH RICHARD LEADING THE WAY 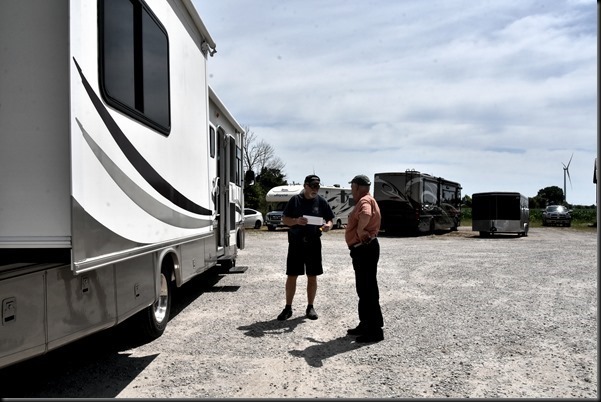 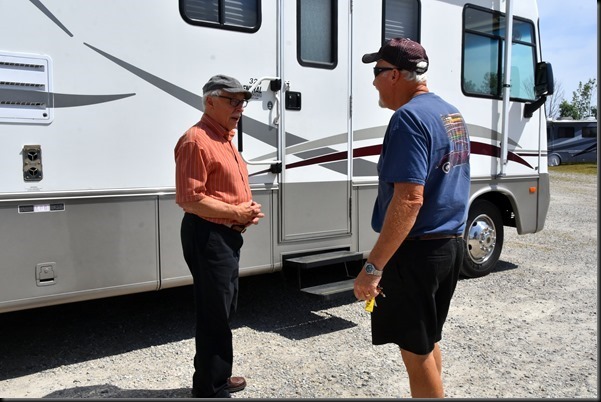 RICHARD ON THE LEFT AND RON ON THE RIGHT

Needless to say there’s lots of excitement over at Gayle and Richards right now and we had ourselves a long coffee break with them in their Georgie Motorhome this morning.  Kelly hadn’t seen the rig so a tour was in order.  I had seen and driven the coach part way when Richard and I picked it up in Parkhill Ontario Thursday and brought it back to Ron’s place in Grand Bend.  Their Georgetown is almost identical to our Triple E Commander in graphics and color.  Richard and Gayle are not new to RVing having had a couple Class C RV’s years ago as well as a new Monaco.  They are so much looking forward to the freedom of the open road again. RICHARD ROLLS INTO THE PARK WITH THE BIG GEORGETOWN FRIDAY NIGHT 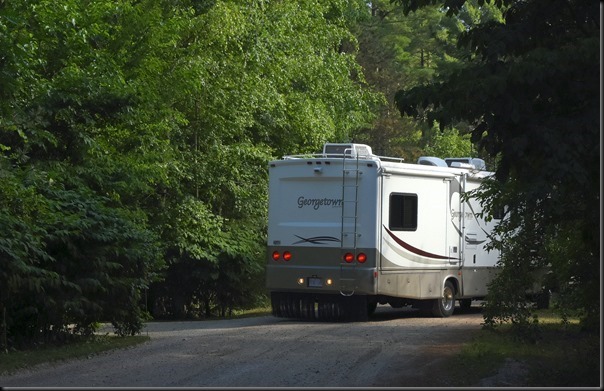 BACKS IT INTO THEIR DRIVEWAY 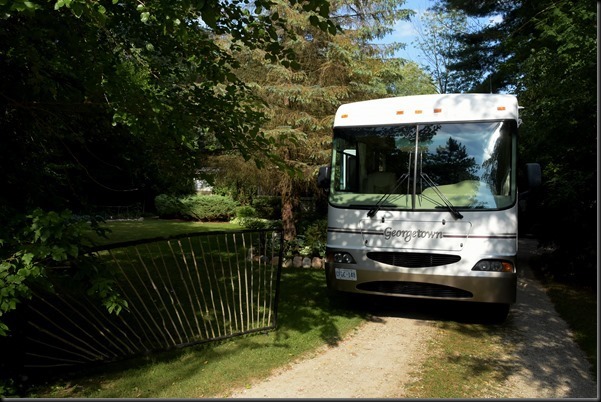 Not wanting to spend any time outside due to the heat today I used my indoor time constructively on the computer to geographically travel myself to a number of places we have never been but will be traveling too in a couple months.   Checking ahead along our route for State Parks, Passport America Parks, Points of Interest, scenic bi-ways, etc, I have started computer files on South Dakota, Wyoming, Montana, Idaho, Oregon, and northern California.  Checked out average temperatures for September and October in various areas along the way and I was happy to read they consider it the ‘off season’ out there.  Hopefully less people and traffic.  Last time we traveled through South Dakota four years ago from north to south we did see Mount Rushmore but missed the Badlands and other area attractions.  Stayed at a nice little RV Park in Sturgis for a couple days but Kelly was feeling sick and I wasn't feeling much better so we pulled up stakes, pointed the rig’s nose south, put the pedal to the metal, and headed straight for our house in Congress which we had at that time.  We plan to travel differently this year from recent years in that we hope to make more use of RV and State Parks along the way.  Less Walmarts.  And because most of our travels will be through areas we have never been we hope to spend more time sightseeing along the way like we did in our earlier RV travels. When we reach Oregon we plan to do the coastal route from north to south down into California.  In hindsight I wished we had thought to do this trip last winter then this year do Idaho and Oregon's interior.  Oh well, maybe if this winter goes alright we could think of that next year.  And there I go getting waaaaaaay ahead of myself again..…….:)) 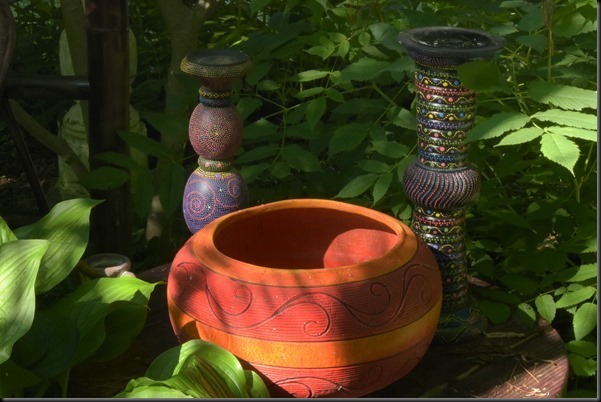 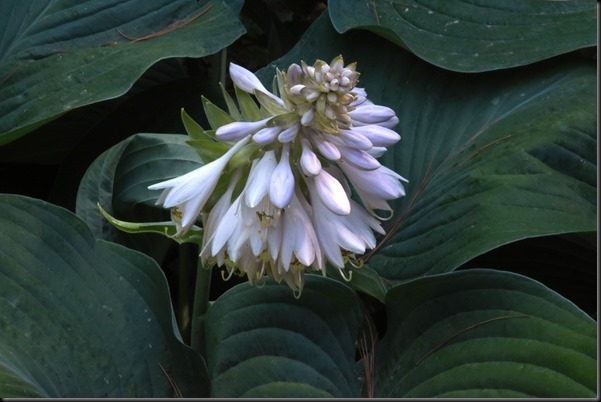 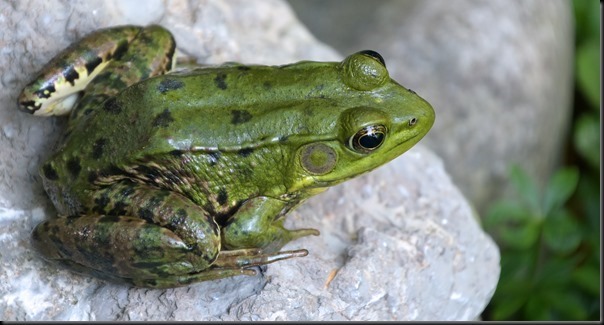 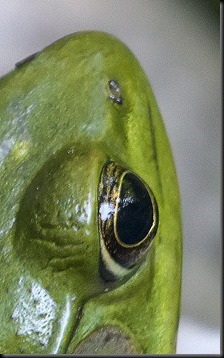 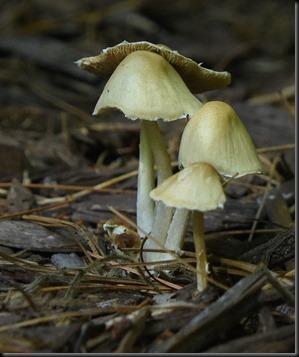 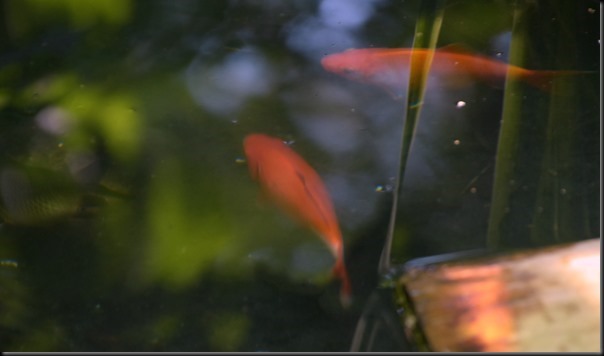 TWO OF OUR THREE POND FISH 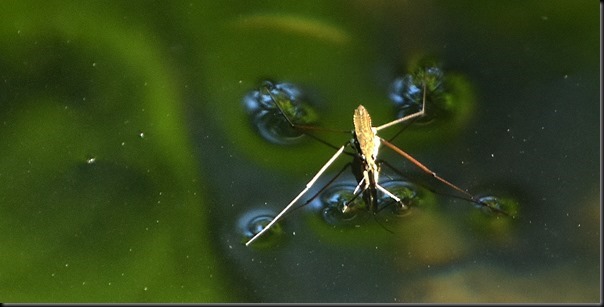 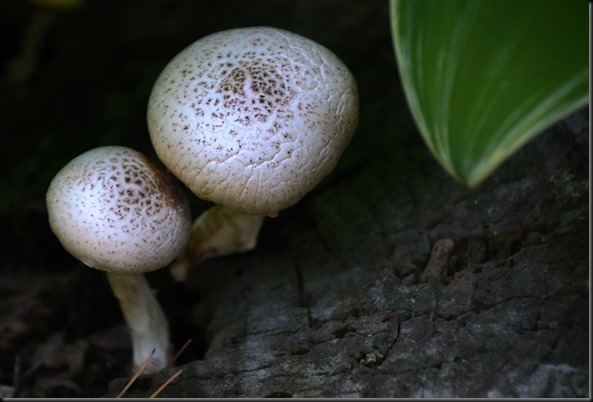 Another hot day coming up Monday so Pheebs and I will have to get out early if we’re going to get a walk in.  She doesn’t like this kind of hot weather any better than I do.  I think it’s supposed to cool off a bit Tuesday.  If I was an American citizen I probably would have pulled up stakes a long time ago and maybe moved to northern New Mexico somewhere for the summers and spent the winters RVing in Arizona and California. ONE OF OUR FRONT YARD’S NEON FROG MONSTERS

GROANER’S CORNER:(( If you are from the northern states and planning on visiting or moving to the south, there are a few things you should know that will help you adapt to the difference in life styles:
1. If you run your car into a ditch, don't panic. Four men in a four-wheel-drive pickup truck with a 12-pack of beer and a tow chain will be along shortly. Don't try to help them, just stay out of their way. This is what they live for.
2. Don't be surprised to find movie rentals and bait in the same store. Do not buy food at this store.
3. Remember: "Y'all" is singular, "All y'all" is plural, and "All y'alls'" is plural possessive.
4. Get used to hearing "You ain't from around here, are ya?"
5. You may hear a Southerner say "Oughta!" to a dog or child. This is short for "Y'all oughta not do that!" and is the equivalent of saying "No!"
6. Don't be worried about not understanding what people are saying; they can't understand you, either.
7. The first Southern expression to creep into a transplanted Northerner's vocabulary is the adjective "big ol'," as in "big ol' truck " or "big ol' boy." Most Northerners begin their new Southern-influenced dialect this way. All of them are in denial about it.
8. The proper pronunciation you learned in school is no longer proper.
9. Be advised that "He needed killin'" is a valid defense here.
10. If you hear a Southerner exclaim "Hey, y'all, watch this," stay out of the way. These are likely to be the last words he'll ever say.
11. If there is the prediction of the slightest chance of even the smallest accumulation of snow, your presence is required at the local grocery store. It doesn't matter whether you need anything or not. You just have to go there.
12. When you come upon a person driving 15 mph down the middle of the road, remember that most folks here learn to drive on a John Deere, and that this is the proper speed and position for that vehicle.

Little Johnny's new baby brother was screaming up a storm.Johnny asked his mom, “Where’d he come from?”“He came from heaven, Johnny.”“Wow! I can see why they threw him out!”