MOTORHOME WAX JOB IS FINALLY DONE AND BY GOLLY THAT’S GOTTA BE A BIG ‘YAHOUIE LOUIE’:)) 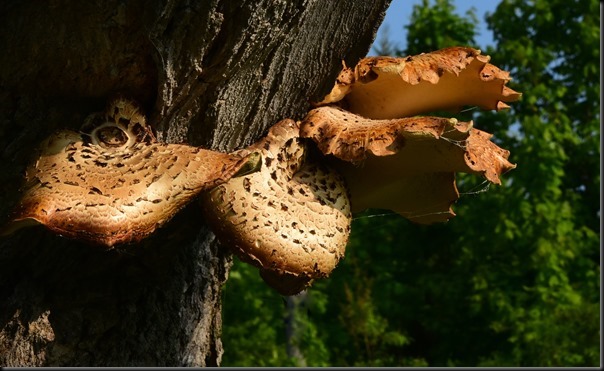 Knew right away soon as I stepped out the door this morning about 8:30 that it was going to be a hot one.  Heat and humidity were already in the air so our Jeep ride this morning was not a long one.  Had my mind set on finishing that Motorhome wax job today and earlier rather than later was the better option because of the heat.  Pheebs and I did manage maybe a dozen miles south of Bayfield with a couple roadside stops along the way.  With hotter weather like today forest walks are out.  Mosquitos and other biting bugs are now bad and that makes for an uncomfortable walk.  We were back home within the hour. 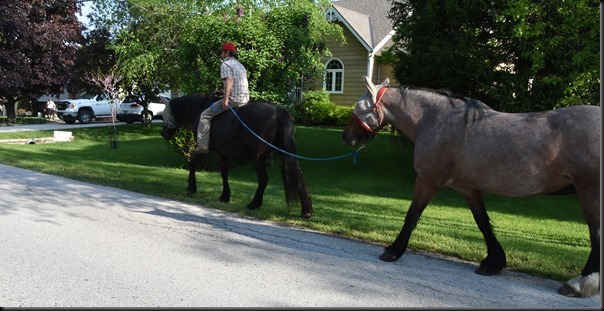 A COWBOY AND HIS HORSES….BAYFIELD STYLE 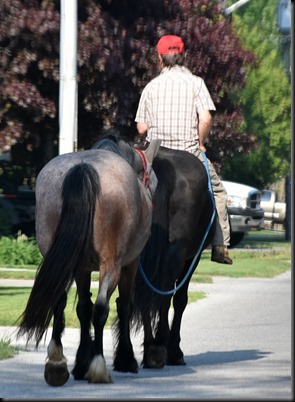 I didn't waste any time lining up a couple ladders and getting at the waxing job again.  The finish line was in sight and an hour or so later I was finally done except for some small re-do areas here and there.  From what I could see in the shade of the pine trees the Motorhome looked pretty good and although I was glad the job was finished I knew I would never do that again.  Touch ups here and there Okay but not the whole thing.  The Meguires Marine Wax I used seemed to do a good job and I was sure glad I had bought a Simoniz 10 inch Polisher.  For anyone considering doing their own rig I would recommend that 10 inch machine.  It's not heavy and can easily be used with one hand or two.  It's designed for two.  In a comment a couple blogs ago Joe C. in part asked, 'Have you ever tried a dry wash? We have tried a couple , and the best is called "The Solution"……  Well coincidentally that is exactly what I used to clean the coach's finish before applying the wax.  I remember about 6 or 7 years ago at the big RV January bash in Quartzsite Arizona when 'The Solution' was all the rage.  Everybody was buying up gallons of it including us.  I have a photo of me somewhere just outside the 'The Big Tent' walking along with a heavy gallon jug of 'The Solution' in my hand.  People were just going bonkers over this stuff.  Some put it on their cereal in the morning, others used it to grow hair, some added it to their gas tanks and got an extra 50 miles to the gallon while still others put it in their pipes and smoked it.  One blind man said after adding a teaspoon of the stuff to his tea every afternoon for a month he could see again.  Well of course none of that is true but it was a big hit that year in Quartzsite and it does do what it says it will do.  Of the gallon we bought years ago I have about one quart left. 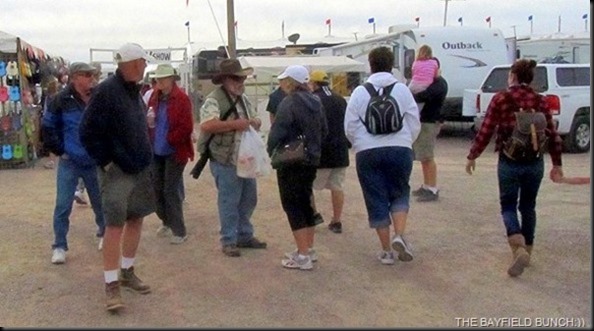 BY GOLLY IF I DIDN’T FIND THAT QUARTZSITE PHOTO FROM JANUARY 27TH 2012….JUST OUTSIDE THE BIG TENT A COUPLE BLOG READERS  (ANGELA & DON FROM NANIMO B.C.) RECOGNIZED KELLY AND STOPPED TO SAY ‘HELLO’ 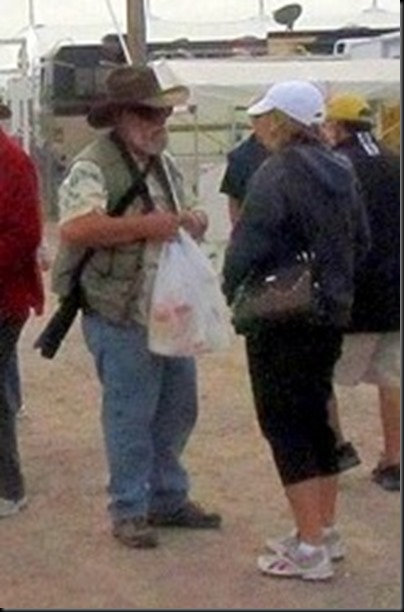 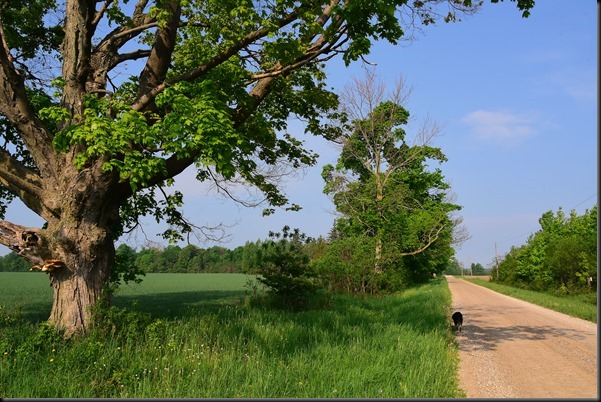 DRIVING ALONG SOMETHING CAUGHT MY EYE ON THAT MAPLE TREE TO THE LEFT…..AND THAT BLACK OBJECT ON THE ROAD??  OH IT’S JUST THE PHEEBS:)) 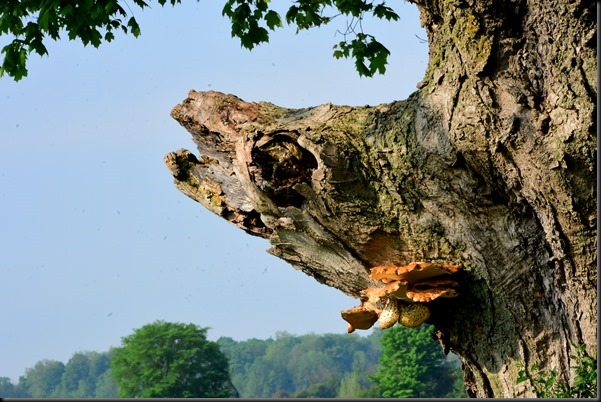 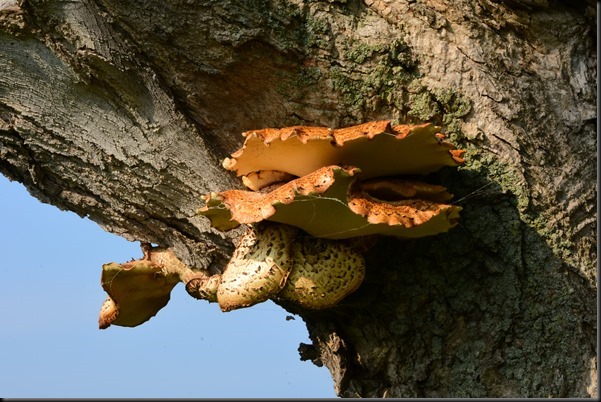 ON CLOSER IMSPECTION I SEE THOSE ‘GILLS’ ARE ACTUALLY NOT GILLS AT ALL BUT A TREE FUNGUS…..NOW YOU REALLY DIDN’T THINK I THOUGHT….. OR DID YOU:)) 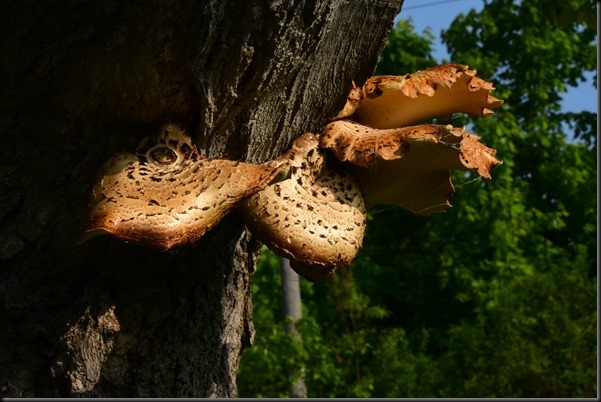 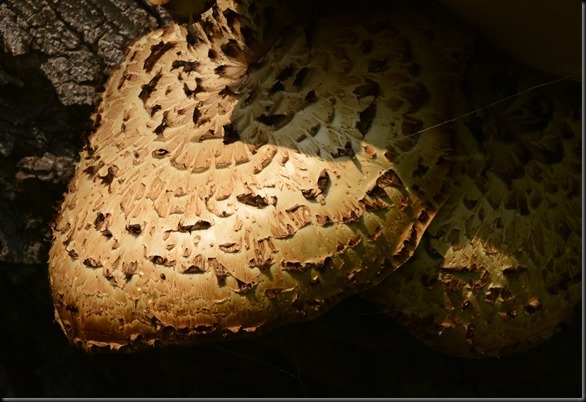 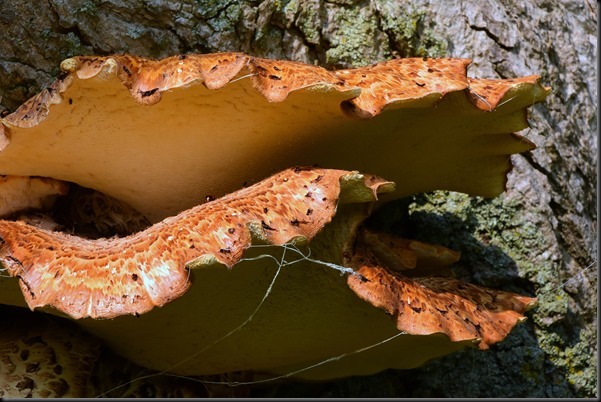 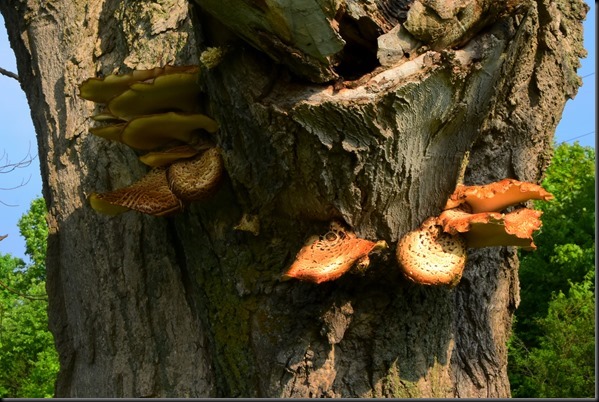 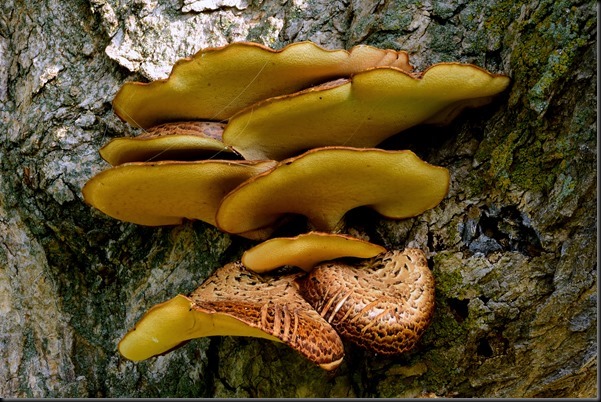 Just after I finished the Motorhome earlier today I didn't miss a beat and rolled Kelly's Pontiac Sunfire out of the carport, washed it, cleaned all the glass, and shined up the dash using some ArmorAll.  I also took the Motorhome for a quick spin around a couple paved country blocks in order to get it turned around and nosed back into it's spot when I returned.  It was about 1:30 and with the day's heat building I didn't waste any time in getting back into the air conditioned house.  Minutes after that with my face mask, snorkel, and flippers on I tossed my sweaty and sticky old self into the shower for a couple hours.  Well Okay not quite that long but you get the idea.  I came out of that shower feeling like a totally new person.  I like when that happens:)) 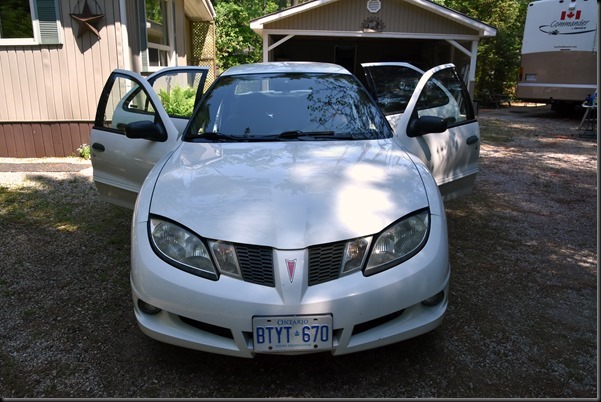 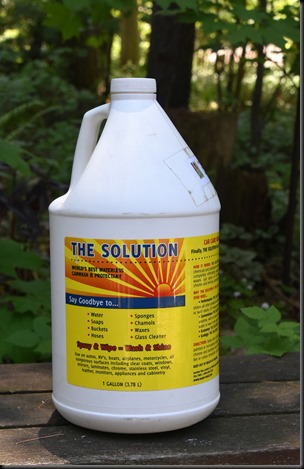 <<< AHHHH YES, MEMORIES OF QUARTZSITE ARIZONA AND THAT’S THE VERY JUG I HAD IN THE PLASTIC BAG IN QUARTZSITE

With just about every muscle in my body hollering at me I flopped myself into my recliner and with the nearby fan going full tilt about 3 feet away I let myself slide away to another land so very very far away in a Galaxy of unmanageable wonderments.  There were acres and acres of peanut butter and honey sandwiches everywhere. 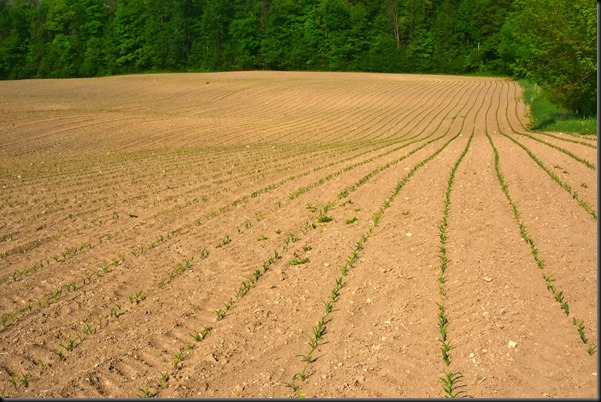 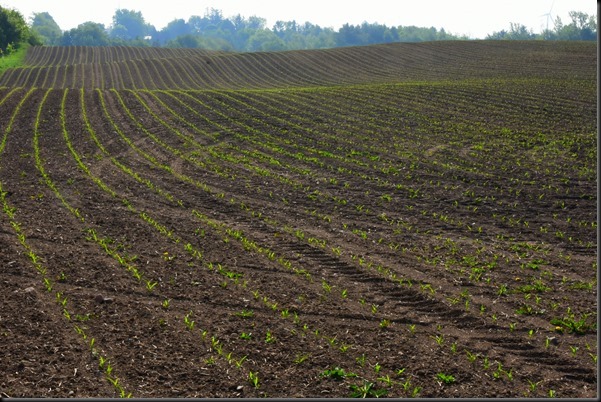 GROANER'S CORNER:((  Here’s A Great Fruit Cake Recipe…….  You'll need the following: a cup of water, a cup of sugar, four large eggs, two cups of dried fruit, a teaspoon of baking soda, a teaspoon of salt, a cup of brown sugar, lemon juice, nuts, and a bottle of whisky.  Sample the whisky to check for quality.  Take a large bowl. Check the whisky again. To be sure it is the highest quality, pour one level cup and drink. Repeat. Turn on the electric mixer, beat one cup of butter in a large fluffy bowl. Add one teaspoon of sugar and beat again.  Make sure the whisky is still okay. Cry another tup. Turn off the mixer. Break two leggs and add to the bowl and chuck in the cup of dried fruit. Mix on the turner. If the fried druit gets stuck in the beaterers pry it loose with a drewscriver.  Sample the whisky to check for tonsisticity. Next, sift two cups of salt. Or something. Who cares? Check the whisky. Now sift the lemon juice and strain your nuts. Add one table. Spoon. Of sugar or something. Whatever you can find.  Grease the oven. Turn the cake tin to 350 degrees. Don't forget to beat off the turner. Throw the bowl out of the window, check the whisky again, go to bed and hang onto your head.

- "Thousands of years ago, cats were worshipped as Gods and cats have never forgotten this."

- "Some people say that cats are sneaky, evil, and cruel. True, and they have many other fine qualities as well."

- "My husband said it was either him or the cat ... I miss him sometimes."

A priest decides one day to visit one of his elderly parishioners, Mrs. Smith. He rings the door bell and Mrs. Smith appears. "Good day, Mrs. Smith. I just thought I would drop by and see how you are doing."   "Oh just fine Father, come on in, and we'll have some tea."  While sitting a the coffee table, the priest notices a bowl of almonds on the table. "Mind if I have one?" the priest says.  "Not at all, have as many as you like."  After a few hours, the priest looks at his watch and alarmed at how long he has been visiting, says to Mrs. Smith, "Oh my goodness, look at the time. I must be going. Oh, but dear me, I have eaten all your almonds. I'll have to replace them the next time I visit."  Mrs. Smith replied, "Oh don't bother Father. Ever since I lost all my teeth, it's all I can do just to lick the chocolate off them."