Decided Thursday to head out Friday morning in search of a small ghost town near us called Swansea.  Well, that was the plan until the weatherman turned things around & surprised us with a cooler overcast day.  And, that changed things!! 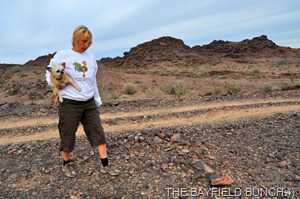 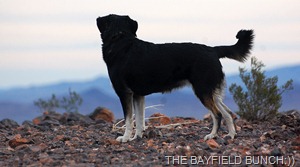 We made a last minute snap decision & decided to go to Quartzsite instead.  Figured we would rather kick some dust around in Swansea on a warmer sunny day.  Our logic figured it would be better to do the Q on a cloudy day.  I think everybody else thought that too.

WEST END OF PLOMOSA ROAD…..GLAD WE ARE AT THE EAST END 12 MILES AWAY…..CAN’T IMAGINE BEING JAMMED TOGETHER LIKE THIS

I had absolutely no interest or intentions of going to Quartzsite again this year but I downed a second glass of milk for fortification & steeled myself against the inevitable!!  The writing was on the wall.  Either go to Quartzsite shopping, or else!!!!!!

LOTS TO SEE AROUND QUARTZSITE 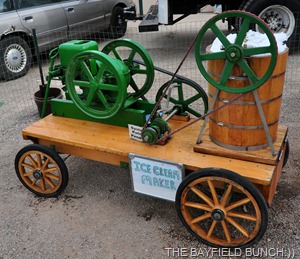 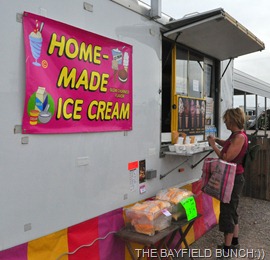 AND, LOTS OF YUMMY TREATS AROUND QUARTZSITE

Not wanting to suffer the ‘or else’ I loaded myself into the Jeep & off we went, 17 miles to the Q.  As expected, nothing had changed since the other 4 times I have been there.  Bumper to bumper cars, trucks & RV’s along with crowds of shuffling shoppers.  Row after row of vendors hawking their wares.  A Carnival atmosphere with the delightful smells of fried onions, popcorn, fry cakes, hotdogs and hamburgers.  Now, how’s that for a positive afterthought. 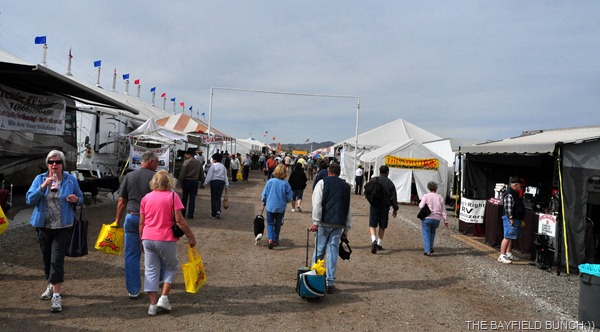 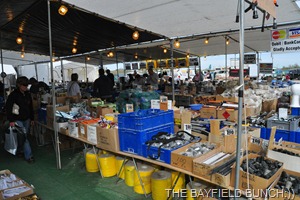 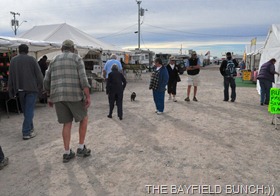 It was when I had to use one of those ‘Johnny on the Spot’ toilets that I was really regretting my circumstances.  Oh what had happened to my wide open desert spaces with refreshing wisps of sweet smelling breezes wafting up my nose.  Oh dear!! 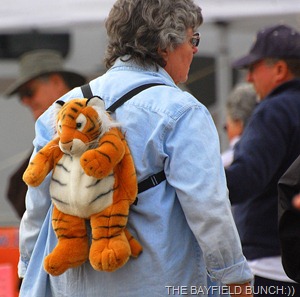 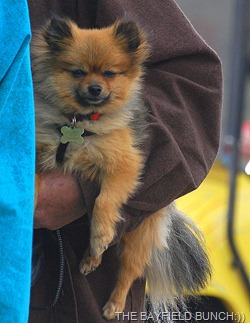 Kelly did have a list of things she was looking for & I was pleased to have my name on a few of them.  A couple new ‘no hole’ belts, whip aerial flag for the Jeep, a ratchet strap for our satellite dish, a jug of ‘Solution’ for magically cleaning stuff, a toggle switch for our satellite or antennae TV & probably half a dozen other things I haven’t been told about yet. 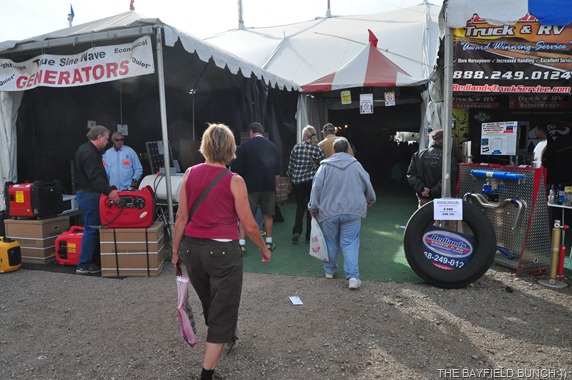 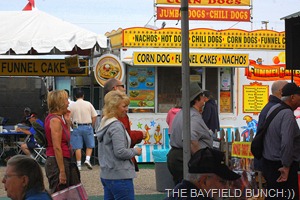 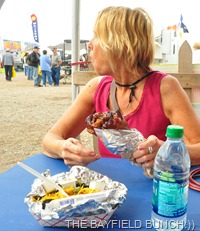 We dragged up & down the rows in Tyson Wells for nearly an hour before heading over to do battle with the heavier crowds in and around the big tent.  It was in the big tent that we got the long Jeep antennae & Kelly made me carry that so she could keep track of me rushing ahead of her in a vain attempt to escape the tent mayhem.  The antennae’s are affixed to ATV’s or rear bumpers of vehicles & are a safety feature when off roading through hills & steep gullies.  The small flags atop the aerials are often seen before the vehicle below them is. 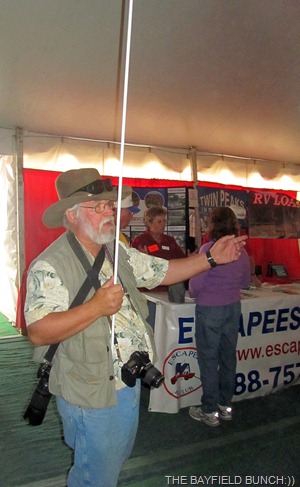 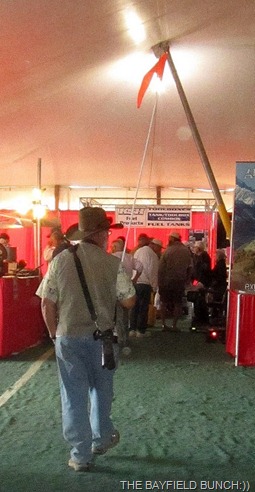 KELLY MADE ME CARRY THIS FLAG POLE:))

I actually didn’t do too badly in the big tent & managed to keep a lid on myself for nearly half an hour before starting to feel the stirrings of…….snarly!!  Finally, enough was enough & I had to get myself away from all the Carnival Barkers, noise & jostling crowds.  At least outside of the ‘in tent circus’' I had the advantage of fresh air & open skies.  Like a caged animal I finally began to sense my freedom at the 4 hour mark.  We were soon heading in the direction & sanity of the Jeep, loaded down with all our ‘stuff’.  Didn’t pick up the LED lights we were looking for today but might stop at the RV Sales & Service store on the way out of Quartzite whenever it is we leave here. Heard they have better prices there. 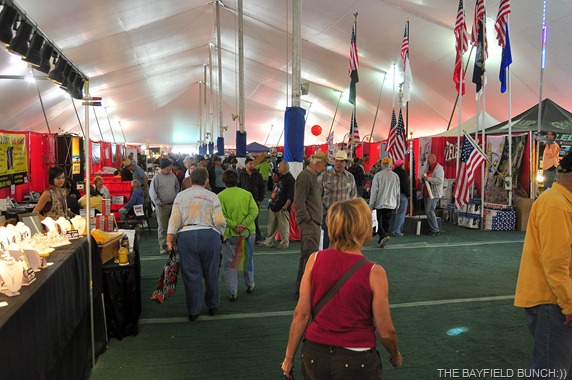 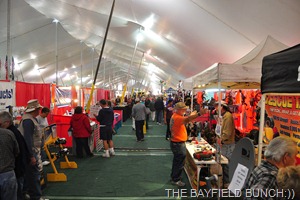 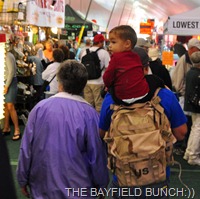 IN THE ‘BIG TENT’

And then something nice happened.  Kelly was spotted and recognized by a couple of our Blog readers.   Angela & Don from Nanimo BC said they knew it was Kelly right away when they saw her.  Pretty blondes are always easily recognizable you know.  Had ourselves a nice chat for a few minutes.  They had been out to the Bouse area last year looking for JANNA & MIKE along with furry little Emmi.  They did manage to meet Emmi that day who happened to be in the good care of Jim & Ellie Meachum while Mike & Janna were away.  Small kinda world because it was just two years ago Kelly & I had done the same thing in the same area looking for the same people. 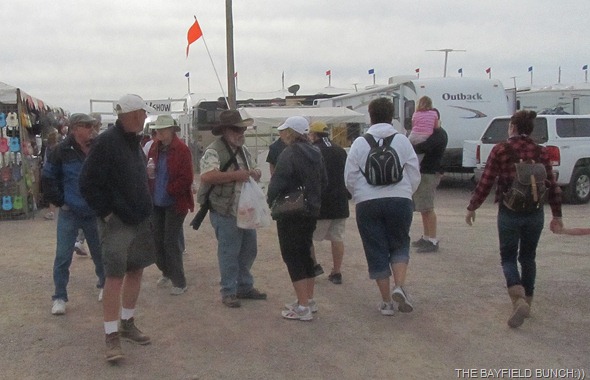 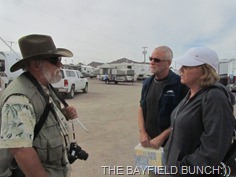 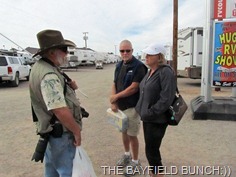 Finally made it back to the Jeep wherever it was we had left it & I wasn’t long in cranking that little giggle box into gear & putting some mighty fast miles between us & Quartzsite.

Spent the rest of the day inside.  Overcast windy cooler days don’t work for me.  Didn’t appear to be working for Ivan & Wandering Willy either because we didn’t see them although I’m pretty sure I saw that long pole with the mirror on the end of it peeking around a corner of WW’s rig again:)) 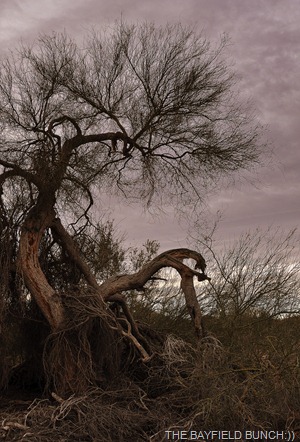 GROANER’S CORNER:((  And remember folks, if the music’s too loud….. you’re too old!!

If one's thoughts are positive about the landscape, one's eyes will appreciate what they see......AL.