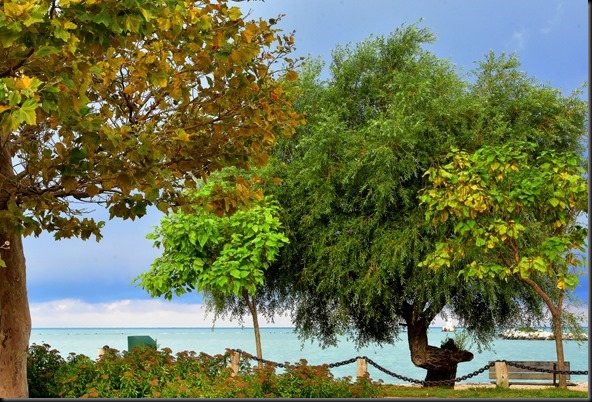 Had us quite a deluge of rain this morning as a fast moving narrow band of accumulated storm cells came ashore and probably caught a lot of people unawares.  Walking out of Goderich’s Canadian Tire Store with my head down and eyes concentrated on my feet to make sure they were both headed in the same forward direction I had wanted them to go I motored right out the door and nearly drowned.  Made a mad splish-splash dash across the parking lot for the Jeep where I knew I had left the two front windows a third of the way down.  Pheebs was hiding out in the back staying dry while I hauled my soggy self inside.  Things were fairly wet and the windshield fogged so I busied myself taking advantage of the available rain water to use a couple McDonalds serviettes and proceeded to wipe down the dash and steering wheel, etc.  Rained all the way back to Bayfield and then some.  Power blinked out just long enough for me to later have to re-set all the clocks and outside light timers. 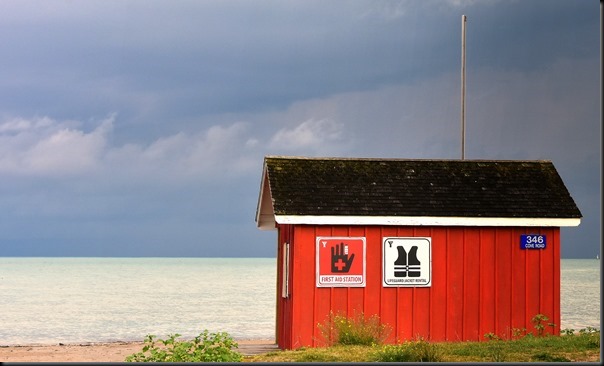 A STORM FRONT COMING ACROSS LAKE HURON FROM MICHIGAN 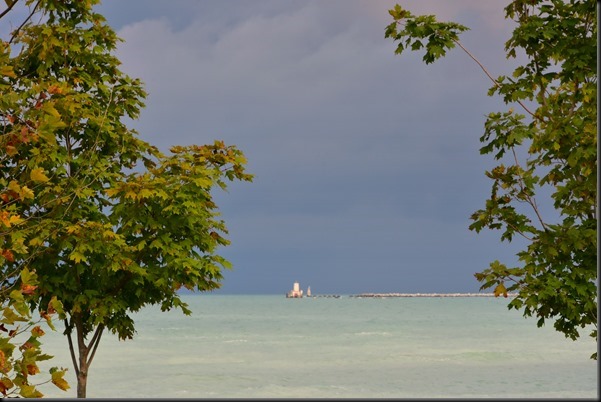 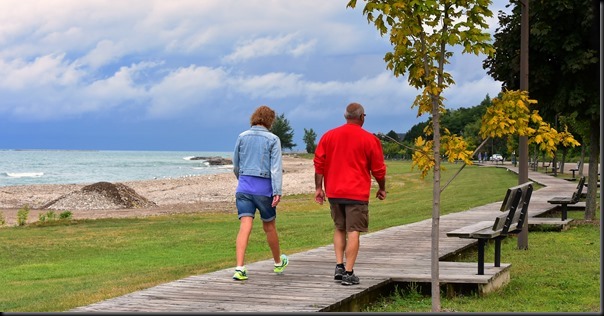 MORNING WALKERS ON THE BOARD WALK WERE PICKING UP THEIR PACE 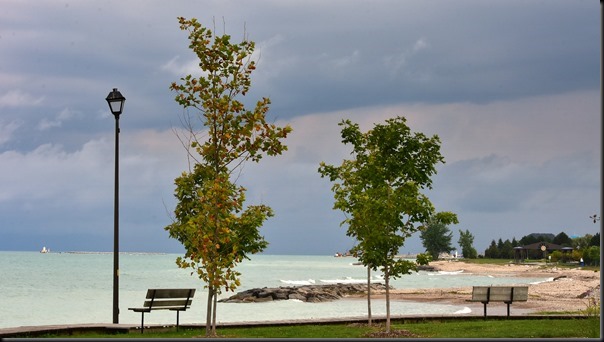 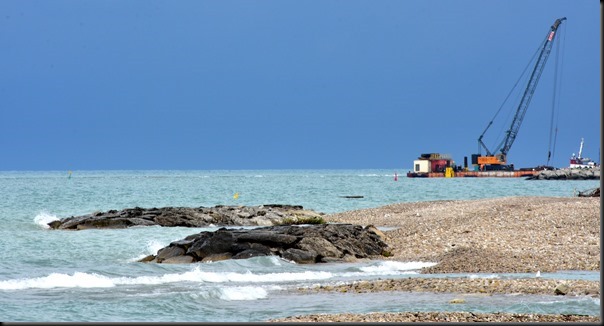 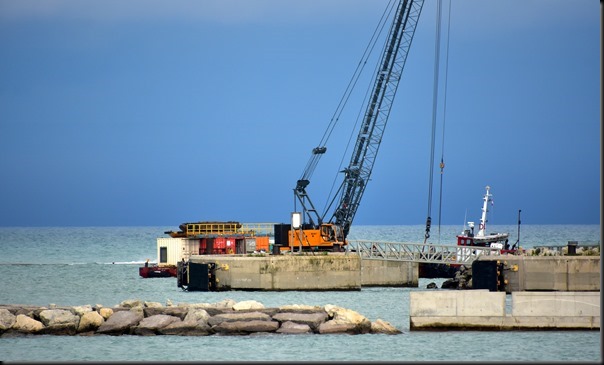 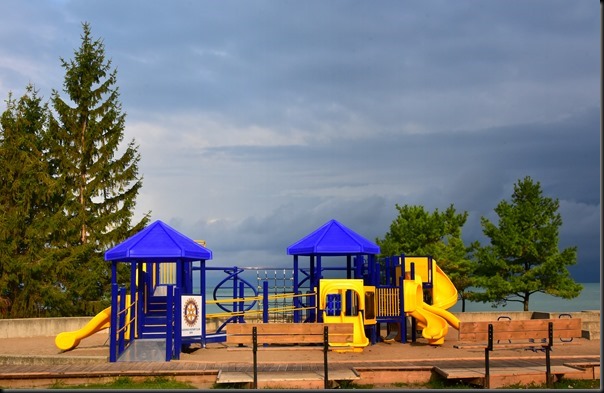 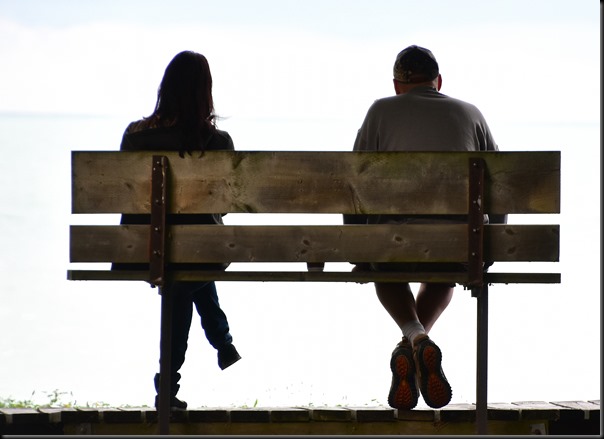 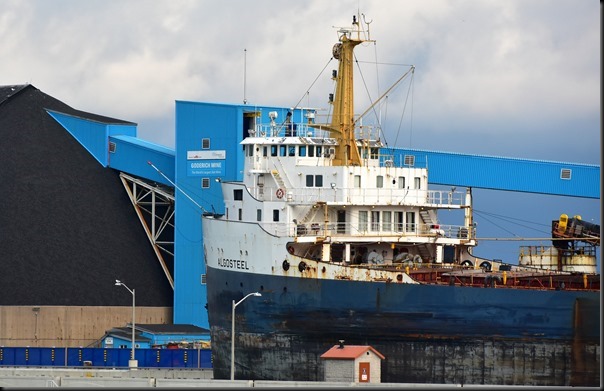 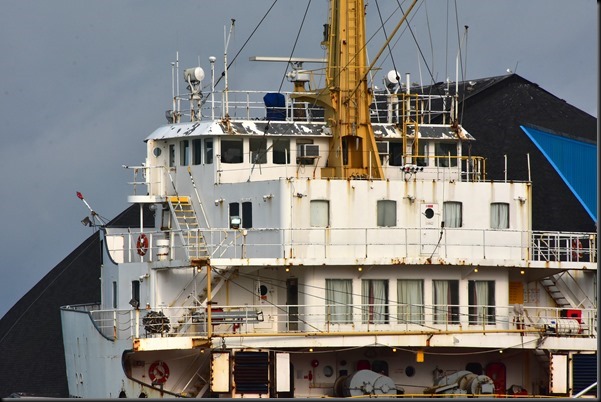 Our skies began clearing shortly after noon and we ended up with sunny sky blue afternoon.  However, by 7 o’clock tonight we were again being pummeled by another rain storm. 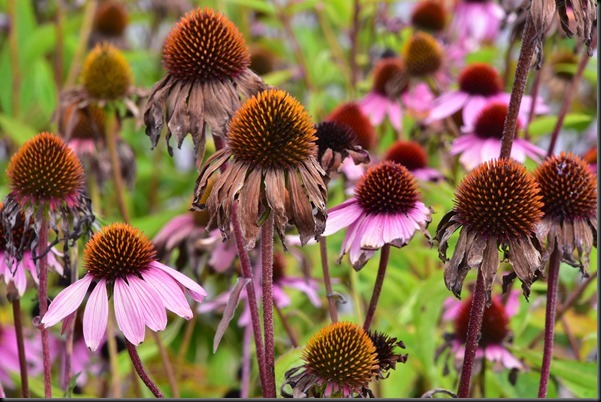 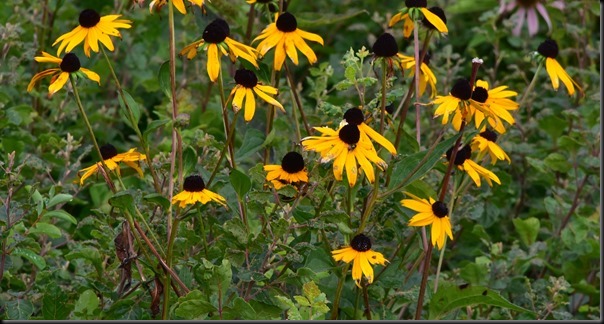 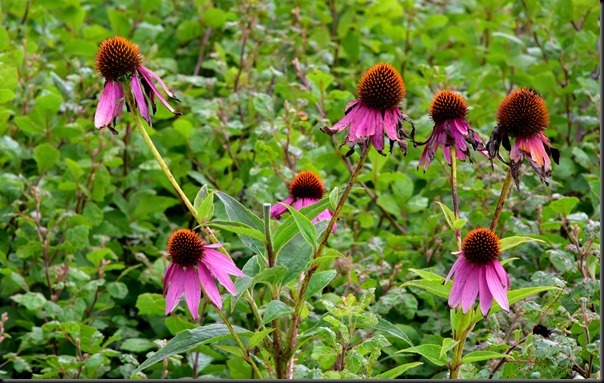 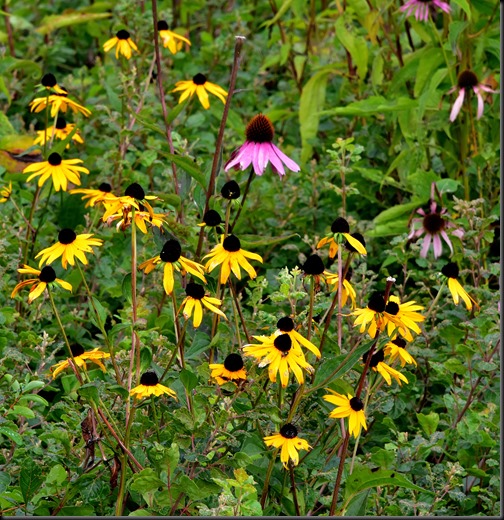 Speedy Glass is coming in the morning to fix two stone chips in our Motorhome’s driver side windshield.  Can’t remember where we got the one closest to the center windshield bar but the other one on the other side was caused by a border patrol vehicle speeding north between Why and Ajo Arizona last February 24th.   We were in transit from Ajo through Tucson to the Las Cienegas National Conservation Area northwest of Sierra Vista at the time.  That border patrol vehicle must have been chasing Speedy Gonzales himself when it kicked up a stone that hit our windshield.

STOPPING TO TALK TO A DOGGY ALONG THE WAY 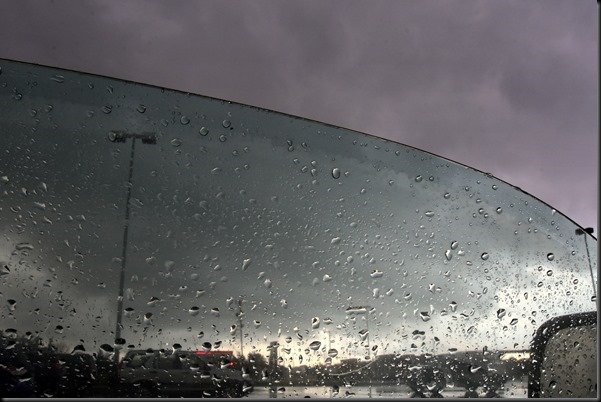 I PRACTICALLY HAD TO SWIM BACK TO THE JEEP 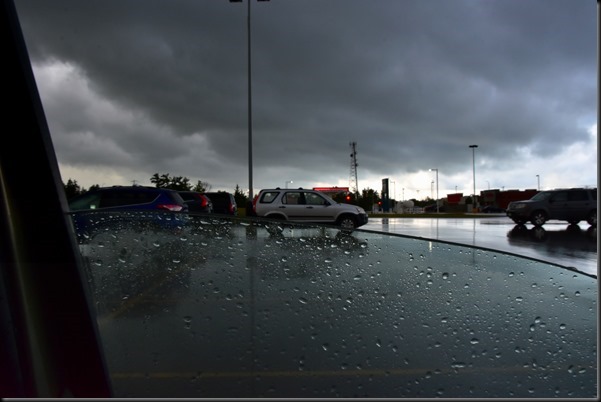 Facebook in it’s daily reminder of where we have been and what we have been doing for much of these past 10 years referenced another one of my 2012 posts when I looked back to an event near Tombstone Arizona in February 2008.  The post is entitled How Our Blog Happened To Lead A California Couple To California.  We visited and stayed at this very same couple’s property this past January from the 11th to the 18th.  You can find my posts for those days in our Archives on the side bar.  Hey Pat and Nancy hope you folks are well way out there somewhere east of Sierra Vista Arizona:))))) 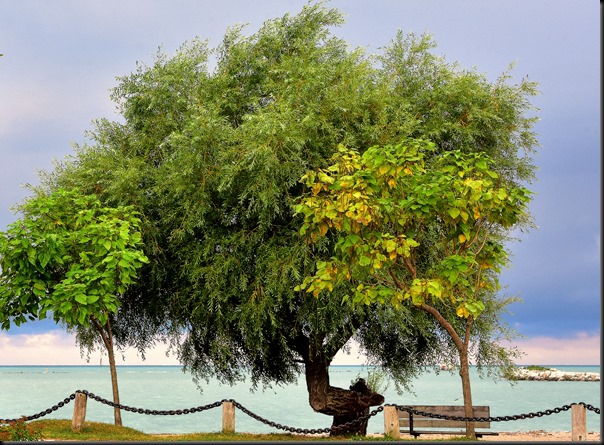 GROANER’S CORNER:(( A man was just coming out of anesthesia after a series of \ests in the hospital, and his wife was sitting at his bedside. His eyes fluttered open, and he murmured, "You're beautiful." Flattered, the wife continued her vigil while he drifted back to sleep. Later, her husband woke up and said, "You're cute." "What happened to 'beautiful?'" she asked him. "The drugs are wearing off," he replied.

Wife: Whatcha doing?
Me: Nothing.
Wife: You did that yesterday.
Me: I wasn't finished.

A vacationer called a seaside hotel to ask its location. "It's only a stone's throw from the beach where the kids hang out," he was told.  "But how will I recognize it?" asked the man.  Came the reply: "It's the one with all the broken windows."

Knock Knock
Who's there?
Panther
Panther who?
Panther no panths, I'm goin' swimmin' 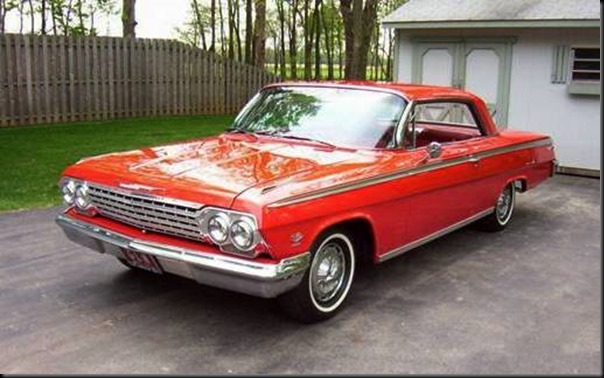 Q: What's the only car to appear simultaneously on the covers of Time and Newsweek? 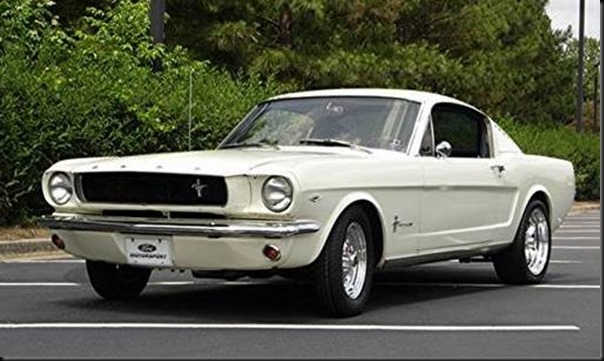 Q: What was the lowest priced mass produced American car? 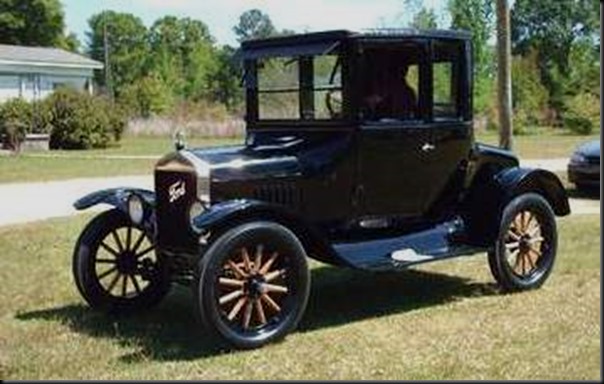