BIG ARIZONA SKIES BROUGHT US SOME THUNDER AND RAIN THIS AFTERNOON 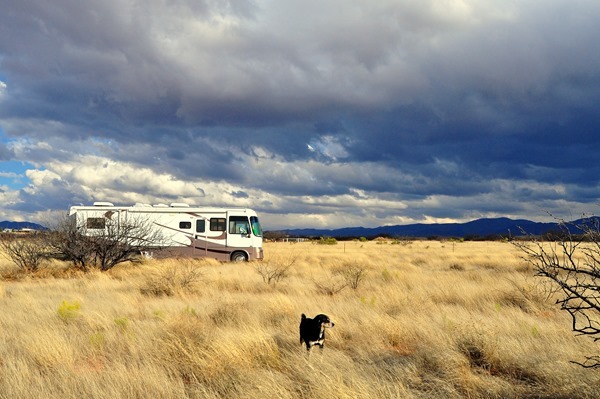 Looking out our rig’s side window first thing this morning I was happy to see a few sun splashes traveling across the Huachuca Mountains meaning we were not under solid cloud with a threat of rain yet. 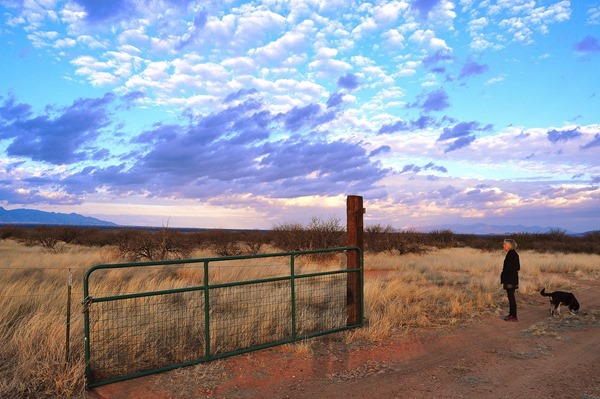 MORNING WALK IN THE GRASSLANDS 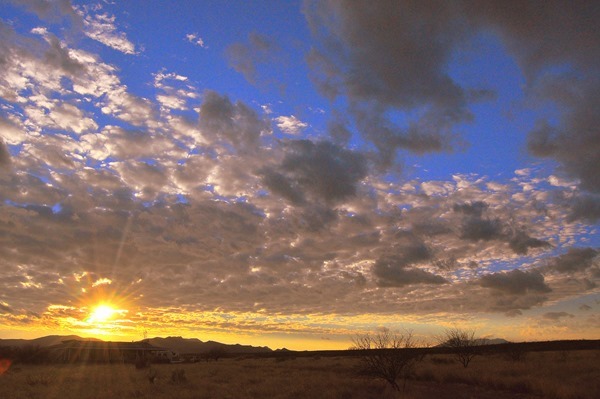 SUNRISE OVER THE MULE MOUNTAINS

CLOUDS SITTING ATOP THE HUACHUCA MOUNTIANS 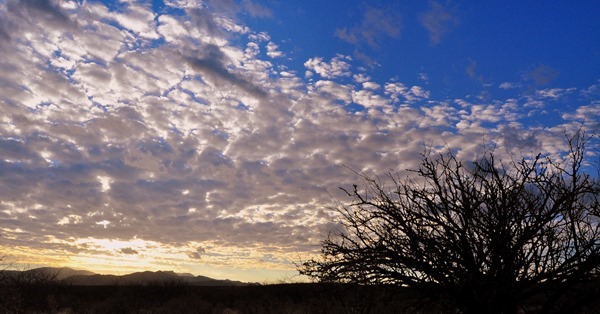 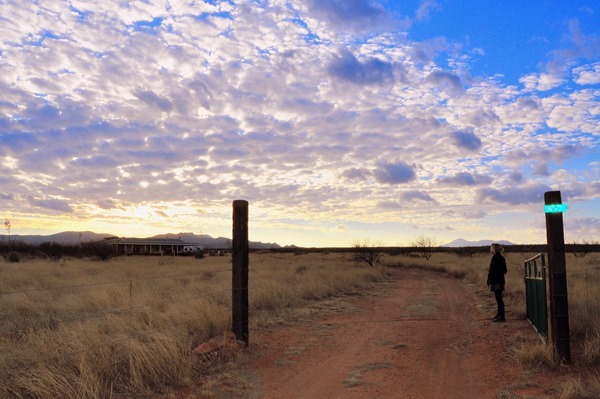 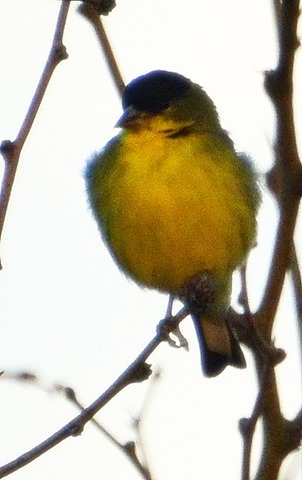 Nancy had told us of a place in Sierra Vista where we could dump our tanks, take on fresh water for free and top up our propane tank.  It was located behind the Valero gas station at the intersection of Sierra Vistas busiest intersection.   Knew there would be heavy traffic at that crossroads so we first drove into town with the Jeep to see just exactly how to get into the dump facility.  I wasn’t about to take our 37’ Motorhome through Saturday’s ‘shopping’ traffic not knowing exactly where my 90* right hand turn would be.  Valero is on the northwest corner of that intersection with the RV facilities like water propane, air, and dump station on the north side of the building.  With that all figured out we hustled back out to our rig, parked the Jeep and brought the Motorhome back into Sierra Vista and took care of business.  From there it was back out to our friend’s Nancy and Pat’s place to re-park the Motorhome in a different location on firmer ground……and wait for the rain. 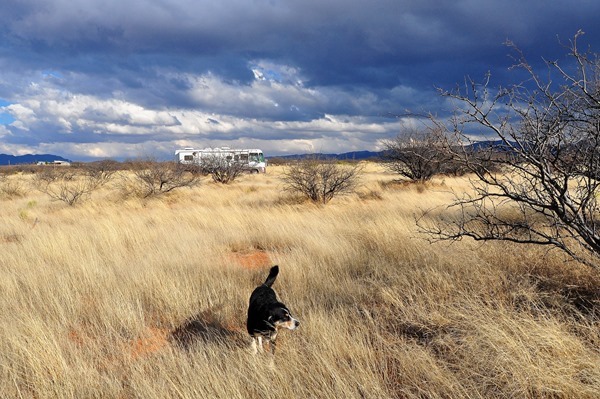 PHEEBS AND I HEADED OUT FOR AN AFTERNOON WALK 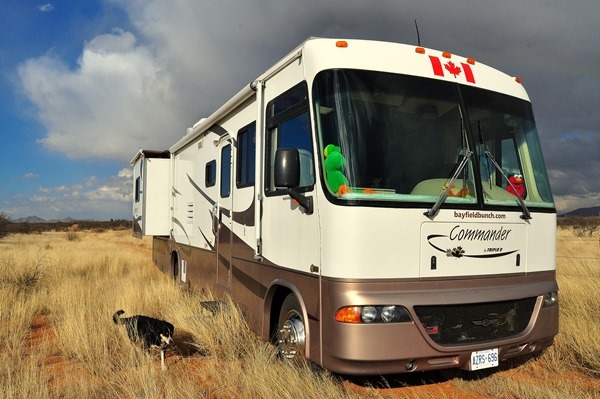 OUR NEW LOCATION A SHORT DISTANCE WEST OF OUR PREVIOUS LOCATION

Warm gusty winds picked up coming right at us head on from the south bringing big beautiful cloud formations with them from Mexico.  I could sit in my recliner inside out of the wind and watch them through our Motorhome’s huge windshield. 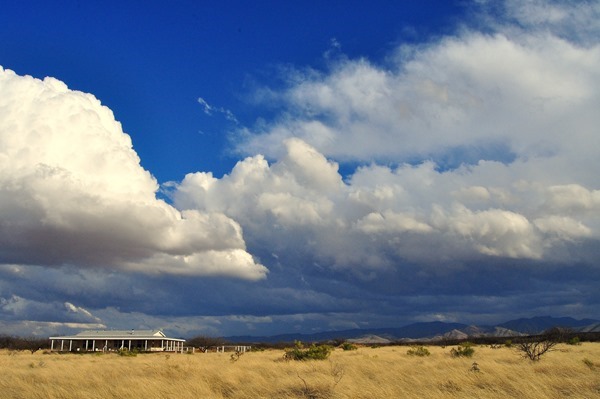 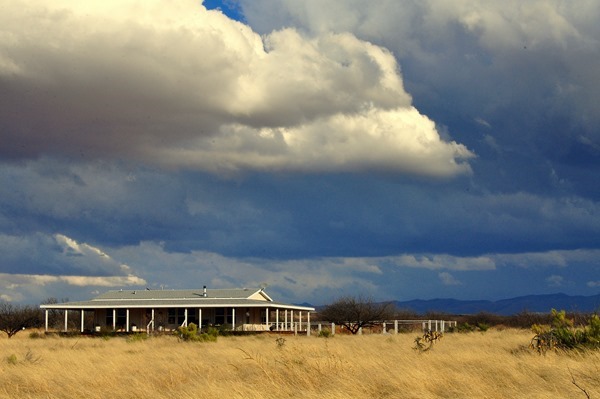 Kelly headed off into Sierra Vista to do a bit of browsing around 2 so Pheebs and I vegged out for the remainder of the afternoon.  Noticed a few rain drops on the windshield shortly before 3.  But only a few. 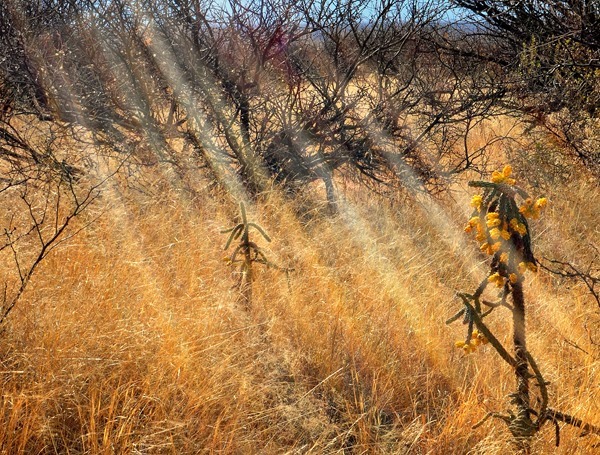 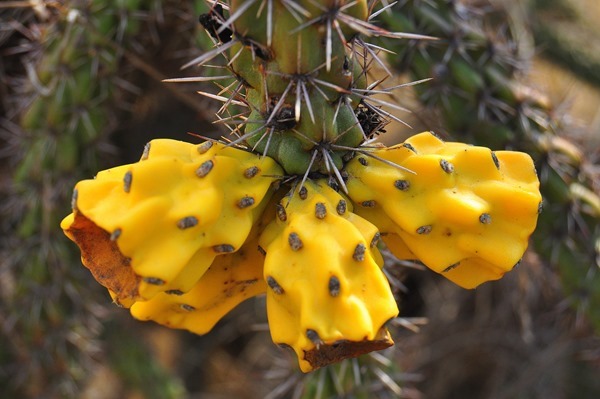 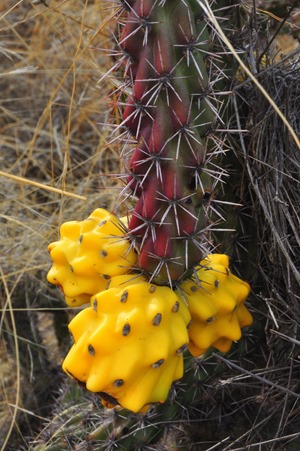 It took a bit of digging to find the post I had written on September 5th 2012 about How Our Blog Helped Lead A California Couple To Arizona but I did finally manage to find it.  The story begins in February of 2008. 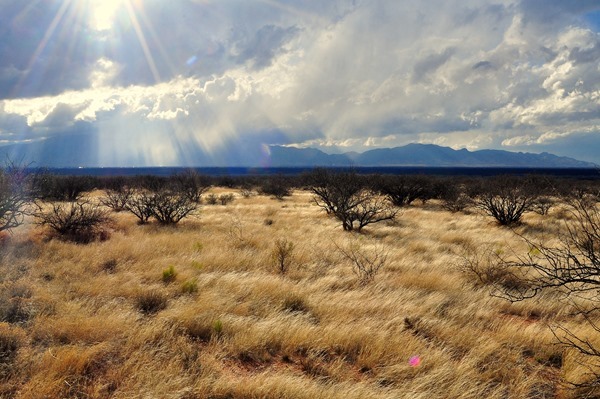 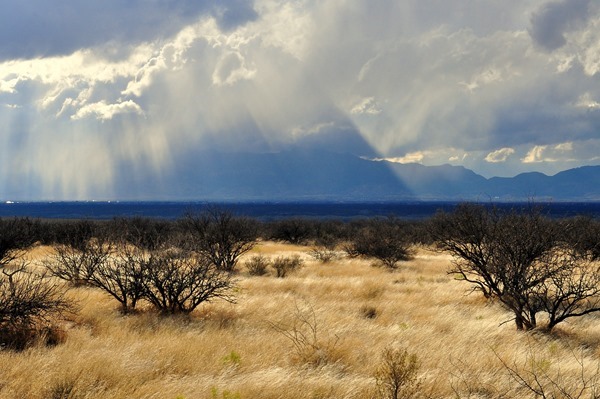 LOOKING OUT OUR SIDE DOOR 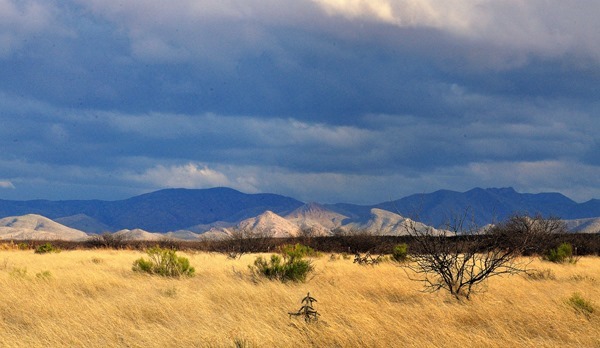 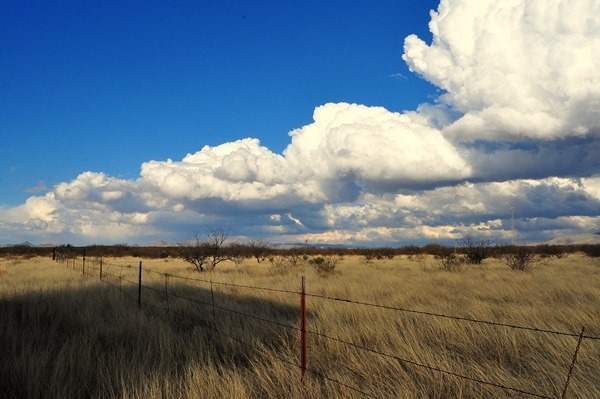 It was 4:40 when I heard the first rumble of thunder as a huge passing rain cloud dumped it’s whole load of water on us.  Standing in the rig’s open door I at the same time watched dapples of sunlight dragging themselves up the San Pedro Valley.  So beautiful to watch Nature putting on such a grand show today.  Could feel the temperature dropping so there may be snow on the mountain peaks by morning.  The winds finally abated by late afternoon. 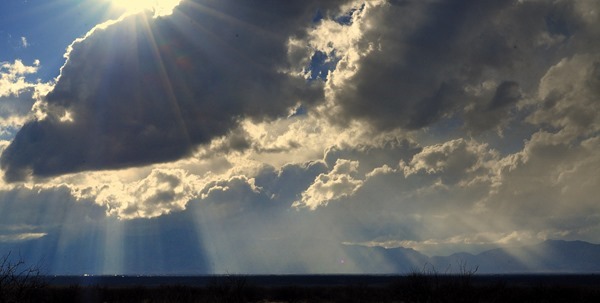 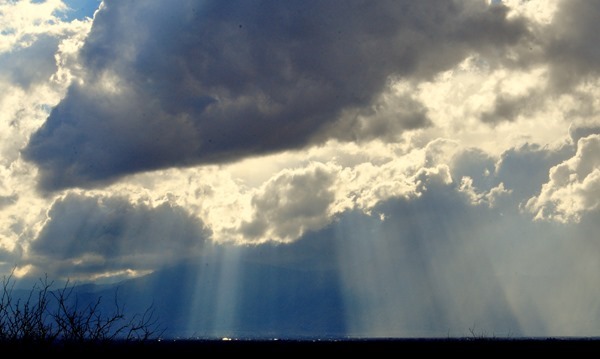 CAN YOU SEE THE BIG DARK CLOUD FISH??

And here ‘s something from my good friend Jim back up there in the frozen north.  For anyone who has at some point in their life found themselves under a heavy debt load you might want to read this humorous take on how you may very well have gotten yourself there……..My Crushing Debt. 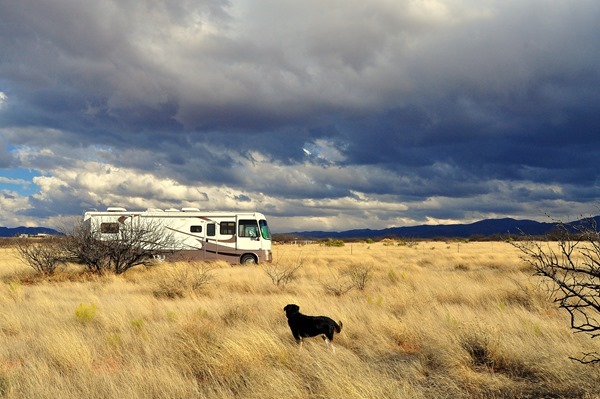 Kelly finally made it back to the rig about 5:30 with a few things from the Thrift store despite cruising through Dillard's, Ross’s and Marshalls.  She said there was no rain in Sierra Vista and she never heard any thunder.  So there ya go……….. 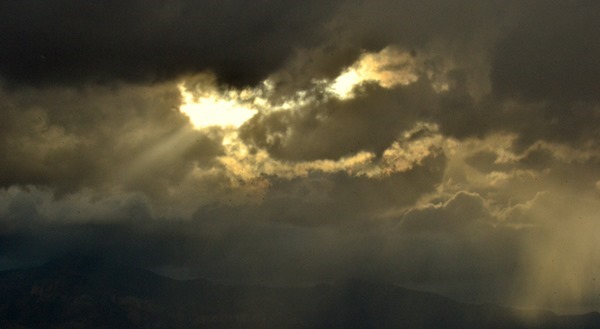 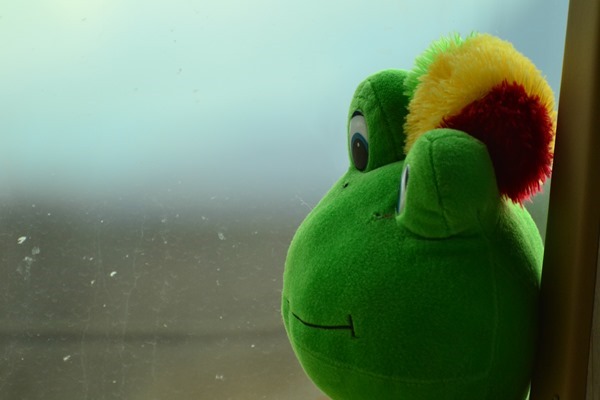 Two cannibals are eating a clown. One says to the other, 'Does this taste funny to you?'

That reminds me of the cannibal that passed his friend in the woods.....

When do cannibals leave the table? When everyone's eaten.......

What is a cannibal's favorite type of TV show? A celebrity roast.....

Where do cannibals shop for fine furniture? Eatin' Allen's......

What do cannibals eat for dessert? Chocolate covered aunts......

What do cannibals make out of politicians? Baloney sandwiches......

Have you heard about the cannibal restaurant? Dinner costs an arm and a leg......

Did you hear about the cannibal who loved fast food? He ordered a pizza with everybody on it.......

Cannibal's recipe book: How to Serve Your Fellow Man.......

Two cannibals were sitting by a fire. The first says, 'Gee, I hate my mother-in-law.' The 2nd replies, 'So, try the potatoes.'

A man had just bought a parrot at an auction after some very spirited bidding.  "I suppose that bird talks?" he said to the auctioneer. "Talks!" was the reply. "Who do you think was bidding against you?"