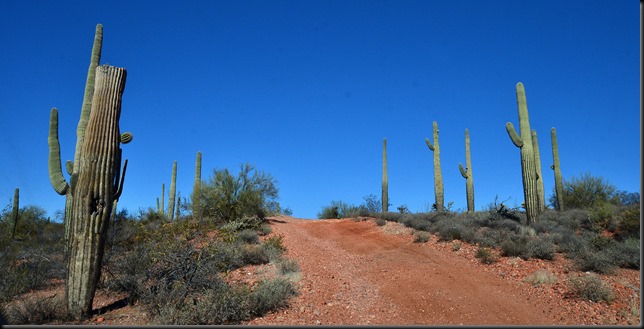 Well where do I begin?  At the beginning I guess.  It's been a real nerve wracking time with all this Live Writer, Open Live Writer, & Blogger stuff these last 24 hours.  Wednesday afternoon after spending another very frustrating period of time fighting to correctly install photos into Blogger I finally just gave up.  Putting my blog together each day has always been an enjoyable experience for me, that is until this past week when many of us lost our beloved Live Writer program.  I walked out into the kitchen Thursday afternoon & said to Kelly if I have to use that miserable Blogger program my blog is finished.  I had had enough & with the amount of hair I was tearing out I would soon be bald.  With that Kelly walked over to her computer & began to work her magic.  Here is a link for the new OPEN LIVE WRITER. 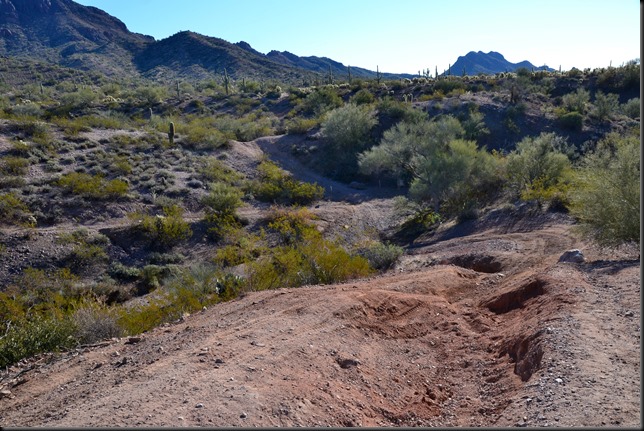 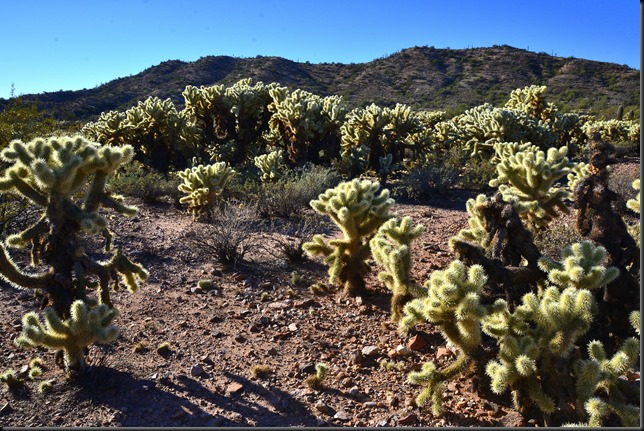 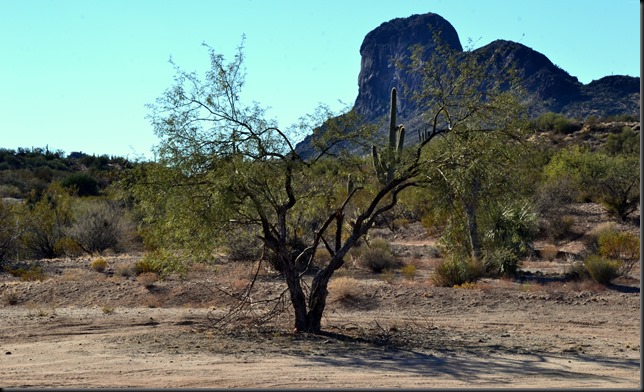 Using Google Search Kelly typed in 'Open Live Writer' to see if she could find out any progress info on how the new Open Live Writer was progressing, if it was progressing.  The third search item down she noticed the name of one of the fellas working on the new OLW program.  It was his website so Kelly clicked on it & began reading.  She noticed Scott Hanselman had a Twitter account so she promptly Tweeted him simply asking when the new OLW program would be up & running.  Wasn't long & Scott (he actually works for Microsoft) tweeted back saying they were hoping to have the program running that very night.  He sent us a link to try out which I did & that was initially my first short test post which published Thursday night.  I was sooooooooooooooooooo happy:))))))  But my happiness soon turned to frustration again:((

SOME GREAT BOON DOCKING SPOTS OUT HERE IN THE VULTURE MOUNTAINS 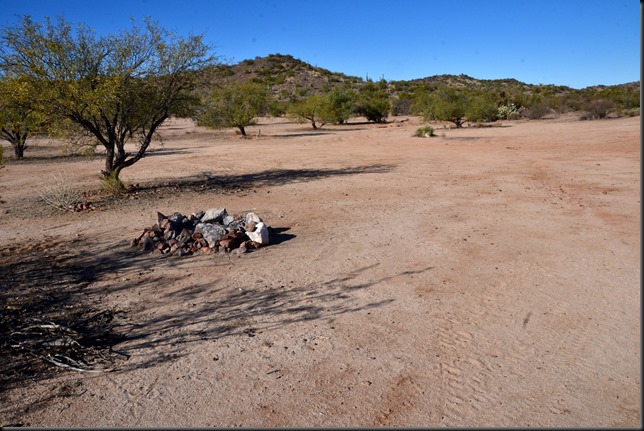 LOTS OF ROOM FOR THOSE BIG 40 FOOTERS OUT HERE 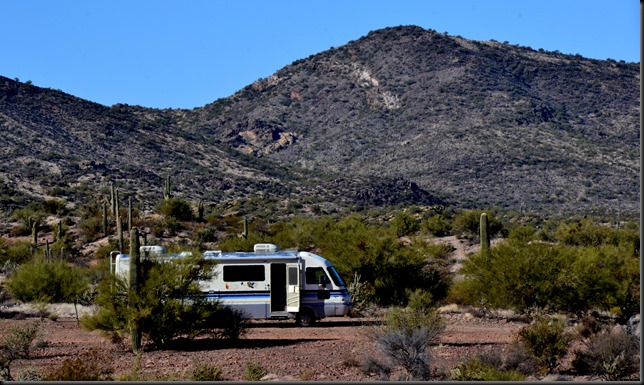 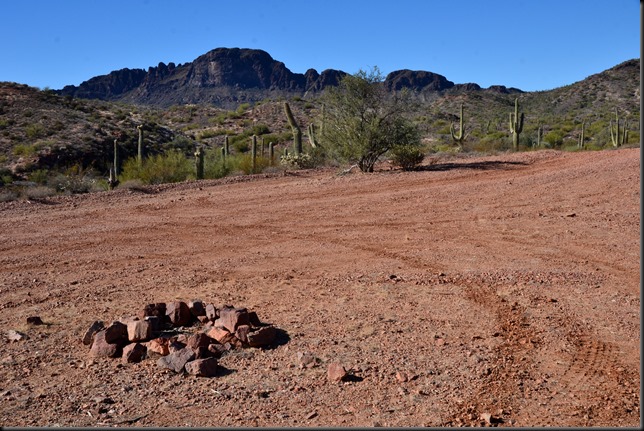 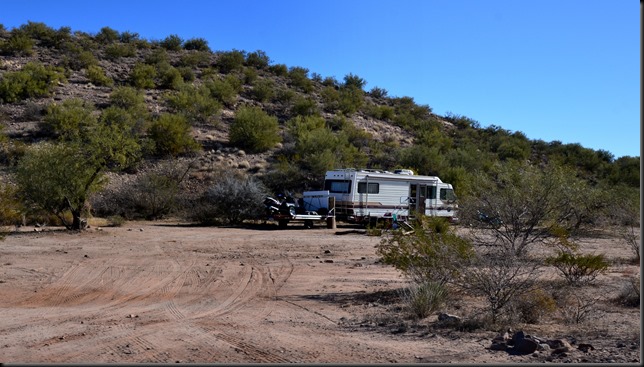 With the success of my first test post I quickly got to work on a full Thursday night post including photos.  Oh now nice it was to again be working with a superior & much easier to use Live Writer format again.  Takes me a fraction of the time to insert photos with OLW than it did with Blogger.  It was akin to having an old best friend back again.  Took me a bit of time but with a big smiley face I comfortably breezed right along & soon as I had my daily post done I hit the Publish button.......& immediately received a #403 error message & my post would not publish.  My elated Spirits immediately went into freefall.  We realized right away we had forgotten to un-install our old Live Writer program & we were stymied as what to do.  By this time my brain was totally fried & not functioning well at all.  It was late, I was tired & frustrated all over again & with that I had myself a mini-meltdown.  Had to shut down my computer & just walk away from it.  Kelly said she would see what she could do in the morning.  I said I never wanted to ever even see a %@!!!& computer ever again!! 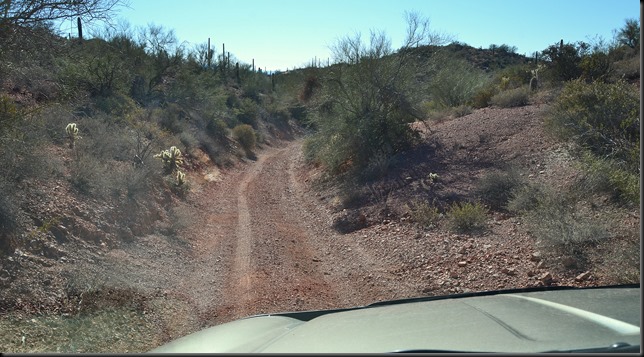 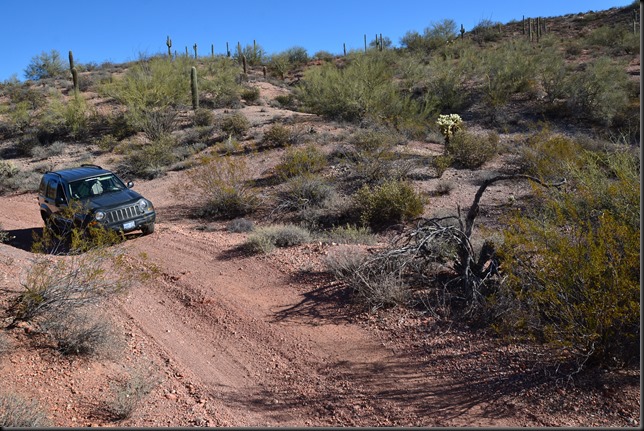 PHEEBS BACKED THE JEEP US SO I COULD TAKE THIS PHOTO 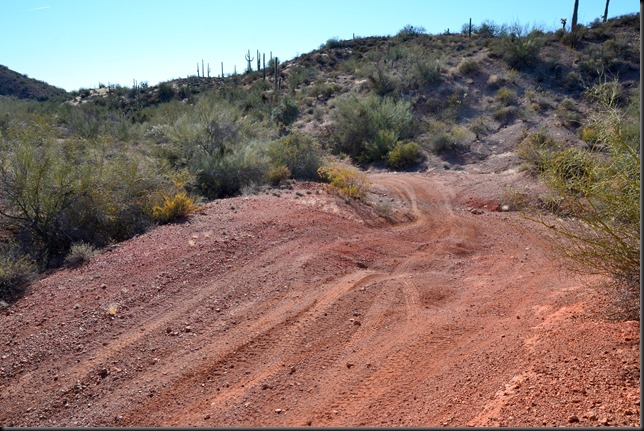 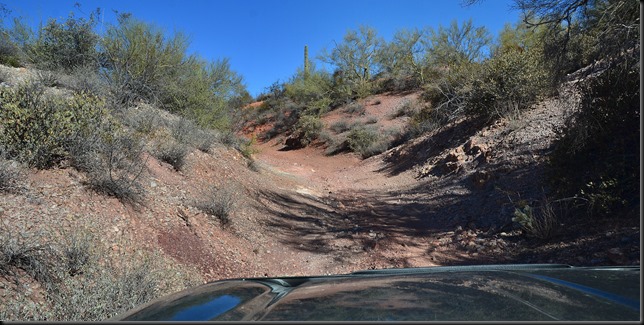 NOT MUCH MORE THAN AN ATV TRAIL IN SOME SPOTS

Woke up feeling just about the same as I did when I went to bed & knew the only way to get me out of the funk I still found myself in was to load up the Pheebs & take us for a nice quietley relaxing drive somewhere.  Didn't even want to look at my computer or think about blogging but curiously enough I tossed my camera into the Jeep just in case & away we went. 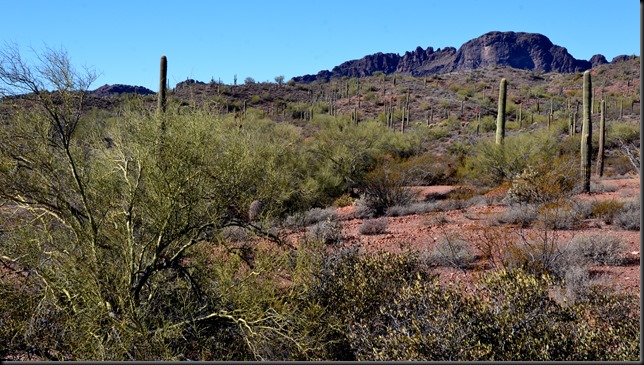 JUST ANOTHER GREAT MORNING FOR ENJOYING ALL THIS GREAT ARIZONA SCENERY 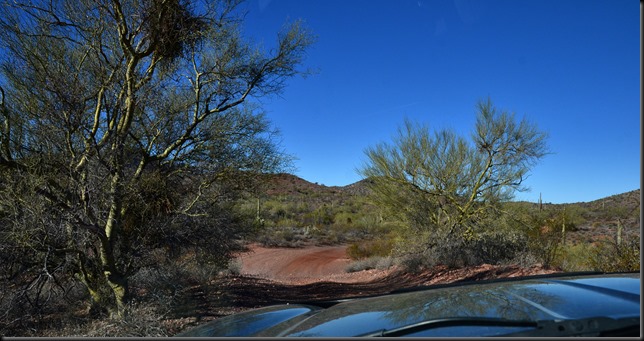 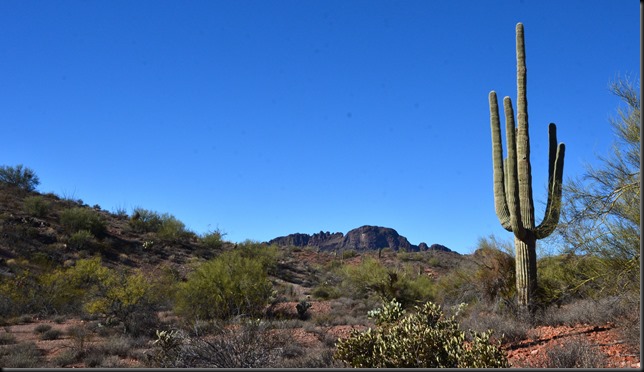 Had a few grocery items written down in my still damp laundrafied note book so figured we'd head to Safeway in Wickenburg.  As the distance increased between me & my computer the better I felt.  With less than a dozen items plus a coffee from Charbucks & 9 freshly baked & packaged Blueberry muffins Pheebs & I headed out of Safeway's parking lot & headed west out Vulture Peak Mine Road.  No we didn't eat all the muffins, just one.  I figured 9 muffins for $5 made more sense than paying $1.59 for one muffin over in the Safeway donut cabinet.  While waiting for my Starbucks coffee (in Safeway) I noticed they had muffins in their display case.  They were about half the size of my just purchased Blueberry muffins & the price of them just about floored me.  $2.85 for a muffin that didn't seem much bigger than a button!!  Yes I exaggerate a bit, but not much.

SPOTTED THIS OLD STONE FOUNDATION FROM A DISTANCE 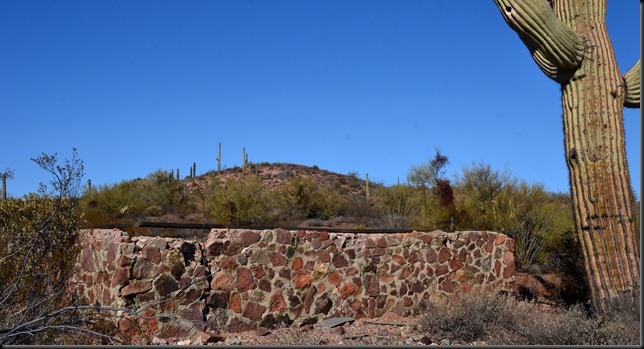 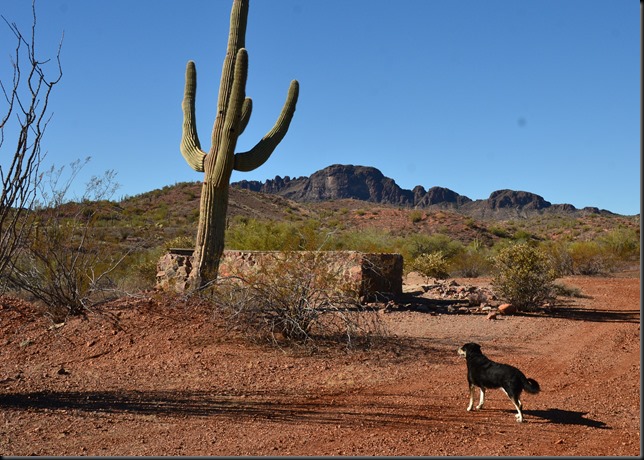 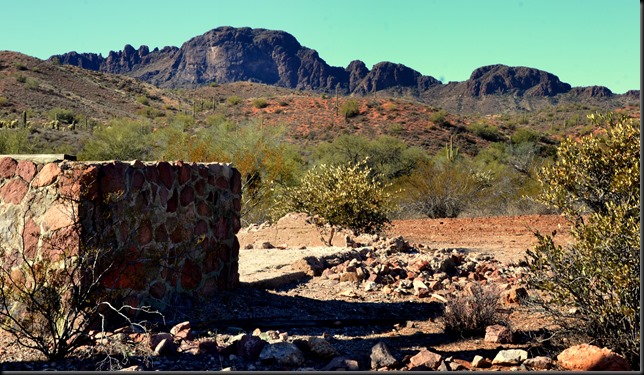 THE DESERT HOLDS MANY LONG AGO MYSTERIES

Being a bit familiar with a couple Jeep roads near a boondocking spot in the shadow of Vulture Peak Pheebs & I headed off onto Vulture Peak Road bumpily making our way along just east of Vulture Peak itself.  It was a beautiful windless sunny morning & warm enough for us to have both front windows down as long as we kept it under a hundred miles an hour:))

A CLOSE UP LOOK AT VULTURE PEAK’S EAST SIDE BELOW 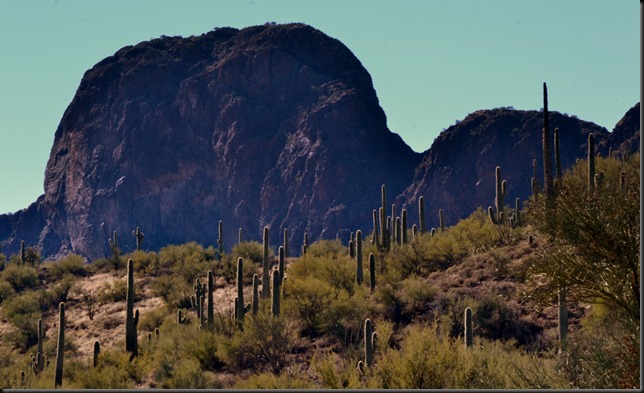 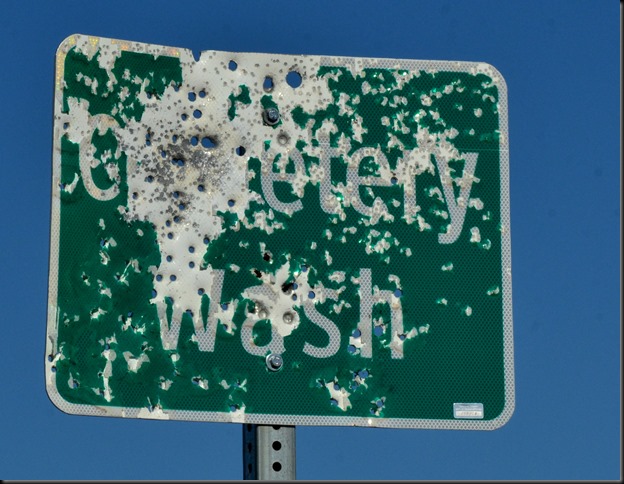 Stopped for a leg stretch & walk then headed off in a southerly direction down a twisty winding Jeep Road called Cemetery Wash.  Oh how nice to be surrounded again by some of Mother Natures finest scenery.  Mountains all around, hills of stately Saguaros & gardens of Teddy Bear Chollas.  With hardly a thought about computer program problems we jostled ourselves along about 10 mph in low gear & 4-wheel drive just enjoying all the ruts & bumps, ridges & sandy washes along the way.  Made it to somewhere between the 5 & 6 mile marker before deciding to turn around.  I was hoping the road might turn in the direction of Wickenburg or highway 93 south of Wickenburg but with the road seeming to deteriorate & persist in heading south I just figured heading back to Wickenburg made more sense.  Besides......it was lunch time anyway & hey if we had to go through Wickenburg anyway, well you know where the Pheebs wanted to go. 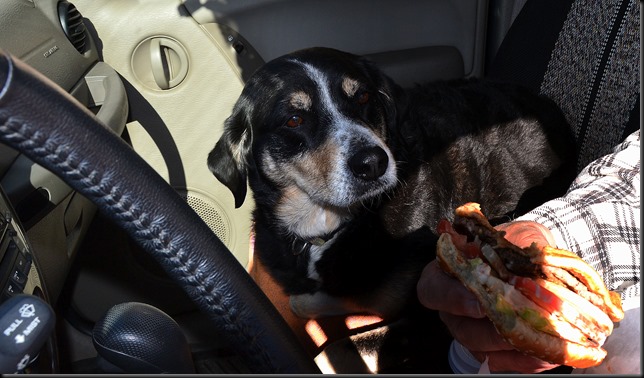 It was just after high noon when we made our way through Wickenburg's old western downtown to highway 93 & hung us a right turn around the round-a-bout.  Two minutes later we were in Burger King's drive-thru & gol darnut if we didn't up & Whopper ourselves again.  No fries this time just a Whopper.  Half an hour later we were back in Congress & home again.    Kelly had worked on the Open Live Writer/Blogger problem while Pheebs & I were gone & thought she had it solved.  But alas.........not quite. 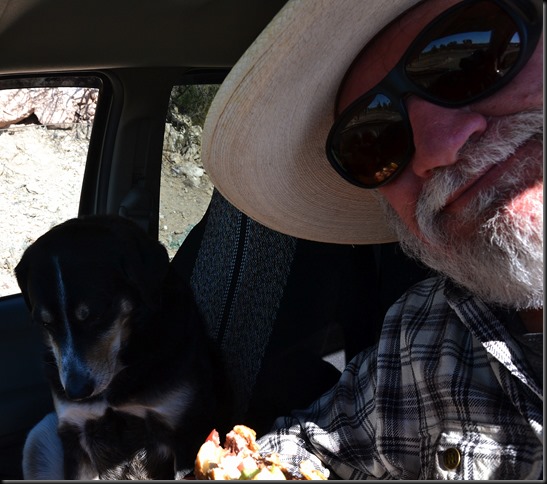 She had published my half finished Blogger post from Wednesday afternoon & not the  Open Live Writer post I had finished Wednesday night. Here is my updated Wednesday Yahooie Louie post.  When we tried to publish the completed OLW post it again returned the #403 error

A bit more research on the internet & Kelly came up with a final fix & it had to do with Picasa.  She created a new Picasa photo album file & hit the publish button.  We held our breath to see if the #403 error message would appear & it didn't.  My second & first complete Open Live Writer post published successfully about 20 minutes later (we have a slow internet connection here) & that's why you saw 2 similar posts today. (Thursday).  In the second OLW post I had added several more photos & an update paragraph at the beginning.  So GEORGE & KEVIN that's why you don't see your previous comments on the update post. 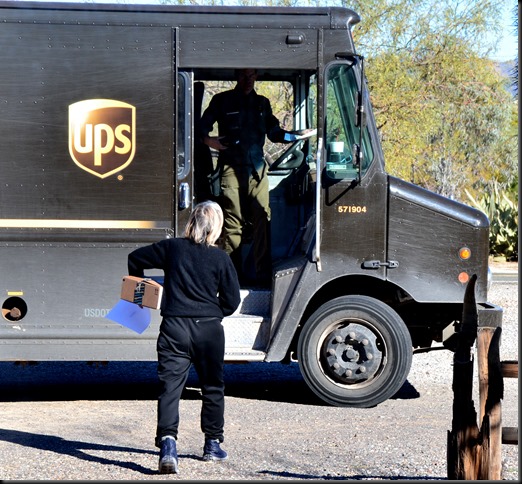 Well, if there's anybody left still reading I would be surprised after what is obviously a confusing post what with all this Blogger/Live Writer/Open Live Writer stuff happening.  I'm even confused writing it but I'm sincerely hopeful I can put all this behind me after tonight's post & we can get on with new things Friday.  And yes there is something new Friday. 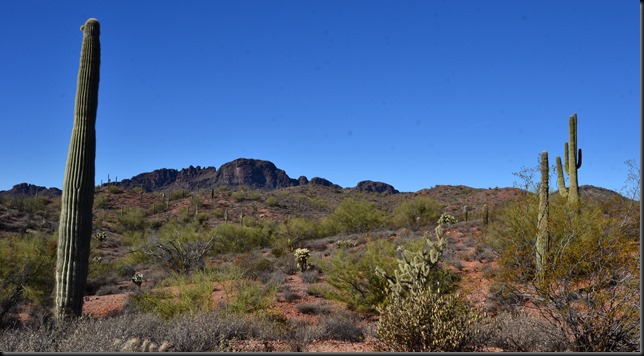 And a word of thanks to all the people who worked together in bringing back Live Writer resurrected now as Open Live Writer.  Whether you folks know it or not you have enabled countless thousands of us out here to continue our creative hobbies whether they be work related or just for pleasure.  Thousands & thousands of thanks from thousands & thousands of happy, happy, happy people.  And of course many, many, thanks to the one person who if it wasn't for her untiring patience, understanding, & encouragement, there simply would be no Bayfield Bunch blog plain & simple.  Oh I can still do the writing & photos Okay but it's Kelly who comes to my rescue when technical problems arise & my brain seizes up & refuses to co-operate with me.  She is the Gal who smooths the troubled waters when I throw my hat on the floor & jump on it.  Thankyou, Thankyou, Thankyou all:)) 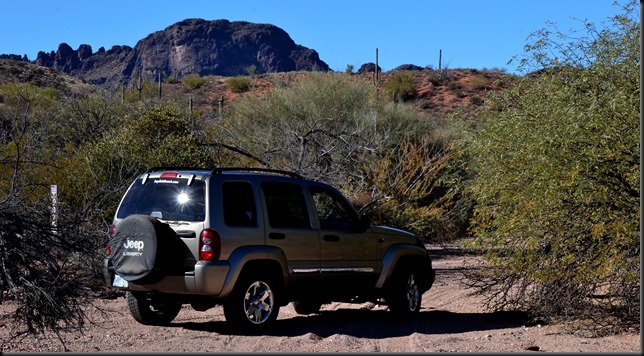