Kelly tweeted Scott Hanselman from ‘Open Live Writer’ Wednesday night inquiring when the new ‘Open Live Writer’ would be up & running.  Scott tweeted us back with a temporary link saying they were hoping to have OLW up & running over night.  I just published this with the link he sent us & it is working.  I will have more to say about all this tomorrow night

Tonight’s Yarnell Hill photos are the last pics of our Monday morning drive through Yarnell. 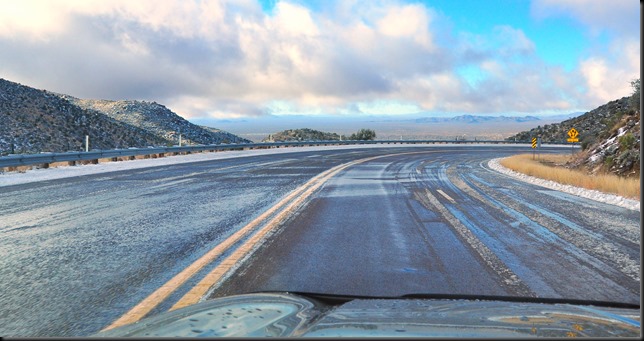 When we began our RV Travels back in the Autumn of 2006 we really didn’t have any plans or firmed up destinations.  Only thing clear was our preference to travel in the American Southwest.  Knowing very little about New Mexico, Arizona, & California I had it in my mind to see the Carlsbad Caverns in New Mexico somewhere & with that thought in mind we set off in that direction.  The rest of course is history as they say & we began our winter wanderings.  Here it is nearly 10 years later & as I look back I see we have spent the majority of our Snow Bird travels in Arizona with California coming in a distant second. 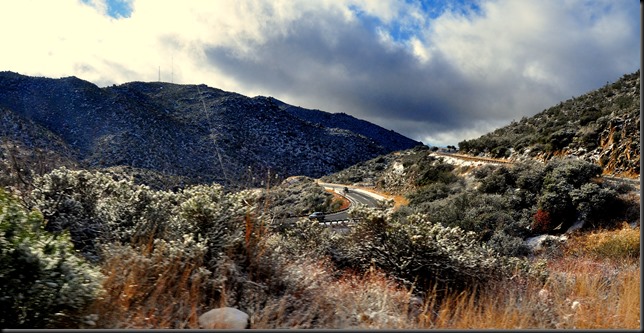 It was in December of 08 another RV couple met us in Yuma & said friends of theirs were looking for someone to do some ranch sitting.  In January we met the ranch owners in South-east Arizona near the tiny little dusty whistle stop called McNeal.  From that time until January of 2012 we spent several months each winter season ranch sitting.  It was a short couple months after rolling out of the McNeal area ranch in 2012 heading further west we stumbled across & bought our house in Congress Arizona.  So looking back now I would have to call Arizona our second home having spent the majority of our nearly 10 years here.  Starting out back in 06 we had no idea whatsoever what lay ahead of us or that we would end up spending the majority of our time in Arizona.  In fact I’m surprised we have been traveling the South-west for as long as we have.  Who knew. 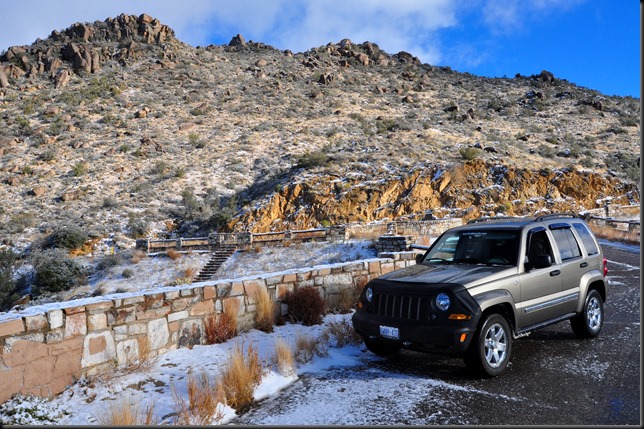 STOPPED & TOOK A FEW PICS FOR A SCENIC OVERLOOK 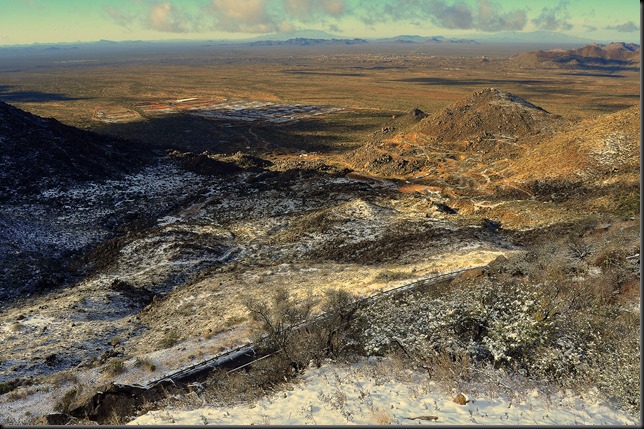 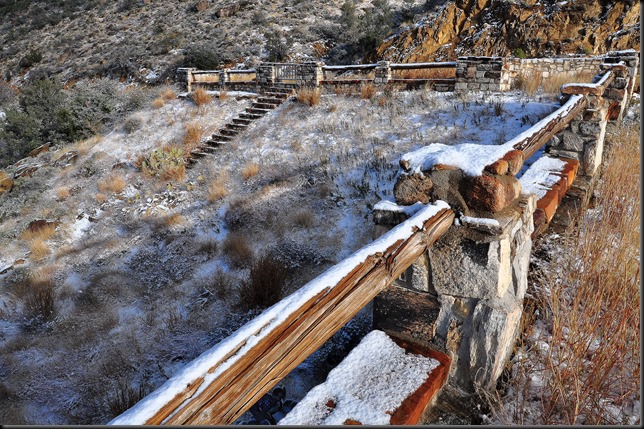 It goes without saying what has attracted us here to the deserts & mountains of Arizona, New Mexico, & California & at the risk of repetition I’ll repeat just a few of those reasons again.  First & foremost for us was & still is the overall beautiful scenery which I have gone on & on in my posts each & every year about.  Next of course is the weather.  Neither Kelly or I like hot & humid weather so that rules out traveling south of the U.S. border & not liking bitter cold & snow is what drives us out of Canada each Fall.   Yes it can get overly hot here & cold here from mid October to the end of March but in between we are able to enjoy the near perfect weather which we both enjoy.  And just think, no pesky bugs or biting insects, no torrential rains, no tornados, no hurricanes, no prolonged cloudy gray skies, no Allimagators & no active poisonous snakes out & about during the winter months.  And here’s a biggy, a whole lot less people & traffic congestion found in many other States. 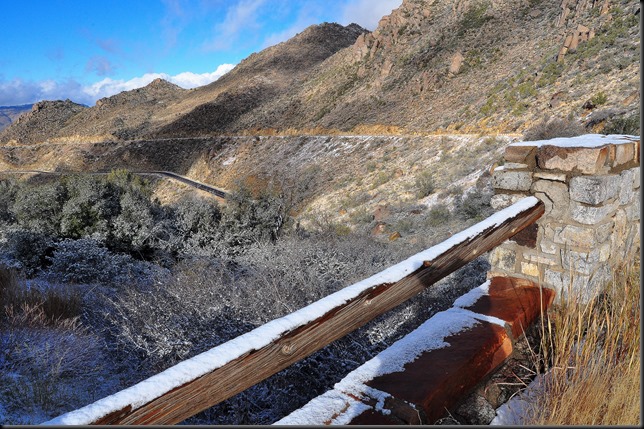 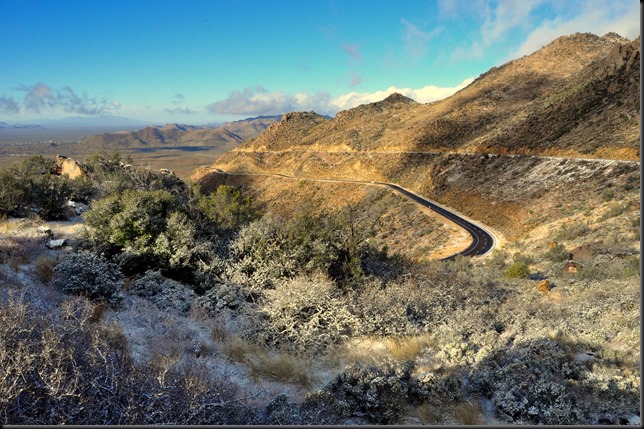 Parts of the old wild West are still alive in many areas of Arizona & for me that has always been a main attraction as well.  Cowboys on horses are real & I never tire of seeing them on horseback wherever it may be.  I have mixed feeling about some of the lax laws but one just has to adjust to a lot of the old tumble down houses & properties found in so many smaller towns & outback areas.  I guess you could say that it lends itself to the ways & times of an era almost gone but hardly forgotten. 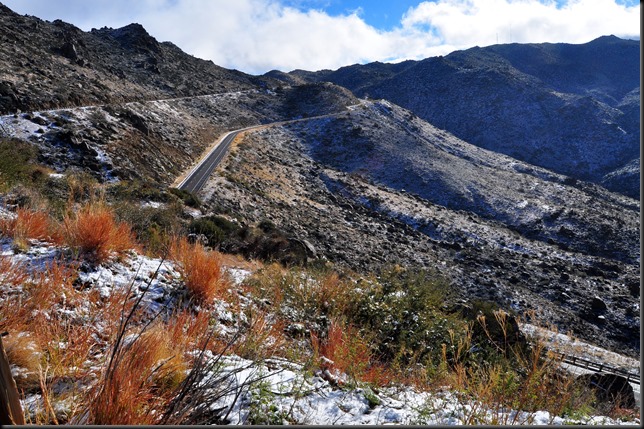 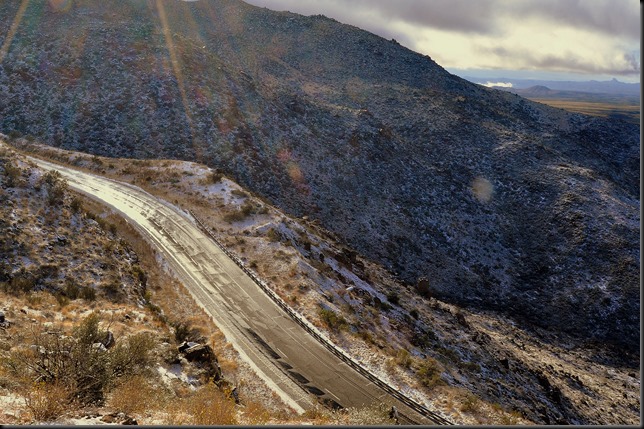 HIGHWAY COMING UP THE YARNELL HILL 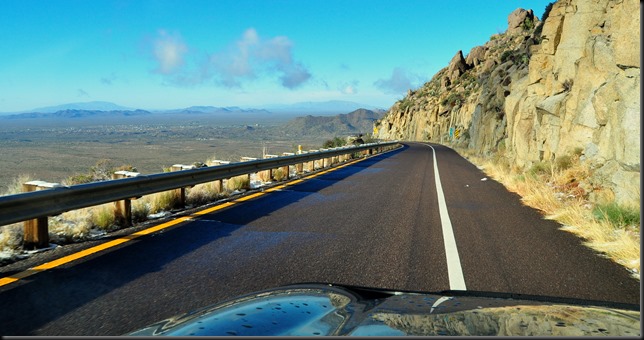 HEADED DOWN THE HILL 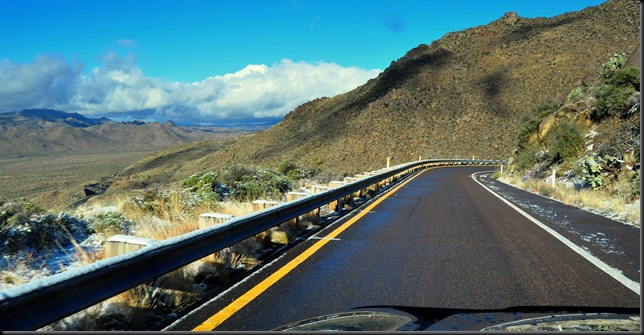 ROAD IS STILL WET FROM THE MORNINGS MELTED ICE

I’ve often thought if Utah had had a more favorable winter climate we could have easily ended up there as well.  It’s still my favorite scenic State.  If California wasn’t so expensive we may have spent more time there over the years & again if New Mexico had a warmer winter climate we might have ended up settling in that State as well.  But Arizona it is & we do like it here despite a few cold spells now & again.  For me I much prefer doing things outside in cooler weather as opposed to hot & humid.  But that’s just me:)) 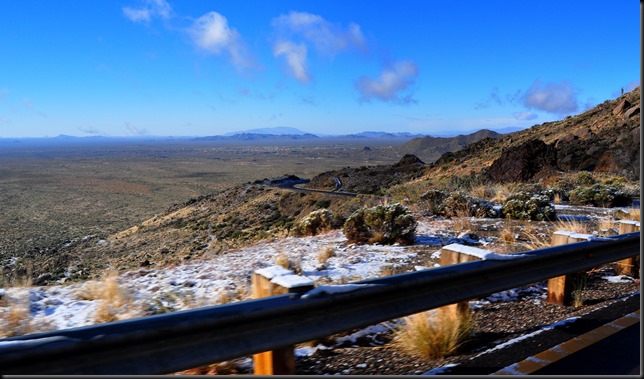 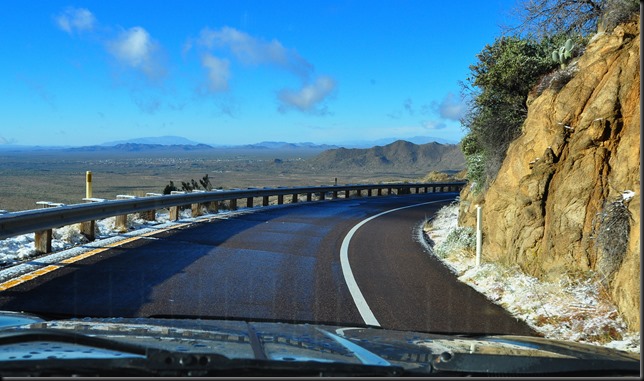 Kelly tried her best with the new Lenova laptop computer but this morning she packed it up in it’s box to be returned to Amazon.  The straw that broke the Camel’s back was the computers difficulty connecting to the Internet.  My Toshiba sitting right beside the Lenova had no problems connecting while the Lenova kept dropping the connection.  Researching the internet on her older Acer lap top she learned the connection problem is inherent with the model she had.  Even with Kelly’s oceans of patience the writing was on the wall & she had had enough.  So disappointing after all the hours she spent first having to re-install a bad Windows 10 install plus setting up her computer account & transferring a bunch of data.  Wasn’t until she had done all that that she discovered the connection problem.  Not often if hardly ever I see Kelly discouraged……but I saw it this morning:(( 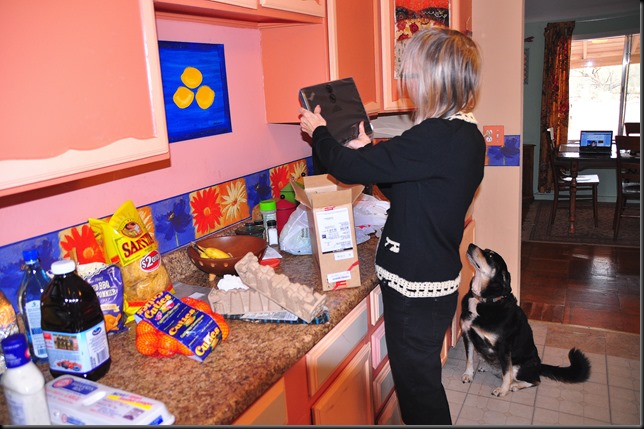 KELLY UNPACKING HER NEW LENOVA LAST FRIDAY….TODAY SHE PACKED IT UP TO SEND BACK

GROANER’S CORNER:(( There were two blondes who went deep into the frozen woods searching for a Christmas tree.
After hours of subzero temperatures a few close calls with hungry wolves, one blonde turned to the other and said,
"I'm chopping down the next tree I see. I don't care whether it's decorated or not!"

Q. What did Adam say on the day before Christmas?
A. It's Christmas, Eve.

Q: What is a webmaster's favourite hymn?
A: Oh, dot com all ye faithful!