THE STORM THAT NEVER HAPPENED & I FOUND ‘CORNER GAS’ AGAIN:)) 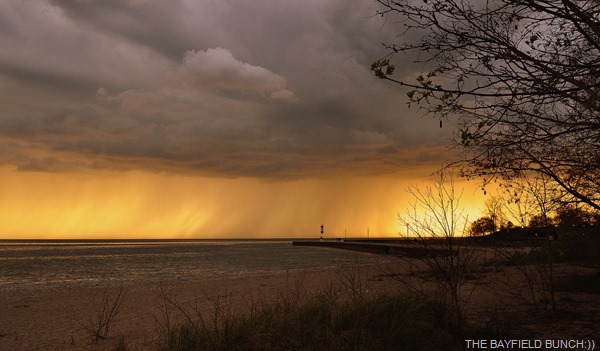 SHEETS OF PROBABLE RAIN ON THE HORIZON

Noticed Monday night after checking our computers weather channel a small fast moving storm cell galloping across Lake Huron with Bayfield dead in it’s sights.  Grabbed my cameras, loaded up the Pheebs & headed for the harbor to see if we could get ourselves a few photos. 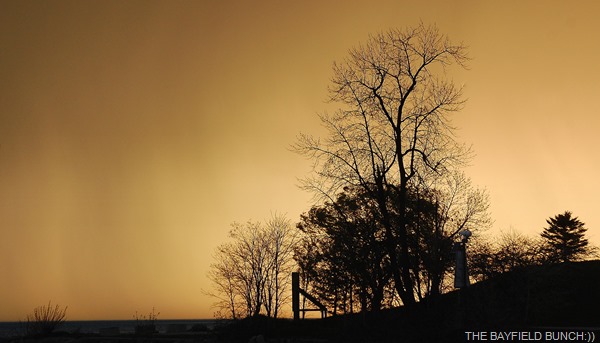 LOOKING OVER TOWARDS THE END OF BAYFIELD’S NORTH PIER
Dark clouds out over the lake with what appeared to be large volumes of rain were sweeping across the horizon against a deepening yellow sky.  Wind picked up substantially with flecks of rain.  Thought we might be in for a good one but it was not to be.  Nothing came of it & I suspect either the storm swung north or simply dissipated out over the lake somewhere before reaching land.  Half an hour later skies cleared as Monday's sun calmly edged closer to the horizon finally sinking slowly into the vast watery expanse of Lake Huron. 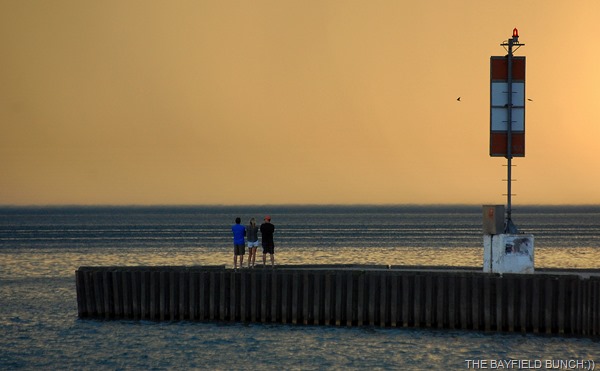 A FELLOW PHOTO BUFF SETS UP ON THE BEACH 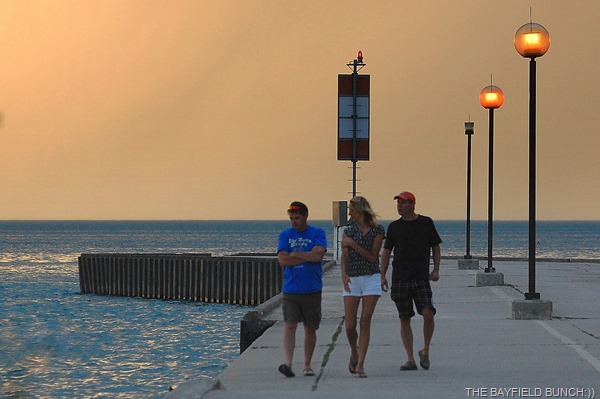 WITH STORMY SKIES LIGHTENING THE 3 PIER FOLKS HEAD BACK IN & WITH TEMPS PLUMMETING I’LL BET THEY’RE FEELING THE COLD WIND BLASTS
Thankfully for me Monday night's weather drove out the day's miserable humidity & dropped our temperatures into a much pleasanter zone for today.  However it did over compensate for the heat & tonight our temps are predicted to go down to the freezing mark.  Sure has been a crazy Spring.  Monday we had the A/C running & today it was the furnace!! 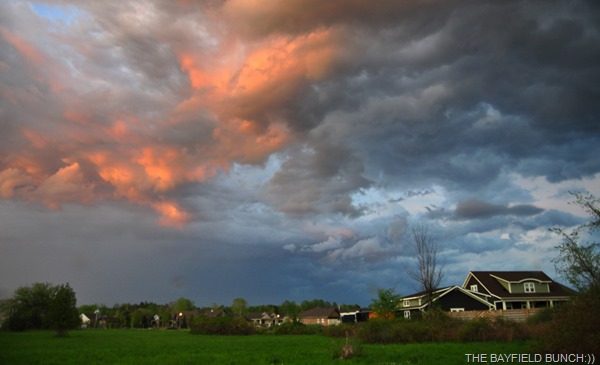 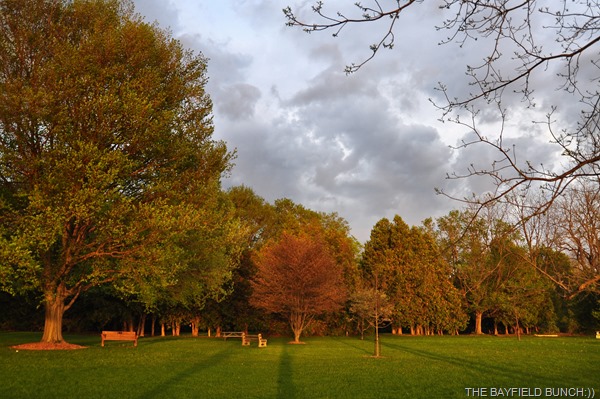 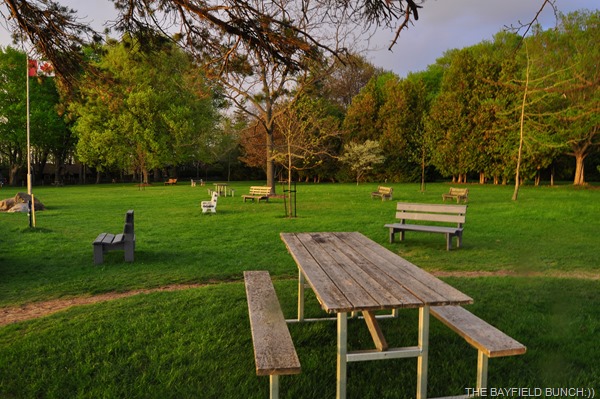 Kelly headed off to Goderich to do some banking & stuff so Pheebs & I headed off to do some gravel running.  Not too far mind you but we were out long enough to grab us carrot muffin & go for a walk in an old gravel pit.  Sure was glad I had a warm jacket in the Jeep. And it was nice that Monday's pesky gnats & mosquitoes were grounded because of colder weather today.  I love it when the insects are grounded. 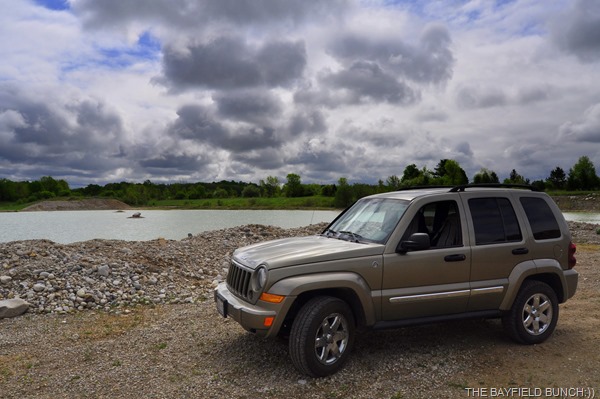 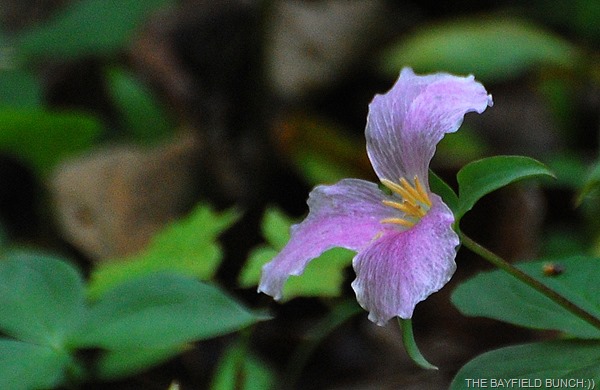 The more I am driving the Jeep Liberator the more I am liking it.  Out of an old manual downshifting habit I still have a tendency to rest my right hand on the automatic gear shift when slowing down but I have not lifted my left foot to depress the clutch yet.  Certainly am enjoying the better sound system as well & oh how I love those two extra doors & that extra space behind the back seat.  Pheebs now has her own back doors to either enter or exit the vehicle as well.  Makes me wonder why we didn’t maybe move to this kind of a set-up sooner.  Also am enjoying the smoother ride which I credit the larger tires with.  I guess the true test will be to see how Libby performs in the deserts of the Southwest later this year.  With basically the same 4x4 off road system as the Wrangler I think she will do just fine. 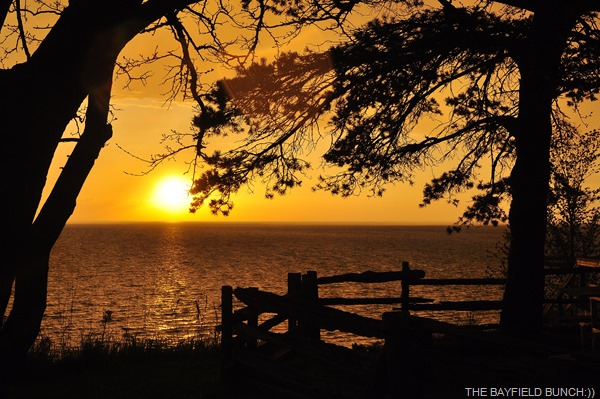 Most week day mornings at 8 a.m. I can now be found in front of our television.  Yep, discovered a few weeks ago that all the Corner Gas re-runs are now on in the mornings.  Despite seeing probably most if not all the episodes over the years I still enjoy dropping in on the Dog River gang whenever I can.  It’s a great way for one to take one’s mind off all the worldly woes for half an hour each day:))  Here is a link to my post about the day we dropped into Rouleau (Dog River) Saskatchewan on October 8th 2014.  A SAD FEELING COMES OVER ME AT THE CORNER GAS SITE 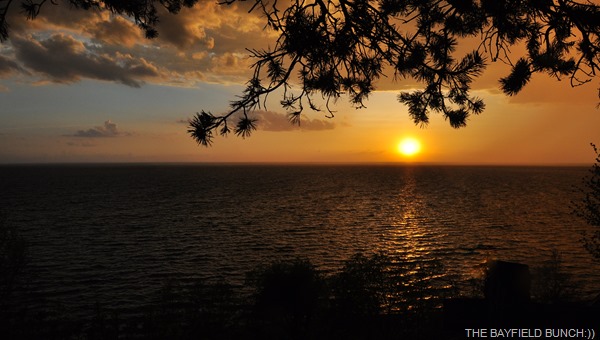 GROANER’S CORNER:((  A father spoke to his son, "It's time we had a little talk my son. Soon you will have urges and feelings you've never had before. Your heart will pound and your hands will sweat. You'll be preoccupied and won't be able to think of anything else." He added, "But don't worry, it's perfectly normal ... it's called golf."