We were in no hurry this morning but it’s still hard to break old habits & we were both again wide awake & all bushy tailed by 6 a.m.  Internet connection was good so I was able to peruse a few blogs & leave a few comments for a change.  Aunt Jean on her early morning walks can see the constellation Orion in the sky but I was thwarted from seeing it this morning by a heavy cloud cover overhead.  However I did catch a sunrise over Weyburn. 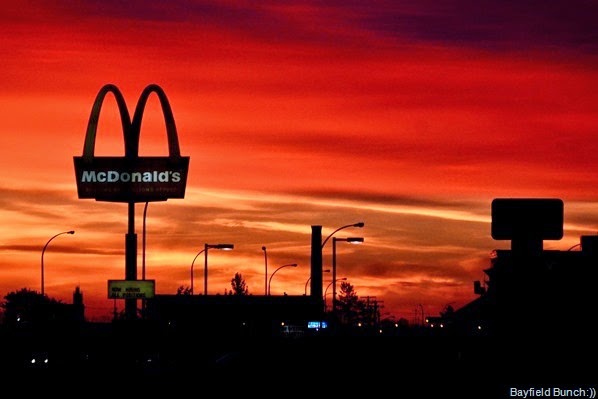 With no idea of what to expect at the former CORNER GAS TV sitcom & recent movie site we slowly moseyed our way up highway 39 to Rouleau Saskatchewan & how nice it was to FINALLY have a day with no heavy headwinds to do battle with.  Not too bad a weather day actually.  Sun & cloud & not freezing cold.  Highway 39 runs between Weyburn & Moose Jaw. 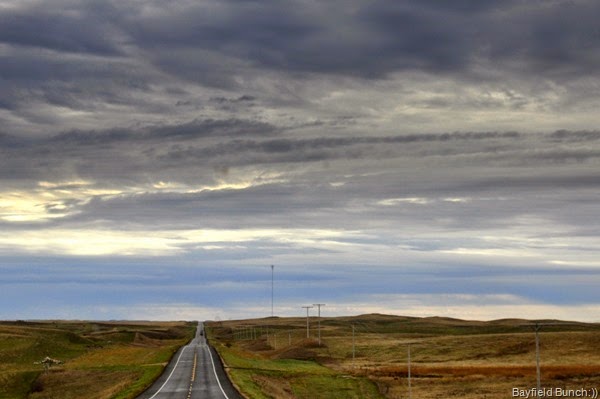 If your afraid of heights you had better steer clear of Ivan’s latest post.  He’s literally got himself ‘hangin out’.  With summer employment now over he & four footed Hailey will soon be on the road south.

Here’s an interesting article GEORGE sent us a few days ago regarding Canadian Snow Birds & property/home owners in the States.  FREE AS A SNOW BIRD? MAYBE NOT  More rules & tightening regulations coming down on we Canadian folks who enjoy our time south of the border.  We see some hand writing on the wall here which causes us to pause & gaze into our sometimes forward thinking but often foggy crystal ball.  May be looking at some decisions soon………….. 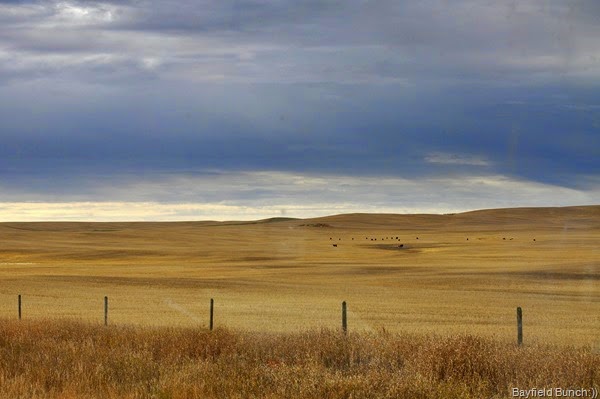 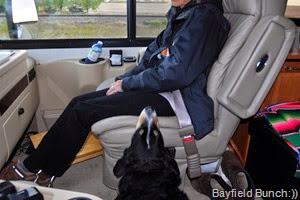 HEY MOM HOW’S ABOUT IT’S MY TURN IN THE FRONT SEAT OK……..

Rolled into the little town of Rouleau Saskatchewan around 10.  No problem finding the  site.  I had already checked it’s location on Google Earth.  Approaching the movie set I could already see there was no activity there.  Windows were boarded up & the buildings were abandoned.  Well why wouldn’t they be, the series was over way back in 09 & the movie wrapped production back at the end of July.  Parked the rig on a gravel road beside the derelict buildings, got out & walked over.  I already felt a forlorn sadness growing. 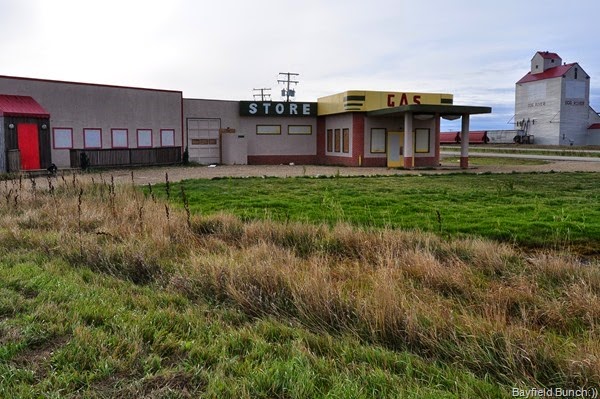 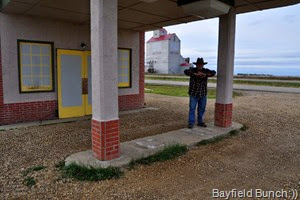 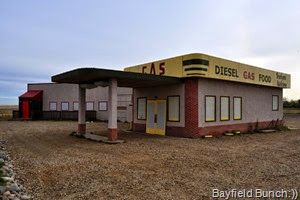 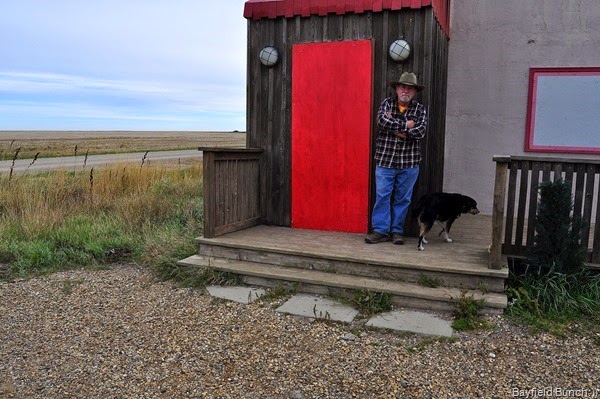 I THINK THE ‘RUBY’ IS CLOSED FOREVER:(( 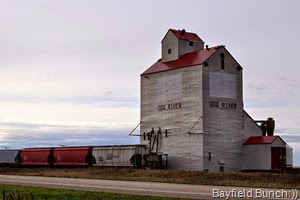 I heard someone had bought the set & opened a Corner Gas gift shop inside.  It was obvious the shop had closed & it’s understandable.  Who’s going to come here.  I was overcome with a level of sadness as I walked around ‘The Ruby’ & the ‘Corner Gas station’.  Grass growing up here, an old Pizza box there along with other bits of litter.  Couldn’t even look inside anywhere.  I had had visions of maybe being able to go inside the Ruby this morning & sit at the counter where the gang gathered, maybe even sit at one of the booths.  My sadness deepened & I had a hollow feeling.  I knew seeing the set like this was to be totally accepted & yet…...  Took me a little while to understand where my overall sadness & disappointment was coming from.  Then I clued in. 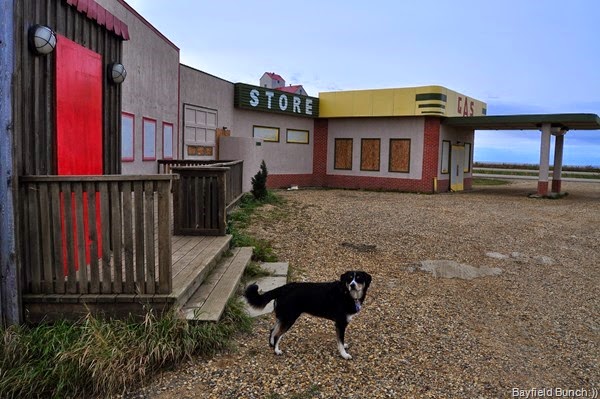 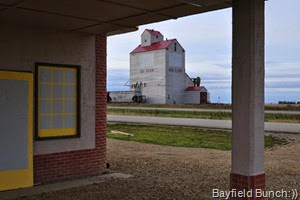 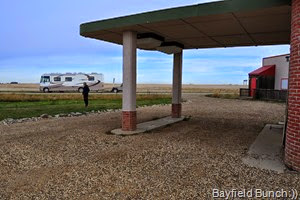 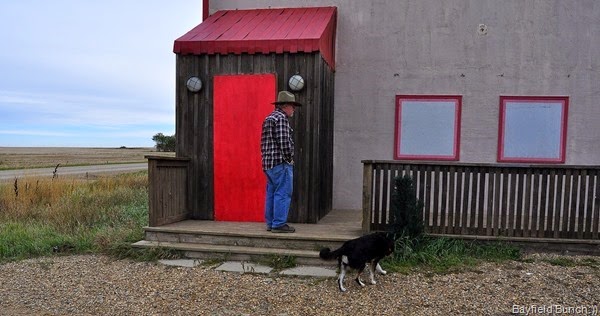 Watching Corner Gas for the past 3 or 4 years in it’s re-runs I had like many fans become a part of the gangs ongoing shenanigans & buffoonery.  No matter what was happening in the this crazy frightening world or my life I knew I could always take half an hour out of any week day & catch Lacey, Hank, Brent, Davis, Karen, Emma & Oscar at their comedic best.  Standing in front of the Ruby today remembering all the tom-foolery that went on here & all the great happy feelings I felt with each episode I knew why I was sad.  The heart of Dog River was gone, the fire was out & I was standing in the stark hard cold reality of what once was a bustling happy place.  But hey, the happiness will live on forever in all the episodes & upcoming movie to be released December 3rd. 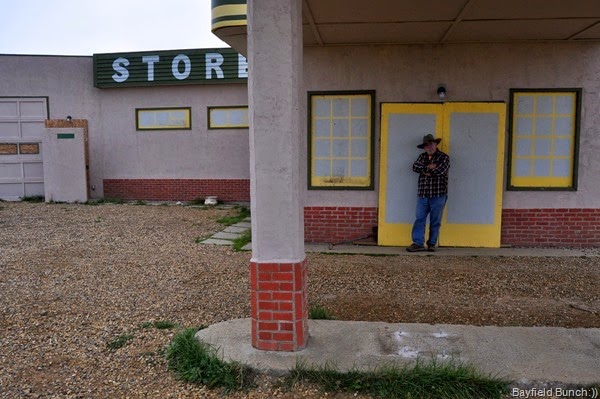 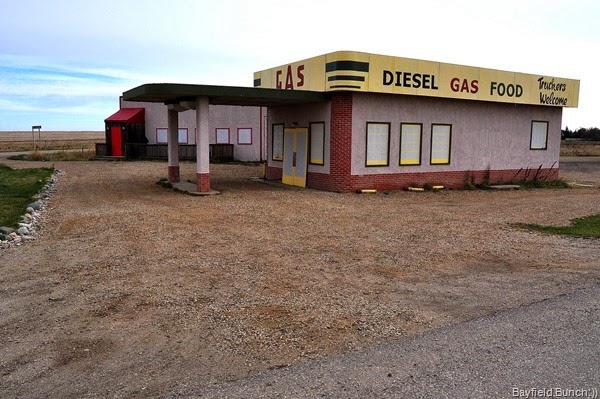 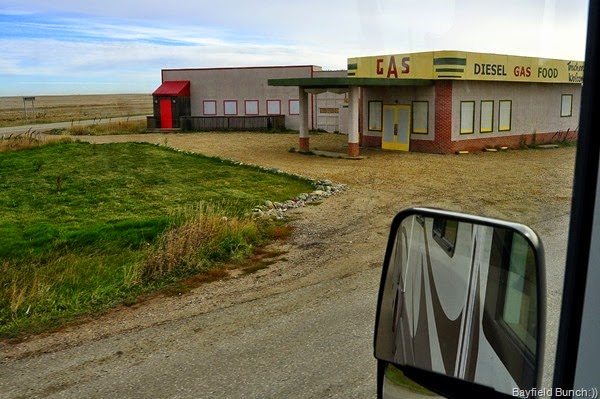 BYE BYE CORNER GAS, YOU WILL LIVE ON IN THE HEARTS OF ALL YOUR FANS

It was about a hundred miles from Rouleau Saskatchewan to the U.S. border.  Rough road for much of the way.  Just a border crossing station in Regway & nothing else.  No town, no houses, no nothing, just the station.  Two 18 wheelers ahead of us for less than a 10 minute wait.  Two border guys waved us up.  Nice young fella stood outside my window & asked the customary questions while the other fella ran our passports through a computer.  Fellow talking to me asked if he could come inside & I said yes.  Soon as he came in the door whatever other questions he had were over.  He spotted Pheebs & right away he & Pheebs were best Pals.  Pheebs really knows how to turn on the charm.  Everybody who meets Pheebe loves her & the border guard was no exception.  In fact he even wished me a happy belated Birthday.  Had seen the date on my passport I guess.  He talked to the Pheebs for half a minute then wished us a good trip.  We were on our way & finally back in the good old U.S. of A:))  Time was 11:55 a.m. & we were in Montana. 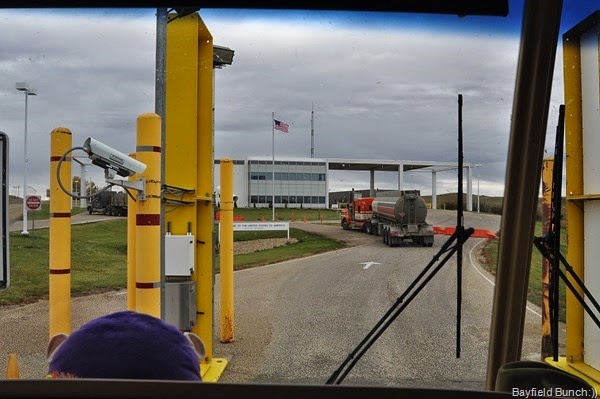 OUR FRIENDLIEST BORDER CROSSING EVER:))

Took our leisurely time heading due south stopping in a little town called Plentywood for a load of fuel.  Less than an hour later we crossed into North Dakota heading for a place called Williston.  Found us a level spot in a Walmart & shut er down for the day.  I think Tuesday’s battle with the wind still had a grip on us.  We was whupped & Kelly is down with a sore throat & not feeling the best.  In the morning we will head south to the Black Hills area & Custer South Dakota.  Plan to spend some time there seeing whatever it is we can see.  Had this post almost set to go Wednesday night but all of a sudden ran into an unexpected electrical problem with our rig concerning the Inverter. 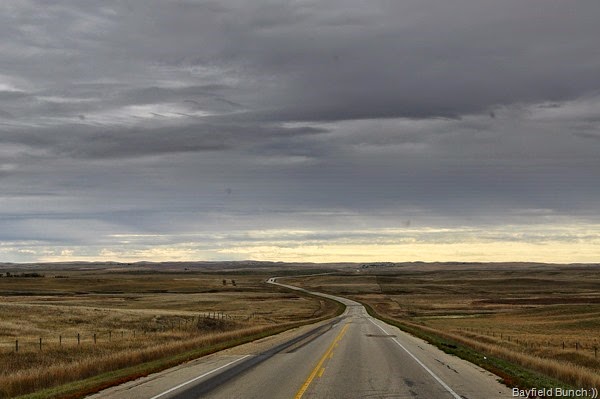 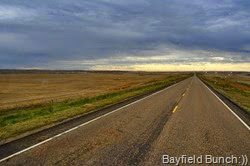 We had noticed earlier in the day the rig’s battery was getting weaker starting the rig right up.  Then parked in Williston our water pump quit working.  Also noticed none of our in house electrical plugs worked.  Couldn’t charge the laptops & mine was out of juice.  Kelly pressed the inverter button & our dash radio quit working.  Outside steps wouldn’t come out.  Our 110 electrical system was stone dead.  And when I tried to start the rig it was stone dead as well.  Luckily we have a ‘battery boost’ switch on the dash & I was able to start the rig using the house batteries which the panel showed fully charged.  Now what to do:(( 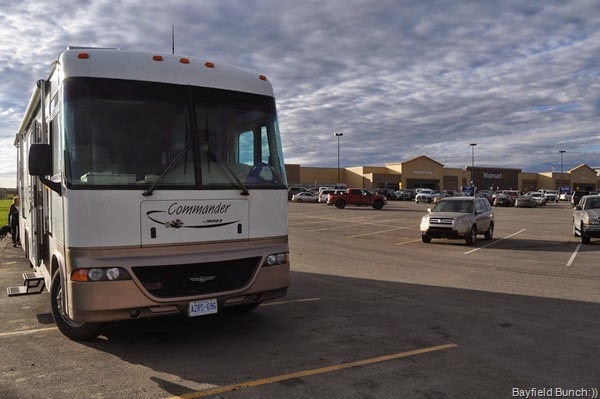 Needless to say we were just sooooooo totally discouraged & depressed that something we didn’t understand had gone wrong again.  Didn’t want to take a chance on using our furnace so we spent a very cold night.  We were so down in the dumps we even talked of just cancelling our whole trip & heading back to Bayfield.  Decided to get some sleep & make a decision in the morning……………………. 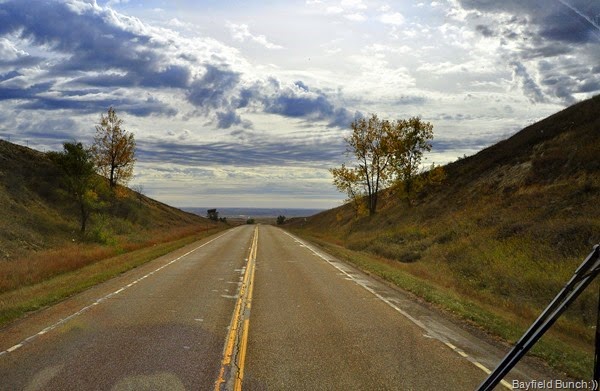 GROANER’S CORNER:(( On my first day working at the gas station, I watched a senior co-worker measure the level of gasoline in the underground tanks by lowering a giant measuring stick down into them.  "What would happen if I threw a lit match into the hole?" I joked. "It would go out," he replied in a very factual manner.  "Really?" I asked, surprised to hear that. "Is there a lack of oxygen down there or some safety device that would extinguish it before the fumes ignited?"
"No, the force of the explosion would blow out the match."