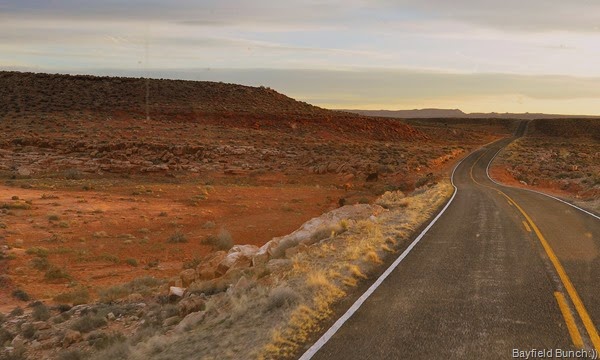 HEADED OUT OF GOOSENECK STATE PARK THIS MORNING

I have never seen the night sky as clear & wonderful as I saw it early Sunday morning from here at Gooseneck State Park in southeastern Utah.  It stretched from Cassiopeia in the northeast right down through Sagittarius to the southwest with the greatest glowing concentration of stars running through the Teapot’s spout.  Sagittarius is shaped like a slightly tipped teapot.  And for the first time I saw how the Milky Way even fanned out touching the Scorpions (Scorpios) tail.  Truly a marvelous site & it wasn’t even cold out at 6 a.m. Utah time. 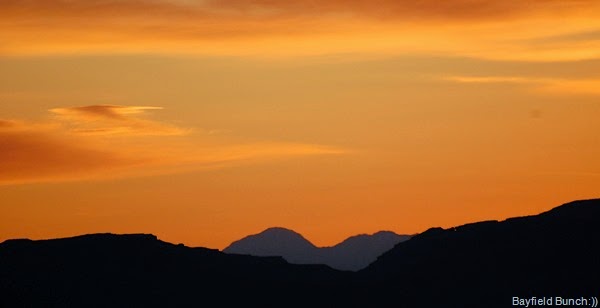 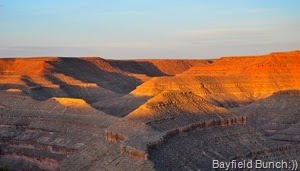 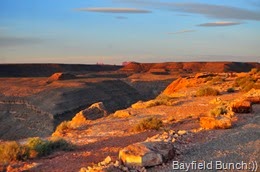 Rolled out of Gooseneck just after sunrise & headed a short distance over to the west entrance at Valley Of The Gods.

We remembered a large parking area there so pulled in & un-hooked the Jeep.

We had heard about a scenic 3 mile section of highway known as the Moki Dugway & wanted to Jeep up to the top & back down again.  Highway 261 is paved except for the graveled Moki Dugway.   Dawns early light unfolded across Canyon of the Gods lighting Cedar Mesa’s steep cliff walls as we began our ascent.  The views immediately became stunning as we made the first of 3 photo stops on the way up.  What a great drive this is as long as your not afraid of heights.  Hair pin turns, blind curves, & steep grades make it a great drive.  Just a nice way to adventurously start another day. 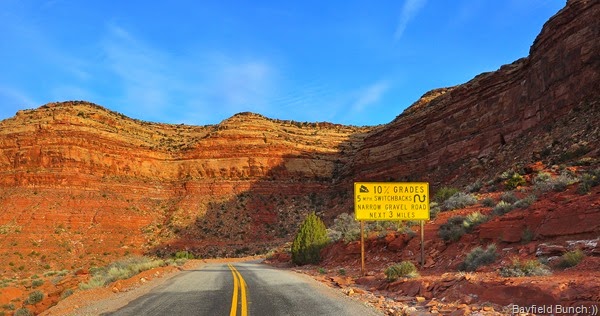 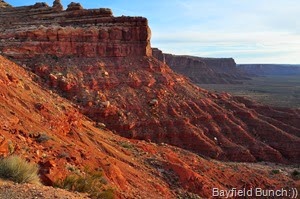 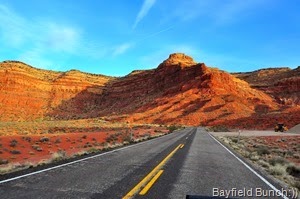 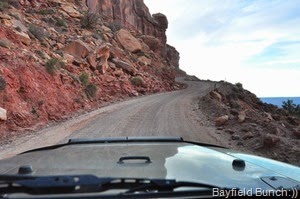 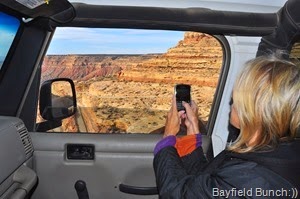 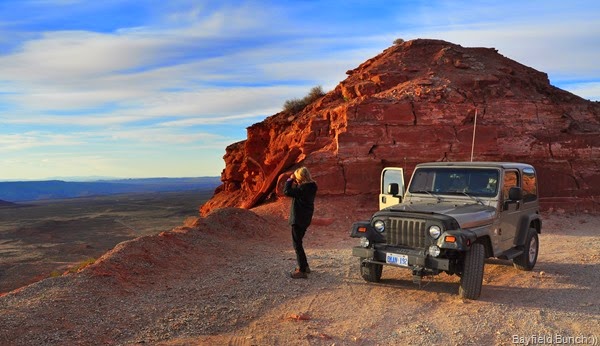 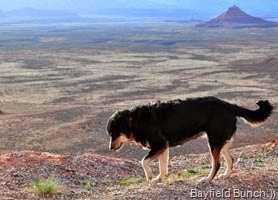 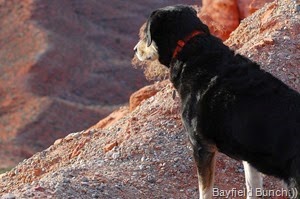 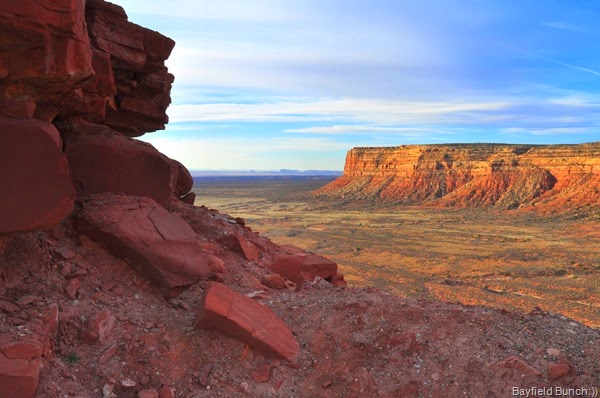 Reaching the top we took a short drive on a road along the Mesa’s top, turned around a began our descent.  Although signs discourage large vehicles from driving the Moki-Dugway I could see where it was doable even in a large Motorhome if you have the power for the grades & simply took your time.  This was verified when we past a mid-size Class C coming up the grade & later super verified when we saw a big full sized tour bus heading up the Moki-Dugway.  I’m guessing the red car going slowly in front of the bus was acting as an out front safety vehicle on the blind curves.  Just guessing. 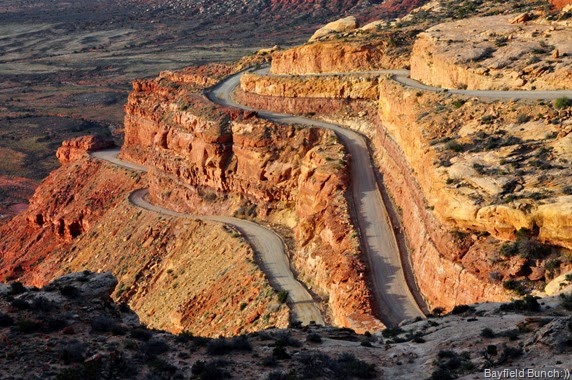 Anyway if anyone is in the area of Mexican Hat Utah there’s a truly scenic drive for you with great views out over the Garden Of The Gods far below.  I have included only a few of my Moki Dugway photos & maybe over the next few days I will post more of them.  Just too tired tonight to do much more of anything. 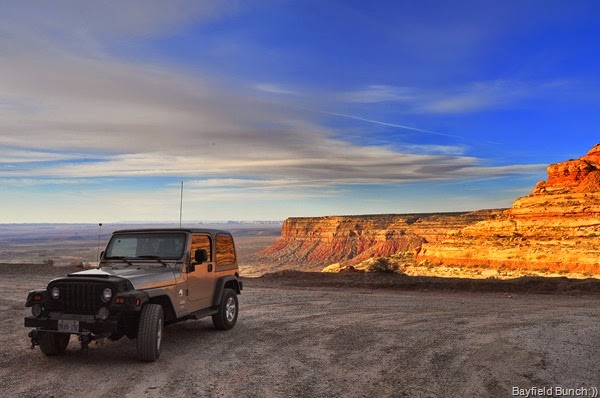 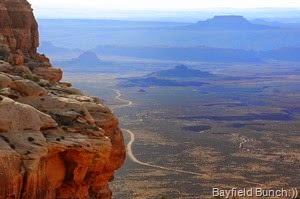 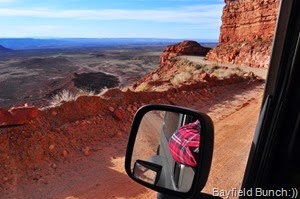 We did Jeep a short distance into Garden Of The Gods to see if we could find a suitable boondocking spot but it was not to be.  No Verizon out there anyway.  Hooked the Jeep back on, retraced our steps past the turn off to Gooseneck & at the first stop sign turned left back onto highway 191.  Less than 20 miles up the road we knew of a spot known as Sand Island so it was there we headed.  Nice spot but being Sunday all the available spots on the Colorado River were taken.  From there it was just another few miles to Bluff Utah where we pulled into the Twin Rocks Trading Post center to check for an internet signal.  Signal was there but very weak so we moved on. 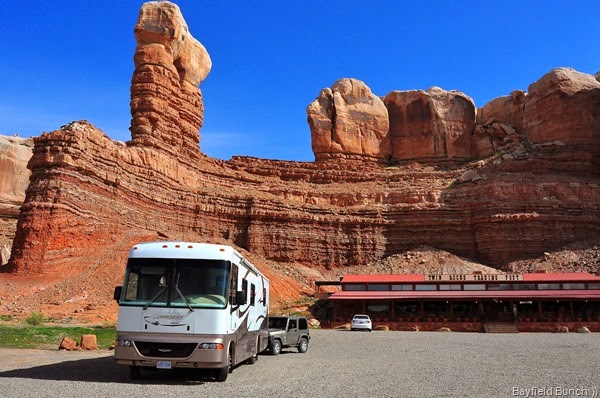 Next town on route was Blanding & we found the Visitor Center there & pulled in for a break.  Strong internet signal so that is where I finished & published my Saturday post.  While there a Lazy Daze Class C pulled in & parked beside us.  A lady got out & came right to our door.  “Hey, you’re the Bayfield Bunch” she said.  Turns out this lady is a regular Bayfield Bunch reader.  Her name was Dorothy & her husband’s name was Don & they are from Alabama.  Had ourselves a wee chat & as it turns out they prefer the southwest for traveling & RV boondocking too.  Being an adventurous couple they have had their Class C Lazy Daze up & down the MokI-Dugway.  You can follow Dorothy & Don’s adventures here at Traveling Dorothy. 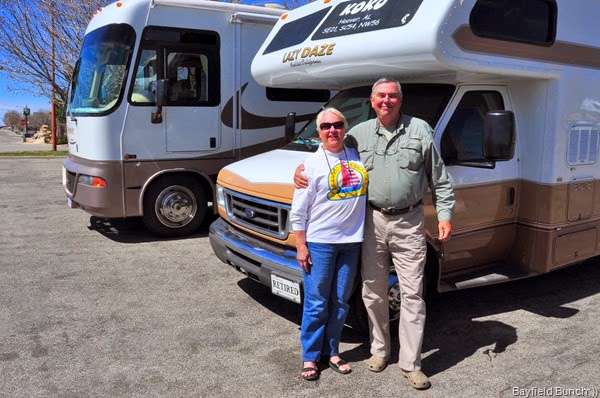 We decided to head on to Monticello where we knew of a spot in the town we could overnight.   Same spot we stayed in on the way to Congress last October.  North of Blanding is a very long grade that just seems to go on forever & although we were going uphill our day began going downhill again when we experienced the same loss of power we experienced just a few days ago.  Engine light on again & we barely crawled into Monticello.  So we are back to the square root of one again.  I was sure hoping the problem was the fuel filter but obviously not.  There is no way we can ever get through the Colorado mountains so we have no choice but to seek out a garage.  We’re thinking maybe it is that manifold leak problem after all.  Looked up & found 3 truck centers in Moab so we’ll call in the morning & see when we can get in & have someone find the root cause of what is causing our power loss.  Maybe it’s a Chevy dealer we should go to.  At this point we are just grasping at straws as to what to do.  We have a feeling this whole thing is going to cost us a huge pile of money.  Well at least we had a couple good days of felling good………………………….. 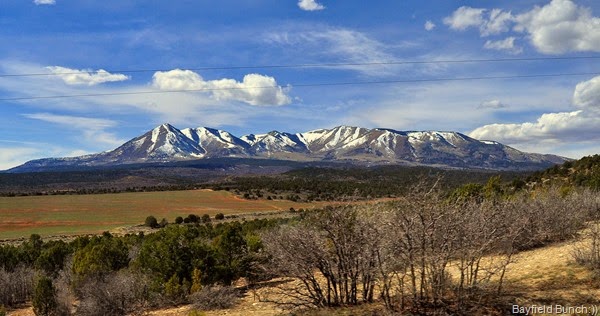 No need for me to tell you how we are feeling right now but the word discouraged would be putting it mildly.  By the way our fridge is still working fine………………….. 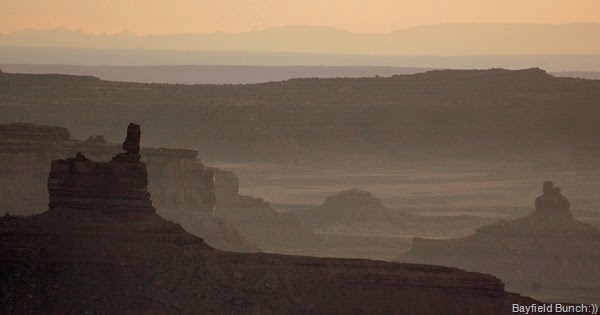 GROANER’S CORNER:(( A 3-year-old was diligently pounding away on her father's word processor. She told him she was writing a story.  "What's it about?", he asked.  "I don't know.", she replied, "I can't read."