MONTICELLO....DEFENSE AGAINST THE APACHE INDIANS 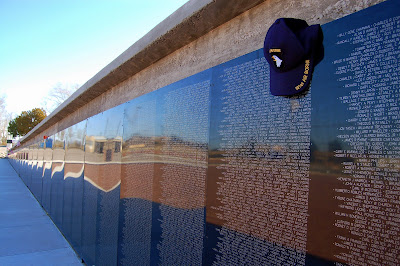 Our first stop this morning was Becky & Norm's to return their laptop computer which they had forgot last night. From there it was over to the southwest part of town to see T or C's Veteran's Memorial Park which is the home of the traveling Vietnam Memorial Wall. This is an impressive & well thought out project which is still ongoing. Be sure to see the photos. OUR PHOTO ALBUMS http://picasaweb.google.com/stargeezerguy/

Our second stop was to an exotic cactus greenhouse. Got talking to an American fellow who mentioned he was from the suburb of Gates in Rochester. Kelly's originally from Spencerport just outside of Rochester. The owner of the cactus store overheard the conversation, came over & said she was from Rochester too. Small world huh!! 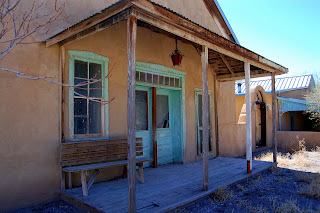 We had read & heard about a little town in a box canyon northwest of T or C called Monticello so we headed out across the desert in search of more history. http://www.geronimotrail.com/side_trip_7.html Once again a smooth paved road led all the way across the desert floor before dropping down into long narrow canyon & once again, we found a town at the end of the road. Monticello's buildings were built facing a town square because it was easier to defend against the Apache Indians who also lived & roamed the area back in the mid to late 1800's. The buildings are mostly adobe & wood, some with inhabitants & some without. A lot of the houses have been tastefully restored & others are in various states of disrepair. There is a large heavily constructed school in total ruins. I wondered if it had suffered a fire. OUR PHOTO ALBUMS http://picasaweb.google.com/stargeezerguy/ We spent nearly half an hour here & saw 1 person. The only sounds we heard were horses from some stables near by. I guess it's not fair to call these little places ghost towns but in a sense that's what they are. There are people living here but I think the ghosts of old pioneers are here as well. Maybe not everybody's cup of tea but it's sure a great way to see what's left of & what once was.....the true old American west. 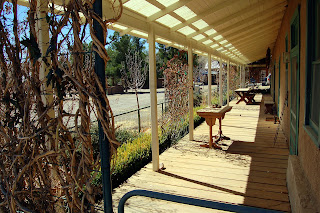 Upon leaving Monticello we had heard about a dirt road across the desert heading in the direction of Chloride so we found that & headed over that way. Once again, a totally serene drive over hill & dale without meeting another car. We were told there might be some water to fiord in a few spots but we found all the washes totally dry. This was also Indian country back in the 1800's & we could imagine the Apache Indian hunting parties riding hard over the ridges & gullies. When you read the history of this whole area there was a lot of fighting going on between the pioneer miners & the Apache Indians. You can feel the history all around you. The well maintained dirt road led us back onto the paved #52 road about 15 miles west of Cuchillo.

We were back in T or C by 2 o'clock in the afternoon & spent the rest of the day relaxing & reading. The sun's rays seem to be getting hotter every day so the brisk breeze was a welcome relief. We have pretty much decided to leave this area Monday morning & head on over to the other side of the White Sands missile range through Alamogordo to Roswell. Because I have an interest in Astronomy it's only normal that I have a likewise interest in the UFO phenomena as well, so in turn it's only natural that I pay a visit to Roswell, New Mexico. Commercialized or not, at least I might get to shake hands with some little green plastic Martians...............................D'ya think!!
Posted by Al Bossence at 3/01/2008