I SAT HERE TOO LONG TONIGHT TRYING TO THINK OF A POST TITLE…………….

Light rains in the night left us with a heavy morning cloud cover dropping drizzles of rain on us for the first half of the day.  50F at 6 a.m. was comparable to Borrego Springs at 52F & Yuma’s 56F but not so comparable with Bayfield’s 29F.  I’m so glad we are where we are:)) 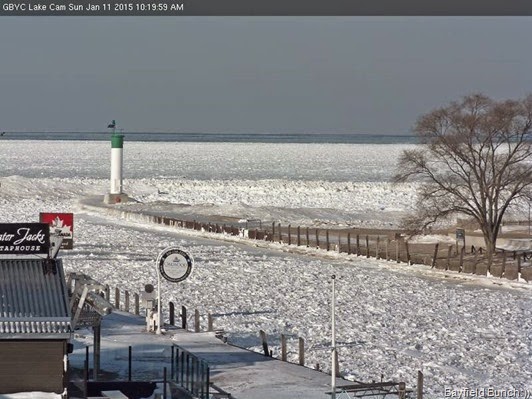 THIS IS WHAT IT LOOKED LIKE BACK HOME THIS MORNING IN GRAND BEND…RIVER’S FROZEN & LAKE HURON’S FROZE JUST ABOUT OUT AS FAR AS ONE CAN SEE…JUST A WEEK AGO THAT WAS ALL CLEAR WATER
My Son Sean’s group ‘The Weak Need’ just released their first music video entitled, ‘Holding Nothing Back’ & in the video that’s Sean on keyboards doing the vocals.  To optimize sound quality I suggest plugging your headphones into your computer. 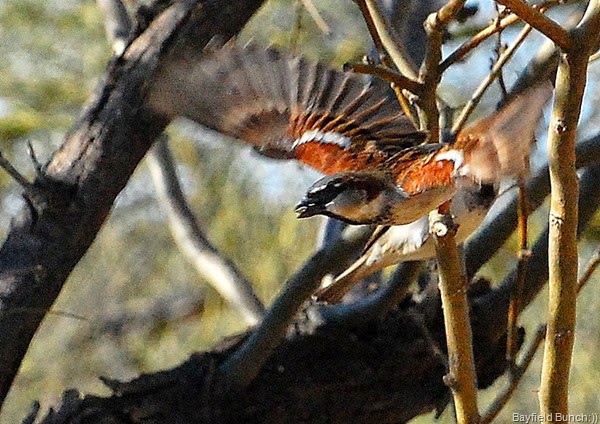 HEY, I’M KEEPING AN EYE ON YOU TWO OVER THERE
Afraid I have been a bit re-miss again in keeping up with our Blog Followers/Friend Connect list on my side bar so I have re-located it to a position where I can more readily keep an eye on it.  A big belated Bayfield Bunch welcome to, Jerry Criswell, Becky Tucker, Bill Richards from On Our Way, Patsy Irene, Ron Clanton, plus Jim & Diana Belisle from exploRVistas.  Thanks for dropping by folks & appreciate your interest:)). 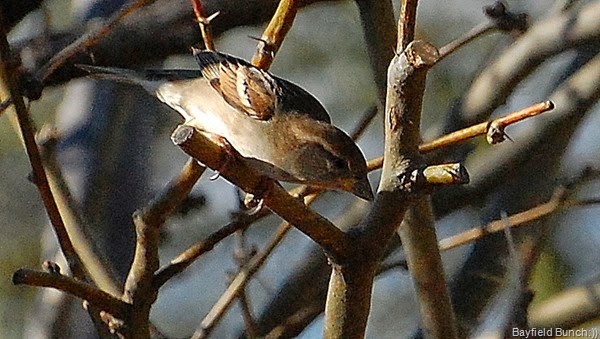 WATCHING THE BIRD FEEDER BELOW LIKE A HAWK
Came across a website/blog this morning that caught my attention simply because of it’s age oriented focus.  Time Goes By is hosted by Ronni Bennett with about half a dozen like minded contributors.  A lot of info on this site.  I like Peter Tibbles article entitled: ELDER MUSIC: Nudie Suits.  So that’s where all those bizarre clothes came from worn by musicians over the years.  From Hank Williams to Elvis, Roy Rogers to Jerry Garcia of the Grateful Dead.  Rhinestones, glitter, & glam. 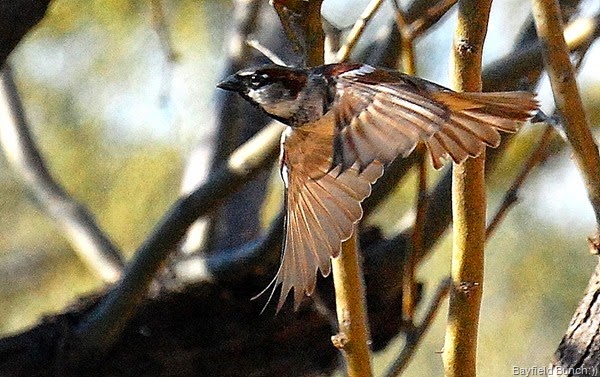 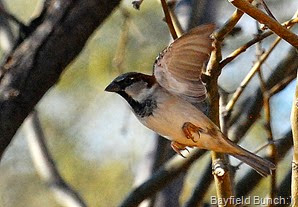 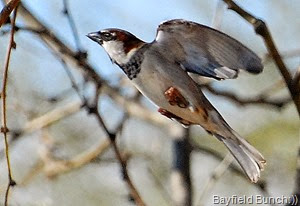 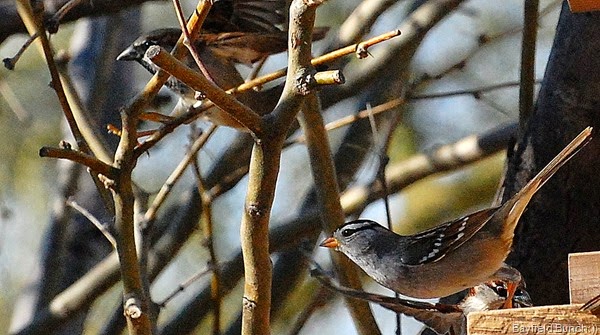 A SEED FROM THE OVERHEAD BIRD FEEDER CAN BE SEEN DROPPING PAST THIS GAMBLES QUAIL
Our crappy weather pretty much kept us inside for the first half of the day but I was able to vacuum the Motorhome & begin setting it up for my 6 day stay in it beginning next Sunday.  Kelly’s brother Peter & wife Leslie from Webster New York are due in a week from yesterday after first spending a couple days exploring around Las Vegas Nevada.  They will have my bedroom while Pheebs & I camp out in the rig.  Me & Rascal Pants like staying in the coach because it’s like having our own peaceful little world going on in there.  Do what we want & for us guys that works mighty swell every time.  Happy Campers:)) 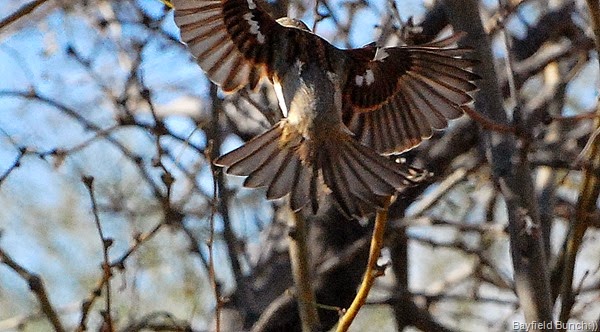 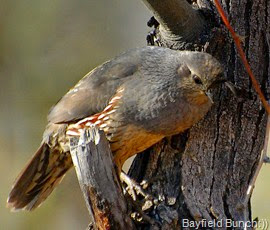 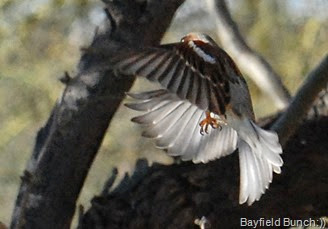 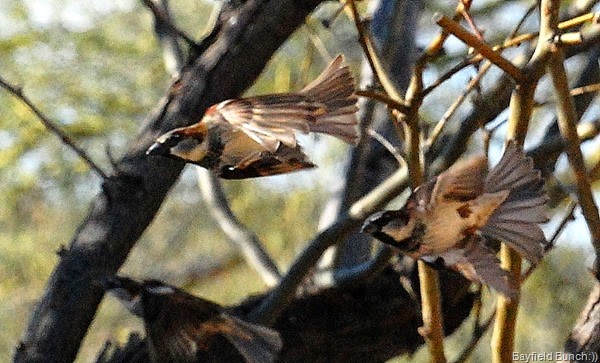 Steve over at Hounds RVs and Retirement Living is looking for some opinions & feedback on a tough question I’m sure many RV’ers including ourselves have faced while traveling with pets.  This question came up front & center for Kelly & I years ago when we had a little incident in a Mexican border town south of Lukeville Arizona.  We had left Max, Checkers, & Cora in our locked Motorhome one morning before driving about 15 miles into Mexico for a look around at some shops.  Had us a scary little happening there that on the way home later had us asking the question, ‘what if that situation had gone the other way & we had been detained in Mexico for any length of time!!    What would have happened to our 3 dogs. Not being in the habit of traveling with others or telling anyone where we were the situation could have had a bad ending all way around.  That Mexican border incident can be seen in my 2008 post entitled: Our Mexican Border Town Incident.  Steve, possibly a future solo traveler is basically asking the same question we did & it’s a very real & legitimate common sense question to ask.  And much better to have forward thinking questions like that rather than racing into something with little thought or preparation.  I’m sure most of us have done that ‘little thought or preparation’ thing in our lives (especially in our younger years) in more ways than one. We have sometimes luckily reaped the benefits of that thought process but quite often we may have suffered the consequences as well from that kind of thinking.   I know the saying, ‘nothing ventured, nothing gained’ but it’s only a saying & there are way too many illogical sayings out there belonging in old dusty books & not practical thinking people’s minds.  Again, common sense is the key here.  Anyway, I’m sure Steve would appreciate your thoughts, ideas, advice, & opinions…………………………….. 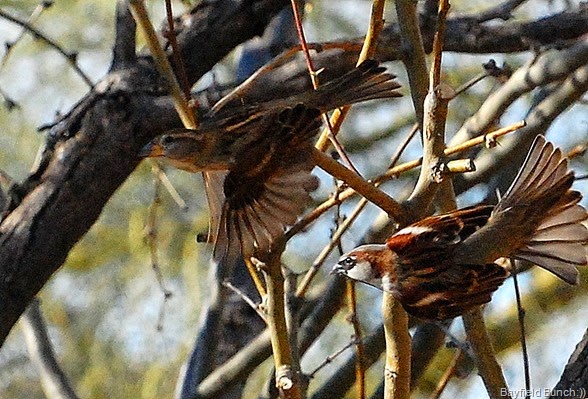 Mike from the dynamic duo of Janna & Mike popped over this afternoon to see about tightening up a loose screw on one of our Jeeps fog lights.  Unfortunately out of the 3 containers of tools Mike had with him Chrysler’s Jeep division obviously decided to use a screw that must have been manufactured on another Planet.  Think we’ll just take both fog light assemblies right off & bolt on a new set & be done with it.  Bolts are pretty rusty anyway.  Mike no sooner left when handyman Les showed up & completed a repair to our kitchen ceiling.  He’ll be back again to install our new kitchen faucets shortly as well. 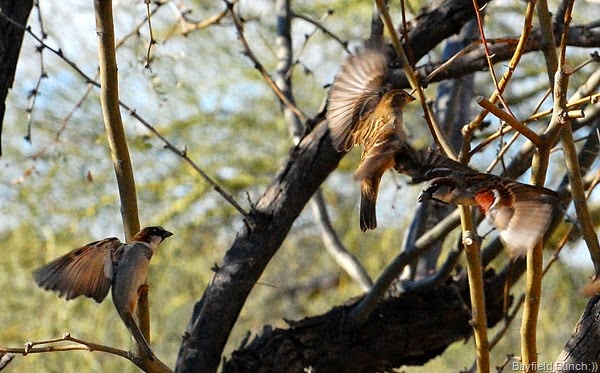 THREE FLYING BIRDS IN THIS PHOTO
Despite a cloudy, wet, & damp start to the day our heavy overcast began breaking up about early afternoon. How nice to feel those warming rays of Arizona sunshine streaming through ever widening holes in our overhead cloud cover.  Sunny days ahead:)) 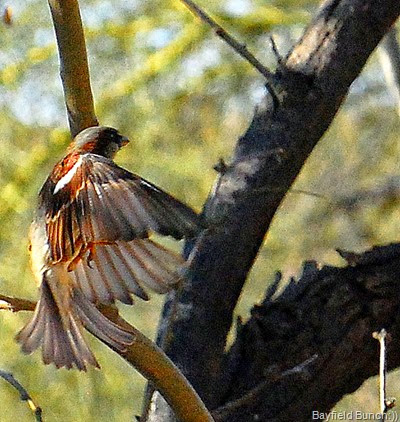