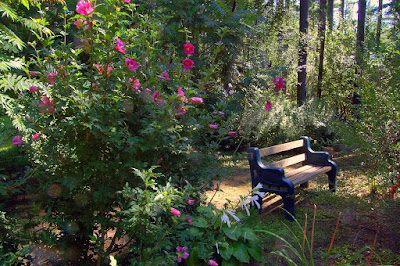 OUR NEIGHBOR BERT IS GONE NOW BUT HIS GARDEN BENCH REMAINS

Not only are the kids back to school here in Huron county but the summer holidays were over for our outdoor houseplants this morning as well. Temps have been dipping lower each night so it was time to bring the whole gang back inside for the coming winter months. The outside jungle look has now advanced into our sunroom. Yesterday I had a hummingbird fly in the open patio door but after some frantic fluttering around I was able to gently scoop him into my hand & ease him back out the patio door. 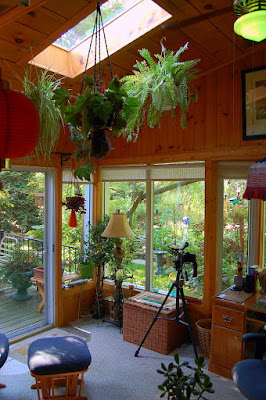 HOUSE PLANTS ARE NOW BACK INSIDE FOR ANOTHER SEASON

In February of 2008 we were staying a few days at the HICKIWAN TRAILS RV PARK in Why, Arizona. Kelly had noticed an advertisement for a craft/pottery type store in the little Mexican border town of Sonoyta just a half hours drive south of us near Lukeville. The year before while in New Mexico we crossed into Mexico at the border town of Palomas & really enjoyed our time spent in the well known Pink Store. Figured it would be nice to visit Mexico again & re-kindle some of those old Amigo oriented memories. It was not to be!! 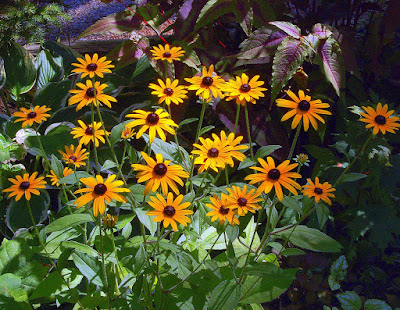 BROWN EYED SUSANS IN ONE OF OUR FLOWER GARDENS

Nice sunny morning for a drive so we headed south through Organ Pipe Cactus National Monument to the town of Lukeville & cruised right on through the old gates into Mexico with no problem. In Palomas we had parked the truck & walked across the border but here we just drove across. Mistake!! When entering Mexico the visible change is immediate, if not some what shocking. Much like a third world country you see on television. Within a matter of a few feet you enter another land with an entirely different lifestyle. You are immediately accosted by numbers of people trying to sell you everything from soup to nuts & in most cases the nuts are probably still in the soup!! The urban decay is evident everywhere with tumbledown buildings, old wrecked cars & trucks puffing & clanking around the rut goughed dirt streets. Very poor people asking for money. This is what you see as soon as you cross the border but if you continue into Mexico further things improve. I have been to Puerto Vallarta a couple times & it is far different than either Sonoyta or Palomas so it's probably not fair to judge Mexico by it's border towns. 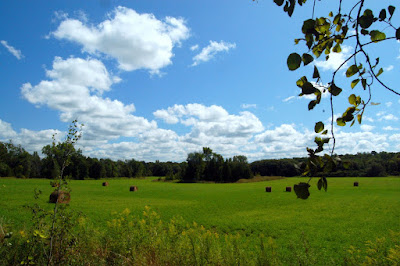 We drove for a little ways & then turned off the highway into the downtown section of Sonoyta. Had only driven maybe 2 minutes when we approached an intersection. I instinctively slowed down glancing ahead looking for a stop sign but there wasn't any. It was a divided road with a dirt median in between. No traffic approaching from either side but I was a bit confused at no stop sign for the other way either. Slowed down & entered the intersection just as I noticed some kind of sign on my left in the median. Wasn't red & didn't say STOP. Well, of course not.....I'm in a different country dummy!! Just as I cleared the intersection on the far side I saw a figure about a hundred yards ahead step off the median waving his arms in a gesture for me to pull over. Oh Oh!! 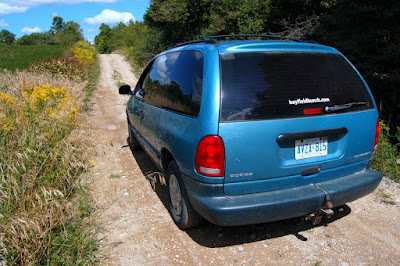 He had on what looked like some semblance of a uniform so my instinct to obey a uniform kicked in & I pulled over to the right hand curb. This man approached my open window & leaned right down in my face & began saying something in broken English about a stop sign. It was immediately clear to me that he was berating me for driving through a stop sign. Of course I stumbled out an apology & said I was confused by the signage. He went on a bit about the stop sign & I began to have some doubts whether he was a Mexican policeman or not or just somebody with green military cap & a deputy dawg badge. Then, in no uncertain terms he demanded I hand over my driver's license to him. Before I could even think about that, Kelly piped up with, "don't give him your driver's license. Talk about being between a rock & a hard place. The hard place on my left demanded my license again & the rock to my right shouted, "don't give him your driver's license!!!!" 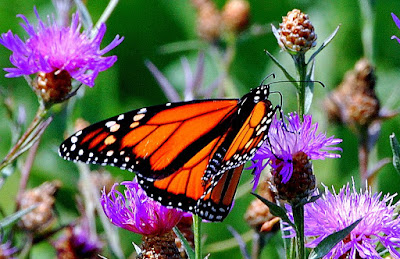 The situation was rapidly heating up & I still had my left foot on the clutch with the car in gear so I eased up on the clutch a bit & the car moved ahead a few inches. With that the fellow shouted at me, stepped back & opened his jacket pulling out a two way radio. It was at this point I saw the gun belt......but no gun. I quickly tapped the brake & thankfully he didn't holler into the radio for assistance. He approached the window again & this time Kelly took a different tact. She said quite sharply, "how do we know you are a policeman, show us your identification!!" I sensed a turning point in the negotiations at this point because the fellow hesitated for a few seconds, seemed confused, & then reached into his back pocket pulling out his wallet. He shoved the wallet in front of my face saying something about identification but all the cards displayed there looked Greek to me. The rock on my right now said to the hard place on my left, "do you want $20??" Is this what this is all about!!" He didn't seem to react to that but he did react to something a few second's later that we have never been able to figure out. 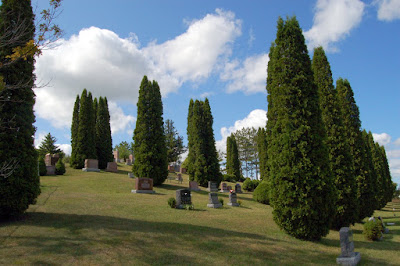 More words passed between all three of us for what seemed an eternity & then all of a sudden he quickly stood straight up peering over the roof of the car, took a step back & began waving his harm in a forward motion saying, "Go, go, go.....so I popped the clutch & we went, went, went!!!! Down the street & around the corner I went with only one thought in mind, get back across the border as fast as I can....but, oh no, that was not to be. I not only had a rock in the passenger seat but I had a dedicated shopper sitting there as well & no silly little incident like we just had was going to stop her from going to that pottery store. No sireeeee!! No Mexican policeman, no two way radio, gunbelt or deputy dawg badge was going to get in her way. Fortunately the street I had turned onto was the one with the pottery store so very reluctantly I pulled into the parking lot. Kelly got out & went into the store but I never budged from the locked car. Had visions of the car being stolen if I left it. I was suspicious of everything & everybody at this point. I was approached about 4 times by vendors trying to sell me something but I just waved them off. Figured any second I would hear the sound of gunfire & see the bullet holes appearing my windshield. 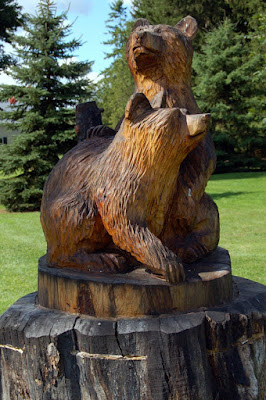 ANOTHER LOOK AT THE BEARS CARVED OUT OF AN OLD TREE

Kelly casually strolled out of the store about 15 minutes later & we hightailed it for the border with my eyes glued to the rear view mirror expecting at any second to a see gaggle of old dented & dusty Mexican police cars in hot pursuit with huge sombreros sticking out the windows & big blustery mustached men with guns blazing away at us. Kelly was probably thinking about the pottery prices. 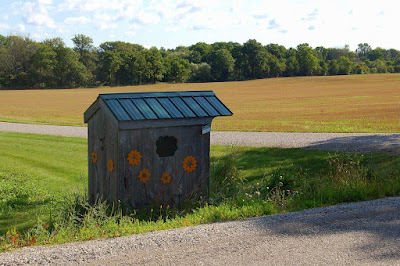 KIDS SCHOOL BUS SHELTER AT THE END OF A FARM LANE

A couple quick questions by the American border guard & we were across the line out of Mexico & back into the good old U. S. of A. Back into the civilized part of the North American continent. I can't even begin to tell you the sense of relief I felt inside to be back on safe ground. Told myself right there & then I will never drive into Mexico again.....ever. Kelly was probably thinking, hmmmmm, I wonder if that pottery store will have a sale on next week. I don't mean to downplay all of Mexico though. It was just an incident that happened to us in a border town that was very unfortunate but had the potential to turn into a very serious situation. Sure did a lot of thinking on the drive back to our RV Park. What if we had been detained there!! We had 3 dogs in our motorhome back at Hickiwan trails & what would have happened to them. A very scary thought for us & it just pointed out how careless we had been in our thinking. 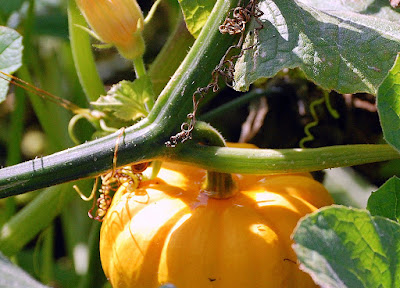 PUMPKINS & SQUASHES ARE HEAVY ON THE VINES

To this very day we do not know what really happened that morning in Sonoyta. Was that a real police officer or just the usual street level scam artist with a green hat, jacket, & pants, trying to make a fast buck on unsuspecting tourists. I figure a lot of folks cruise through that confusing intersection & people just wait down the street to scam them with the police story. Someone suggested he may have been Mexican Para-military....whatever they are. Why all of a sudden did he step back, wave his arm & tell us to go. Did he see the real police approaching?? Don't know & don't figure we'll ever know but it did sour us about visiting Mexico again that's for sure. 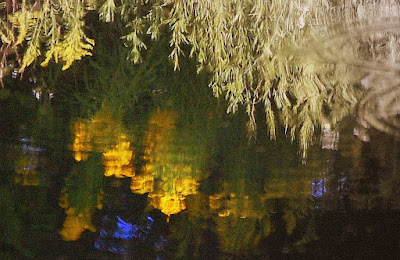 REFLECTIONS IN A POND

I never did blog about this incident because we had relatives at home following our blog at the time & I didn't want to alarm anyone or bring down the axe of criticism on us about going into Mexico in the first place. Aside from telling a few friends we just kept it low key. Can't remember if I ever made reference to it or not in previous blogs but if not then the Chile pepper is now out of the pouch......so to speak. 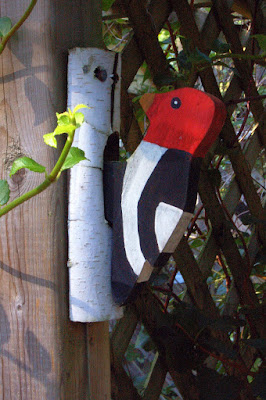 RED HEADED WOODPECKER FOR SURE:))

Have had a flurry of emails & comments on yesterday's blog so it's nice to know folks are reading not just my blog but other's as well. I was made aware indirectly by another blogger friend of another fellow blogger who was tossing around the idea of packing up his blog & riding off into the sunset with it so I saddled up & rode over to his site, had me a look see, liked what I saw, & think you might too so here's MIKE & PAT'S TRAVELS blogger site. Head on over, put a burr under Mike's saddle & encourage him to, "git er done!! 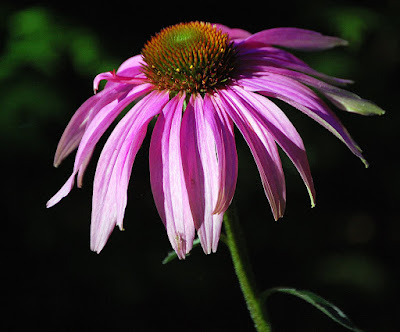 Also in last night's blog I made reference to hanging out 'dirty laundry' on the blog site. Dirty was not a good word choice on my part so I would just like to re-phrase that to saying 'airing our laundry on the internet. There, now I feel much better. My socks feel better, my shirts feel better, & my shorts feel better too.....................:))

GROANER'S CORNER:(( Money isn't everything but it sure keeps the kids in touch.