SAD TO SEE OUR GOOD FRIENDS LEAVE THIS MORNING 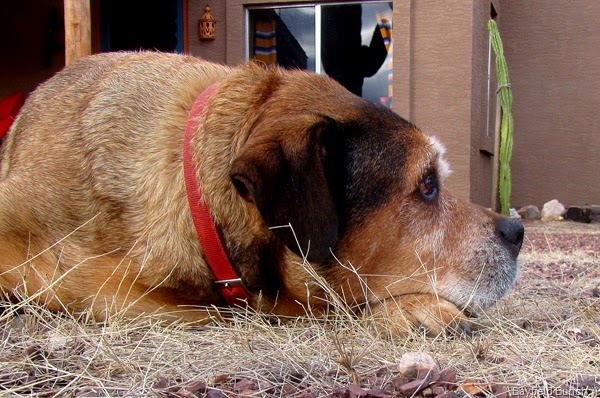 As well as Jean & Skip we are early risers so we were all outside saying our good-byes somewhere around 8 o’clock this morning.  As it is with friends we still had lots to talk about so all the doggy guys also had lots of time to race around playing & saying their own good-byes.  We had hoped they could have stayed a few more days but maybe next time. 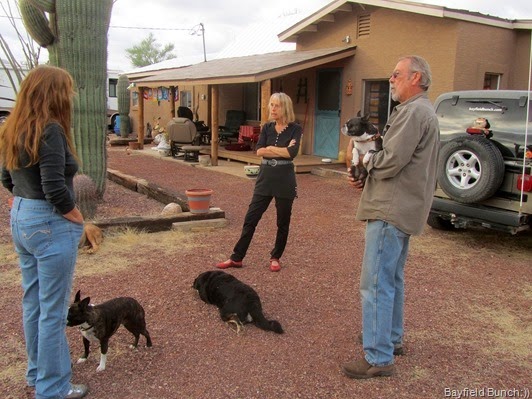 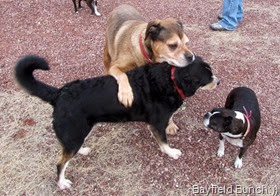 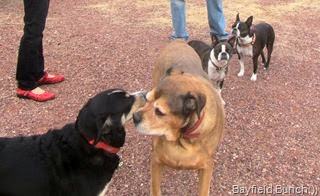 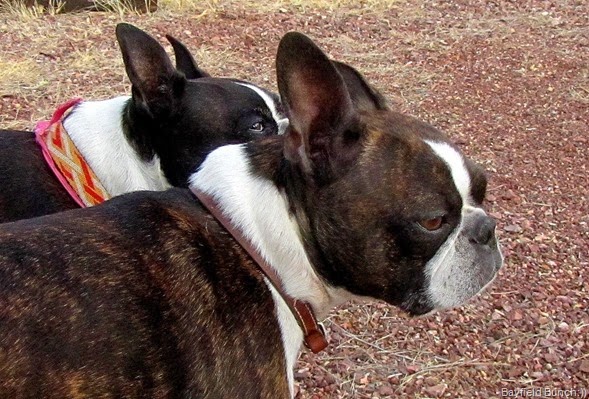 AW MOM & DAD WISHED WE DIDN’T HAVE TO GO 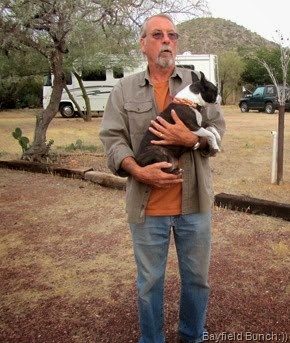 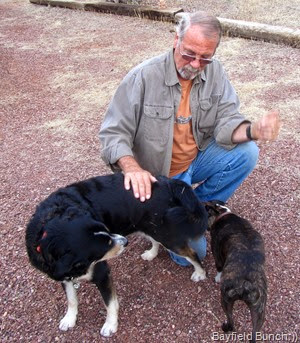 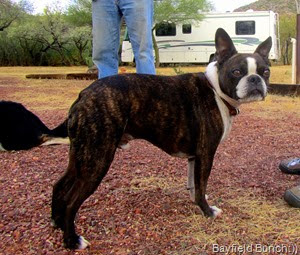 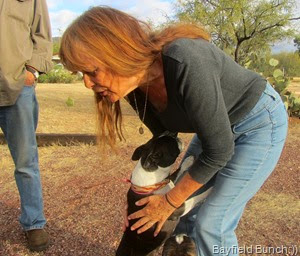 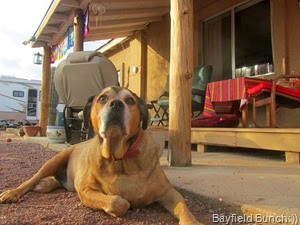 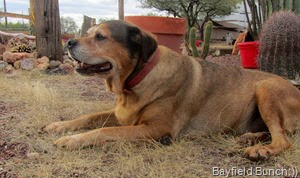 UM, WOULD IT BE OK IF I STAYED A COUPLE EXTRA DAYS

We were sad to see Sophie, Louie, big Jake, Jean & Skip leave this morning.  We always so much enjoy their company & doing things with them.  They are two people we feel very comfortable with.  Big Jake, Louie & Sophie left a nice new toy for Pheebs & she’s been racing around with it all day.  Thanks guys:))  It was 8:45 a.m. when the Vancouver Island gang rolled out our south gate heading off in the direction of that big Yuma town. 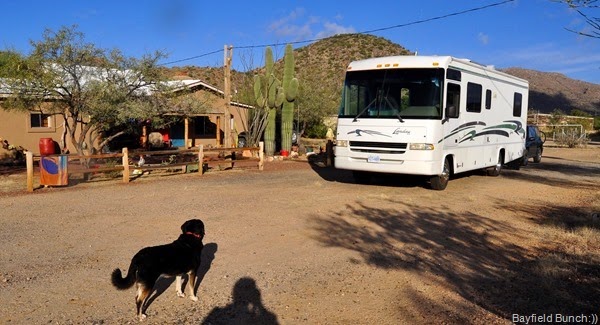 PHEEBS SADLY WATCHES AS HER PALS SOPHIE, LOUIE, & JAKE ROLL OUT THIS MORNING 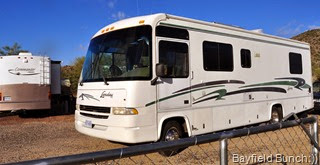 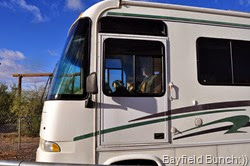 Fifteen minutes later Kelly & I were in the Jeep heading for Wickenburg.  It was time for some groceries & seeing’s how I was needing a Safeway fix I decided to go along on the grocery run as well.  Nothing too much new there as I skittered around the aisles rounding up my own stuff.  Kelly generally spends about a day & half in the meat department alone so I tried to throttle back my skittering.  We were home again by 11 $214.00 poorer but we did have a 21 pound frozen Turkey with us. 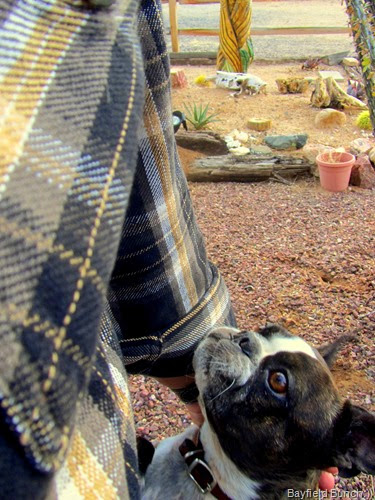 Turned out to be a very laid back day.  Had ourselves a high cloud cover & temps were comfortably cool.  Solar Mike emailed today saying he can have a look at our inverter problem first thing Tuesday morning.  We will roll out of here Monday morning & spend the night at the Slabs in order to be at Mike’s soon as he opens the following morning.  Tuesday will be November 18th which is nearly one year ago to the very day we were last at Solar Mikes to have a solar system installed on our 2012 Class C Winnebago.  That day was November 19th. SOLAR INSTALLATION 2013  And here is our original 2003 Damon Challenger Class A solar installation back on DECEMBER 20TH 2007 at Solar Mike’s as well.  Last November I remember when the rig was done & we were on our way out of Slab City thinking, “well, this is probably the last time we will ever be at the Slabs”.  Ya right, here we go again.  I think this will be our 4th trip to the Slabs since late 2007.  Guess you could almost call us part time Slabbers now…………. 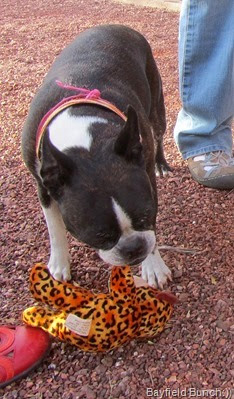 For you techie types out here & especially you Mac folks you might want to have a look at Steve’s latest post entitled, ‘A BITTER SWEET GEEK SQUAD COMPUTER REPAIR.’  Here is an exercise in complete frustration control.   Under the conditions Steve did a great job writing this post & even managed to infuse some fine humor in what could have otherwise been a very scathing rant.  Well done……………… 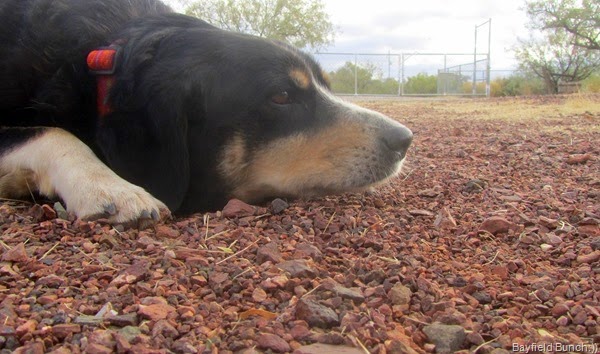 GROANER’S CORNER:(( A man had just arrived home after the successful implantation of a pacemaker.
Reading through the literature, he was delighted to learn that the instrument carried a lifetime guarantee.

A husband and wife were at a party chatting with some friends when the subject of marriage counseling came up. "Oh, we'll never need that. My husband and I have a great relationship," the wife explained. "He was a communications major in college and I majored in theater arts.  He communicates real well and I just act like I'm listening."