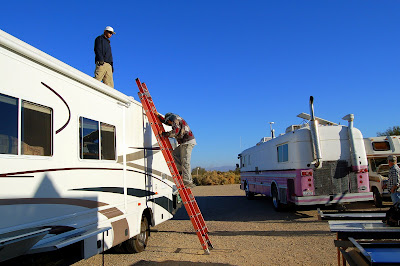 WEDNESDAY DEC. 19/07
Our body clocks still have not adjusted to the California time zone so we were awake waaaaay to early this morning again. Packed up the motorhome, took down the satellite dish & drove the short quarter mile over to Solar Mike's Sun Works for 8 a.m.

Mike & his 2 workers didn't waste any time getting started & it wasn't long & the two solar panels were on their way up onto the roof. As the day progressed it became clear that this is a very involved procedure. The 2 aging coach batteries had to come out & 4 new ones went in. No easy task considering the coach was only designed for 2. Modifications had to be made & it was clear the fellows new exactly what they were doing. Solar panels have to communicate with batteries & batteries have to communicate with an inverter & the inverter communicates with a couple of wall monitors in the coach so there is a lot of wiring involved. Not a simple undertaking considering the small spaces of a motorhome. Panel monitors have to be mounted, switches & fuses have to be changed, etc, etc. The two young fellows worked non stop while Mike helped out & supervised the more technical aspects of it all. Two 5th wheels rolled in to book solar installation appointments. Sun Works is a very busy place.
All the while this is going on there is a constant ebb & flow of colorful characters http://picasaweb.google.com/stargeezerguy coming & going at the Sun Works. Mike's place seems to be the hub of all that is well & good about Slab City. People are dropping in needing parts for this & that. Some are seeking advice for various things & one fellow was looking for a welder. Another guy dropped off a whole case of lettuce which Mike in turn handed out to everyone else dropping by. Solar Mike is an easy going laid back sort of fellow who takes everything in stride & it's obvious he is well respected by the Slab's residents. He's been here since 1986 & has been doing countless solar installations ever since. We found his name over & over on the RV forums from people who have had him do their solar work over the years.
If you come here expecting to find a big Sun Works neon sign out front of his business & a big brick building with 2 or 3 bays plus a fancy schmancy waiting room with a staff or people manning an overstocked parts department, you are in for a HUGE surprise. I think Mike's business is the classic example of, Keep It Simple!! A couple of ancient buses (early 70's), some tired old lawn chairs, a palm frond lean-to & an assortment of bits & pieces, some storage bins, & a whole lot of solar panels & batteries make Mikes business & home kind of a cozy little place with a creative little cactus garden, solar oven, colorful flowers, & an ambience found only here California's Slab City desert. The new & the old live & work comfortably side by side. Mike's old office bus may date back to the 70's but the modern computer, satellite internet & other new age technologies are all right up there in to-day's fast paced world. Remember, there is no electricity here in the desert & all this is driven by a combination of solar panels, batteries, & inverters. And sun of course!! Quite a clever & resourceful fellow.

The town of Brawley, California is about a half hour drive south of Slab City so we decided to take the car & motor on down there for some groceries in the early afternoon while the fellows were working on the coach. Brawley was a surprise for us because we had expected another tired & dusty little tumble down western town. Tall palm trees lined the streets, lush green manicured grass adorned well landscaped & expensive homes. Land was cleared for a new super center Wal-Mart & we even saw a McDonalds. Nice looking town.

We were back to Slab City about 4 & the crew was still working on the installation. The sun was setting before they finally finished & started up the system..........and found a problem!! Seems the used inverter may not be functioning correctively so Mike said he would trouble shoot the problem in the morning & determine what is not working. That was fine with us because we're in no hurry to be anywhere.
Our water tank was nearly empty so we drove the short distance into Niland & filled up the tank from a water faucet behind a gas station. Back to the Slabs & parked near Mike's place for the night. Nice out with a big three quarter moon & mild temperatures. Lights twinkling on the horizon must be the town of Brawley. Thanks for the big juicy hamburgers to-day Brawleytown:))