PRODUCTIVE MORNING & A FEW THOUGHTS ABOUT OUR RECENT TRIP TO CONGRESS AZ. 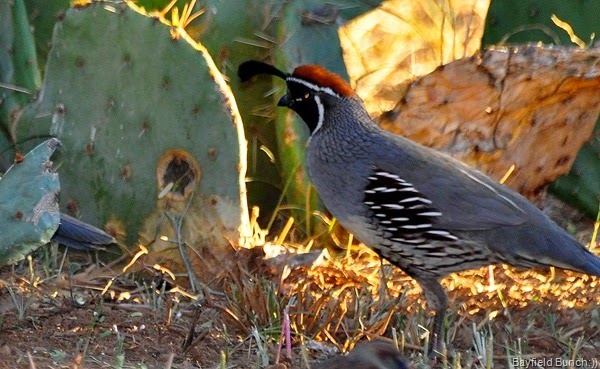 Awake early I sat quietly in my Ikea chair beside my bed.  Cool air gently fluffing my open bedroom window curtain.  Soft music on my Satellite radio.  Pheebs asleep on my bed.  It was mornings pre-dawn hours as I reflected back on our trip from Bayfield Ontario to Congress Arizona just a few weeks ago.  A long tedious journey & a route we are likely not to travel again. 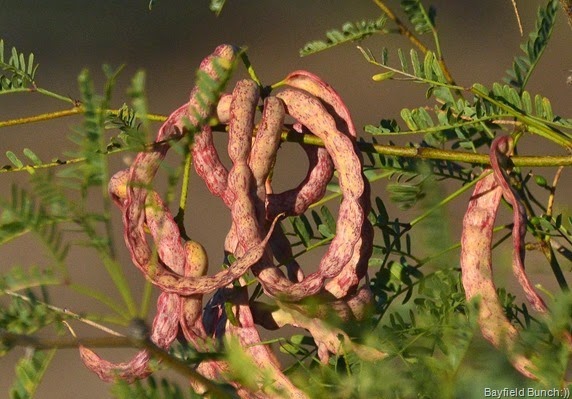 Thinking back there were definitely some good parts.  We did not have to go through or around any large cities & we traveled very few Interstates.  Our best day was our first day & that mainly had to do with the fine Autumn weather we had as we made the drive from Bayfield to Tobermory Ontario.  Enjoyed the CHI-CHEEMAUN experience despite the cold foggy morning.  Our long drive from rainy cold Manitoulin Island way up over the top of Lake Superior was marred by bad weather most of the way.  We found this very tiring & disappointing.  We had hopped for sunny weather highlighting Autumn’s beautiful array of colors in a drive second to none.  I did enjoy touching base with a few old memories in Oxdrift Ontario. 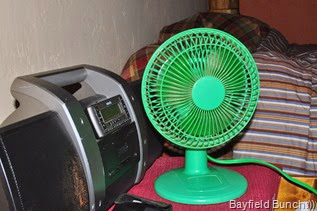 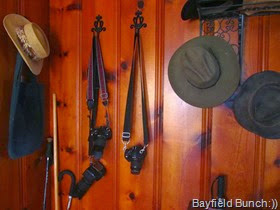 Cold Manitoba winds made our week-end stay in Winkler Manitoba not memorable.  Highlight of our stay there was the Triple E plant tour & meeting a couple blog readers.  We were relieved to find out our water problem first encountered in Wawa Ontario was not serious & had nothing to do with the coach & everything to do with us over-filling it.  Leaving Winkler it was the constant & seemingly endless Prairie winds that wore us down over the next few days.  Nice meeting a couple more long time blog readers in Brandon Manitoba.  We pushed on West knowing the sooner we reached our second destination in Rouleau Saskatchewan the sooner we could point the rig’s nose South out of the battering North-Westerly winds. 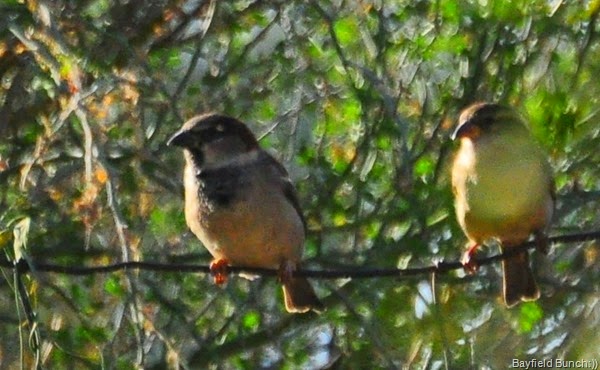 Corner Gas was of course a disappoint for me on a cold sullen & very flat southern Saskatchewan morning.  I had told myself not to expect anything but I sometimes have a hard time listening to myself.  And then we discovered the damage to the Jeep.  High point of the day was our no problem border crossing at Regway.  Low point of the trip was Williston North Dakota when we found out we had some kind of power problem in the coach.  Engine battery was dead & the water pump wouldn’t work meaning no hot water.  And then there was the nightmare drive in heavy predawn traffic through what seemed a never ending construction zone. 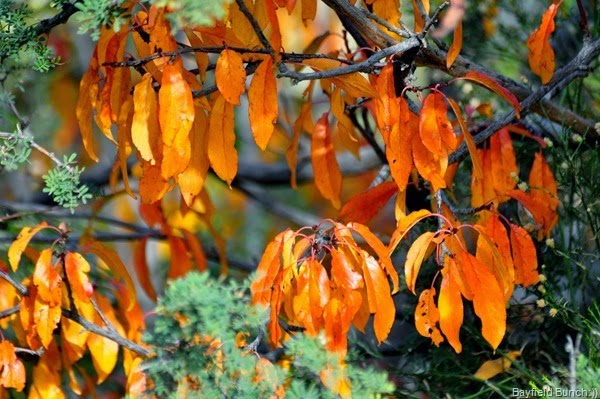 It was a another low point in our travels when an RV garage in Sturgis South Dakota told us our inverter was fried & it would cost $2600 plus labor to fix it.  High point of Sturgis was sunny weather combined with a quiet & picturesque RV Park for a couple days.  Mount Rushmore was a nice break for us.  Our second best day occurred on our drive from Sturgis South Dakota to Rawlins Wyoming.  Sunny skies, great scenery & lite winds all the way.  But our original plans were already in the dumpster as health problems had set in to change our main original destination for the whole trip which had been Capital Reef Utah. 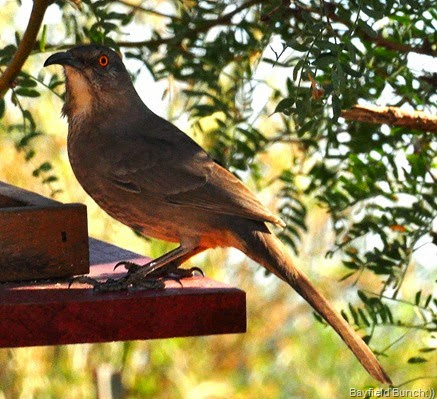 Kelly had picked up a cold which worsened.  Tiredness & fatigue had set in for both of us.  Stress over the coach problems brought on the decision back in Sturgis to simply head straight away for our house in Congress.  We needed time to recuperate & re-access our situation.  Hate to think we are not as young as we used to be.  We may return to the Custer area next Fall. 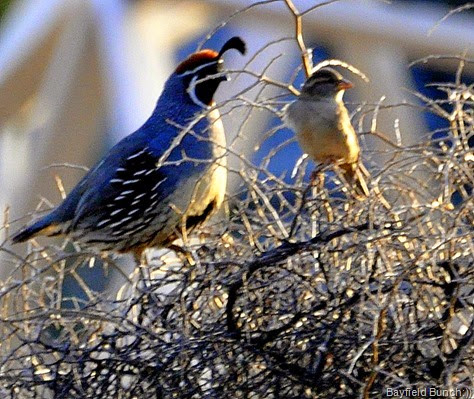 With the exception of the inverter problem we are both pleased at how well the Big EEE performed.  Never once did our bottoms get tired in the comfy Captains chairs.  The rig is easy to handle & we were able to maneuver ourselves around OK in a few relatively small spots.  So nice to have ‘space’ to get up & walk around & how nice to have a dining room table & chairs again.  And a comfy couch bed for me & the Pheebs.  Two solid thumbs up for our 11 year old Triple E Commander coach. 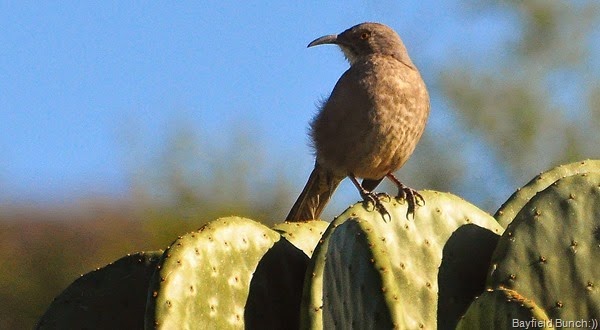 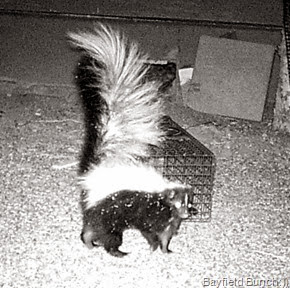 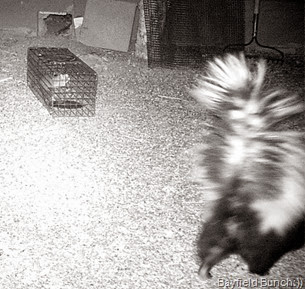 We avoided the yelping dogs this morning by Jeeping ourselves to a different gate down the road & driving out into the desert for about half a mile.  We had a passenger to drop off.  I don’t have the heart to kill anything so we drove little Packy the Pack Rat out to a spot where we saw a pile of brambly brush.  Pack Rat’s love these kind of habitats.  Carried the cage over, opened the door, & off he went with nary a look back.  I wished him well. 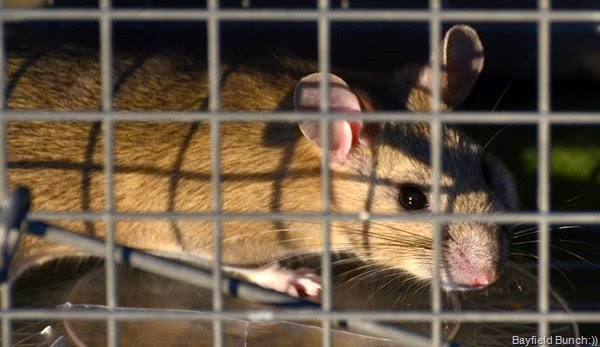 Took ourselves for a wee walk & I said to Kelly, “this is the first morning I have felt like I almost have my Arizona head back on straight”.  Although we are both glad to be here it has taken us a full week to get over our journey this year.  First time that has ever happened. 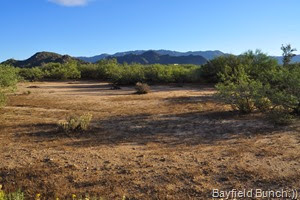 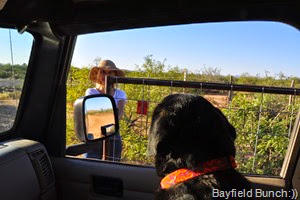 THIS DESERT GROUND IS ALL HARD PACKED & MAKES FOR EASY WALKING, BICYCLING, OR DRIVING & HOW NICE TO HAVE SUCH A PRETTY GATE OPENER THIS MORNING

Sharp at 8 o’clock I had the Jeep at the B&B Congress garage.  Less than half an hour later I rolled out of there with 2 brand spanking new Jeep headlights.  Lights & installation were only $30.  Tuesday morning a fellow arrives to put a new windshield in the Jeep. 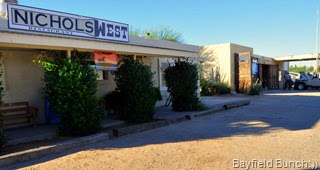 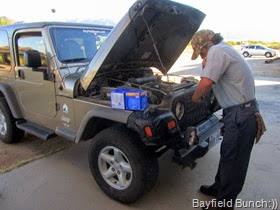 THE B&B CONGRESS GARAGE CAN BE SEEN RIGHT BESIDE THIS WELL KNOWN 4 STAR EATERY CALLED NICHOL’S WEST…DESPITE BEING ON A CELL PHONE IT DIDN’T TAKE DAVE LONG TO GET THE LIGHTS IN & WHILE TAKING THIS PHOTO IN FRONT OF NICHOLS ONE OF MY ALL TIME FAVORITE FEELING GOOD TUNES CAME ROLLING OUT OF AN OUTSIDE SPEAKER…JOE JACKSON’S ‘STEPPIN OUT’:))

After a totally lethargic Sunday I was on a roll this morning.  Soon as I got the Jeep home I took off the front protective bra for the first time in over 4 years.  Washed the Jeep’s front end plus the bra of all the accumulated dust, dirt, & gravel & put it back on again.  It was this black bra that protected the front end of our Jeep as well as the radiator a couple weeks ago when all our lights were smashed & windshield cracked.  Finishing that I scooted back up onto our house roof & painted a piece of roofing that was needing some paint.  Also finished trimming Palo Verde branches which were hanging down making contact with our roof.  Re-located our Wilson Sleek antennae as well.  Also finished cleaning & re-organizing our garden shed despite the sun heating it’s metal sides up like an oven.  Hey, maybe we’re finally becoming acclimatized.  All & all a productive morning all way round.  We’re gradually getting back on our feet as Kelly’s cold lessens & our overall tiredness lifts.  I like when that happens. 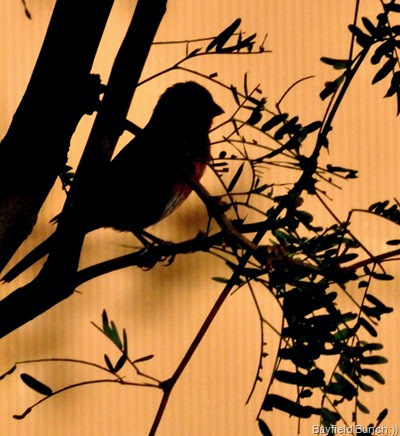 Fulltime RV’ers Bev & Jim dropped in this afternoon.  They just made it down from Oregon via California & are currently at North Ranch.  Readers will remember them from our Jeep rumbles in the desert the past couple years.  Jim, a former Helicopter mechanic was interested in the electrical & inverter problems we have been having.  He did a lot of wire testing with his voltage meter & did find one loose nut on a ground fixture.  His suggestion to us is to first have a load test done on the 4 coach batteries which are all hooked up in unison.  He suspects one of the batteries could be causing a problem.  We will take it down to the B&B Congress garage & have those batteries load tested this week. 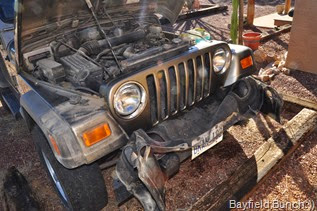 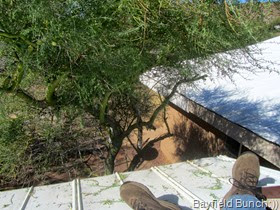 For 35 years now October 19th has marked a special day for me & for the last few years I have included this LINK to why that is. I wrote this post in 2011 so as you read it you will notice some of the numbers have changed.  Had meant to include this with Sunday’s post but you know how these aging memories work………………. 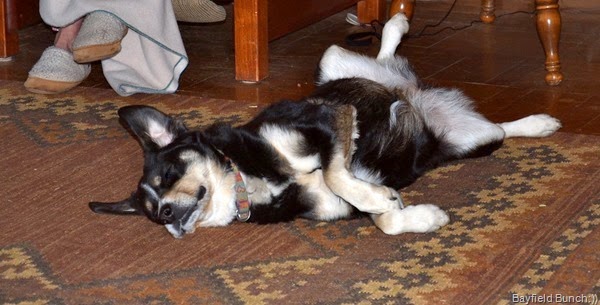 GROANER’S CORNER:(( Old Sam Johnson goes to his doctor complaining of aches and pains all over his body. After a thorough examination, the doctor gives him a clean bill of health.  "Sam, you're in excellent shape for an 85 year old man. But I'm not a magician - I can't make you any younger," says the doctor.  "Who asked you to make me younger?" says Sam. "You just make sure I keep getting older!"