THIS PRETTY MUCH SUMS UP THE SCENERY ON OUR WHOLE DRIVE TODAY
With the morning Sun full in our eyes at the start of another travel day we headed East out of La Junta Colorado about 7 a.m.  Landscape this side of the mountains is about as flat as a floppy pancake.  Grasslands from horizon to distant horizon & yet it is beautiful in it’s own way.  Especially in the early morning light.

SNAGGED A FEW WINDMILLS FOR YA TODAY MIKE 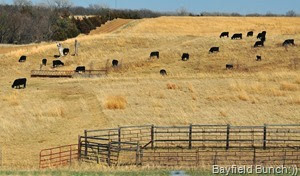 Spent a big part of the morning following secondary roads ambling our way North-East through the grassy Plains.  Highway 50 out of La Junta to 287 & headed North.  A left & right deak up to Kit Carson & hung a right onto highway 40.  This took us all the way to Oakley Kansas whereupon we hopped onto I-70.  But I’m getting ahead of myself again.

NOTICE THE ‘WAVY’ HIGHWAY
I love when I can look up & down a road & not see another single vehicle.   That is what made this morning’s drive so relaxingly enjoyable.  But there is a traffic menace on these long straight stretches of paved back roads & they move very fast & are very big.  The menace comes in the form of 18 wheelers hauling livestock, feed, & grain etc.  These guys are doing about 350 mph .  You first see them coming up from behind about a mile away.  Re-check behind again in 10 seconds & you have a mirror full of very angry looking truck grill!!  No point trying to outrun them, just grip the steering wheel tightly while they thunder right over top of you.  We got big truck tire marks all over our rig now. 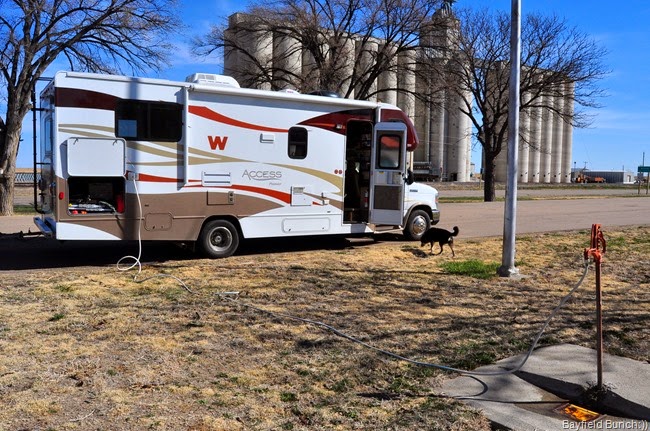 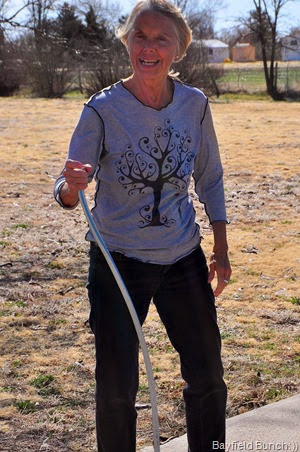 <<< A BONUS FIND WHEN WE ROLLED INTO A REST AREA IN WESKAN KANSAS…FREE WATER TO TOP UP OUR FRESH WATER TANK
Rolling into Oakley I reminded Kelly this was our last relatively peaceful country drive (except for the trucks) on a two lane highway until we turned off the 402 south of Forrest Ontario Canada.  From here on in it was Interstates the rest of the way.  Very lite traffic on I-70 today.  I don’t mind Interstates when not many vehicles are on them. They serve a purpose in directly moving one from one place to another in the shortest possible time.  I’ve always felt Interstates in the West have far less traffic on them than Interstates in the East.

Temperatures by 10 this morning were 72F & by afternoon we were in the 80’s with a mild wind.  Just a beautiful weather day.  Had my driver’s window open challenging that big warm Kansas wind to just come on in & try to blow my hat off.  It did.

We remembered a nice quiet & free RV Park we had stayed at on our way down last October.  It was about 45 minutes north of Salina Kansas on highway 81 in a little place called Concordia.  Located directly across from a Wal-Mart at Concordia’s south end I call this place ‘Army Tank Park.’  Has an Army Tank & a Howitzer Gun Carrier on display as you pull in.  Actually this is a functioning Air Park with runways, hangars, & small planes.  Free water & electric with 12 level cement slab sites with 8 of them pull-throughs.  Lots of grass & trees for shade.  Safe & great for pets & people alike to get out & do a little walking around.  There are 6 of us here for the night.  For additional photos, information, & the proper name of this Park just check out my link for our last time here in October… ARMY NATIONAL GUARD 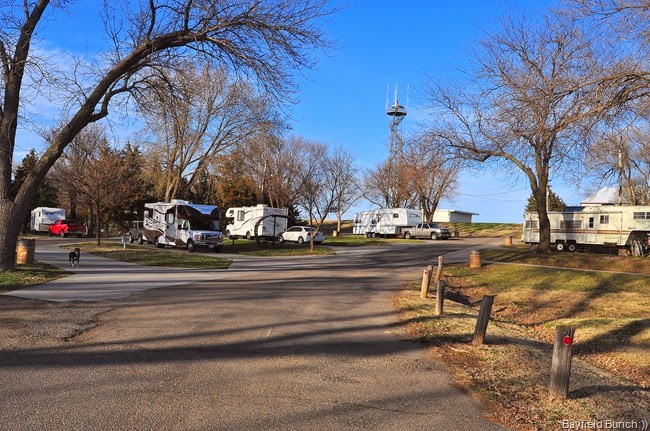 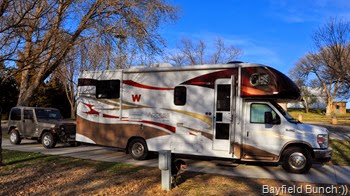 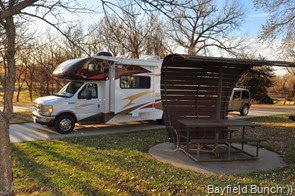 AND THIS IS WHY I CALL IT ‘ARMY TANK PARK’
Again, no hard & fast destination tomorrow.  We’ll just drive for as long as we can.  As I have said before, we don’t doddle along through this part of the country because this is Tornado season & with the really hot & humid air here right now storms can develop very rapidly.  And it looks like a cold front headed this way could be here by the week-end.  Could be trouble so we will be making tracks.  MapQuest said we logged about 450 miles today.  Oh, & saw my first Dandelion & Robin too right outside our door where we are parked for the night.  As I am typing this Robins are singing in the trees outside.  Now how nice is that.  Noticed farmers on the land today as well.  And if it doesn’t cool off tonight we are going to have trouble sleeping.  There is some dat busted humidity in the air!!  Just realized we have gone through our second time zone change as well.

Again, very impressed with how well our rig is running.  Our fleet footed & agile Chevy Sunseeker last year had really spoiled me but I’ve kinda come around on the Ford V-10 engine now.  Not as much torque as the Chevy engine but it just gets out there & wants to go.  Biggest problem I am having is holding the speed down.  If I don’t lock it into cruise control I’m up to 70-75 mph before I even realize it.  Not so good for gas mileage.  Some folks have asked me how many miles to the gallon our 26’ Class C Ford gets but I have no idea.  I’ve never been one to pay attention to that.  Some things are just better left unknown to me.

LOTS OF SPRING CALVES IN KANSAS THIS YEAR
Looks like we got ourselves out of Congress Az just in the nick of time.  With temperatures there now in the high 80’s & low 90’s I would have been grumbling like nuts about the heat already.