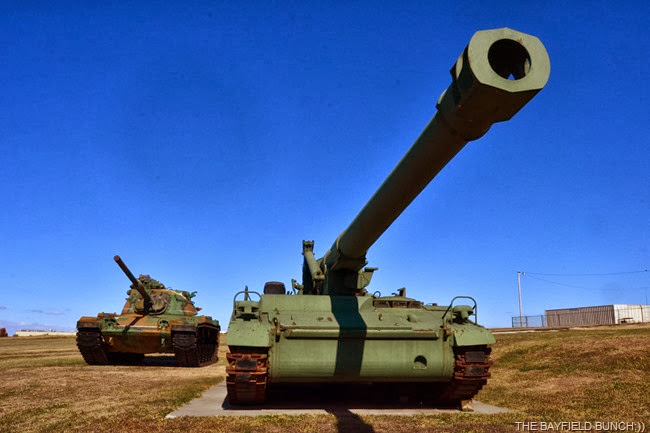 By the time old Sol lumbered up over the eastern horizon & lit up our tail feathers this morning the Bayfield Bunch was already making fast tracks westward out of Omaha Nebraska.  It was a week day & we knew all the locals In Des Moines would be fast tracking it for work so in order to beat the morning rush we Ontario hay seeds hauled ourselves out of town by 5 a.m.  We were long gone before the chaotic rush started.  But we forgot about the Omaha rush.  Took the 680 bypass north around the city & aside from bouncing off some heavy maniacal traffic for about 10 minutes in Omaha’s northwest end we made out alright & nobody got hurt. 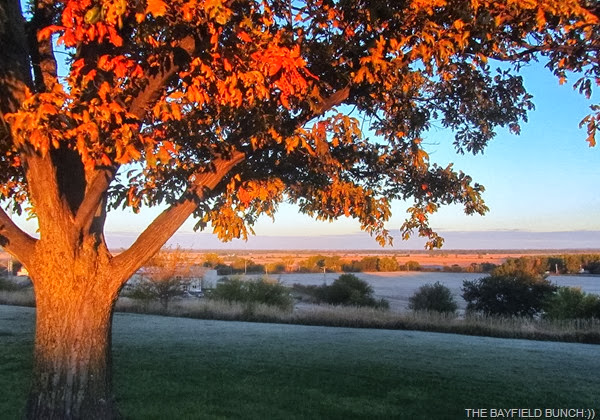 A COLD CLEAR NEBRASKA SUNRISE AS SEEN FROM A REST AREA WEST OF OMAHA
Nice looking clear & crisp Nebraska morning as we continued west on I-80.  Old Sol followed us till about mid morning when a large cloud bank rolled in obscuring his warming rays.  Never saw him again until early afternoon when he caught up & stayed with us the rest of the day. 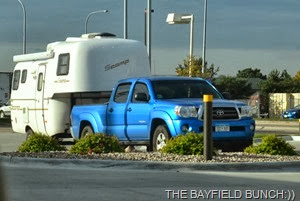 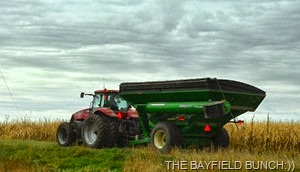 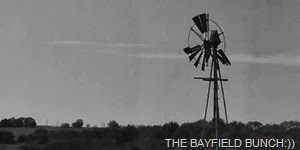 THIS OLD BARN ALONG HIGHWAY 81 REMINDED ME OF HALLOWEEN
When we reached Lincoln Nebraska I knew we were past Oklahoma City far to the south.  Figured we had been heading west long & enough & it was about time to swing Winnie’s nose into a soft Kansas breeze.  At the small hamlet of York Nebraska on I-80 we began our decent down highway 81 into clear skies & milder weather.  Although 81 is a 4 lane highway there was very little traffic on it.  Bonus. 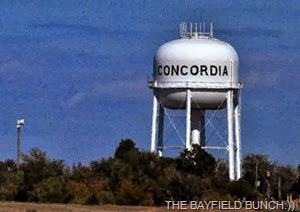 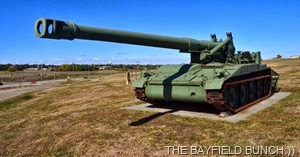 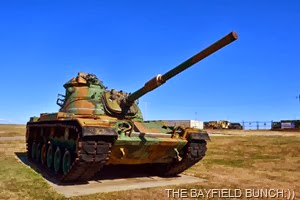 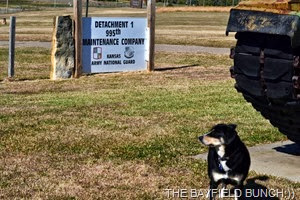 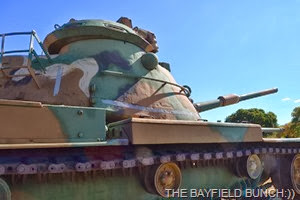 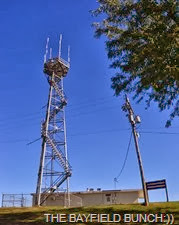 Because we were on the road early this morning we were again off the road early this afternoon.  Kelly was on line with FREE CAMPGROUNDS.COM when she spotted a county park in the town of Concordia about 50 miles north of Salinas Kansas.  We hit the Jackpot with this one.  What a little gem of an RV Park.  And it’s free with water & electric.  It’s right on highway 81 at Concordia’s south end.  Kind of in the country & easy to find because it is right across the highway from a Walmart store.  It is the BLOSSER MUNICIPAL AIRPORT AIR PARK.  Also home to Detachment 1 of the Kansas 995th Army National Guard. 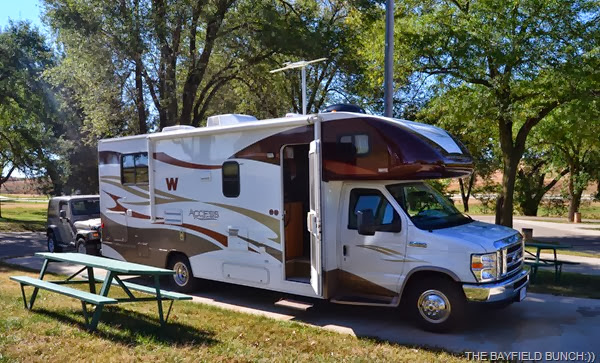 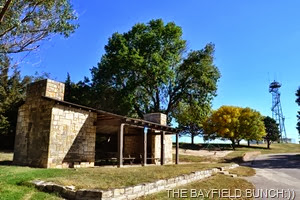 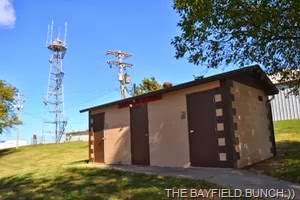 3 OF US HERE FOR THE NIGHT 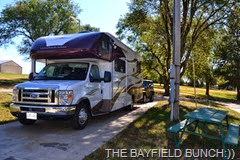 Appears to be 7 sites here with 4 of them pull throughs with level cement bases.  Lots of trees for shade & lots of running around area for dogs, cats, chickens, or a herd of horses.  We are parked only a few hundred yards from the hangars.  No big noisy planes but we did see an interesting nice yellow crop duster roll in &  park near us.  There is an army tank & large gun carrier to explore with more army vehicles parked in a compound.  Washroom with maybe showers & they even have a safe place for campers at the base of a large weather tower in case of tornados.  Only slight drawback to this park is a bit of noise from highway 81.  But other than that I would highly recommend an overnighter or a few days stay here for anybody traveling through this area.  Safe place for children to run & play on acres & acres of soft mown grass.  Oh & a good Verizon signal but no TV channels. 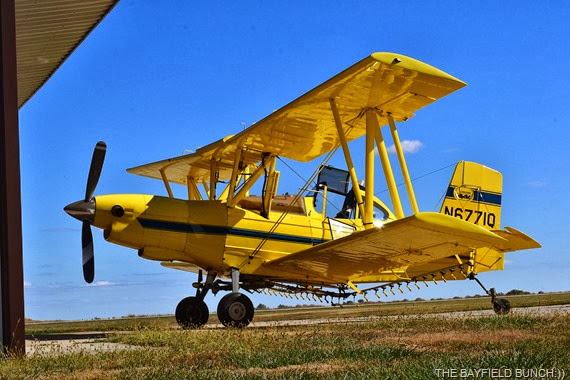 THIS FELLOW TAXIED IN JUST AFTER WE GOT SET UP 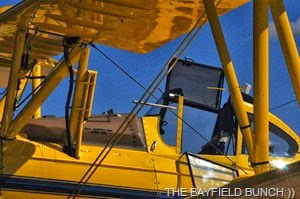 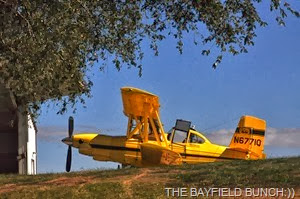 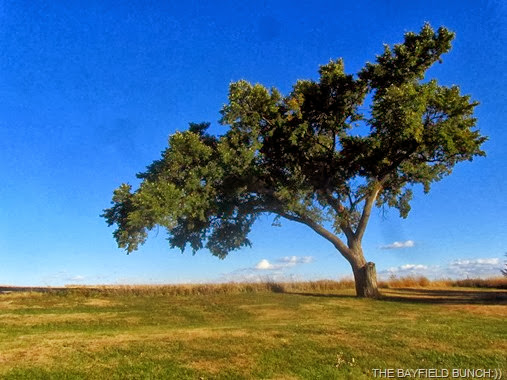 A LONE TREE IN THE CORNER OF BLOSSER’S AIR PARK
And a note to Peter & Bea way over there on Campobello Island.  Your friend Phil from Alberta who winters at Holt Hot Springs says to say ‘Hello’.  He is here in the Air Park tonight in his Class A Southwind spending a few nights before heading to California.  Says it’s still just a bit too hot over there west of Yuma.  Small world eh:))

OUR RIG ON LEFT & PHIL FROM ALBERTA ON THE RIGHT
And PETER in a comment asked, “Just wondering what you're doing in IOWA? That would not be the short route south, would it?”…….. No not the shortest route but we were not interested in the shortest route this time.  Did that St. Louis, Oklahoma City route 3 hurried times in a row.  We were in need of a scenery change & a slower pace.  We have done this Iowa/Nebraska route a couple times before but Tuesday we will head into some uncharted waters finally. 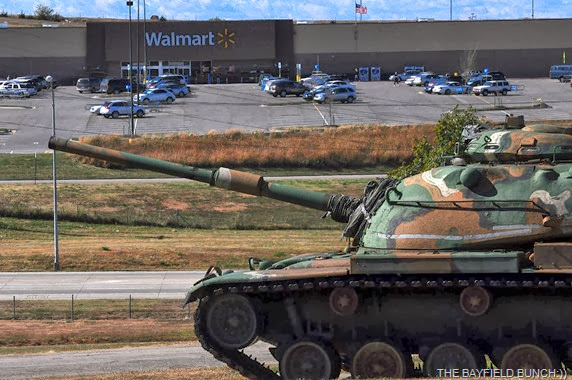 DID YOU KNOW THEY KEEP THE U.S. MILITARY ON STANDBY HERE BECAUSE OF ALL THE WALMARTIANS SPOTTED IN THE CONCORDIA KANSAS WALMART…YES APPARENTLY IT’S TRUE……………:))


We’re still wrestling with some of our electronic stuff.  I’m probably going to have to put our Sirius satellite antennae on the roof just the way it was done on the Damon.  Our Ipod works well with the adaptor but it’s the cigarette plug-in that appears to be faulty just like our Sirius satellite radio plug.  Can’t seem to figure out our surround sound system.  Was working fine but Gremlins have altered things again.  If it wasn’t for Kelly, nothing would be working here.  She just has the knack & the patience to stick with a problem until she has it figured out.  I stuck to the sidewalk one time when I got some gum on my shoe…………………..

GROANER’S CORNER:((  Time for some pun wouldn't you say.......
What do you call a country where everyone drives a red car?  A red carnation.
Energizer Bunny arrested - charged with battery.
A pessimist's blood type is always b-negative.
A Freudian slip is when you say one thing but mean your mother.
A hangover is the wrath of grapes.
Corduroy pillows are making headlines.
Every morning is the dawn of a new error.
Sea captains don't like crew cuts.
A successful diet is the triumph of mind over platter.
A gossip is someone with a great sense of rumor.
Reading while sunbathing makes you well, red.
A man's home is his castle, in a manor of speaking.
Dijon vu - the same mustard as before.
When two egotists meet, it's an I for an I.
A bicycle can't stand on its own because it is two-tired.
What's the definition of a will? (Come on, it's a dead giveaway!)
A backwards poet writes inverse.
In democracy your vote counts. In feudalism, your count votes.
A chicken crossing the road is poultry in motion.
If you don't pay your exorcist, will you get repossessed?
Show me a piano falling down a mine shaft, and I'll show you a flat minor.
If a clock is hungry does it go back four seconds?
The man who fell into an upholstery machine is fully recovered.
A grenade thrown into a kitchen in France would result in Linoleum Blownapart.
You feel stuck with your debt if you can't budge it.
Every calendar's days are numbered.
A lot of money is tainted. It t'aint yours and it t'aint mine.
He had a photographic memory that was never developed.
The short fortuneteller who escaped from prison was a small medium at large.
Once you've seen one shopping center, you've seen a mall.
When an actress saw her first strands of gray hair, she thought she'd dye.
Bakers trade bread recipes on a knead-to-know basis.
Santa's helpers are subordinate clauses.
Acupuncture is a jab well done.
Did you hear about the Buddhist who refused Novocain during a root canal? He wanted to transcend dental medication.
Shotgun wedding: A case of wife or death.
Without geometry, life is pointless.
When you dream in color, it's a pigment of your imagination.
He often broke into song because he couldn't find the key.
-------------------------------------------------------------
- Tourists see the world, travelers experience it.
- Home is where your pet is:))
- "If having a soul means being able to feel
love and loyalty and gratitude, then animals
are better off than a lot of humans."
(James Herriot)
- The pessimist complains about the wind; the optimist expects it to change; the realist adjusts the sails -William Arthur Ward
- The only thing better than right now will someday be the memories of right now...AL.
- It is not so much having nothing to do as it is not having the interest to do something....AL.
Posted by Al Bossence at 10/21/2013