WE HAVE BEEN DE-THRONED:)) 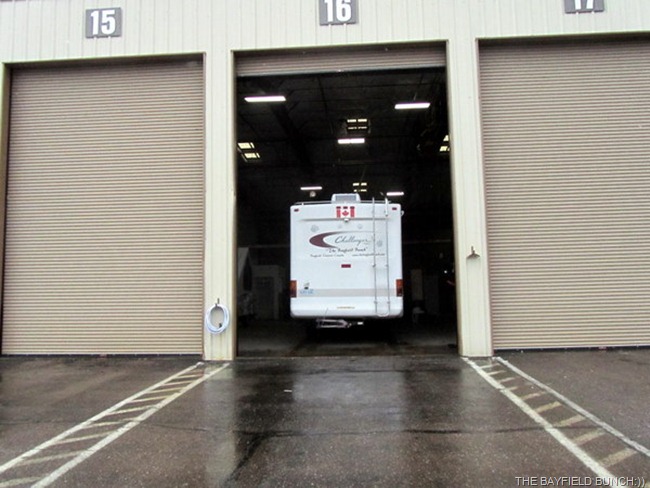 OH OH…..WE WERE BACK IN THE SERVICE BAY AGAIN TODAY

Heard the first pitter patter of rain on the roof at 5 a.m. and shortly thereafter that pitter patter turned into a steady downpour.  Was wishing I had tied the Jeep on the night before. (but, as it turns out….maybe not)  Doing outside stuff in a cold rain ranks very low on my ‘happy things to do’ list!!

We tried very hard to adjust to our new high throne toilet but by this morning we knew it just was not going to work for us.  Come what may, it was decided we had no choice but to bite the bullet and try to get the new ‘tall boy’ exchanged for a normal shorter one before somebody fell off and got hurt.

Kelly felt I had done enough damage with my ‘Seniors Moment caper’ at Camping World Monday morning so locked me in the closet before heading over to negotiate a toilet swap with the fellow behind the counter.  We have found through experience that women generally have a charm (and Kelly is a charmer) when it comes to dealing with male personnel in sticky sales oriented negotiations such as exchanging toilets.  But, before going to Camping World she decided to talk to the Lazy Days folks first.

In the pouring rain Kelly Jeeped the hundred feet or so to the Lazy Days office. Jennifer Sykora, the Service Advisor gal at Lazy Days felt the fellow who sold us the toilet at Camping World should have known enough to ask us if we had a riser in our bathroom.  Or at least come out to the rig to have a look  because he was handling the servicing.

Jennifer was extremely helpful and instrumental in helping us to resolve what was initially my mistake at Camping World Monday morning.   To Camping World’s credit, they were good about doing the toilet exchange for us at no additional cost.  Took a little time and a mountain of paperwork but it was a win-win situation for everyone involved and I think all parties learned a little something.  For us, it is to leave Al bound and gagged in the closet whenever important decisions have to be made.  One afterthought we had.  Would have been good for the installer guy at Lazy Days to have questioned the high height of this toilet and walked over to the waiting room where we were and double checked our decision.

Kelly was soon back to the Motorhome and we didn’t waste any time packing things up and squared away.  Minutes later we drove around the corner to the Service Check In Bay and a few minutes after that at 9:15 we were in the nice Lazy Days waiting room again with Pheebs wanting to meet everyone and put a big Slurpee on them.  Pets are not allowed in the vehicles during repairs because mechanics have disappeared. 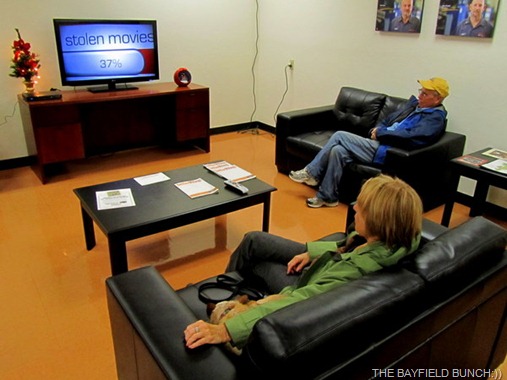 YOU CAN SEE THE LITTLE MOTORMOUSE TUCKED IN BESIDE KELLY 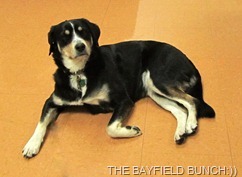 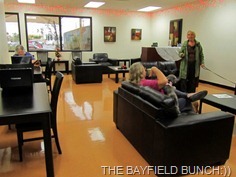 Our toilet swap was done by 11 and our coach was brought around for us and parked under a large canopy where we wouldn’t get wet.  Jennifer had suggested we would be more than welcome to spend the night right here on the Lazy Days service lot again complete with full hook ups (minus sewage) at no charge.  No point in driving through all this wet weather, she said.

We have nothing but good to say about our treatment here ever since arriving at the Lazy Days RV Park last Sunday.  All the staff we have come into contact with were very helpful and personable.  And they all loved Motormouse and the Pheebs:))

Camping World stepped up to the plate and did the right thing as well so we leave Tucson Wednesday morning with a good feeling for having been here.  Thanks everybody:))  By the way, cost for the new toilet plus installation was $380 with no extra charge for the swap.

And, I just gotta say how good Motormouse and Pheebs have been with all this disorganized jostling around these past 3 days. They both have just been the greatest little travelers with nary a whimper nor a complaint. Now, if I could just say the same for myself eh:))

So, that brings me up to the present.  We are still in Tucson, still at the Lazy Days service lot and……it is still raining!!!  The heavy cloud cover did lift for a few minutes late this morning to reveal a lot of snow on the mountain tops east of Tucson.

Tomorrow we head for the Ranch near Tombstone Arizona to begin yet another phase in our ever changing RV adventures.

LANDYACHTY joined us today as Blog Follower 390.  We appreciate you dropping by and thanks:)) 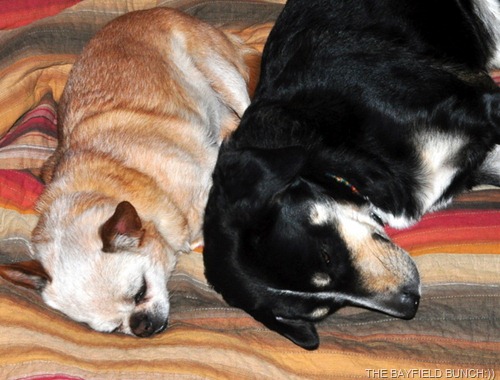 NOT MUCH TO DO TODAY EXCEPT SNOOZE THE DAY AWAY

Shout out to Phil in Phoenix.  I did upsize the print under the photos and changed the text color so hope that helps.  If not, let me know.

Reading SAM'S post this morning I see where there is some talk about traveling in Mexico.  I left a condensed comment on Sam’s post that went something like this….. As long as every thing is fine and goes off without a hitch, traveling in Mexico would be fine.  We would go down there ourselves. But, just one bump in the night whether a fender bender or whatever and things can go down hill pretty fast.  We had an INCIDENT south of Lukeville Arizona a few years ago that set us back on our heals and made us stop and think about any future travels in Mexico. That incident caused us to think realistically what could have happened that morning.  We have two dogs to consider who could be left sitting alone in our Motorhome somewhere if something became of us or we were detained somewhere for any length of time.  Especially in a different country with a different language.  This kind of thing is not uncommon in Mexico.  Topographically and weather wise I think Mexico is a great place but for us at this age and stage of the game, and the state of affairs in Mexico, we're not as quick to push the envelope that far anymore. If we get into any kind of trouble on this side of the border we feel confidant in receiving trusted help.  We do not have that comfort zone on the other side of the border regardless of where it is.

Being Canadians, I happen to think you American folks have a great country right here with a wealth of things to do and places to see.  If we meet strangers, chances are good they are going to speak a language I can understand.  To me that is an important safety issue.  I don't think it is as much a fear factor about going to Mexico as it is just remaining in an environment we feel comfortable with.  Everyone and every situation is different and it is a personal decision for each person knowing where their comfort level is.  Some may question our boondocking lifestyle and close proximity to the Mexican border but for us we are within our comfort zone here in these parts.

It’s just too cold to the north and there’s too many darned Allimagators wandering around over there on the south eastern side of the country for my comfort level………..10-4:))

And, just to let you know about the last photo in Monday’s post.  I did take the picture but debated whether to include it in the post.  For the first time since beginning my blog I consulted with my higher authority here about a questionable photo.  She put her stamp of approval on it so it ended up in the blog:)).

We would have been searching a long time late Monday afternoon for Peggy Sue’s restaurant because there isn’t one.  The Camping World employee giving us the referral mixed up Peggy Sue with her cousin Cindy Lou and we drove right by Cindy’s place.  The Triple T truck stop worked out just fine and I am 40 pounds heavier today for it.  At least I won’t blow away in the big southwest winds.

Didn’t realize until today the ‘Holiday Rambler Trip’ Motor Home I had some photos of in Monday’s blog is actually made by Monaco.  And, no pictures of the newest new toilet folks.  I think we’ve all had enough toilet talk to last us for quite awhile, besides it looks the same as the other one did, only 6 feet shorter:))

GROANER’S CORNER:((  A woman was driving her old car on the highway with her 7 year old son, Little Johnny in the back seat. She tried to keep up with traffic but they were flying by her. After getting caught in a large group of cars speeding down the road, she looked at her speedometer and saw that she was going 15 miles over the speed limit.
Slowing down, she moved over to the side of the road and got out of the way of cars behind her which in turn soon left her far behind. She looked up and saw the flashing lights of a police car.
Pulling over she waited for the officer to come up to her car. As he did he said, "Ma'am do you know why I pulled you over?"
From the back seat, Little Johnny yelled, "I do! Because with that big clunky lemon of yours you couldn't catch the fast cars!"