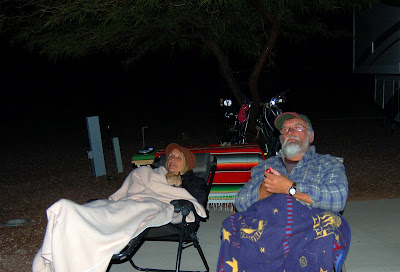 FRIDAY DEC. 14/07
Another perfect morning for a quiet walk in the desert. We could hear some donkeys far off but didn't see them. Also heard some coyotes in the opposite direction. Checkers seemed more like her old self & was out front leading the way for quite awhile.

Half an hour south of us is the Mexican border at Lukeville. On the other side about a mile into Mexico is a town by the name of Sonoyta. Kelly had read about a store there that she wanted to see so we thought we would take a drive down & have us a look at it. The drive to the border was uneventful & we just simply drove into Mexico at the crossing point. For anyone who has ever been to Mexico they know what I mean when I say the change is instantly dramatic. It's like night & day. Within seconds you go from a civilized society to an entirely different......whatever. Poof, just like that!! We have crossed into Mexico before but this was the first time with a vehicle. Right away I felt uncomfortable & the further we went the less I liked it. There are basically no rules here, especially on the roads. Standards here on a scale of 1 to 10 would be a 1-. Signs are different & not in English. We made a few turns here & there looking for the store when I inadvertently & slowly ambled through a stop sign. Had there been any traffic coming I would have seen it & stopped but the stop sign was on the left side of the street & said, Alto & it just didn't register in my mind as a stop sign. We had only gone a hundred feet when a guy came off the median from the left with his arm up in the air motioning for us to pull over, which I did. He was an older guy & leaned in very close to my open window & informed us in broken English that we had gone through a stop sign. I said I was sorry & thanked him for pointing out my mistake. He kind of humed & hawed around speaking in Mexican & broken English. We couldn't understand what he was saying but kind of got the gist of it. He didn't appear to have any kind of a uniform but had something written on his hat. He started repeating the word license & it was apparent he wanted me to give him my drivers license. Kelly spoke up saying, "don't give him your license!! We still weren't sure if he was a policeman or scammer. We asked him for identification & he said no so I eased the clutch out & started moving but he quickly pulled out a two way radio & I stopped. We again asked for a badge or identification. The situation was deteriorating. I again eased the clutch out but he pulled his coat back & it was then that I saw all the bullets in his belt but I didn't see a gun. Things were getting very scary, very fast, because we just did not know if this guy was legitimate & I still refused to give him my driver's license. We again mentioned I.D. & he actually got his wallet out showing us some kind of card. During the brief conversation he had used the phrase, fine & $20. Finally Kelly said to him, "do you want us to give you $20??" Then, for some unknown reason he straightened up, stepped back & motioned us saying, "go, go," We understand that part clearly so we up & went, went. To say this little incident really shook us up would be putting it mildly. We went a couple of blocks & Kelly spotted the store she was looking for so we made our way up a narrow debris filled street & around the block. I felt like we were in a war zone like you see on television in those terrible scenes from Baghdad. I got parked in front of the store & Kelly went in. I had intended on going in, maybe taking some pictures, etc but after our encounter in the street I put the windows up, locked the doors, & stayed with the car. There was some pretty scruffy & scary characters milling about & 2 of them approached my window but I ignored them. Of course Kelly took what seemed like 10 hours in the store & as soon as she came out we made a bee line back to the border crossing, all the while waiting for the Mexican police, or whoever they were, to pull us over. The wait to get back across the border seemed like forever because there were about 15 vehicles ahead of us. Kept looking in my rear view mirror expecting trouble because we still weren't sure what had just happened. Was that a real policeman or was it a scammer. Why did he suddenly tell us to "go,go!!" We finally made it the American side customs where we had to show our Passports. The guard checked us out on the computer, handed our passports back, & said, "have a good day:)) Can you imagine the feeling of relief we experienced as we hastily headed for home. "WOW" We are still not sure what really happened but one fellow we talked to here at the RV park who is familiar with the Mexican way of doing things said the guy who flagged us down was probably a Mexican militiaman who could have caused us a lot of grief. He said we were very, very, lucky to have gotten out of there because the corruption everywhere is rampant. Sooooooooooooooo, here's the bottom line for us. We will never drive a vehicle into Mexico again. There is basically no law there & you are at the mercy of anyone who wishes to cause you grief for whatever reason, whenever!!!!! Our total time in Mexico this morning was only about 45 minutes but that was long enough to learn that we will never do that again...............Lesson learned!!

The rest of our afternoon was spent soaking up a bit of sun & talking to the fellow who looks after the RV park here. Really nice fellow by the name of Ray whom we remembered from last year when he gave us our last night here free. The Indian band just got him a computer a few days ago & he is waiting to have it hooked up in a few weeks & wondered if we could help him set up a website for the park so we agreed to do that when we return to this area next month. I'll do up some nice photographs of the park & Kelly can get the site registered, etc. He has given us a couple free nights so instead of leaving to-morrow morning we will leave on Sunday morning.

After supper just after dusk we slipped outside to watch for meteorites. It's the annual Geminid meteorite shower night but the only flashes in the sky we saw were from my camera when I took a couple of pictures of us. Notice little Cora peeking out from under Kelly's blanket. We had the blankets because of the cold & clear Arizona night. We did see nearly a dozen satellites passing overhead though but not one meteorite. But hey, it was definitely a better ending to the day than it could have been.................sitting in a Mexican jail!! Like I said before..............lesson learned!!