AL SPENDS THE NIGHT IN A TUCSON HOSPITAL:(( 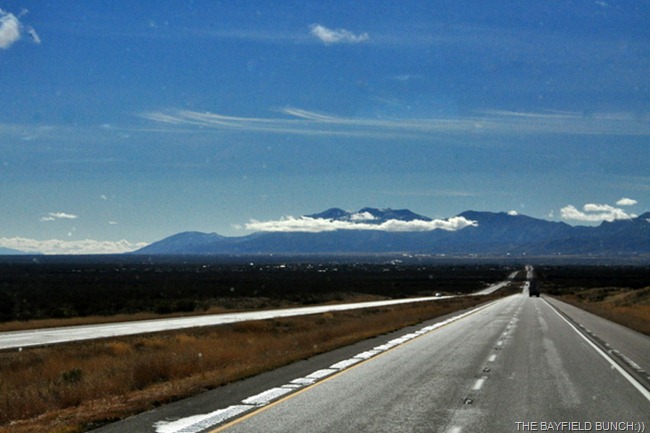 SOUTHBOUND ON HIGHWAY 80 THROUGH THE SAN PEDRO VALLEY
Tuesday’s all day rain enabled me to finish the blog and post it on the early side yesterday.  Good thing I did because about half an hour later I suddenly felt a worsening pain in my lower left back.  Within minutes I recognized the tell tale signs of an old and very painful enemy.  Kidney Stone!!!!

Anyone ever having a kidney stone will understand the world of pain I am talking about.  Had one back in October of 07.  We were heading for the Southwest at the time when I ended up in a hospital emergency room in Limon, Colorado.

Tuesday nights pain just continued to get worse.  Tried a couple extra strength Tylenol but who was I trying to kid.  Last place I wanted to go was the hospital again but by 10 o’clock I could not stand the pain any longer and through in the  towel.  I knew what this was going to do to our health insurance coverage next year. 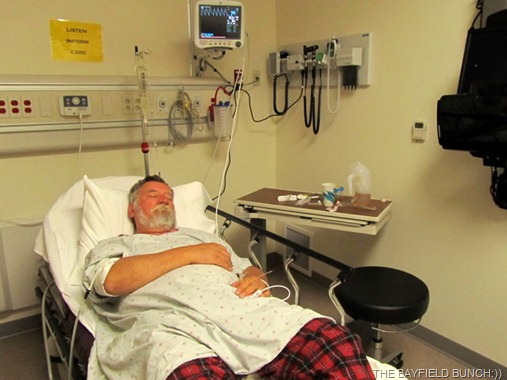 Kelly had gone to bed but I had to wake her up.  Threw up in the washroom because of the pain.  Kelly scrambled to get dressed and we were soon in the Jeep with our Garmin looking for a hospital.  At least Kelly got dressed, I didn’t.  I was still in my pajamas.  You will remember my mismatched night attire from a few blogs ago.  A few wrong turns along the way but we finally managed to find THE UNIVERSITY OF ARIZONA MEDICAL CENTER.  You may remember this hospital as the one Congresswoman Gabrielle Giffords was taken to after being shot on January 8th of this year during a meeting with constituents in a Tucson shopping plaza.


I’m not going to go into a long detailed story about what happened next so let’s just give the hospital the benefit of the doubt and say they were very busy I guess.  Despite my obvious writhing in pain I did not receive a saving shot of morphine until nearly two hours after walking through the doors of the Emergency room.  After all, the reams of paperwork are of prime concern, right!! 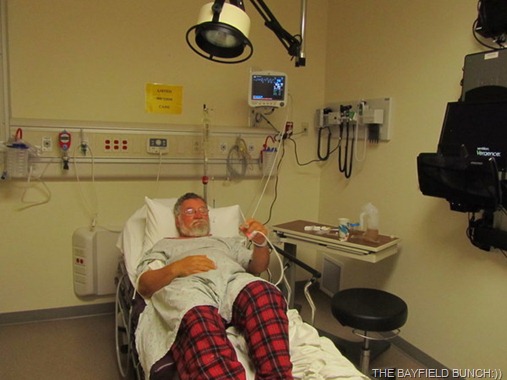 I was placed on a comfy bed in an isolation room with a pressure/heart/temperature monitoring system on one arm and and an IV drip on the other.  That IV thing was painful going into my arm.  Buckets of blood were drained.  Turns out, despite the pain, I was the lucky one though.  Poor Kelly spent the entire night sitting on a chair near my bed.  I insisted she go back to the rig but she opted to stay.  If you knew of Kelly’s sleep priority you would understand her sacrifice.


The morphine shot only took the edge of the pain and at 3 a.m. they administered something else called, T?????  and that did the trick in bringing the pain factor down to zero.  Also put me into the woozy zone.  I remember seeing Kelly sitting at an odd angle in the straight backed chair with eyes closed trying to find a few scraps of sleep. 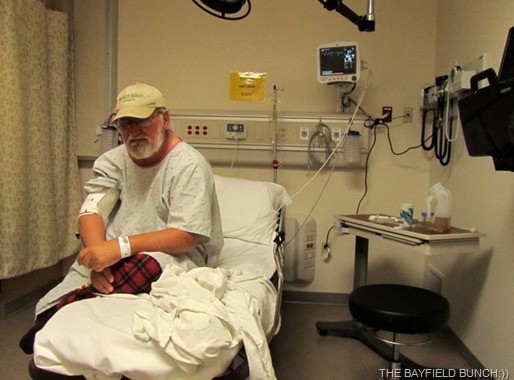 Sometime in the predawn hours I was wheeled down a series of hallways finally ending up face to face with a ‘Cat Scan’ machine.  This was a painless procedure that took only a few minutes.  Noticed in that short period of time the Scan operator received 7 cell phone calls.


A Doctor finally came in sometime later apologizing profusely for all the delays that had occurred after we had first entered the hospital.  He also had the results of the Cat Scan.  Not so good:((  I have a large 1.5 centimeter kidney stone that is too large to be pass naturally.  Only 3 ways to get a stone that large out of the human body.  Dynamite, ultra sound waves to smash the stone and…..well, let’s just say the third procedure just kinda makes my eyes water a bit!!


I was going to have to see a Urologist as soon as possible because they are the people who perform those kinds of procedures.  As hard as he tried, the Doctor could not get me an appointment until December 21rst.  Not good but that is the way it is.  I have to be back at the Tucson hospital at 10 a.m. to have this large rock removed one way or the other.  Maybe the dynamite option would be quick and painless. 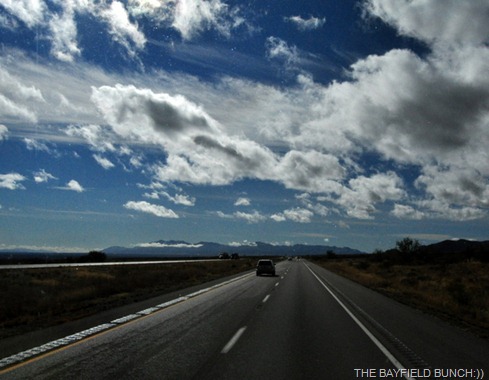 HUACHUCA MOUNTAINS DEAD AHEAD
Kelly did manage to slip back to our rig for an hour around 6:30 to let the poor little doggy guys out for a pee.  She returned to the hospital and we waited until after nine to get the final paperwork and prescriptions all worked out.  I am not a pill guy and do not like having to take pills of any kind but it looks like the next 7 days they have me on some pretty powerful pain killing drugs.  Oxycodone 325mg and Ibuprofen 800mg.  It was another 40 minute wait at the hospitals pharmacy to get these prescriptions filled.  And yes, I was aware of the stares I was getting with my mismatched plaid pajama outfit, old green robe, brown hush puppies and beige baseball with Bayfield Bunch Canada written on it.


How nice it was to walk out of that 10 hour hospital ordeal into a bright sunny morning.  The snow on the surrounding mountains looked especially beautiful and picturesque.  Of all large cites in North America I think Tucson is one of my favs.  I drove the mile or so back to the rig making the usual wrong turns of course.  Kelly made those same  wrong turns when driving back earlier in the dark in the morning rush. 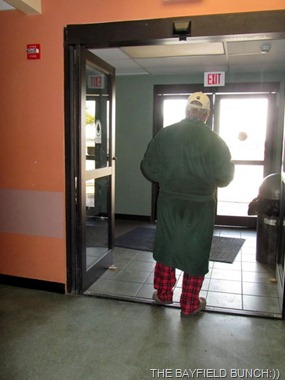 EXITING THE TUCSON HOSPITAL THIS MORNING
We weren’t long in getting the rig packed up for travel and by 10:35 we rolled out of the Lazy Days service yard headed for Cochise County and the Ranch.  I just kept marveling at the snow capped mountains and blue skies with big white puffy clouds.  What a great feeling it was knowing we were heading for the land of many memories.


A right turn off I-10 on highway 90 at Benson took us south past the Kartchner Caverns and down the San Pedro Valley.  The landscape took on a warm familiar look as I gazed across the Valley at the Dragoon Mountains to the East.  Straight ahead lay the memorable Huachuca Mountains.  The domed Naco Peak in Mexico loomed high off the desert floor.  To the east of Naco Peak lay the Mule Mountains with their arms lovingly wrapped around their little Alpine jewel, Bisbee.
South of Tombstone we swung east on Davis Road and rolled right on through between the Dragoon and Mule Mountains.  This winding road over hill and dale led us into the Sulphur Springs Valley where the Ranch is located.  How great it was to once again see the heavily snow capped Chiricahua Mountains to the far left and the Swiss Helm Mountains straight ahead.  So many memories and so many memories to come. 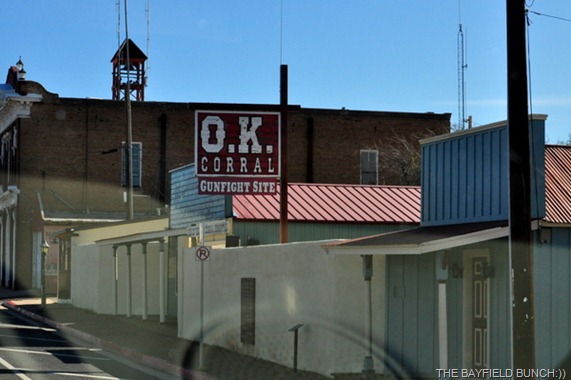 Rolled through the gates of the ranch at 12:30 making it in slightly under 2 hours from Tucson.  Jeanie and Ray were working about in the yard and how great to see them again.  Ranch dogs Pearce and Gleeson are fine but have noticeably slowed down from a couple years ago when we were here.  Chickens are all doing great but don’t lay eggs anymore.  Charlie the cat has moved indoors.  And, ranch donkeys Poncho and Sarah are still here but married off their young daughter Nellie to a handsome young donkey fellow up the valley. IN THE PROCESS OF GETTING SET UP AT THE RANCH
Kelly and Jeanie headed off to Sierra Vista for a little shopping while Ray and I got caught up on 'what’s new'.  So nice to be back at the Ranch again after a couple years.  Last year we were at a different property a few miles away over near Elfrida.  Awwww yes, let those big beautiful sunrises and sunsets begin:))

ON DAVIS ROAD BETWEEN THE MULE AND DRAGOON MOUNTAIN RANGES
GROANER’S CORNER:((  After a long, dry sermon, the minister announced that he wished to meet with the board following the close of the service.
The first man to arrive and greet the minister was a total stranger. "You misunderstood my announcement. This is a meeting of the board members," explained the minister.
"I know," said the man, "but if there is anyone here more bored than I am, then I'd like to meet him..."
BAYFIELD BUNCH PHOTO ALBUMS https://picasaweb.google.com/117858411710794543295
The only thing better than right now  will someday be the memories of
right  now...AL.