FROM A FREEZING 32F THIS MORNING IN NEW MEXICO TO A SWELTERING 81F THIS AFTERNOON IN ARIZONA:)) 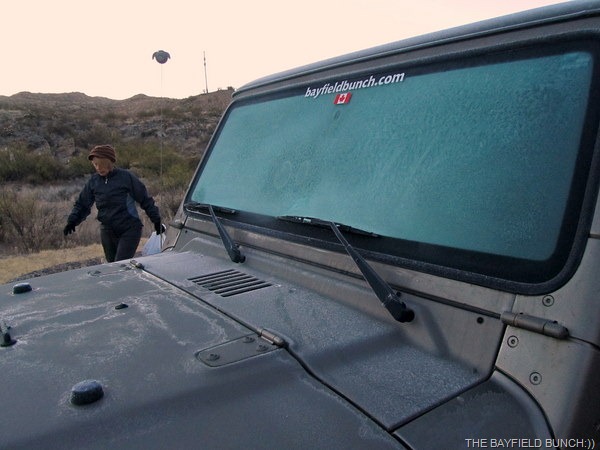 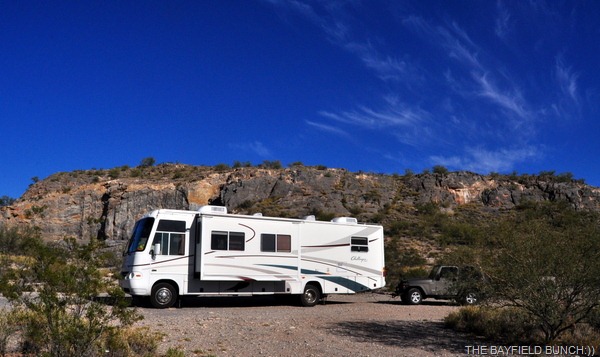 FROST ON THE JEEP’S WINDSHIELD AND FROM A FREEZING 32F THIS MORNING WE HEADED FURTHER WEST TO A SWELTERING 81F THIS AFTERNOON
After double checking the areas weather again this morning in Truth Or Consequences New Mexico we made a snap decision to change our plans and make some fast tracks further west into Arizona.  On Thursday we had planned to do laundry and take a drive over to Elephant Butte State Park to see if we could locate RV SUE AND HER CANINE CREW as well as another couple she knows there.  Friday we had planned to head up into the Silver City area to Glenwood and do the ‘Catwalk’ that John and Judy at RV LIFE ON WHEELS had done last week.  With the incoming storm front packing possibly heavy rains we just did not feel like sitting here in this areas colder temperatures for the next 3 or 4 days with a poor Verizon connection, no cell phone and few TV channels.  We also received an email that required attention so needed a strong Skype connection.  Our plans are to slide back this way on our return journey later this winter and do the Glenwood area and some other New Mexico spots then.  Just gotta love New Mexico:)) 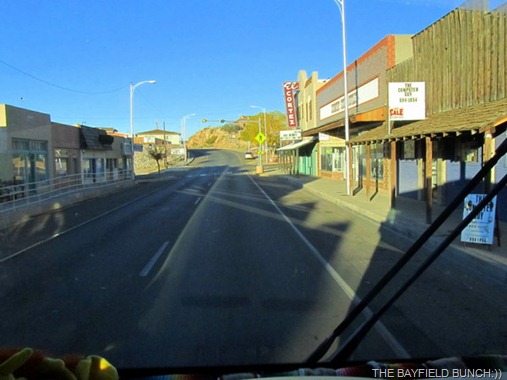 WE QUIETLY TIPPY TOED THROUGH DOWNTOWN TRUTH OR CONSEQUENCES EARLY THIS MORNING
Due to our poor Verizon connection in T or C I have not been able to access photos in some blogs or leave comments in others. My ‘Shout Box’ and ‘Blog Followers’ list wouldn’t open either. Fell asleep waiting for my blog to publish Wednesday night so it may have taken nearly an hour or maybe more. 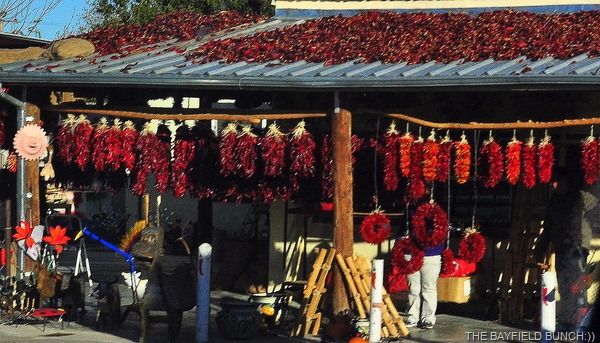 THIS ONE PHOTO ABOUT SUMS UP THE CHILI PEPPER NEW MEXICO TOWN OF HATCH
I had unhooked the Jeep Wednesday night in preparation for our stay in Truth or Consequences but first thing this morning at 32F I scraped the ice off the Jeep’s windshield and hooked it back up to the Motor Home.  Total distance driving the Jeep while unhooked…oh maybe 30 feet!!  We were back on the road by 7:20 heading for that big old Arizony State and the Sonoran Desert.  I programed Tucson into my computer head, pulled my hat down, fixed me a stare on the western horizon, wiggled my ears, twitched my nose and we were off. Oh, how we are looking forward to warmer temps and big Saguaro Cactus again:))))))))

NOW, THAT IS A LOT OF SOLAR POWER
Ok, before I go any further, here’s something I messed up in Tuesday’s blog.  I mentioned about a self guided audio Auto Tour at Valley Of Fires.  That is incorrect!!  I got the Auto Tour mixed up with the Bosque del Apache National Wildlife Refuge.  No driving tours over the Lava Flow!!  I have since made the correction in Tuesday’s post.
I THINK SOMEBODY HAS A ‘MAD ON’ 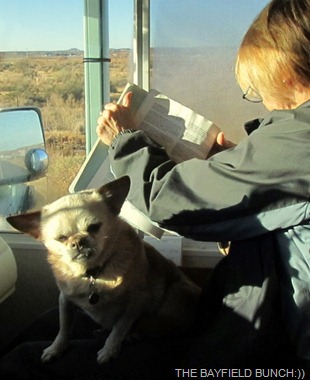 Once again a beautiful clear morning for driving.  Heading south on I-25 the surrounding distant mountains looked majestic wrapped in their early morning blue gray haze.  Took the shortcut to Deming through Hatch and rolled through there at 8:10.  A distant wave and hello to fellow RV Blogger BOONIE somewhere in the desert south of Hatch.  We met Boonie up in Silver City one time. 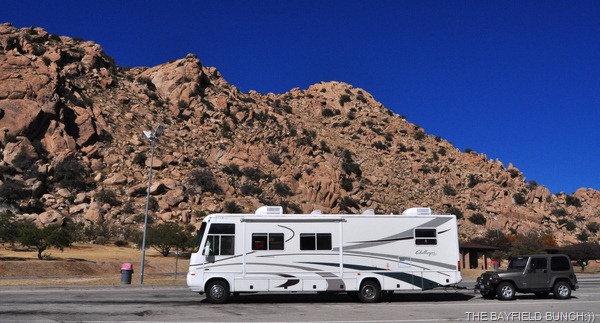 THE TEXAS CANYON REST AREA ON I-10 JUST EAST OF BENSON ARIZONA
About 25 minutes later I recognized a familiar mountain ridge looming out of the desert floor on the southwestern horizon.  It was the razor backed ridge of the Little Florida Mountains.  I knew Deming was just to the northwest of them and by 9 we were in downtown Deming itself. 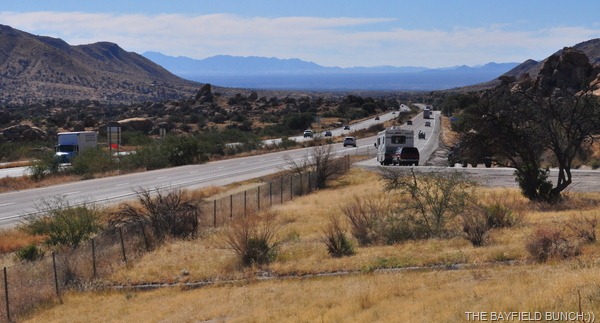 LOOKING WEST ALONG I-10 IN THE DIRECTION OF BENSON
An hour later we were westbound out of Deming with a full fuel tank, full propane tank and 4 full tummy tanks.  I was able to share a couple McDonald’s Burritos with the Kids:))  Looked southward as we left Deming to see another favorite set of mountains.  The 3 Sisters just north of Columbus were still there so all was still right with the world.

Two heads are better than one and not long after leaving Deming we had another example of that again.  First, let me say, just as I always have….I believe women are far smarter than men…period!! At normal highway speed our rig’s tachometer usually runs about 2100 rpms.  I noticed after awhile we were running at 32 and 3300 rpms and the rig didn’t seem to want to shift into it’s final gear.  I spent a fair bit of time thinking about this, slowing down, speeding up, shifting gears and just basically grumbling to myself with all kinds of worse case scenarios.  Finally mentioned it to Kelly who took all of 3 seconds to diagnose the problem.  She said, “is that overdrive switch in the right place?”  BINGO!!  Seems a little Pheebs nose, paw or happily wagging Bum had clipped that switch which is low on the dash.  I flicked the overdrive switch back to where it should be and the rig immediately shifted into it’s normal drive mode and the revs dropped back down to 2100.  Let me tell you folks, I happen to know a few things about the fair opposite sex and when I tell you they have it all over us guys I know what I am talking about.  Trust me:)) 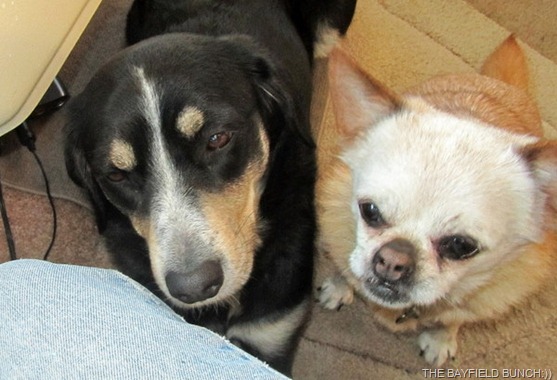 THESE TWO LITTLE DOGGY BUMS ARE FOCUSED ON MY TURKEY SANDWICH WHICH JUST CAME UP FROM THE RIG’S GALLEY
East of Lordsburg I began scanning the mountain ranges to the south because we were approaching some very familiar territory and it wasn’t long before I spotted the long hulking grey shape of the mighty Chiricahua Mountains towering higher than the closer Peloncillo Mountains.

A big wave to John and Judy at RV LIFE ON WHEELS who we knew were just down the Animas Valley at RUSTY'S RV RANCH near Portal Arizona.  Crossed the Arizona State line 5 minutes later.  If any of you folks have not been to the Portal Arizona area, mark it down in your travel plans because you are going to want to go there.  Type Portal or Paradise or even John McAfee into our ‘Search’ bar.

As we headed west on I-10 between Wilcox and Benson Arizona my head was awhirl with countless great memories from our time spent here in the Sulphur Springs Valley between the Chiricahua and Dragoon Mountain ranges.  There was Bowie peak which brought back our hike to Fort Bowie a couple years ago.  Remember to type these places into our Search bar.  The twin peaks of Dos Cabezas brought more memories.  Passed the Cochise Stronghold exit at 12:20 p.m.  Caught a distant glimpse of the Swiss Helm Mountains and the memories in my head just rolled on and on.  Tombstone, Elfrida, The Ranch, Sierra Vista, Douglas, Paws and Hooves, Pearce, Grapevine Canyon Ranch, the Lazy W Ranch, Bisbee, Rucker Canyon and on and on and on.  I am already looking forward to getting back to this whole area later this winter.  The very area that has been so good to us these past 3 years and an area I definitely consider our second home. 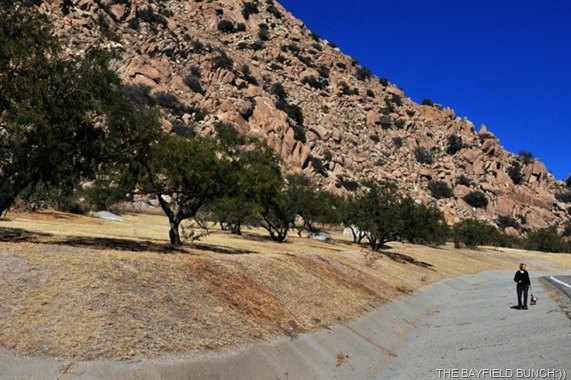 KELLY AND THE MOTORMOUSE ARE DWARFED BY THE HUGE ROCKS AT THE TEX CANYON REST AREA
A big Hi-Ho Silver wave to JERRY AND SUZY as we rolled past Benson Arizona at 1 o’clock.  See you guys later this winter:))  Noticed the traffic really picked up at Benson and was steady all the way to Tucson.

PICKING OUR WAY WEST ON THE AJO WAY IN SOUTHWESTERN ARIZONA
There is a stretch of I-10 where we always closely watch for our first Saguaro Cactus every time.  Watch for the small sign that says Davidson Canyon and look immediately down to your right.  Saguaros:))  Yaaaay, we are in the Sonoran desert once again. 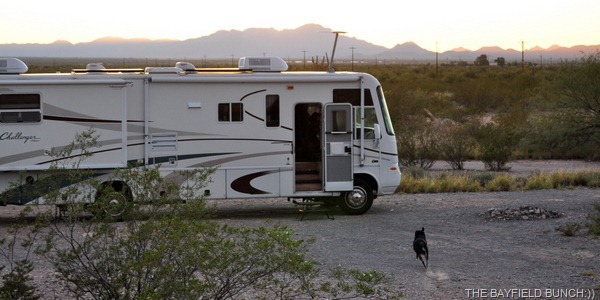 PHEEBS KICKS UP DUST AS SHE RACES FOR THE MOTOR HOME AFTER KELLY CALLED HER FOR SUPPER…WEST OF TUCSON ARIZONA NEAR THE AJO WAY
It’s the day before Thanksgiving and one of the heaviest traffic days of the year so I wasn’t wasting any time as I swung the rig off I-10 onto the Ajo Way.  Traffic was heavy stop and go from traffic light to traffic light with a couple jamming stops for amber lights which re-arranged some furniture for us.  But, it wasn’t long and we were free of the City’s grip and out onto the desert floor. 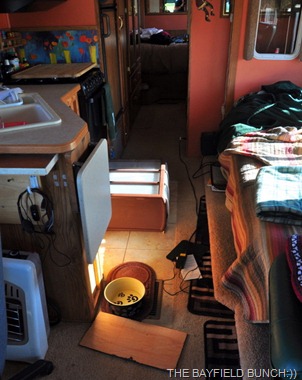 SUDDEN STOPS HAVE A WAY OF RE-ORGANIZING THINGS IN RV VEHICLES
A few years ago we had spotted a boon docking area on the northeast corner of Ajo Way and San Joaquin road so that is where we headed and that is where we are right now nestled up against a large rock face with the whole city of Tucson just on the other side.  It’s 81F and we are just a cookin.  Didn’t take me long to haul off my too warm T-shirt and get myself into a light cooling shirt.  Looking forward to the cooler desert nights.  Yep, we are finally in nice warm air and that’s a big 10-4:))  In the morning we will be on the road again for another hundred miles and tomorrow night we’ll be all set up in one of our all time favorite boon docking areas. But, if there is poor or no Verizon service there we will have to move on.  It is imperative that Kelly has a good Verizon and cell phone connection for her Deer Park Lodge work. 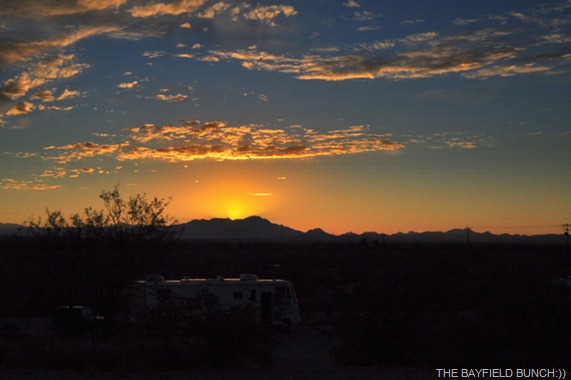 WE ARE ALL SNUGLY TUCKED AWAY FOR THE NIGHT UNDER WARM ARIZONA SKY’S
While typing this tonight I suddenly remembered something.  We have 4 boxes of Shreddies cereal packed away for an RV couple camp hosting at the Kartchner Caverns.  We totally forgot to drop those off today and blew right by that exit back in Benson.  I hope those folks can hold out until we get back in the area later.

THIS IS A 300mm SHOT OF KITT PEAK ABOUT 45 MILES AWAY FROM WHERE WE ARE BOON DOCKED…YOU CAN SEE A COUPLE OF THE OBSERVATORIES JUST LEFT OF CENTER…I SPENT A COUPLE HOURS UP THERE 4 YEARS AGO AND REMEMBER TOURING THE TALLER ONE VISIBLE IN THE PHOTO…IF I WOULD HAVE HAD A STRONGER VERIZON SIGNAL TONIGHT I WOULD HAVE INCLUDED THE LINKS
GROANER’S CORNER:((     A professor was walking along a very narrow hall when he came face to face with a rival.
The passage way was too narrow for two to pass. The rival, pulling himself up to his full height, said with a sneer, "I never make way for fools!"  Smiling, the gracious professor stepped aside and with a bow replied, "I always do."
---------------------------------------------------------------Tourists see the world, travelers  experience it.
-Until one has loved an Animal, their  soul remains un-awakened.
BAYFIELD BUNCH PHOTO ALBUMS https://picasaweb.google.com/117858411710794543295
The only thing better than right now  will someday be the memories of
right  now...AL.
Posted by Al Bossence at 11/23/2011