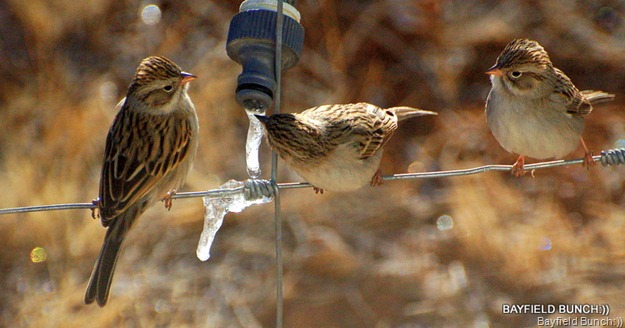 Figured we had to be in some kind of tropical heat wave early this morning when I saw the thermometer sitting at 23 instead of 19F.  I think we got up to around 60 something later. 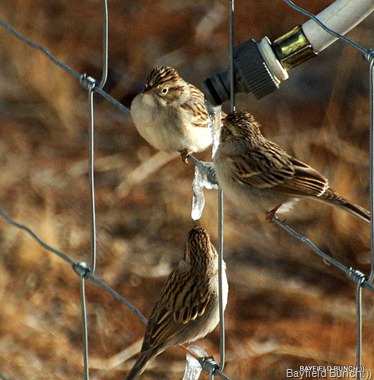 What a difference a day makes.  Monday I couldn’t even muster up enough energy to give JB & BRENDA a big return ‘Howdy’ wave when they rocketed westward on I-10 about an hour north of us heading for Usery Mountain northeast of Phoenix. 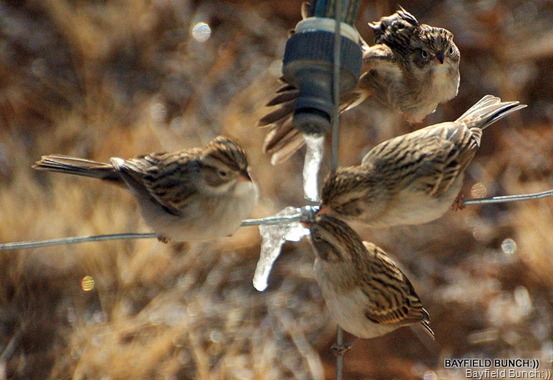 Hauled myself into bed about 9:30 last night & did manage to get a much better sleep despite my brain waking me up half a dozen times to see if I was still in the land of the living!!

NEVER ANY CROWDING OR FIGHTING…THEY ALL PATIENTLY AWAIT THEIR TURN

Max & Checkers were doing a lot of sniffing & gruffing around a garden shed not far from our rig this morning so I got a flashlight & had a look under the shed.  There was a critter under there alright but I couldn’t quite make out what it was.  Seemed to be shuffling around a bit & had a very light colored & very furry tail.  Thought I saw some black & white so hope it wasn’t a Skunk.  Not even sure if they have Skunks in these parts.  Later in the day I took my camera over to see if I could get a picture but it had already vamoosed.

After soaking up a bit of warm morning sunshine we hustled ourselves down to Douglas Arizona & made the McDonald’s breakfast menu with just 2 minutes to spare.  In fact, they were just changing the menu boards when we were at the counter.  Kelly had used the ‘McDonald’s’ incentive in getting me to come along with her to J.C. Pennys.  Seems to work every time & I never get smart to it.  She also knew she might be in Pennys for awhile so wily Coyote Kelly even slipped the book I am currently reading into the Jeep before we left so I would have something to keep me busy in the parking lot while waiting.  It worked:)) 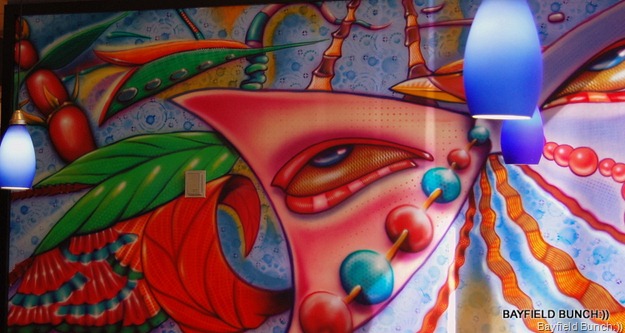 WE BOTH LOVE THE BIG BOLD EVER PRESENT COLORS IN SOUTHWEST DESIGN…..THIS WAS INSIDE McDONALDS. 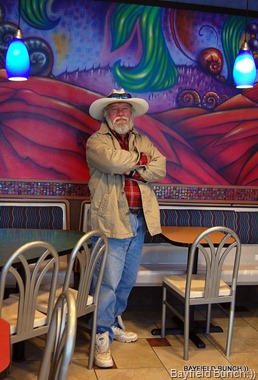 Not to be outdone in the shopping department while waiting I spied a ‘Dollar General’ store next to J.C. Pennys.  Figured if Dollar General had that 70% discount like J.C. Pennys I might find a real bargoooon for thirty cents:))  I didn’t!!  But, I did get a new coffee cup for a buck plus a litre of 10W-30 Motor Oil to pour on my morning cereal:)) 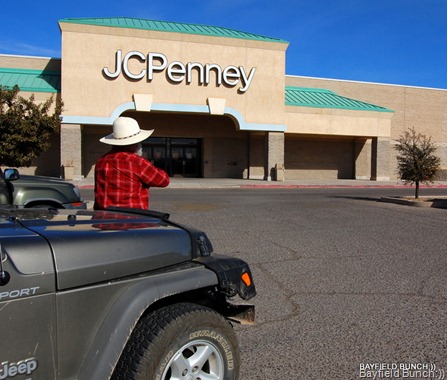 NOPE, I’M NOT GOING IN THERE & YOU CAN’T MAKE ME NEITHER!!

My patience was holding up real good all morning so figured I would be alright helping push the grocery cart around in Wal-Mart.  I lasted about a minute & half & had to totally exit the whole grocery section.  What is it with people that they have to be on their stupid cell phones yammering & texting like a bunch of maddened Magpies while leaving their shopping carts blocking aisles, crashing into bins & plowing into other people’s shopping carts. Yap,yap,yap-peck,peck,peck!!!!  I think cell phones should be left at the door so people can concentrate on their shopping & be considerate of other shoppers around them.  I also wish someone would hurry up & invent a small electronic device that I could carry & every time I pressed the button it would transmit a signal to the nearest inconsiderate cell phone user’s phone & emit a very loud & aggressive growling fart sound right out of their cell phone!!!!

CAN YOU SEE THE 2 LARGE PAINTED BIRDS

While parked at a health food store behind the historic GADSDEN HOTEL in Douglas this morning I was reminded of our visit there a couple years ago.  Pancho Villa is reported to have rode his horse into the Hotel lobby years ago & right up the grand stair case.  This Hotel with it’s beautiful old lobby is reported to be haunted but I didn’t detect any ghosts in any my following photos.  Maybe you will have better luck:)) 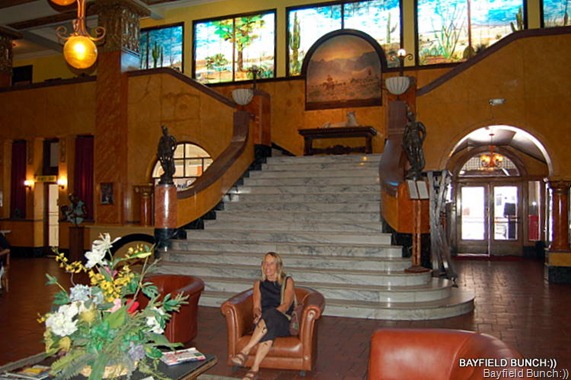 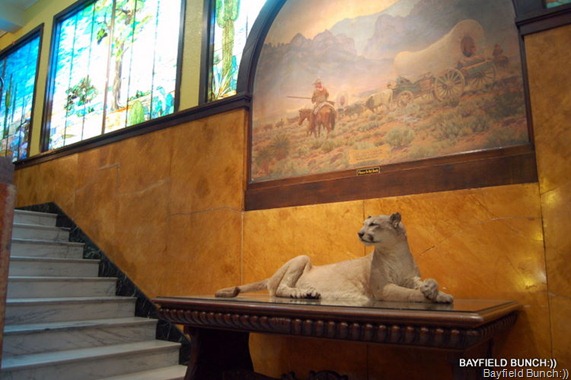 A week ago or so I posted a photo that I had taken in Palm Canyon, Borrego Springs.  The photo showed what appeared to be a barren rock surface.  Upon later examination I saw some Big Horn Sheep in the photo & thought I counted 6.  After posting it in the blog some people saw more Sheep & some saw less.  A good friend of mine in Kitchener Ontario has taken that photo & enhanced it to the Max.  He found & numbered 11 Sheep in total.  Below is the enhanced photo.  Hard to find number 11 but it can be found at 5 o’clock or bottom right of photo.  Don’t know what kind of an enhancemagator machine you got there Bob but it should clear up once & for all just how many Sheep are actually in the that photo.  Thanks Buddy:)) 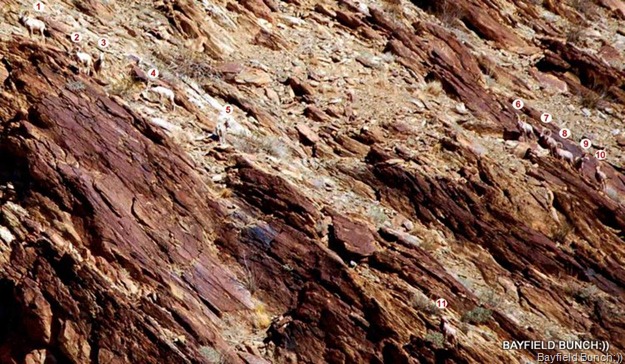 Some of you folks may remember my post from December 15th a month ago entitled, ‘THE OLD WEST IS STILL ALIVE IN THIS LITTLE BOYS MEMORY.’  Shortly after that post I received an email from long time blog reader Jenny J over at ELEVEN FOOT RV which stated, “Al, I just ordered you a copy of The Big Book Of Cowboys --now I need an address to send it to -- Merry Christmas!!”  After Monday’s photo class I stopped by the Elfrida Post Office & sure enough, a parcel had just come in for me.  Thank you so much Jenny.  You brought this little boy’s memories alive again as I sat here yesterday reading through the book’s pages & looking at the big as life colored Cowboy illustrations.   I was a kid all over again.  Thank you so much Jenny & I appreciate your kind thoughtfulness:))

I am starting to feel pretty spiffy in my new threads & I am a bit uncomfortable with that.  Figure I’m just going to have to take all my new duds outside & give em a good old kickin around in the
Arizona dirt just to keep myself grounded.  Had to do that 4 years ago in New Mexico when I bought my black Cowboy hat.  Just wasn’t comfortable walking around with my head hung under a brand new shiny Cowboy hat…………..10-4:)) 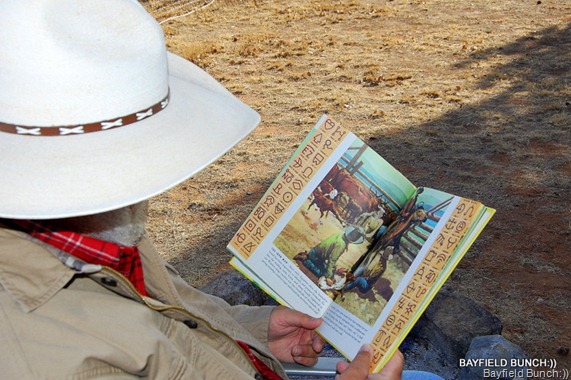 GROANER’S CORNER:((  A doctor examined a woman, took the husband aside, and said, "I don't like the looks of your wife at all." "Me neither doc," said the husband. "But she's a great cook and really good with the kids."