TWO THUMBS UP FOR RENEGADES 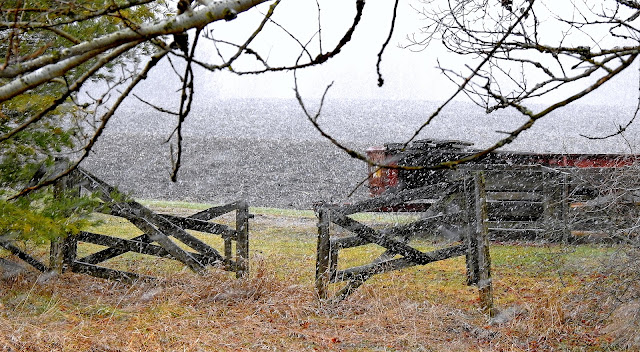 A few snowflakes in the air when Pheebs and I headed out this morning and after a few minutes there were quite a few snowflakes in the air.  The lite snowfall lasted most of the morning but didn't amount to much.  With temps hovering around the freezing mark the snowflakes mostly melted on the ground.  Needless to say, we didn't go too far again this morning and it wasn't long after snapping a few pics along the way that we were headed home. 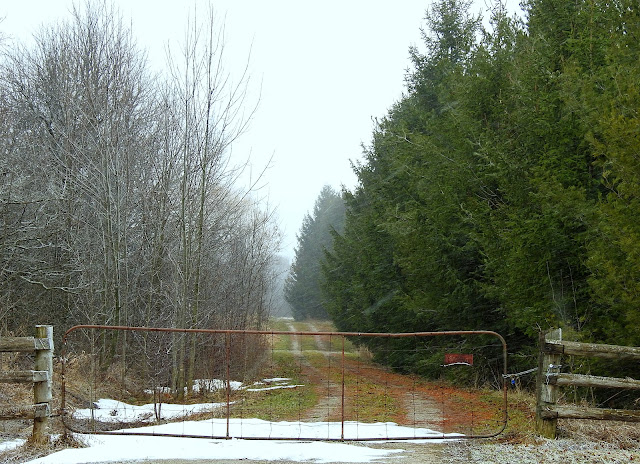 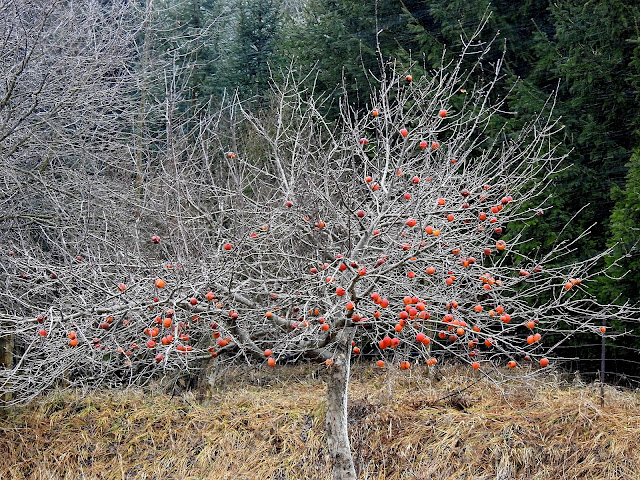 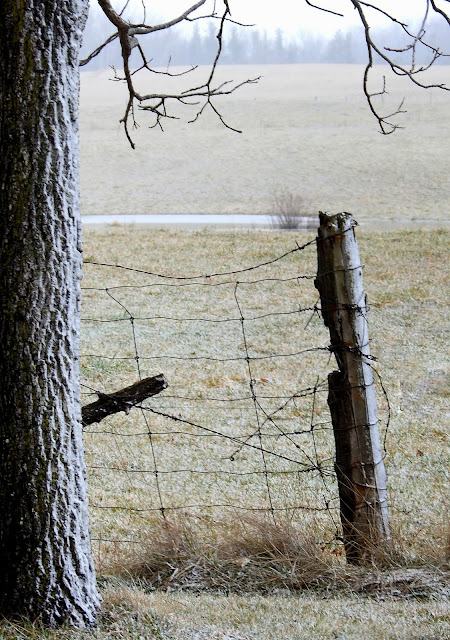 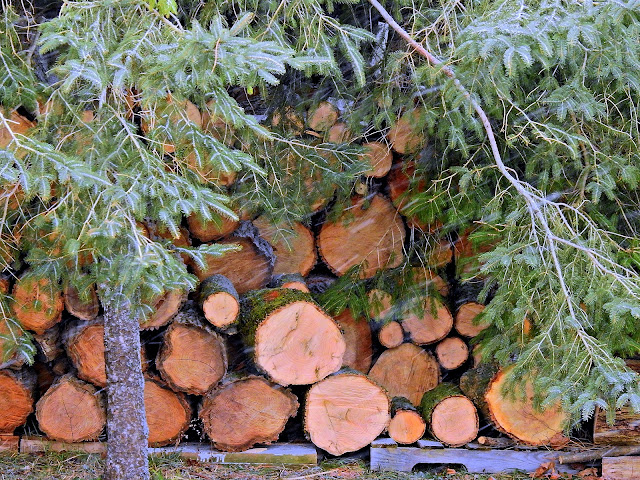 Our afternoon walk around the Park's pond was cut short by an icy northeast wind and aside from topping up the bird feeders, I spent most of the day inside reading. 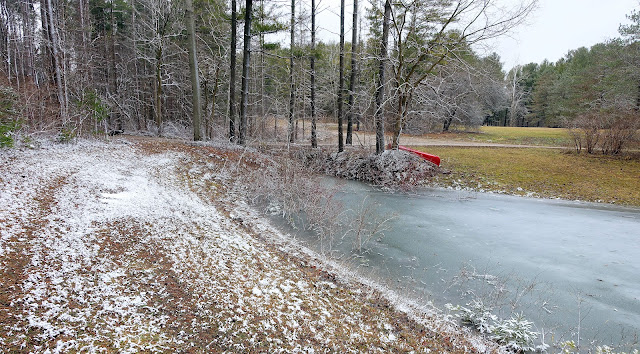 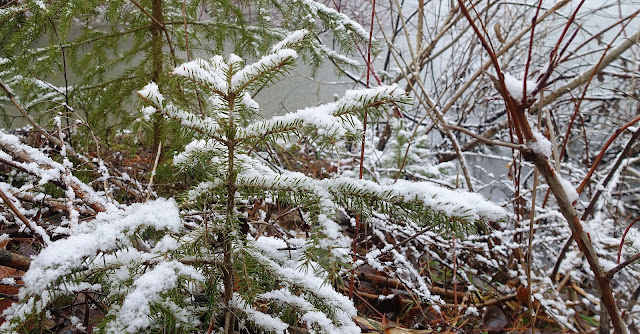 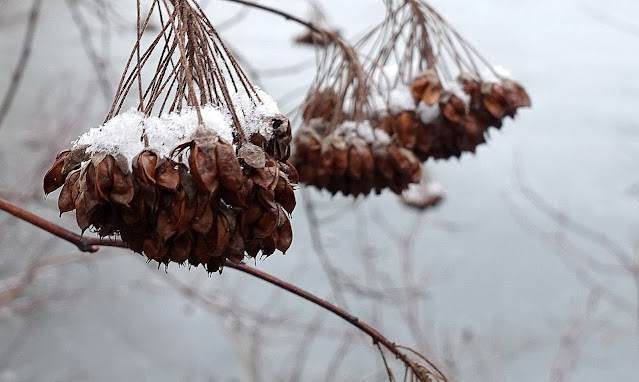 As rare as it is for Kelly and I to go out for supper anymore, tonight was the night that out we did go.  Renegades Diner, located in Bayfield's south end has a Friday special of Fish&Chips so we fired up Subie and headed into town.  Had we known the fish sizes were so big we would have ordered the one-piece instead of two-piece dinners.  But, big they were with lots of batter on the fish just the way I like it.  Amazingly enough, I ate both pieces and I liked the fries too.  Two thumbs up for Renegades Fish&Chips. 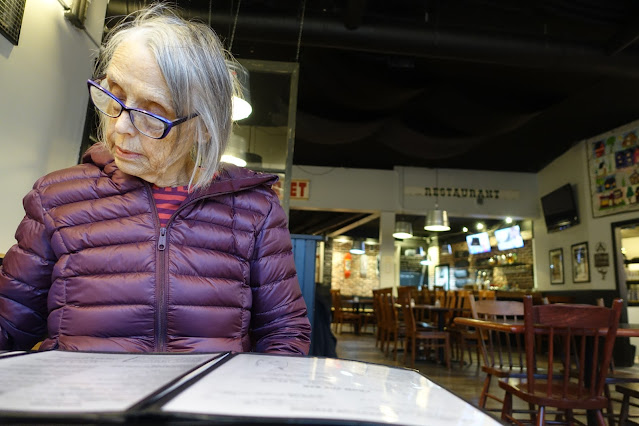 GROANER'S CORNER:((  Farmer Joe decided his injuries from the accident were serious enough to take the trucking company, responsible for the accident, to court. In court, the trucking company's fancy lawyer was questioning FarmerJoe. "Didn't you say, 'I'm fine', at the scene of the accident?" asked the lawyer.  Farmer Joe responded, "Well, I'll tell you what happened. I had just loaded my favorite mule Bessie into the..."  "I didn't ask for a long, drawn-out story," the lawyer interrupted, "just answer the question. Did you not say, at the scene of the accident, 'I'm fine'!"  Farmer Joe said, "Well, I had just got Bessie into the trailer and I was driving down the road..."  The lawyer interrupted again and said, "Judge, I am trying to establish the fact that, at the scene of the accident, this man told the highway patrolman on the scene that he was just fine. Now, several weeks after the accident, he is trying to sue my client. I believe he is a fraud.  Please tell him to simply answer the question."  By this time the Judge was fairly interested in Farmer Joe's answer and said to the lawyer, "I'd like to hear what he has to say about his favorite mule Bessie."  Joe thanked the Judge and proceeded, "Well, as I was saying, I had just loaded Bessie, my favorite mule, into the trailer and was driving her down the highway when this huge semi-truck and trailer ran the stop sign and smacked my truck right in the side."  He continued, "I was thrown into one ditch and Bessie was thrown into the other. I was hurting real bad and didn't want to move. However, I could hear ole Bessie moaning and groaning. I knew she was in terrible shape just by her groans.  Shortly after the accident, a Highway Patrolman came on the scene. He could hear Bessie moaning and groaning so he went over to her. After he looked at her, he took out his gun and shot her. Then, he came across the road with his gun in his hand, looked at me, and said, 'Your mule was in such bad shape I had to shoot her. How are you feeling?'

Both my wife and I are bad cooks.  Our cooking is so bad, that our kids have started praying after we've had dinner. 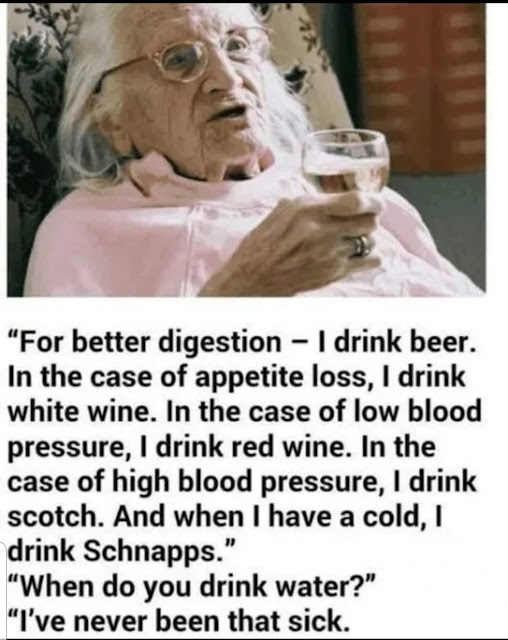 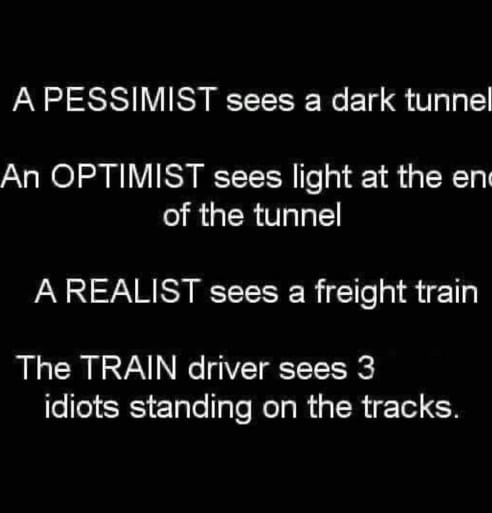