ANOTHER WINTER STORM IS/WAS UPON US 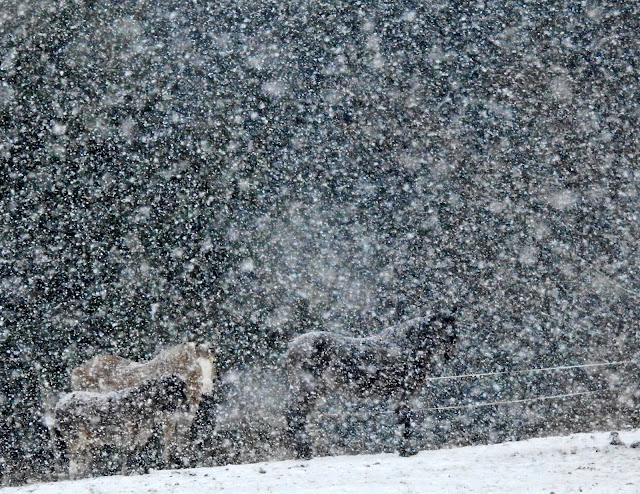 The northern edge of the Texas weather front gently rolled into our area shortly after 8 a.m. this morning bringing with it colder temperatures, icy east winds, and light snow flurries.  As the day progressed so did the intensity of the snowfall.  Update::  At the time of posting tonight, the snow has stopped and the short-lived winter storm has already moved off to the northeast leaving us with about four inches of snow on the ground:)) 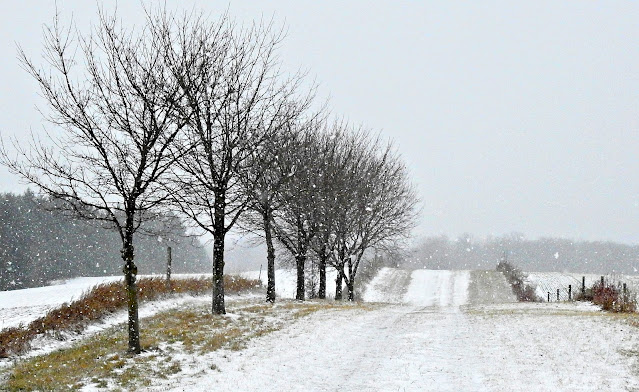 Undaunted, Pheebs and I slipped off out into the countryside looking for a few photos and enjoying the snowy air.  Back to Bayfield, we wrapped up our Jeep ride with a walk in the wind-sheltered Bayfield Cemetery and a stop at the Porter's Hill Wild Bird Seed Company where we picked up a couple more 20-pound bags of Delux-Mix birdseed.  For anyone in our area, be sure to drop in here and have a look at all the different types of bird seed as well as a great assortment of bird feeders and all the accessories that go along with feeding birds.  Steve, the owner is knowledgeable about all the wild and wonderful birds we have in this region of Ontario.  He saw a number of Robins a few days ago hanging out around the southeast outskirts of Bayfield.  Pheebs and I will have to slip out that way and see if we can spot a few. 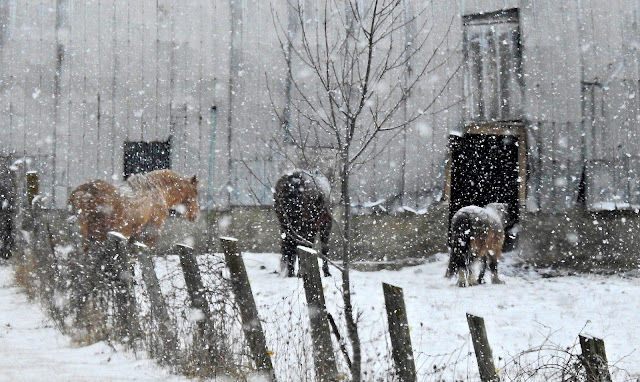 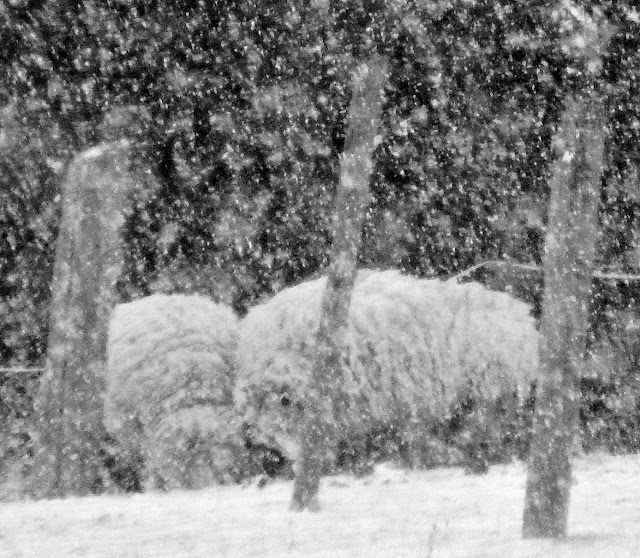 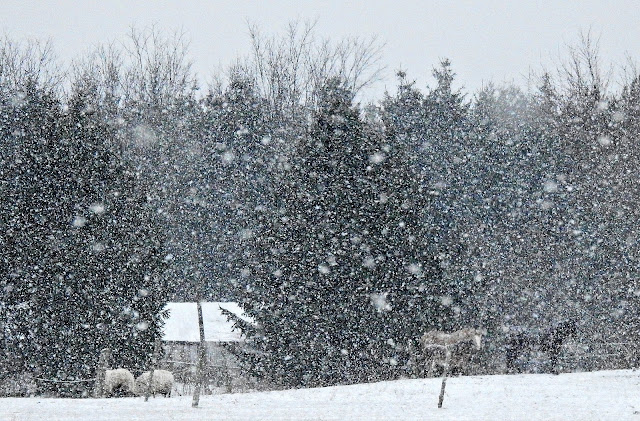 With a wind chill factor outside of 21F, I spent the rest of the day inside.  No afternoon walk.  The birds and squirrels outside our sunroom windows always keep me entertained with their antics.  There has not been a squirrel on our bird feeder now for about 6 weeks.  That seems impossible, but it's true......as I sit here with a big apprehensive Cheshire Cat grin on my face:)) 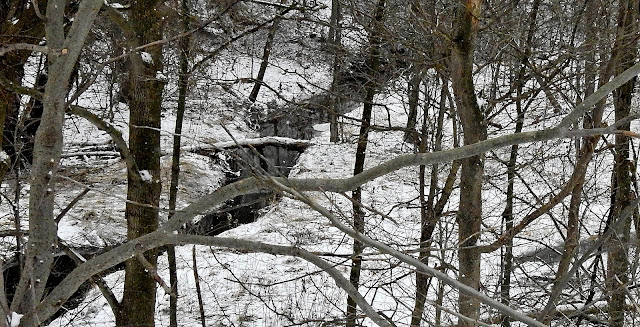 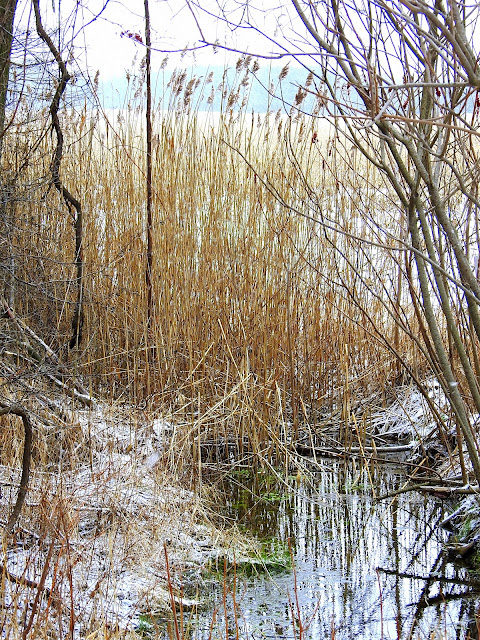 I am really enjoying John Steinbeck's Travels With Charley in Search of America.  On his 1960 journey, he almost made it into Canada but was not encouraged to cross the Niagara Falls border point because his traveling dog companion Charley didn't have a rabies shot.  In Niagara Falls to see the massive tumbling of water, he had hoped to cross the border here and head north to Hamilton and then west to Detroit in hopes of shaving a few miles off his journey.  The Canadian border officials would have let him into Canada but explained to him that he would not be able to get back into the States without Charley's rabies shot certificate.  Rather than try to find a vet he decided to stay in the States and struck off for Erie New York with the idea of following along the southern shores of Lake Ontario, which he did.  By the way, he had nothing but praise for how the Canadian border guards treated him.  And no, they did not know they were talking to John Steinbeck, one of the most prolific, honored, and revered writers America has ever seen. (The Grapes of Wrath, East of Eden, Tortilla Flat, The Winter of our Discontent, and Of Mice and Men, just to name a few of his books) 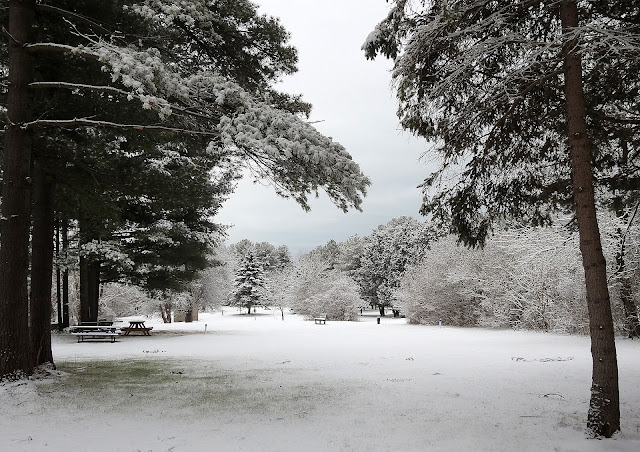 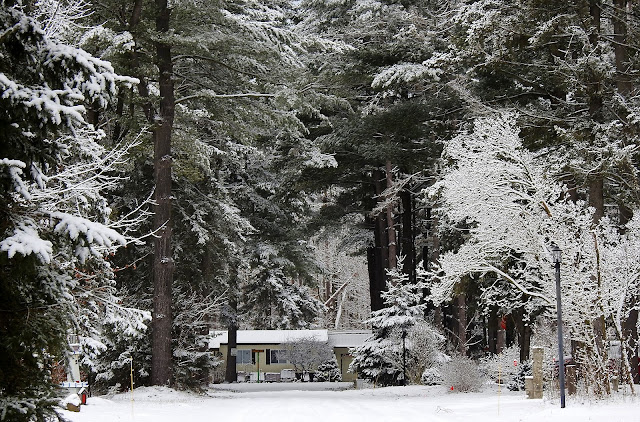 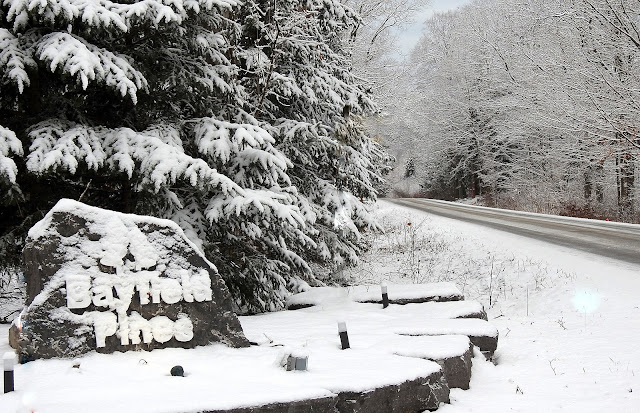 Seven years ago today we were hanging out in the desert just west of Yuma Arizona.  For a change of pace this day we headed into Yuma and each caught ourselves a separate movie at the Yuma Palms Mall movie theater.  In this post I also posted the remaining photos from the last Bloggerfest we attended in Quartzsite Arizona just a few days before.  It Was A His And Hers Movie Day In Yuma Arizona. Ellen's Groove:)) I can't remember if I posted this one before but it's a video of Ellen and her dad doing a short version of a longer version duet to come.  Short Version.  For those who don't know, Ellen's dad is a wiz on guitar and belongs to a top-notch group of players who call themselves Octavision.  Well-known and respected bassist and 5 time Grammy winner Victor Wooten is a member of this band and as a family friend has also helped Ellen out with a few bass guitar tips.  By the way, ten-year-old Ellen and her family live in Las Vegas, Nevada. 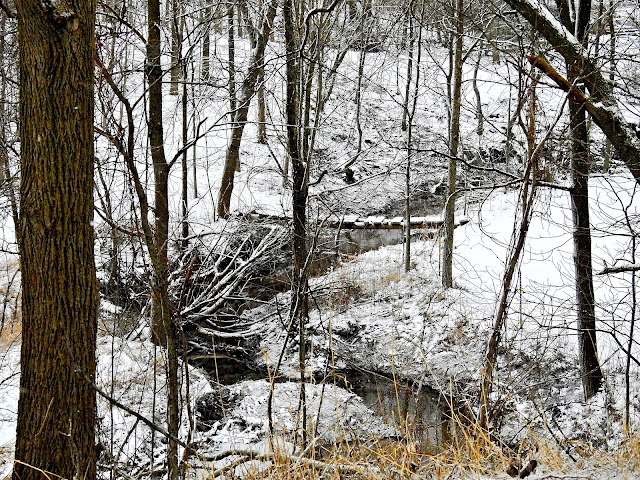 GROANER'S CORNER:(( A minister told his congregation, "Next week I plan to preach about the sin of lying. To help you understand my sermon, I want you all to read Mark 17."  The following Sunday, as he prepared to deliver his sermon, the minister asked for a show of hands. He wanted to know how many had read Mark 17.  Every hand went up.  The minister smiled and said, "Mark has only sixteen chapters. I will now proceed with my sermon on the sin of lying."

How can you tell if a redneck is married?There are chewing tobacco stains on BOTH sides of his pickup truck. 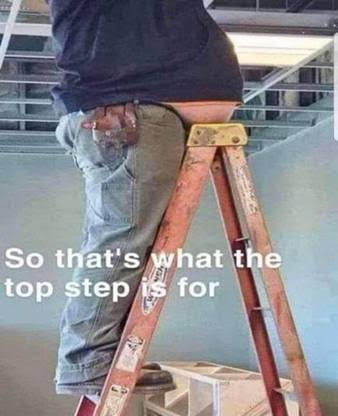 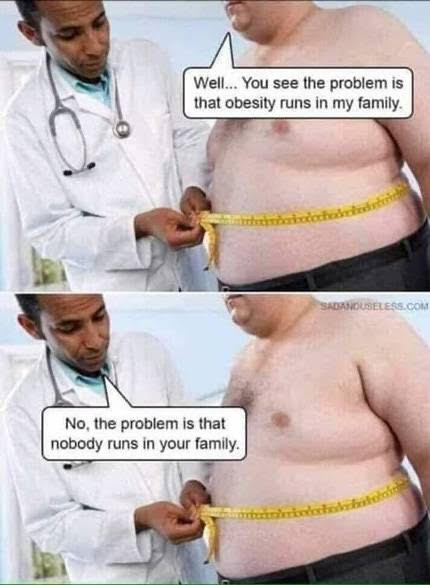 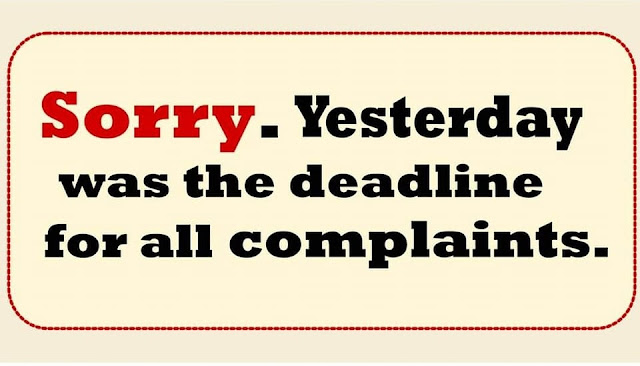