This is a rather long blog because it covers both Saturday and Sunday. 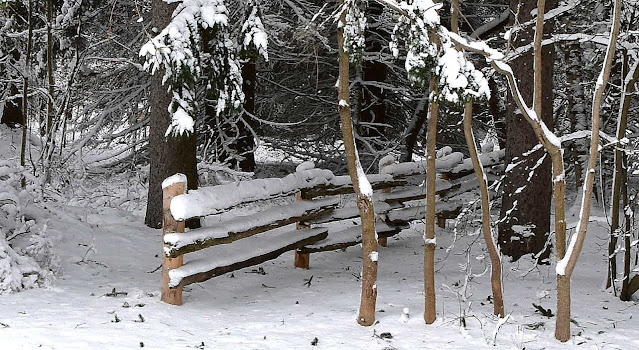 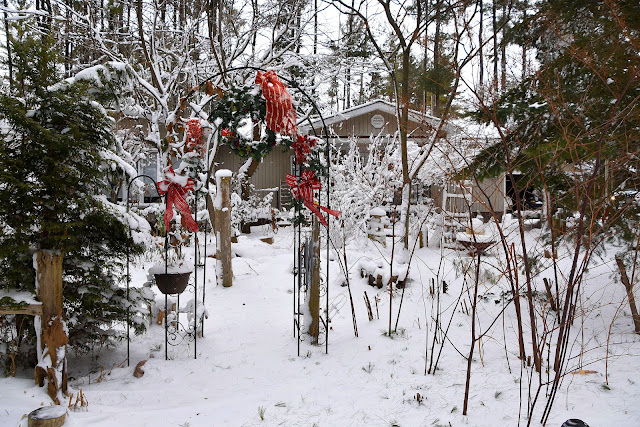 Friday, Dec 23rd. With a pop, fizzle, and a clunk, our power went out Friday night at 7:20 p.m.  And that was that, we were in total darkness with howling winds and blowing snow outside our windows. Minutes later, with a couple flashlights we lit some candles and two oil lamps.  Kelly's cell phone still worked so she called the Power Company for an update.  They said power would be restored by 10 p.m. but we highly doubted that.  The next update said 1 p.m. on Saturday and then 5 p.m. Saturday.  The writing was on the wall, we were in for a long night and maybe even a couple days.  We settled in for the long haul. Luckily, we have a gas stove in the sunroom so we had a source of heat.  Without power, the fan wouldn't work but that was okay, it was good enough.  And of course, we had the RV outside for backup.  Kelly slept in her bed for the night and I stretched out in my sunroom recliner beside the gas stove. Kelly's sleep was so-so and I slept fine. Pheebs slept on her doggy bed in front of the gas stove beside my chair. 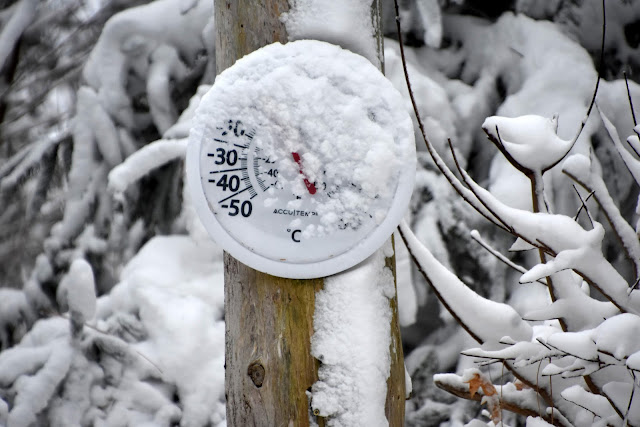 Saturday, Dec. 24th.  Awake at 6 a.m. I figured I might as well get up and fire up my snow shovel. It had stopped snowing but the high winds were blowing our pine trees around like a bunch of flapping noodles.  Re-lit our lanterns, dressed up good and warm, then headed outside.  I first shoveled a path to the motorhome which I then started up and with its running lights lighting up the driveway and front yard I commenced shoveling a path to our birdfeeders and was able to top up the feeders before the feathered gang flew in for breakfast.  Shoveled a path to our road and widened the path to the motorhome.  Kelly was up about an hour later so I started Scooter's generator while she readied our main coffee percolator.  I carried the perk out to the rig and plugged it in. Ten minutes later we had had hot morning coffees. 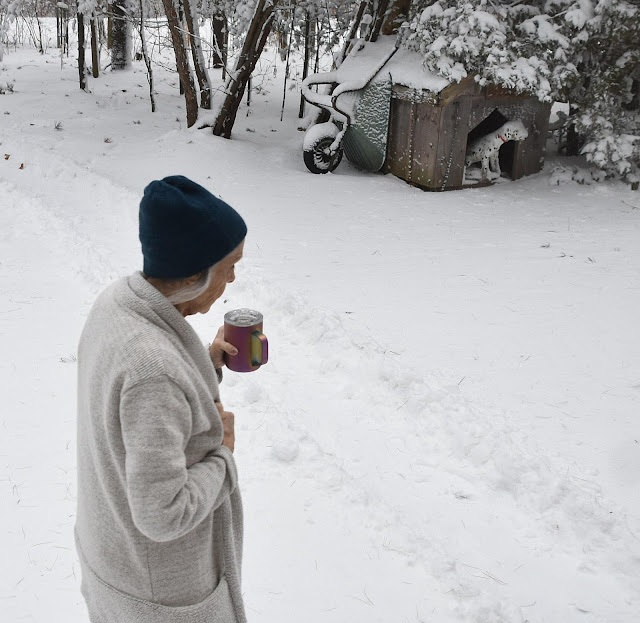 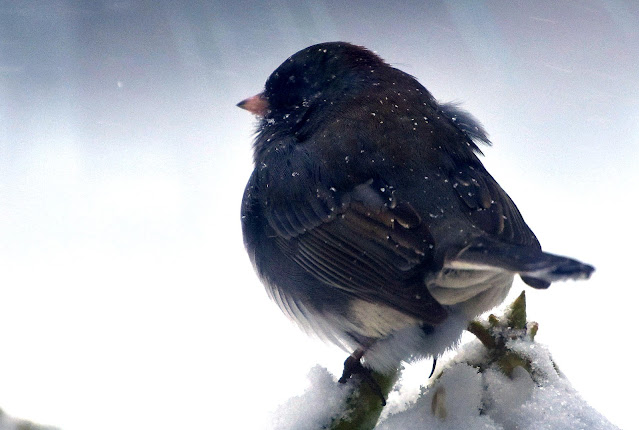 Finding the house holding steady at 55F we decided to spend our day in the sunroom rather than the motorhome.  I felt it priority to conserve the rig's propane in case the power outage was going to be a long one.  Besides, our little gas stove in the house was doing a great job.  If we needed to cook anything or make coffee etc. we could slip out to the rig and fire up the generator.   Sure glad now we didn't sell our little Class C Winnebago Itasca Spirit.
10 a.m. We have a battery-operated/hand crank emergency radio so we can listen to local news station weather reports and conditions. Snowplows had been pulled off the roads Thursday night so all area roads were plugged with snow and nothing was moving.  No snowplows, power company trucks, ambulances, or firetrucks moving.  Trains were stopped and airplanes grounded.  We stuck close to our sunroom's gas stove and watched all the birds in our front yard. 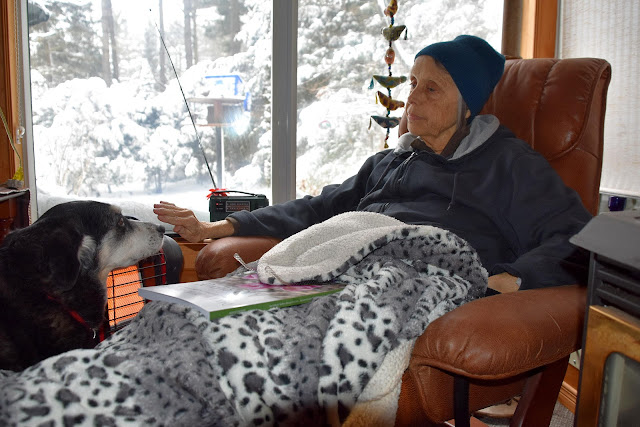 12:15 p.m.Shortly after noon I headed out to the rig with my coffee pot and brewed up a cup of decaf, heated up a small container of soup for Kelly in the microwave, and plugged my Kindle charger in.  Because we have a smaller propane tank on this rig I was hesitant to fire up the rig's furnace because we do not know how long this power outage is going to last. It could easily be another day or two because with today's high winds blowing all the loose snow around, Ontario Hydro may still not be able to get their trucks and crews on the road to repair all the damaged power lines.
2 p.m. Being curious to know what was happening outside our Park I cranked up the Jeep and headed out the driveway and was pleased to see that Bayfield River Road running past our Park had been plowed. Our Park roads had not been plowed.  Decided to head for Bayfield and see how it went.  No problems as I found all roads were open.  I also noticed the power was on in Bayfield.  The Bayfield Garage was open as well as the Foodland Supermarket.  Tim Hortons and the gas bar were closed.  A few shops in Bayfield were open but most were closed.
6 p.m.  I took a drive around our Park and saw three large pine trees down.  One completely blocked one of the Park's roads and another down across a driveway missing a parked car by mere inches.  Some places were lit because the owners had generators.  Using the rig's generator we charged up Kelly's phone and my Kindle.  We spent Christmas Eve in our sunroom.  The kitchen and living room temperature was 45F but in the sunroom we had it up to nearly 70F.  The last thing I said to Kelly before she headed to bed was, "Merry Christmas Ma'.  She answered me with two words, "Ahhhh Humbug':)) 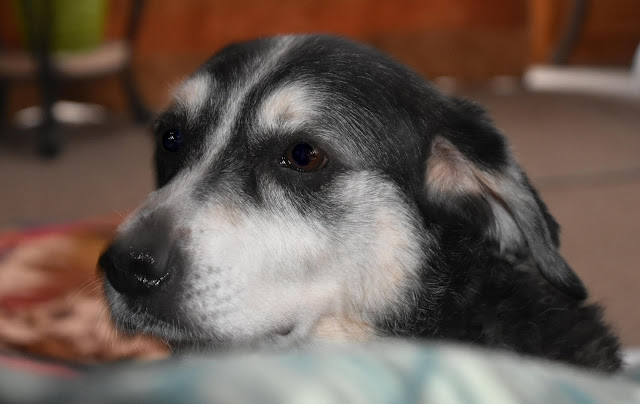 Sunday, Dec. 25th. 7 a.m.  Still dark out but I could see it was brightening in the east.  Thankfully we didn't get any more snow during the night and the winds were much diminished from the previous couple of days.  I slipped out to the motorhome and fired it up and followed that with topping up the bird feeders.  By the looks of it, I am going to have to get a whole dumptruck load of birdseed brought in.  Those feathery guys sure have monstrous appetites.  My Kindle had been showing 'low battery' so with a 75-watt inverter plugged into the Winnebagos dash I began charging it.  Kelly was up an hour later and the rig was all warmed up for her as we settled into our morning coffee routine. It was bout 9:30 when we decided to fire up the Subaru and take a drive around our Park to see how folks were faring.  We noticed at least half a dozen people had their vehicles running and were in the process of probably heading into Bayfield.  I took pictures of the trees down in our Park and then we headed into Bayfield ourselves to have a look around. 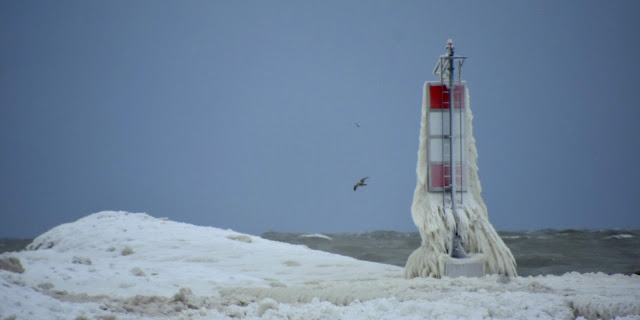 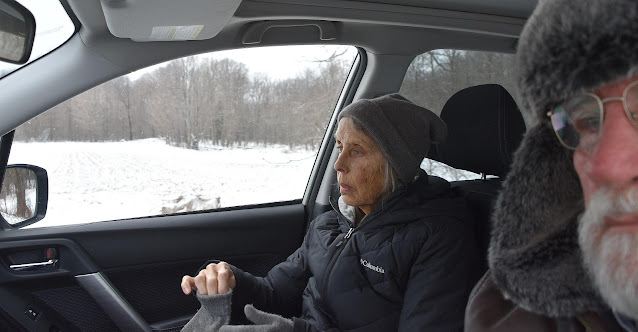 Being Christmas morning everything was closed except the post office/convenience store and the Foodland Supermarket with a number of cars in the parking lot.  At the convenience store, gas pump people were lined up filling gas cans for their at-home generators.  Kelly called Ontario Hydro when we got home and their estimated time for repairs to our area was 5 p.m. later today. Where have we heard that before but we know the crews are out there in all this terribly cold and blowing weather doing the absolute best job they can.  I figure there must be one whole heck of a lot of damage to power lines somewhere. 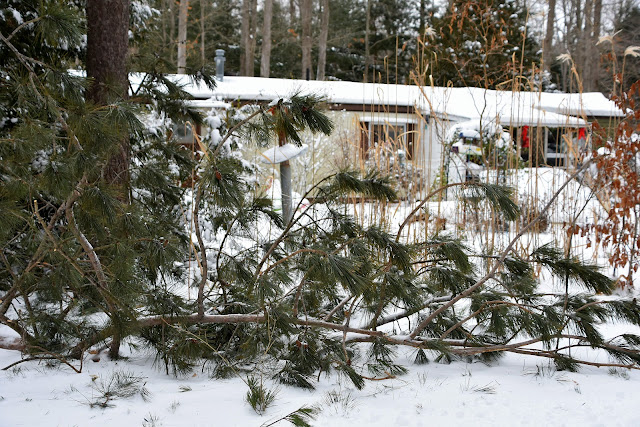 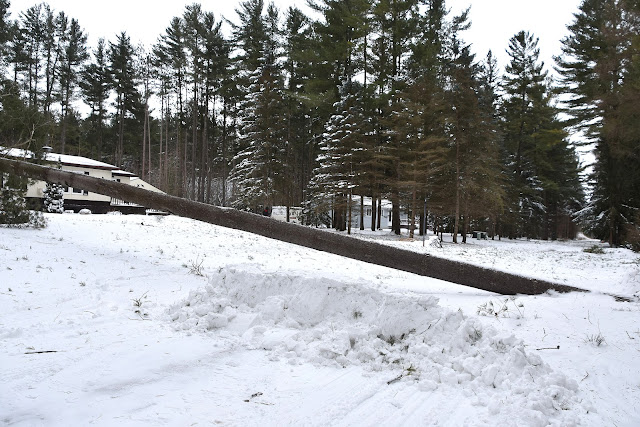 It's 11:50 a.m. as I type this in the warm and toasty motorhome.  It's a good thing I topped up the rig's gas tank a few days ago.  Kelly chose to stay in the sunroom beside our warm gas stove.  Pheebs stayed with mom.  We thought we saw police in the Park this morning but we're not sure.  They may have been doing door-to-door wellness checks because this is a Senior's Park.  From the motorhome I saw them walk past our house so I figure they must have looked in and decided we were well enough:))  I had come back into the house and we were both in the living room reading.  Kelly got up to get something in her bedroom when I heard an odd sound beside me.  The fan came on in our gas stove.  Before I could figure it out I saw our antique lamp flicker and shouted to Kelly, 'The powers on:)))))))))))  I immediately checked the clock and it was exactly 1 p.m.  Anyone who has ever been without power will well know the feeling of jubilation when power is restored.  Kelly said if she was ever reincarnated she would not like to come back before the invention of electricity. 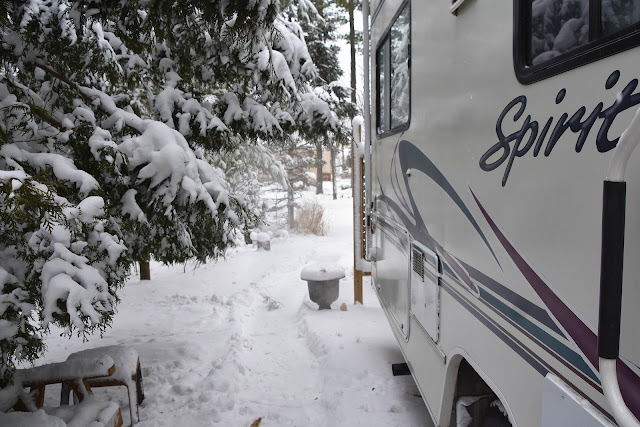 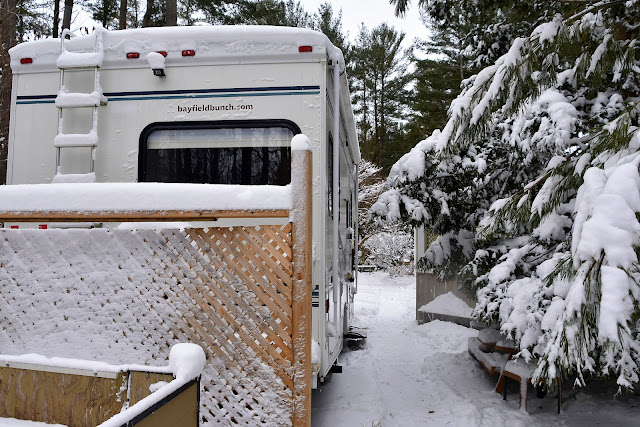 The rest of the day was spent cleaning up and getting ourselves reorganized back to our normally comfortable routines.  Music again, the Internet again, TV again, heat again, lights, water, and hot water again, landline phone again etc. and etc.  I have more I could say but I'm just too darned tired to even think about saying more.  Goodnight........zzzzzzzzzzzzzzzzzzzz:)) 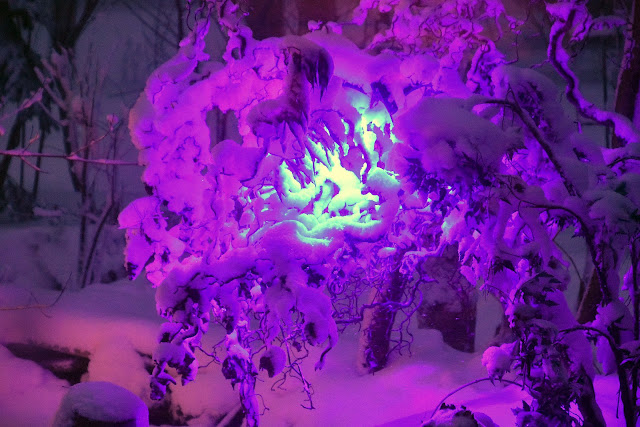 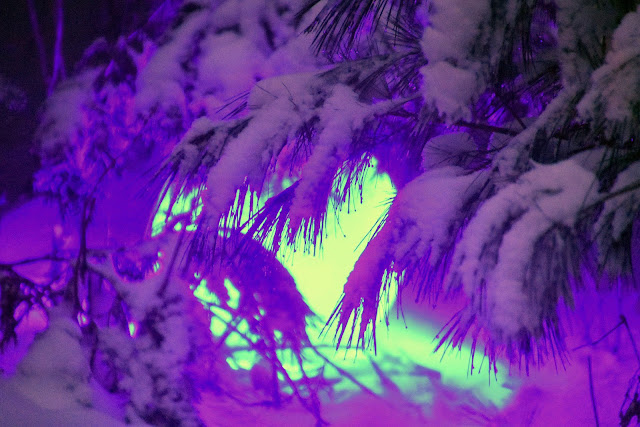 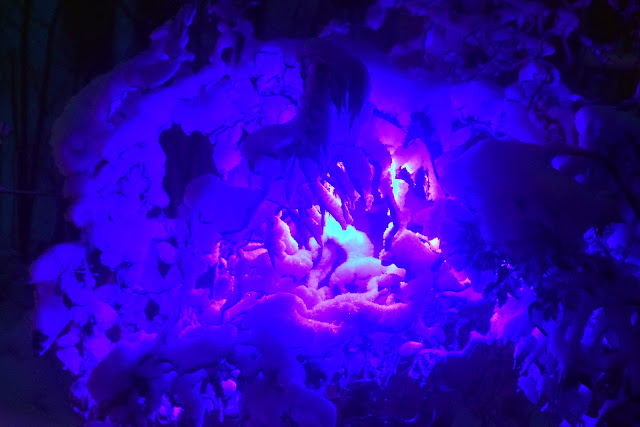 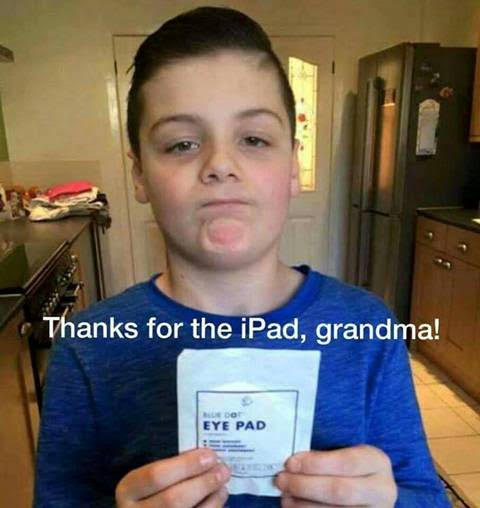