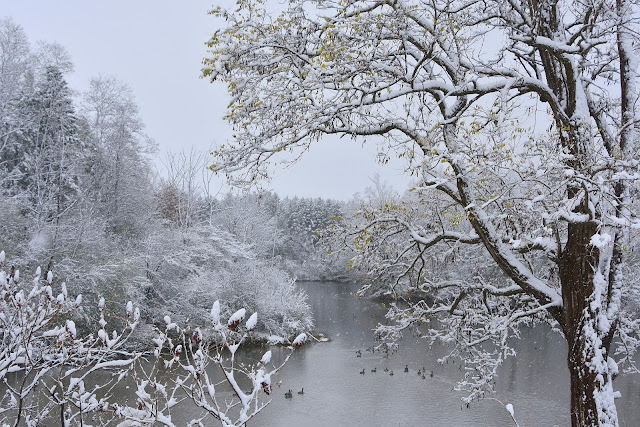 I had a feeling we would wake up to a white landscape this morning and that feeling bore true.  In fact, snow fell right on through most of the day. 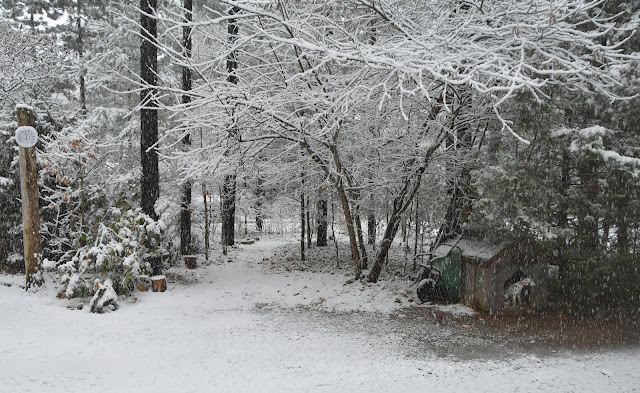 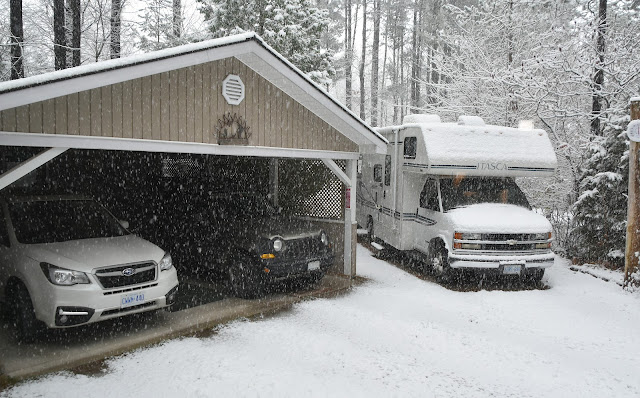 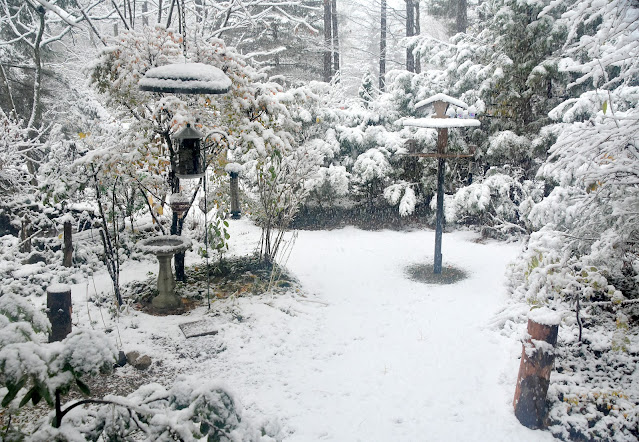 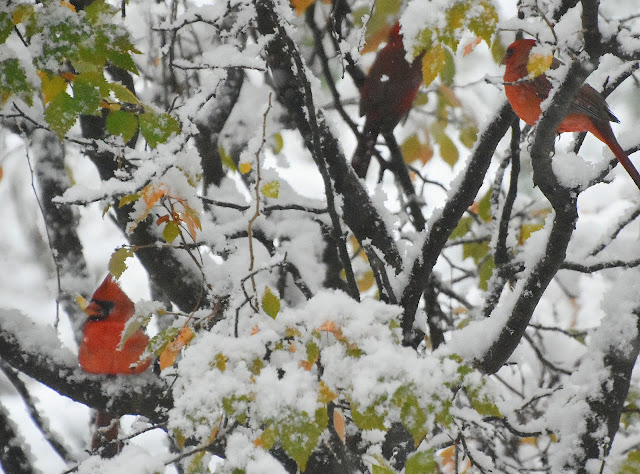 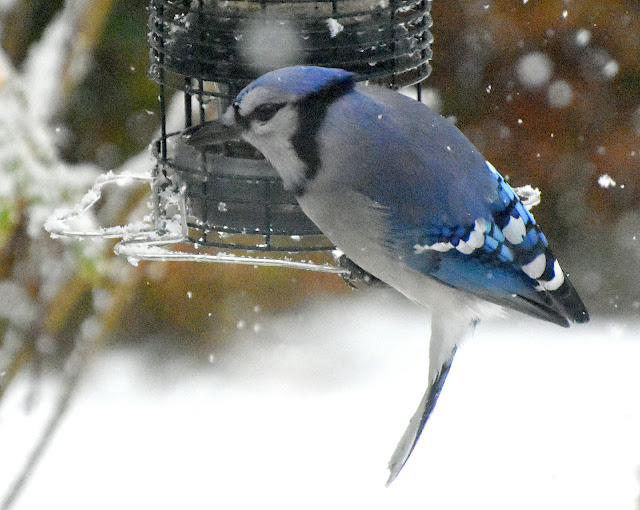 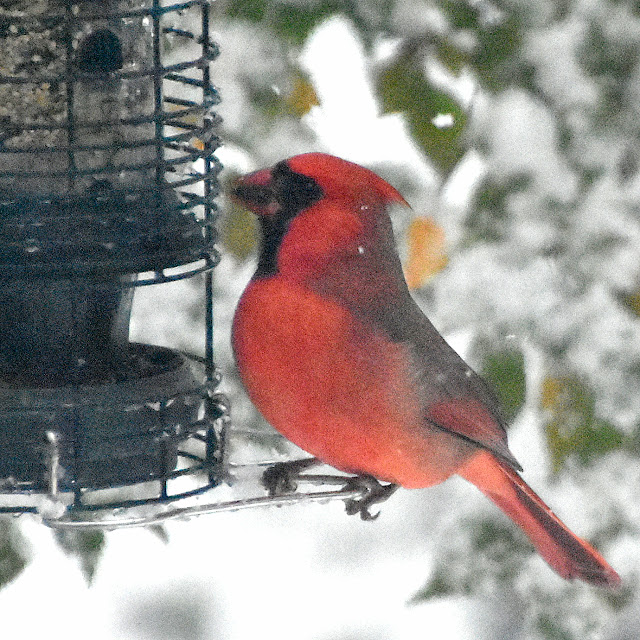 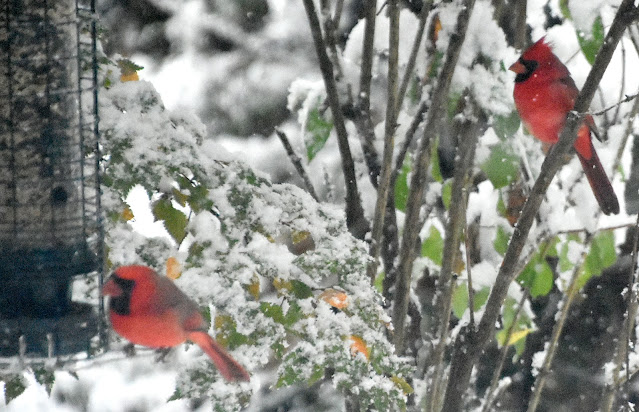 Before hitting the road, Pheebs and I took a slow drive around a few streets in our Park to see if we could find a few winterscape photos. 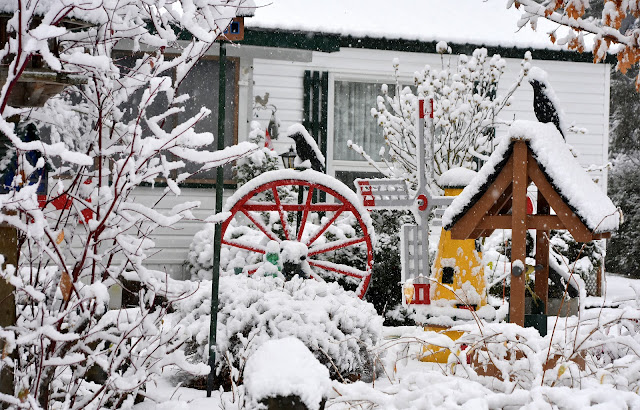 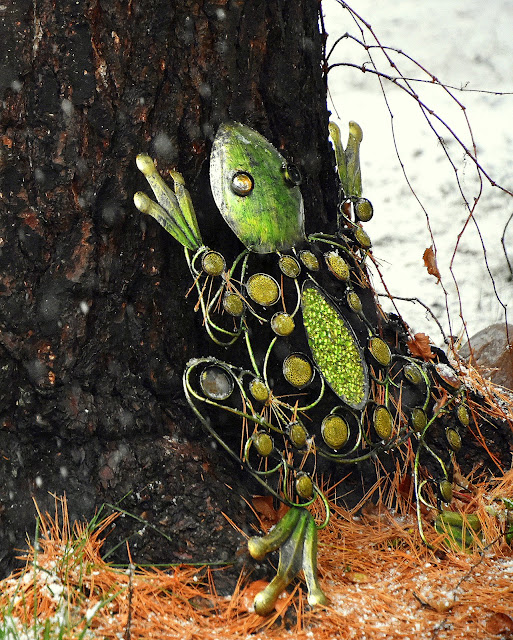 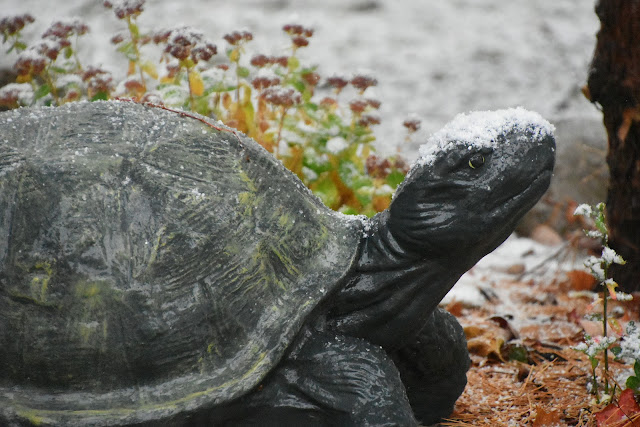 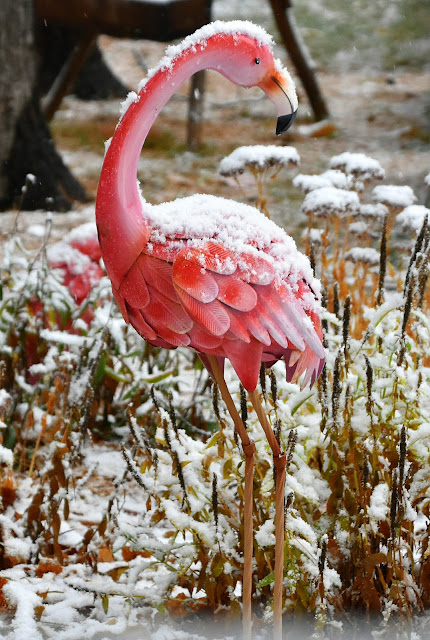 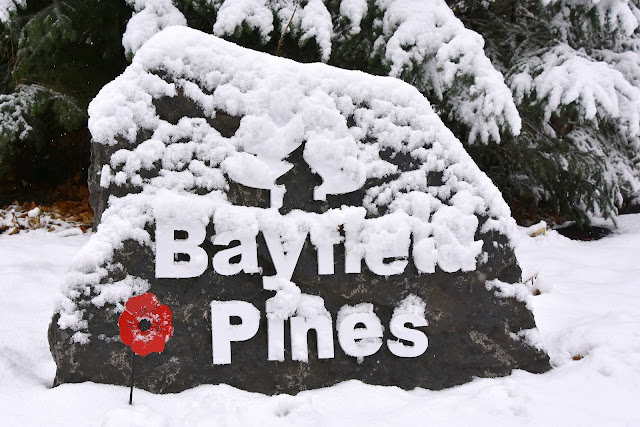 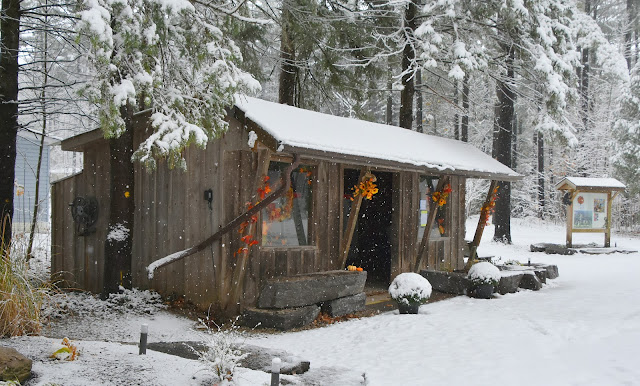 Heading out of the Park it was snowing heavily for a short time as we headed east down Bayfield River Road.  Not many tire tracks in the snow but of course, Sunday is always a quiet day out and about on our area roads.  We didn't go too far this morning before turning around and heading home again.  It was time to fire up my snow shovel. 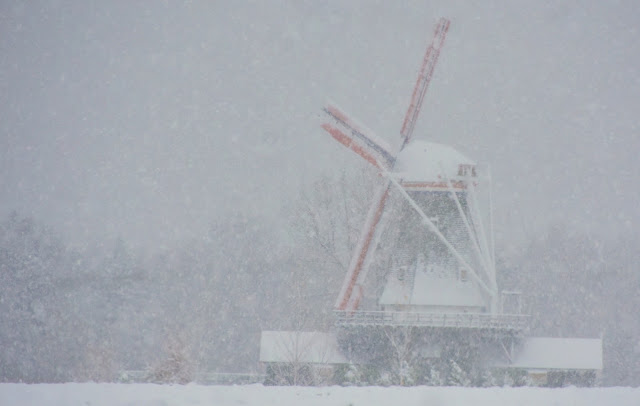 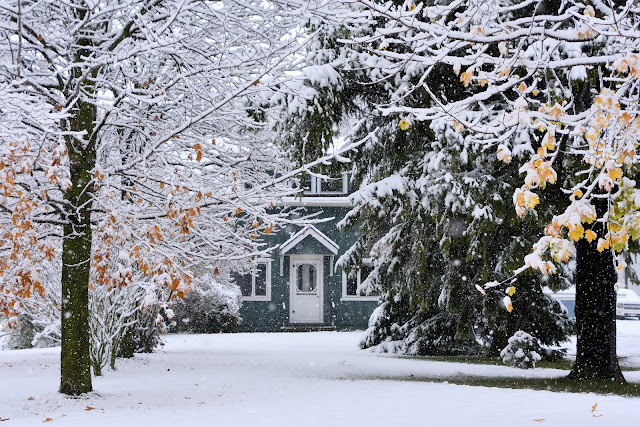 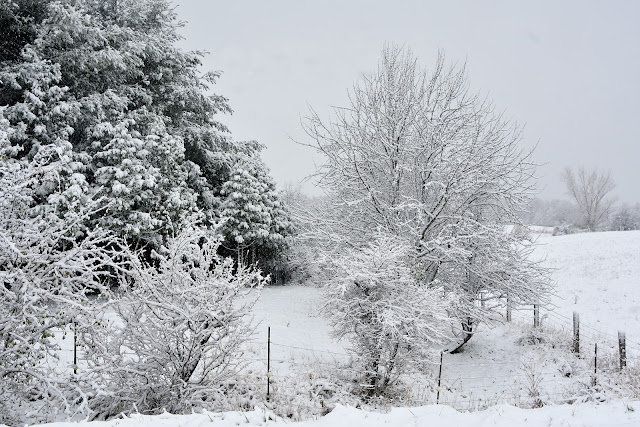 With only an inch or two of wet snow on the ground, it didn't take me long to do a little shoveling.  It was kind of a practice run for what is to come over the next four months or so. 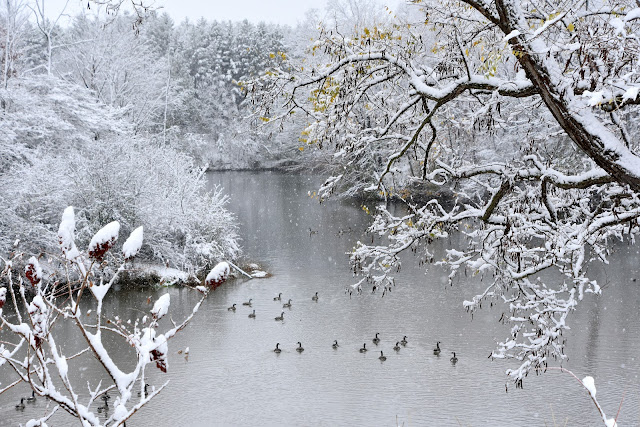 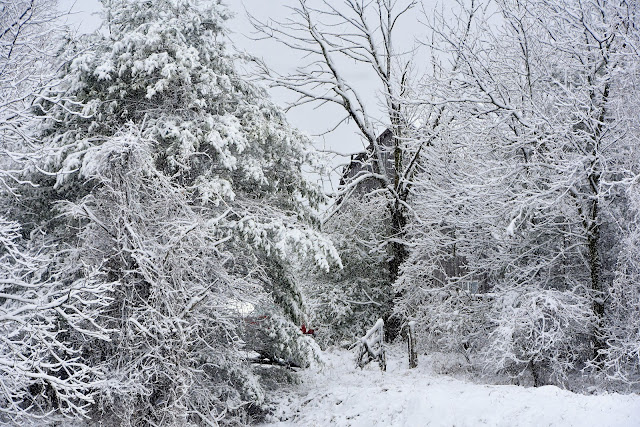 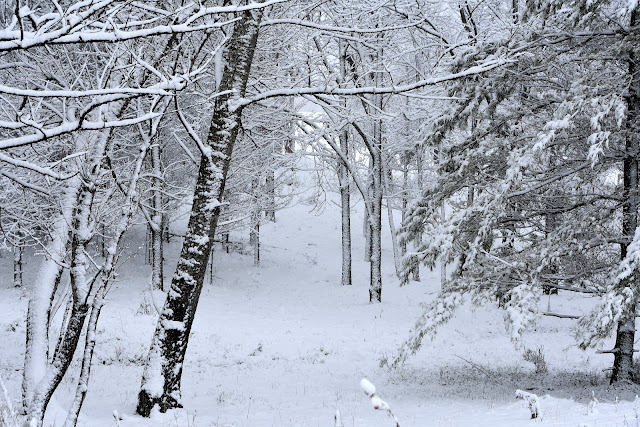 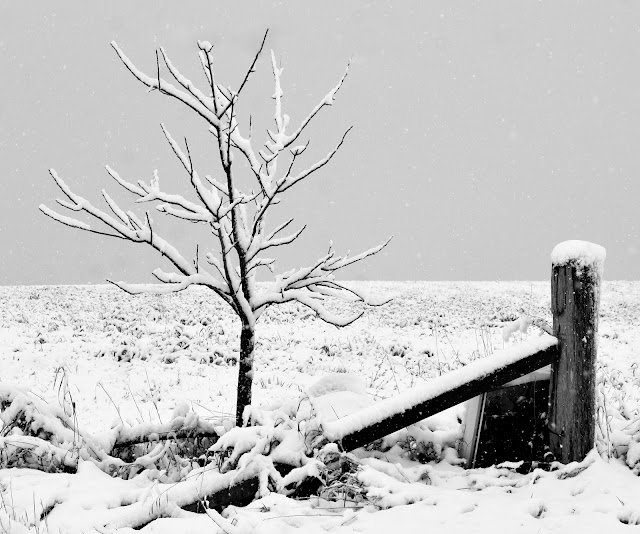 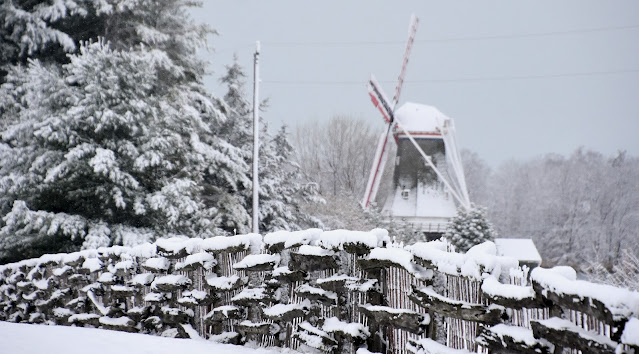 The bird feeders have been working overtime as Cardinals, Blue Jays, Woodpeckers, Black Cap Chickadees, and Juncos dominate the feeders in our snowy front yard.  Also dominating are the black squirrels which I am currently engaged with in a running battle.  One in particular absolutely flings himself off a nearby tall cedar tree and sky-dives itself right down onto the top of the bird station.  I've put up various defenses but he has knocked them all down.  The basic problem has now reached a stage that may be unsolvable.  A nearby cedar tree has grown to a point where its branches extend outward towards the flat platformed bird feeding station.  The branch the Squirrel is flinging itself from is too high for me to reach with a ladder to cut the branch back.  So, I am finally all out of defenses.  Once a squirrel gains access to a feeder there is no point in putting any more birdseed in it or on it:((  Today I finished the second book of Lucy Maude Montgomery's Anne Of Green Gables.  I liked 'Anne Of Avonlea' every bit as much as the first book and am now onto book three entitled, 'Anne Of The Island'.  Here are the eight books in the collection with the ages of Anne each book covers. 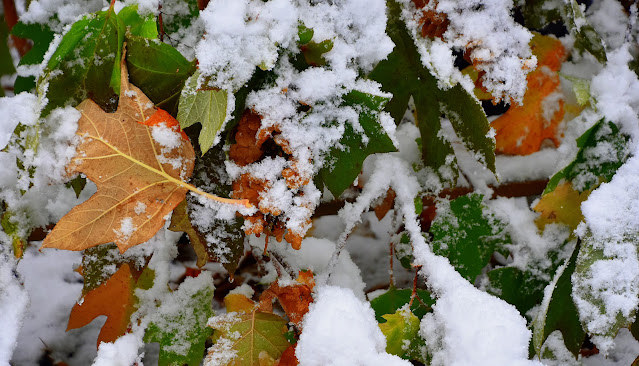 GROANER'S CORNER:(( A father spoke to his son, "It's time we had a little talk, my son. Soon, you will have urges and feelings you've never had before. Your heart will pound & your hands will sweat. You'll be preoccupied and won't be able to think of anything else."  He added, "But don't worry, it's perfectly normal... it's called golf." 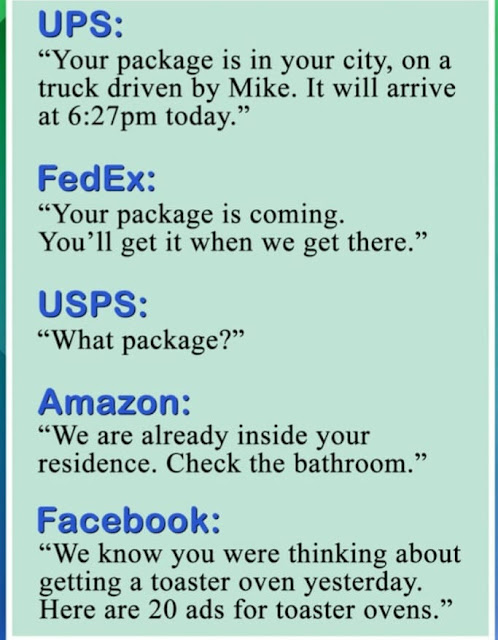