For the second morning in a row, Pheebs and I headed straightaway for the Bayfield car wash, except this time we had the Jeep instead of the Subaru.  I had a 10:30 a.m. appointment to have the Jeep undercoated at Goderich's Canadian Tire Store and I wanted to make sure I had the wheel wells and undercarriage of the Jeep free and clean of any mud or road salt and the best way to do that was with the pressure hose at the car wash.Dropping Pheebs off at home I soon headed to Goderich and arrived fifteen minutes early whereupon they took the Jeep right in.  Hung out in the waiting area reading my kindle and thirty-five minutes later I saw a young fella washing the Jeep outside.  Minutes after that I was good to go and subsequently pleased with the undercoating job they had done.  A quick stop at Walmart and the nearby Shell gas bar were next.  And it was at the gas bar a fellow there walked by the window with the words, 'Pheebs is going to the Vet today'.  Well, that caught me by surprise as I muddled my way through the credit card procedure but before leaving I was able to quickly thank him for being a blog reader:)) 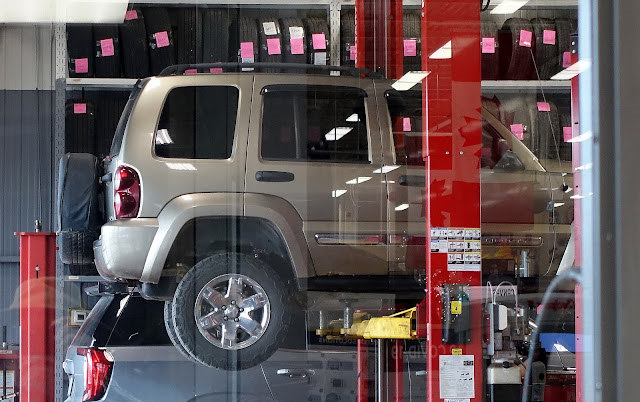 Home again it wasn't too long before Kelly, Pheebs, and I were in the Jeep heading to Zurich's South Huron's Vet Clinic.  We were on time and Dr. Earl took Pheebs in ten minutes later to treat her Aural Hematoma.  Twenty minutes later she was back with a much better-looking ear and none the worse for wear.  The sack of blood and serum in Pheeb's right ear had been drained out with a needle and a steroid was inserted.  If the ear fills up with blood again we will have to take her back Thursday and see where we go from there.  Home now, she is feeling fine and having some big snoozes.  Oh, that first photo....I caught Pheebs having a big yawn:))In the Anne of Green Gables series, I have finished the third of eight books....'Anne of the Island'.  I am now into book four....'Anne's House of Dreams'.   GROANER'S CORNER:((  A father of six children had been out of work for six months. In desperation, he was reading through the want ads in the paper and came across an ad for someone to work at the zoo. The man called the zoo and asked if he could have the job, but was told that he would need to come in for an interview.  The next day he went to the interview, but before beginning, he was told by his potential employer that he would need to raise his hand and promise that the proceedings of the interview would be kept confidential, whether he got the job or not. The man reluctantly took the oath, then asked what this job and oath were all about.  The zoo owner asked the man what he thought the zoo's main attraction was. Without hesitation, the man replied, 'Everyone knows that. It's the big ape!'  'Well,' said the zoo owner, 'this is the part you cannot divulge, because we would lose our business. The big ape died, and we need to keep it a secret by putting the ape skin on someone who can imitate the ape--at least until the new ape arrives in three months.' 'That's me!' said the man. 'I can do that! I was a gymnast in high school and college.' The zoo owner then challenged the man to audition by acting like an ape. The man assumed a crouched position and began running, jumping, and swinging around the room, imitating the actions and sounds of an ape. 'Wow! You're really good!' said the owner, and immediately gave the man the job.  The next day the man, dressed as the ape, went into the cage and was an instant hit. Everyone heard how the ape was performing and came to the zoo to see him. The crowds got bigger and bigger as time went by, and the front page of the paper proclaimed, 'The ape has gone ape!'  About two months before the new ape was to arrive, the man had about five hundred people in front of his cage, and he was really putting on a star performance. He was flipping and jumping and swinging everywhere, when all of a sudden, at the top of a swing, his rope broke and threw him into the lion's cage. He rolled a few times, coming to rest against the bars, and turned to find himself across the cage from the king of beasts, who lay across the cage with his head down on one paw. He knew right away that he was in trouble, so he began screaming like an ape and running back and forth along the bars in hopes that someone would rescue him from this situation. No one moved. As he looked again, the lion began to move slowly and stalk him. The lion then growled, curled his upper lip over his teeth, and assumed a position to leap. Just at this moment, the man decided that his family was more important to him than his promise to the owner of the zoo. He looked up and started screaming, 'Help! Help! I'm not really an ape, I'm a man. Get me out of here!' The lion looked at him and said in a loud whisper, 'Hush up, you fool! You'll get us both fired!'