A FEW CREEKS ALONG THE WAY 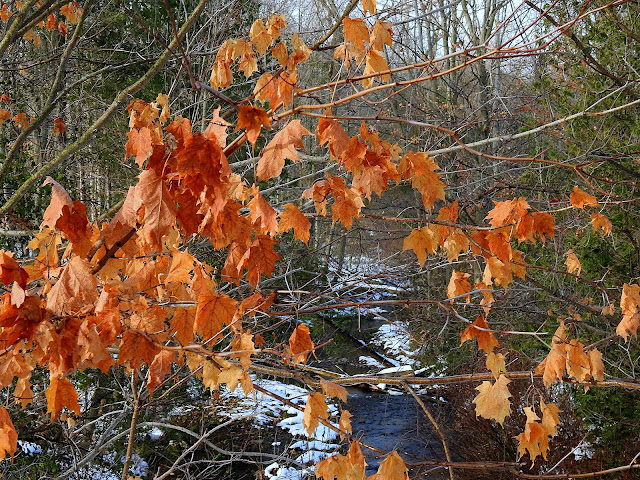 Woke up this morning, went into the washroom, grabbed my clippers, and off came my sideburns.  Now, you might ask, why would I do that??  Well, I guess it was just because I could as George used to say.  I really can't think of any other logical reason.  Well, maybe it was because I got tired of looking like a scruffy mountain man.  I didn't cut off my mustache or beard because if I did that I might have ended up looking like a 9 to 5 accountant or something.  Anyway, the sideburns are once again gone until next time.  And, oh yes I'm sure there will be a next time. 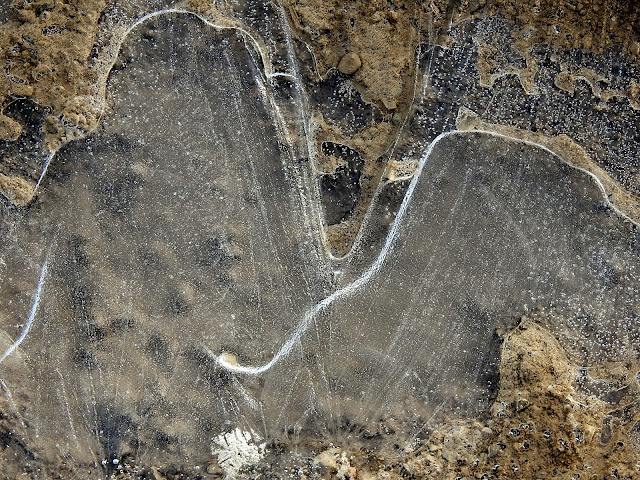 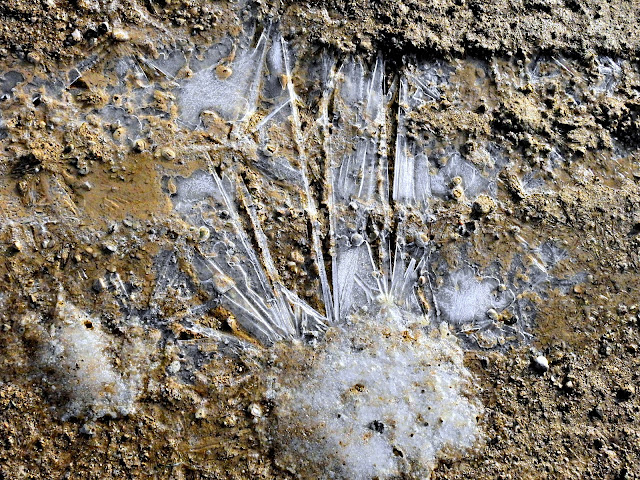 Another beautiful morning with lots of sunshine and above-freezing temperatures.  Bonus.  Pheebs and slipped on down to our country walking spot and got some paws and boots on the thawing and slightly muddy gravel road.  We didn't walk as far as usual again because I am having problems with my right leg. 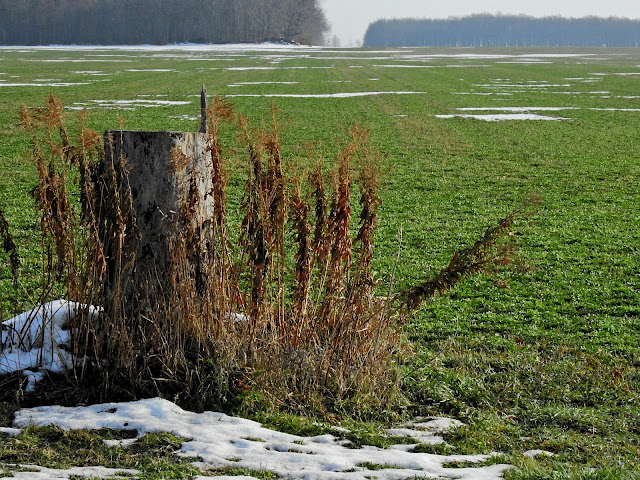 Following our walk, we slipped around a couple of big country blocks snatching a few photos along the way.  We passed over a few creeks so that is why I called tonight's blog, 'A Few Creeks Along The Way'. 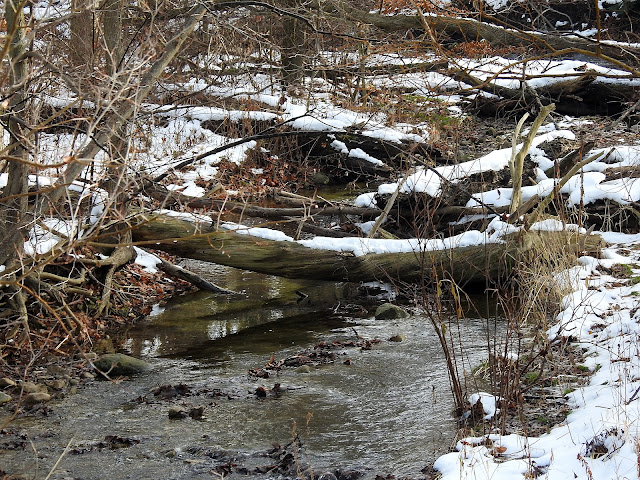 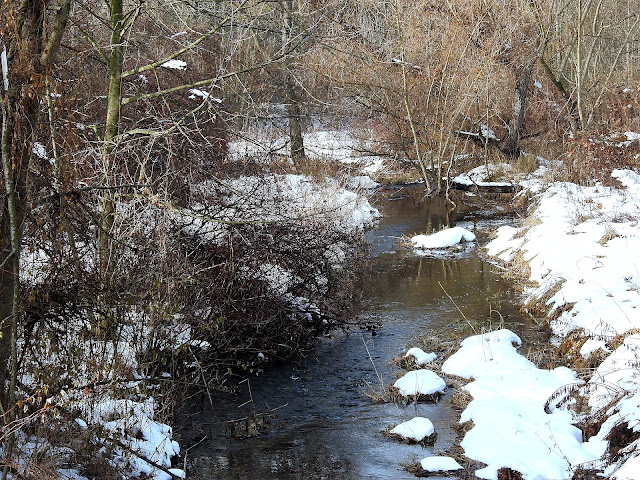 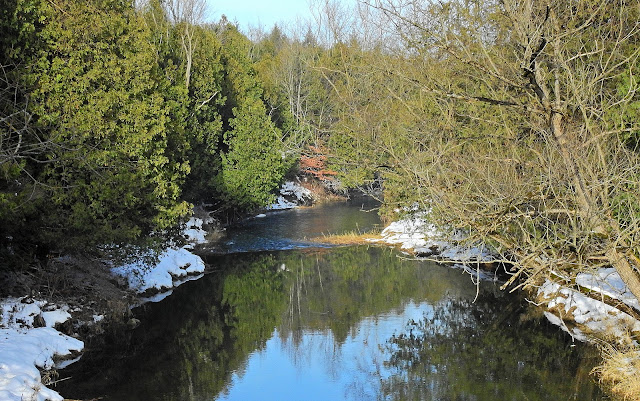 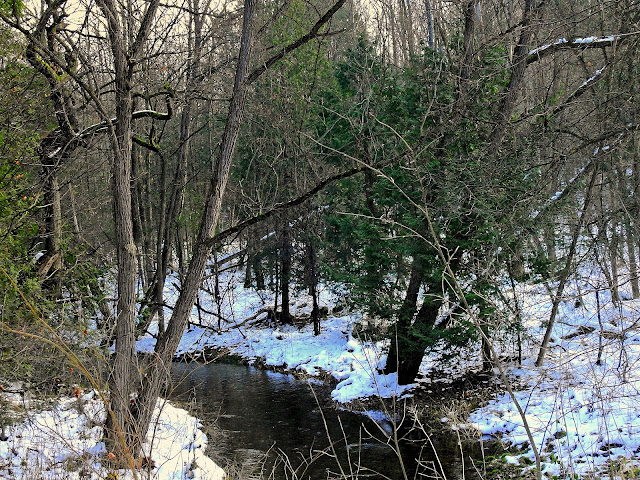 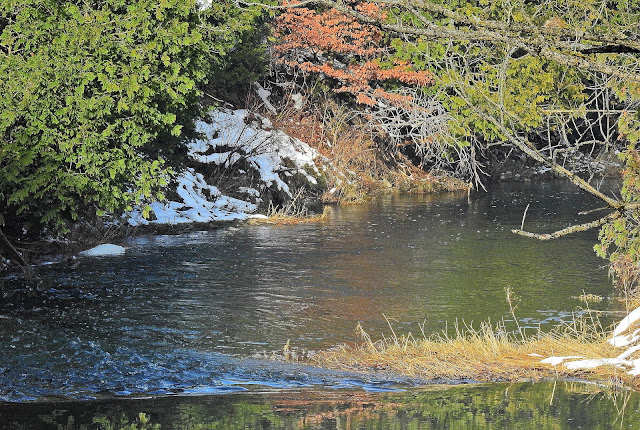 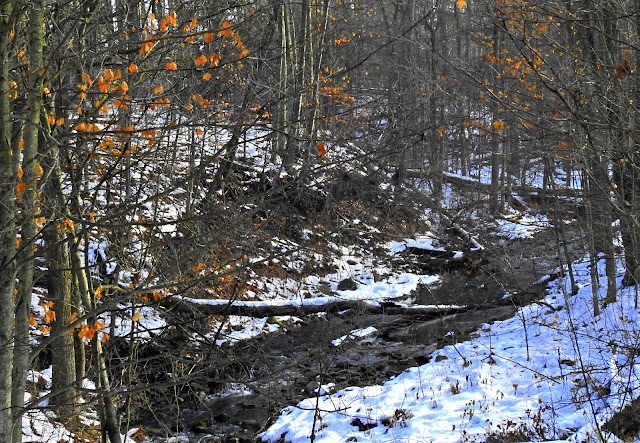 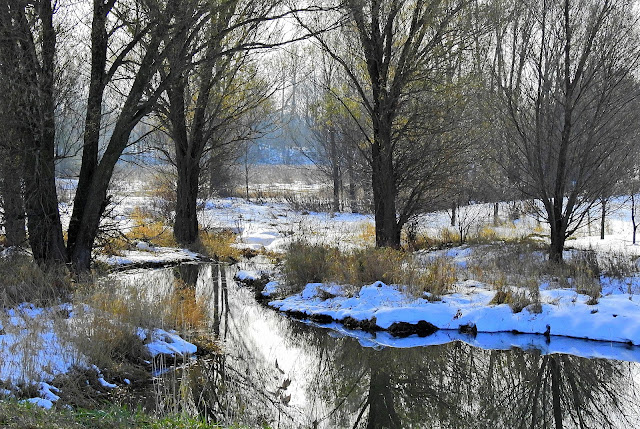 I have been having trouble on and off with my right leg for over a year now but these past few months it has been more on than off.  Sometimes I can walk fine with no pain and then zap there it is again and it causes me to slow right down and limp.  Pheebs and I have had to shorten up a lot of walks.  The pain shifts around between the groin, my upper leg, and my hip.  I think the only reasonable cure for it is long dry desert walks and Arizona rock scrambles during the winter months. 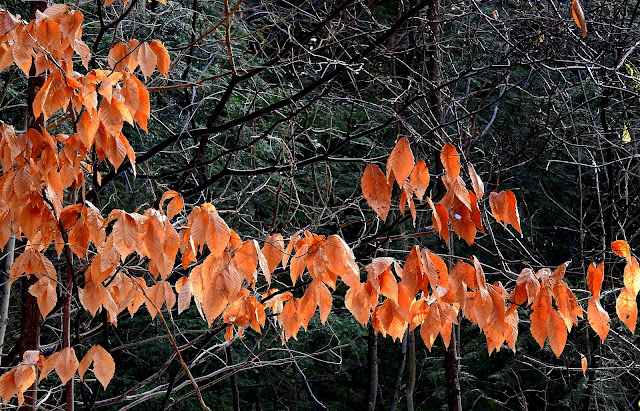 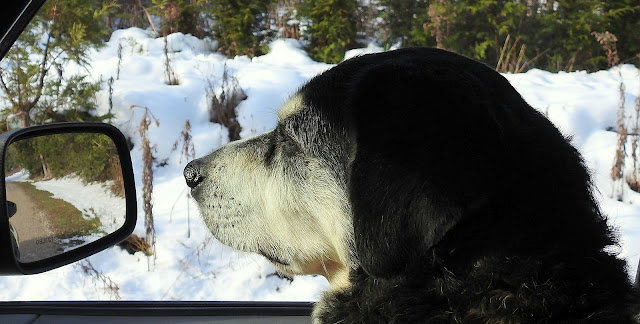 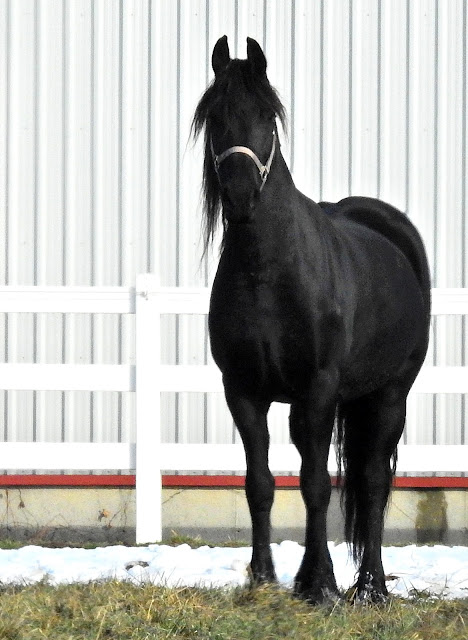 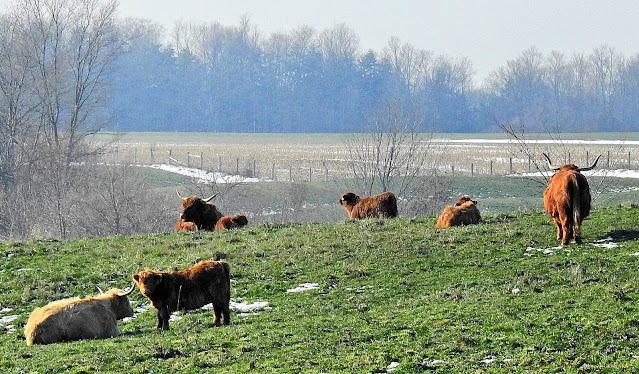 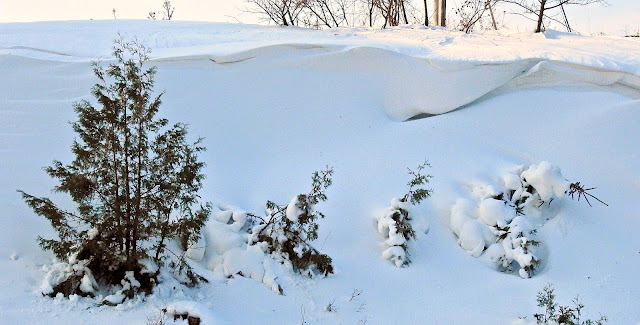 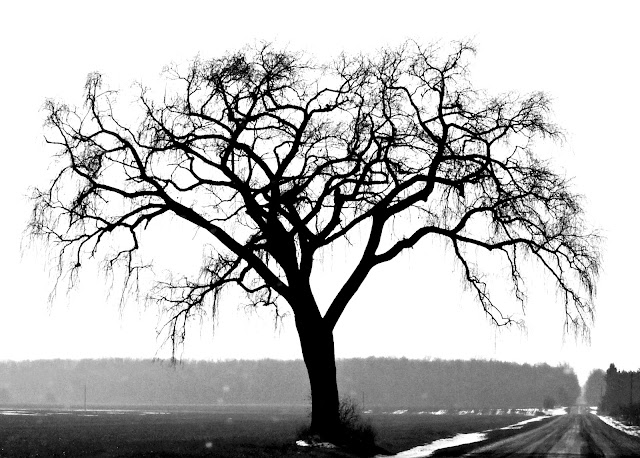 With it feeling very Spring-like again today I figured I had better get myself outside and do some very Spring-like stuff.  Fired up the wheelbarrow, grabbed my leaf rake and fork, and proceeded to rake up the driveway leaves where all the snow had melted.  It was a good feeling to be outside and doing something.  I think if these nice days keep up we might be seeing some sleepy eyed crocus flowers poking their heads up and wondering what the heck is going on. 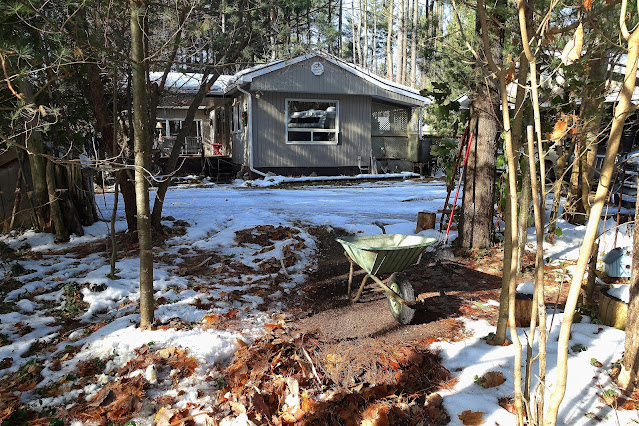 Not a squirrel has been on the bird station since I trimmed the cedar branches yesterday.  I can tell no squirrels have been on it because the birdseed is not vanishing.  The birdseed I put on Wednesday night was still there this morning.  I'm cautiously optimistic but I know better than to let cautious optimism ingrain itself in me when it comes to squirrels and birdfeeders.  A number of helpful readers had suggested I put some kind of cone structure over that top round area and I too had thought about that but to do so would also have denied the birds from using that round area as a feeding and resting platform.  Mourning Doves like to sit up there and rest.  As for feeding the squirrels, I do have five pine posts and one stump that I always leave birdseed on for them.  I only get upset with the squirrely guys when they get onto the bird's bird feeders.  Otherwise, the squirrels, chipmunks, and bunnies are all quite welcome here........But then, it was just short of 3 p.m. this afternoon while tipped back in my sunroom recliner reading that I noticed one of the black squirrels go racing across the yard and right up the big cedar tree.  I watched him frantically racing from branch to branch trying to find his launch pad which of course was no longer there.  In a seemingly frenzied state, he raced down the tree, ran to the base of the bird station, and tried to climb the pole.  He didn't know I had previously sprayed that pole with WD-40.  Needless to say, he didn't get far.  From there it was back up the cedar tree for a repeat performance from a few minutes before.  Back down the cedar tree he again went and ran out to the feeder to fuel up on a few more seeds on the ground.  From there he raced over to the small pine tree.  I knew right away what was going to happen here.  And, it did.  Up he went and immediately launched himself through the air at the feeder.  'Bam' he bounced off the blue bin lid and tumbled to the ground just like a couple days ago.  Without missing a beat he was back up the big cedar tree again racing furiously through the branches trying to find a jumping-off spot but to no avail.  I thought for sure I was going to see a flurry of black fur flying through the air.   Back down the tree he came, scruffled around for a few more seeds, then scampered off across the road and that was the last I saw of him.  No doubt about it....he will be back again tomorrow when both his and my stress levels will once again entwine to make for another interesting day.  By the way, I refer to this squirrel as 'he' all the time because we all know female squirrels would never cause this much trouble.  Am I right guys.....eh:)) 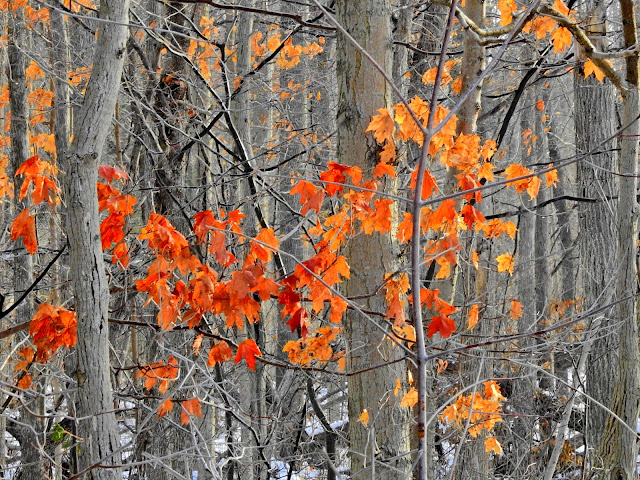 GROANER'S CORNER:(( The symphony orchestra was performing Beethoven's Ninth.  In the piece, there's a long passage, about 20 minutes, during which the bass violinists have nothing to do.  Rather than sit around that whole time looking stupid, some bassists decided to sneak offstage and go to the tavern next door for a quick one.  After slamming several beers in quick succession, one of them looked at his watch and said, "Hey! We need to get back!"  "No need to panic," said a fellow bassist. "I thought we might need some extra time, so I tied the last few pages of the conductor's score together with string. It'll take him a few minutes to get it untangled."  A few moments later they staggered back to the concert hall and took their places in the orchestra.  About this time, a member of the audience noticed the conductor seemed a bit edgy and said as much to her companion.  "Well, of course," said her companion. "Don't you see? It's the bottom of the Ninth, the score is tied, and the bassists are loaded." 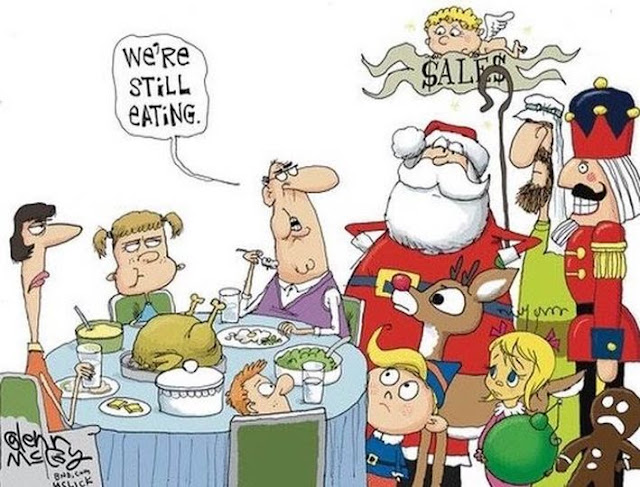 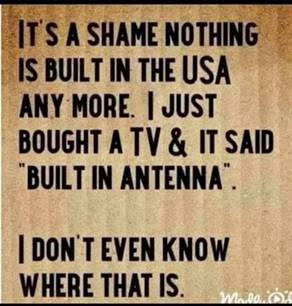