Needing some exercise, Scooter took Pheebs and I for a drive to Goderich and back this morning.  Picked up some gas while we were there as well.  No McDonalds coffee to go this time because Scoot wouldn't fit through the drive-thru.  Could have parked it and walked in but 'awww phooey I didn't figure I needed a coffee anyway'.  We took a cruise down around the harbor, stopped for a prescription at Walmart's Pharmacy, and headed for home.Our new owner has taken down the old beat-up sign at our Park's entrance and has been busy redoing the whole entranceway.  No doubt it will be very nice when he is finished.  And, we heard rumors of a new'Bayfield Pines' sign going in as well.  Now that's a real crowd-pleaser too:)) 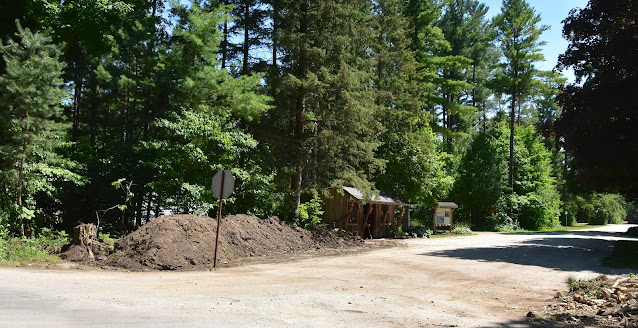 A big truck and flatbed trailer have been coming into the Park and working away all day hauling out the rest of the old hunks and chunks of machinery.  By the end of the day, our Park could be free of all the old Dinosaurs that have been here taking up space for years.  It is so nice to have a new and competent Captain at the wheel of the ship.  And one who knows Port from Starboard.  The Park is back on course and sailing in much calmer waters now.  And, here's the best part....we the residents are not seasick anymore like we were not that long ago with all the ups and downs, tossing and turning.  'Aye Aye Captain', steering a steady course we are now.  'Set her into the wind boys and swing them sails around':)) 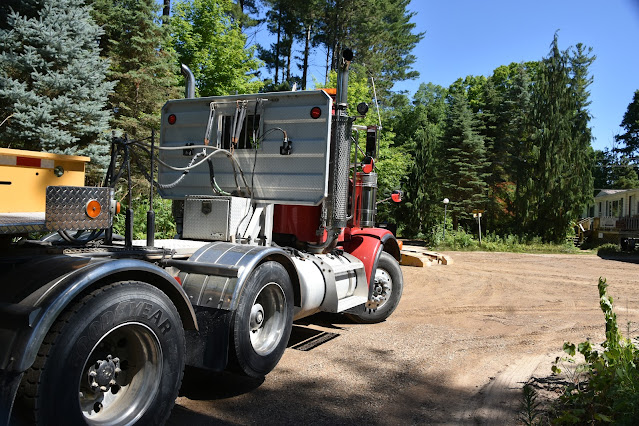 Seeing how Kelly and I are of course officially in our retirement years, we have quite comfortably slipped into a routine many of our fellow Seniors find themselves in as well.  Not much goes on around us that we don't know about and we make a special Senior effort to make that so.  If we hear a vehicle going by we make it a point to know who it is, and we do that by quite often stopping what we are doing or lifting ourselves out of our chairs to......look out the window!!  And by golly if it isn't a familiar vehicle we are quick to come up with half a dozen really radical assumptions of who might be in that particular vehicle and what the heck they might be doing driving around a Park.  Today was a good example of that and keep in mind that we Seniors crave excitement and when a big truck rolled in towing a large flatbed trailer this morning, our attention was immediately peaked.  One after another that flatbed trailer was loaded with pieces of machinery and driven out of the Park.  The big question now for our Senior minds was, 'where the hell is that truck taking all those big machines'??  We knew it wasn't far because the truck didn't take long to return for each load,  It was sometime shortly 3 p.m. when I heard the truck and trailer going by again and managed to catch me a glimpse of the Park's large road grader all loaded up.  Well, that was just too much for my inquisitive 77-year-old mind so I zipped out the door, hopped into the Jeep, and like a sluethful Dick Tracy, I followed that truck at a distance to see where in the blazes it went.  And, it didn't go too far.  About 3 miles east of our Park is a heavy truck repair facility called 'Anchorvale Repair and Service', and that is where all the old machinery from our Park went today.  Sometimes it sure doesn't take much to entertain we older folks and today was just one of those days.  And here, yesterday I thought I would be doing the same thing today that I did most of......yesterday.  Well, it just goes to show that nobody knows when big exciting things are right around the corner waiting to jump out and surprise us.  And especially if you are a Senior.   Who would have ever thunk it eh:))      Kelly's youngest son, Ben and his two boys, and his girlfriend popped in this afternoon on their way up the road to Deer Park Lodge.  Deer Park is right on the lake and Kelly managed it for most of the ten years she worked there after we moved to this area back in late October of 2002.  Long-time readers might remember all my photos of Deer Park Lodge way back when.GROANER'S CORNER:((  The mayor of a Jewish village decided to create an additional room in their home.  His wife spoke to the general contractor for some time. They laughed and enjoyed what seemed like a long conversation. Her husband asked what they were talking about. The woman introduced the two men and the general contractor returned to his work. The husband asked, "Did you know each other?" The wife replied, "Yes, actually. We were engaged to be married when I was very young.  "Her husband smiled and said. "Wow, I guess you should be happy you married me. I'm the mayor. If you had married him, you would have been married to a general contractor." "No" she replied. "He would have been the mayor."

Why were E.T.s eyes so big?  Because he saw the phone bill.

Why was school so much easier for cave people?  Because they had no history to study! 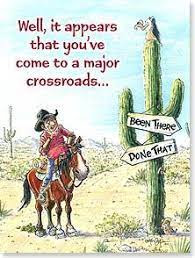 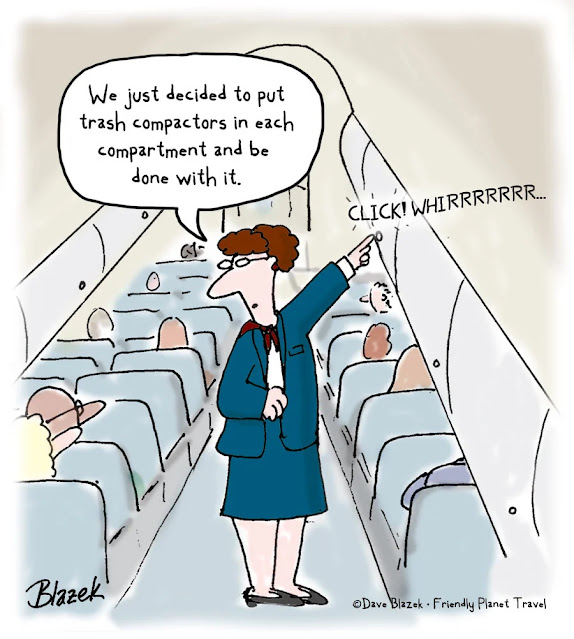