It was 7:45 when all three of us piled into the Jeep and rolled out the driveway heading for London's University Hospital.  Kelly was feeling very tired and nauseous.  Weather and traffic were good so we weren't long in getting to London.  Dropped her off at the hospital's main entrance and she headed inside for her 8 o'clock appointment.  Pheebs and I headed straightaway back out of London and lost ourselves in the countryside with the eventual destination of home in mind.  Kelly's blood transfusions and iron infusion were going to take time and they told her it would be this afternoon sometime before Kelly would be done with everything.The day's heat and humidity were forecast to be high so I figured the best thing for Pheebs and I to do were to head home to our cool house.  North of London we swung west following a number of gravel roads in a northwest direction towards Bayfield.  I intentionally got us onto unfamiliar roads and territory until we reached a point where I was sure I had misplaced myself correctly.  I never use our GPS much now because we generally don't stray too far from home anymore and I always know where we are.  Although I didn't know exactly where we were I had a good idea in what direction Bayfield was located.  I turned on the GPS and activated a feature called 'Go Home' and sure enough it worked.  It showed my position and the correct route to our house.  I saw the town of Arkona well west of our position and that told me I was much further south than where I thought I was but I was right on in which direction Bayfield was located.  The only problem with a GPS is that it takes all the fun out of intentionally getting lost and then figuring out where you are and how to get to where you want to go.  I followed the GPS route until we reached a familiar little town called Park Hill where we slipped through a Tim Horton drive-thru for a coffee and a rare carrot muffin.  From Park Hill, I knew the way home so canceled the GPS directions.  We rolled through Grand Bend and 20 minutes later pulled into our driveway northeast of Bayfield at 10:15 a.m.  Now, I consider that a nice little road trip. 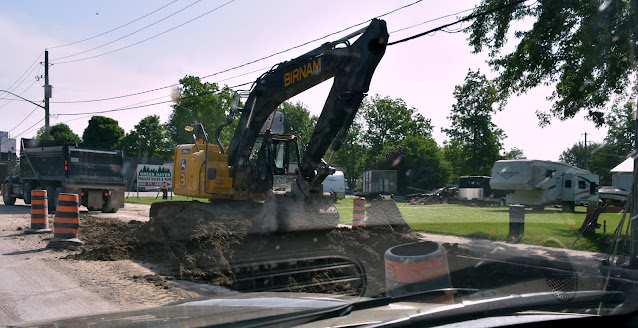 I wasn't expecting a call from Kelly until maybe around 1 p.m. or later but at 11:45 the phone rang and it was Kelly saying everything went fine and she would be ready to be picked up in about an hour.  Pheebs and piled back into the Jeep and rolled out of the driveway right on the stroke of high noon.  And this time we had the Jeep's A/C going full tilt all the way back to London.We were almost at the hospital when my cell phone rang with Kelly on the other end saying she was at the main entrance and ready to be picked up.  Less than 5 minutes later she was in the Jeep and we were headed north out of London.  Stopped in Lucan for a coffee and sandwiches to go and we were back on the road again.  I think it was around 2:30 when we pulled into the driveway with 234 miles on the tripometer for the day.  We'll probably have to sell the house now to cover the gas bill:((  And oh my was it ever hot and humid out this afternoon with the weather site saying it was 87F.  To me, it felt like 107!!  The weather channel said with the humidity factor figured in it was over 100F with a heat warning in effect.Kelly said, at the hospital, she was given the iron infusion first, then two blood transfusions along with two bags of saline and two injections directly into the IV line of something else.  She had several blood tests as well with the first one before the transfusions showing a hemoglobin number of 6.6 which is just one notch above what is considered critical at 6.5....  Last week's blood test showed a 6.5 number and the Dynacare lab where she had blood drawn actually red-flagged that number and sent it directly to her London doctor.   That's common practice for some labs to do that.  It's no wonder she has been so weak and tired this past week.Within half an hour of arriving home, Kelly developed a bad headache, chest pains, and feelings of nausea.  She laid down for a while and had something to eat later.  At the time of publishing this tonight she is feeling a wee bit better.  We'll see how things go tomorrow...........GROANER'S CORNER:(( An elderly woman from Brooklyn decided to prepare her will and make her final requests. She told her rabbi she had two final requests. First, she wanted to be cremated and second, she wanted her ashes scattered over Bloomingdales."Bloomingdales!" the rabbi exclaimed. "Why Bloomingdales?""Then I'll be sure my daughters visit twice a week."

A friend asked a gentleman how it is that he never married?  Replied the gentleman, "Well, I guess I just never met the right woman ... I guess I've been looking for the perfect girl."  "Oh, come on now," said the friend, "Surely you have met at least one girl that you wanted to marry."  "Yes, there was one girl .. once. I guess she was the only perfect girl I really ever met. She was just the right everything .. She was the perfect girl for me."  "Well, why didn't you marry her," asked the friend.  "She was looking for the perfect man," he said. 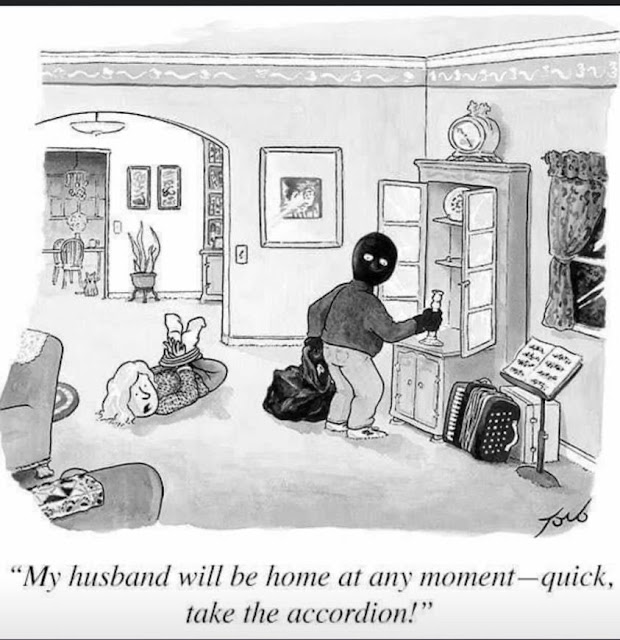 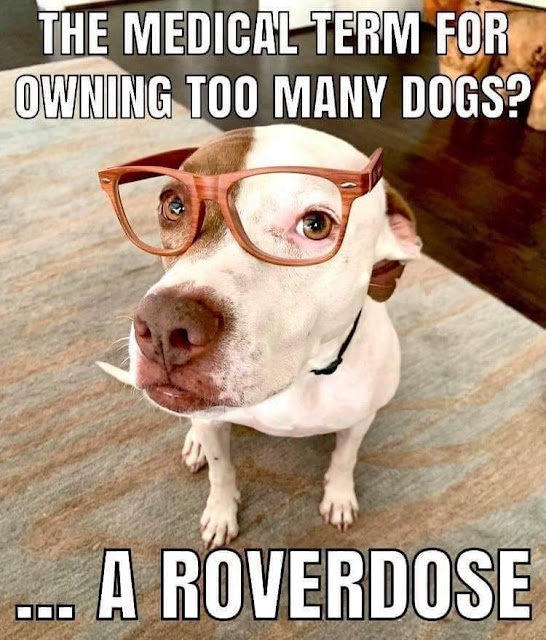