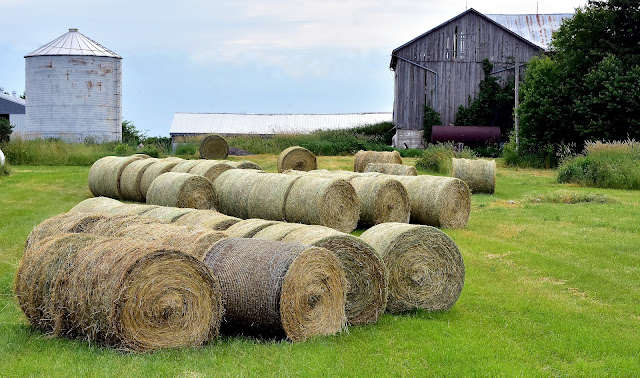 The Five Seasons Park we live in about 5 minutes from downtown Bayfield is located on a hundred acres of land bordered by farmland, the Bayfield River, and bush.  Along the southern edge of the property is a hardwood forest growing right down to the river.  When we first moved here nearly twenty years ago, Kelly and I carrying 4 buckets and a shovel climbed down the steep forested embankment to the edge of the river below where giant ferns taller than us grew.  We dug up some of those big ferns and lugged them all the way back up the embankment and home.  The ferns we have growing around our house now are from those original ferns we carried home all those many years ago.  A twisting steep road was dozed through the forest down to the river about a dozen or more years ago and had grown back in again.  The new owner, with a backhoe tractor, has cleared that road to the river so last night Kelly and I took the Jeep on an old road through the forest to the embankment top.  From there we walked down the recently cleared road to the river.  Kelly went about halfway and Pheebs and I walked about two-thirds of the way down but not right to the river.  We intend to come back when it's not so hot and humid and walk the road all the way down to the water's edge.A nice walk and a short drive around the countryside this morning for Pheebs and I.  We are so fortunate to live in the area we do.  With our Park located in the countryside and not near any heavily populated cities, traffic is never really a problem.  Rural farms in the area are mostly, cattle, pigs, horses, chickens, and sheep.  The crops grown are corn, soybeans, and wheat with a smattering of barley, clover, alfalfa, and sunflowers, etc.

Rain was predicted for today but it didn't happen so I had to haul out the garden hose and sprinkler to give my 'new grass' area a soaking.  Not as hot and humid today so I trimmed some overgrown bushes and Kelly watered the front flowerbed by the road.  She has been feeling pretty good these past four or five days.

Certainly not as many birds at the feeders as in wintertime so that's a big help with our annual birdseed bill.  Grackles are still the dominant birdseed eaters followed by Nuthatches, Mourning Doves, Cardinals, Blue Jays, Cowbirds, Red Wing Blackbirds, Downie Woodpeckers, Rose Breasted Grosbeaks, and Black-Capped Chickadees.GROANER'S CORNER:(( A foursome approached the sixteenth tee. The straight fairway ran along a road and bike path fenced off on the left. The first golfer teed off and hooked the ball in that direction. But the ball went over the fence and bounced off the bike path onto the road, where it hit the tire of a moving bus and was knocked back onto the fairway. As they all stood in silent amazement, one man finally asked him, “How on earth did you do that?” He shrugged his shoulders and said, “You have to know the bus schedule.”

- What exactly is junk?  Junk is something you throw away three weeks before you need it.

- Never, under any circumstances, take a sleeping pill and a laxative on the same night.

- Q: How many Toronto Maple Leafs fans does it take to change a lightbulb?

A: None - they're quite happy living in the shadows. 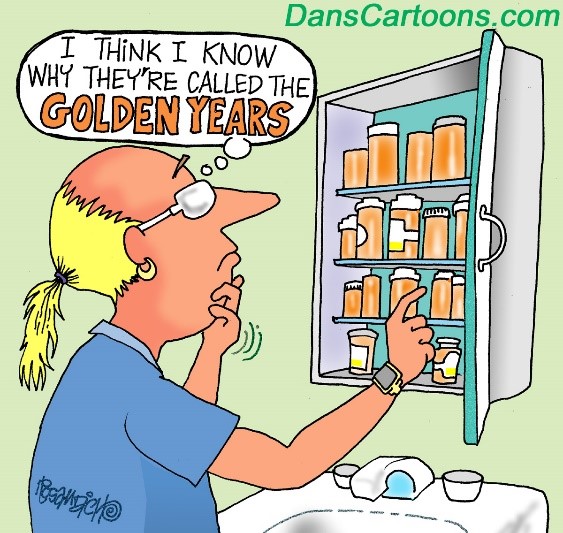