A VERY TIRED KELLY HAS HERSELF A RELAXING DAY

It was Kelly's first morning walk with Pheebs in over a week.  Despite feeling tired when they got back Kelly said it was nice to be out walking in the fresh air again.  With sunshine overhead, no wind, and morning temperatures at least above freezing for a change, Pheebs and I didn't waste any time getting ourselves out into the countryside to our walking spot for a skip up the road and back.  With a number of outside 'to-do' things on my list we headed straight home after our walk. 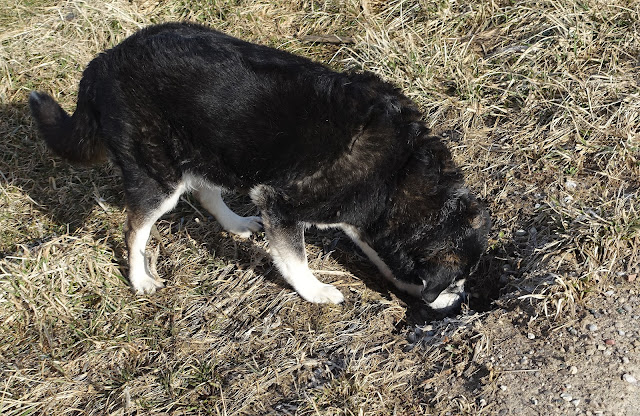 Hooked up the utility trailer to the Jeep and took a couple big piles of pine needles to our Park's recycle yard.  I also turned our outside water on and blew out the carport and front porch deck with the leaf blower.  Burned up a load of stuff in our burning barrel and did some more yard raking.Checking the 14-day weather forecast I was able to determine only one night ahead slightly below freezing so that told me it was finally okay to turn on the outside water for another season.  Will I de-winterize our little Class C Winnebago??  No, not for a while yet.  The left turn signal on Scooter is not working so it's probably a bulb.  I tried to figure out how to change the rear bulb but I finally gave up.  Even managed to lose 2 of 10 screws.  Par for the course for me.  I'll just have to stick my arm out the window when I plan to make a left-hand turn.  Might have to go to the Canadian Tire store and get an arm extension though.  I  think they have them on sale next week:))Kelly stayed in and had herself a well-deserved relaxing day.  She felt tired after her morning walk with Pheebs and that tiredness stayed with her all day.  The correct wording for Kelly's liver disease is Primary Biliary Cholangitis.  The name was changed from Primary Biliary Cirrhosis to Cholangitis because too many people associated the word Cirrhosis with alcohol.  Kelly's liver disease is now classed as Stage 4 Compensated.    GROANER'S CORNER:((   A passerby noticed a couple of city workers working along the city sidewalks. The man was quite impressed with their hard work, but he couldn't understand what they were doing.  Finally, he approached the workers and asked, "I appreciate how hard you're both working, but what the heck are you doing? It seems that one of you digs a hole, and then the other guy immediately fills it back up  One of the city workers explained, "The third guy who plants the trees is off sick today."

He really loved her but he was just too shy to propose to her. Now he was up in his years and neither of them had ever been married. Of course, they dated about once a week for the past six years but he was so timid he just never got around to suggesting marriage, much less living together.  But one day, he became determined to ask her the question. So he calls her on the phone, "Judith?""Yes, this is Judith.""Will you marry me?""Of course. Who's speaking?" 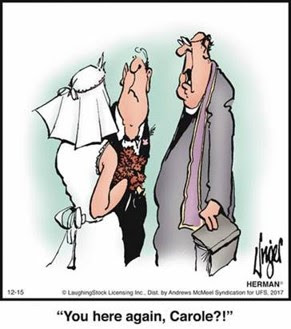 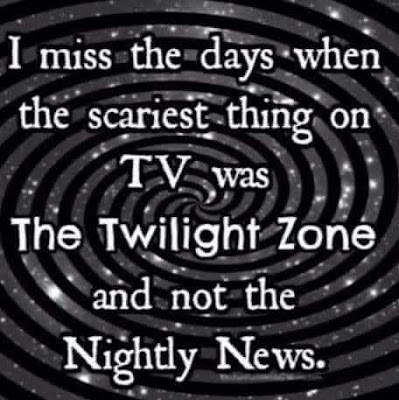