THERE IS A REASONABLE CHANCE KELLY MIGHT COME HOME TUESDAY

Kelly phoned this morning about 11:30 saying all of Sunday's blood tests came back fine and didn't show anything abnormal.  That at least probably rules out Leukemia.  The two X-rays she had did not show anything abnormal either.  They have her on anti-biotics and there is talk of maybe having to give her Beta blockers.  They had her on a 'no-eat' schedule again for a while earlier today but lifted it this afternoon.  She's back on full meals as of supper time tonight.  It doesn't look like they will be redoing an endoscopy or colonoscopy.  It seems the doctors are baffled as to the cause of her bleeding.  Her hemoglobin numbers had again dropped slightly overnight.  She said as soon as she can get out of bed today she is going to head for Tim Hortons six floors below her and this time she is not going to just get a jumbo coffee, she's going to ask for a pail full of coffee!!  With this recent spate of freezing cold weather and blowing snow our front yard birds have kept me on the run keeping the feeders topped up.  Those guys sure can pack the seeds away. 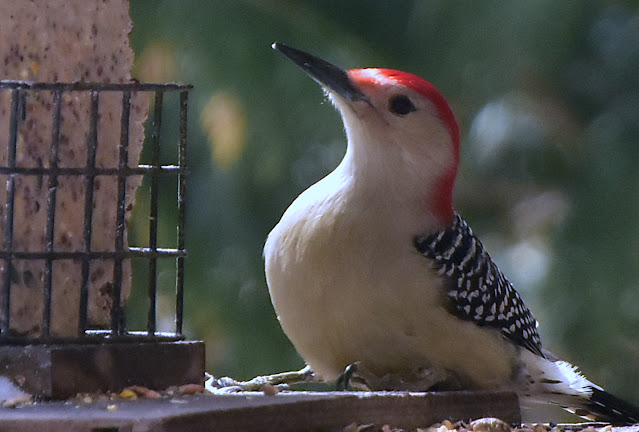 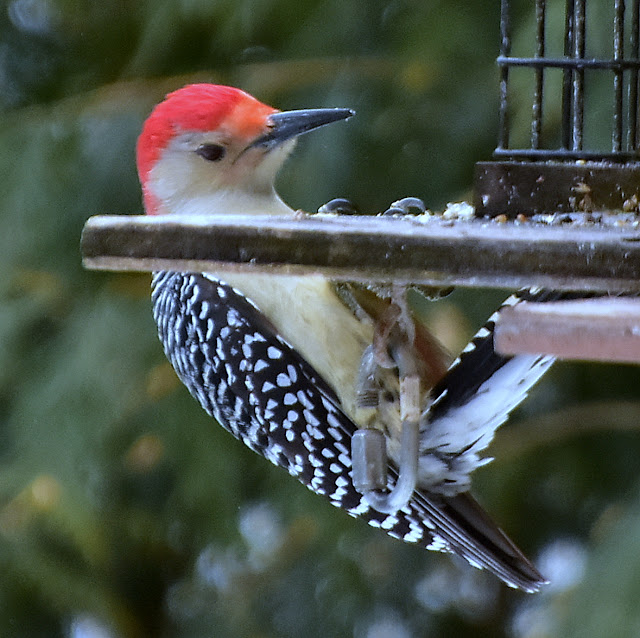 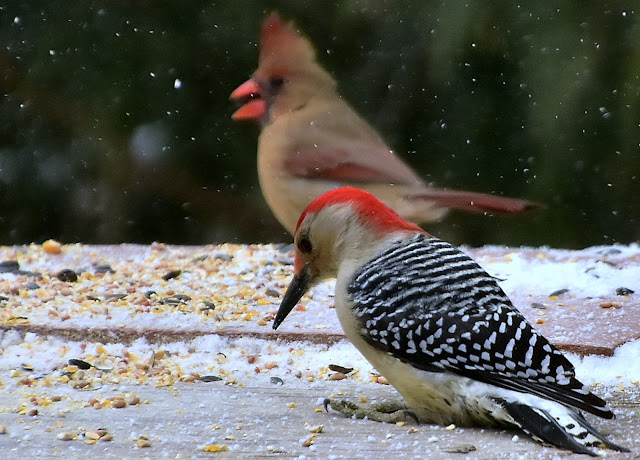 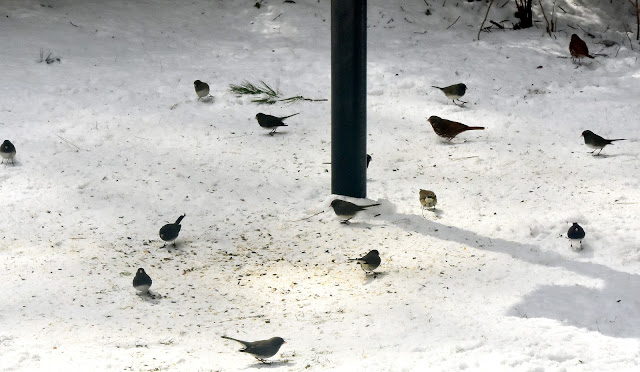 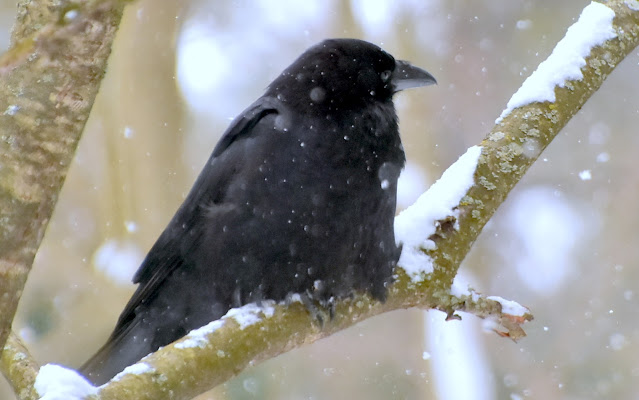 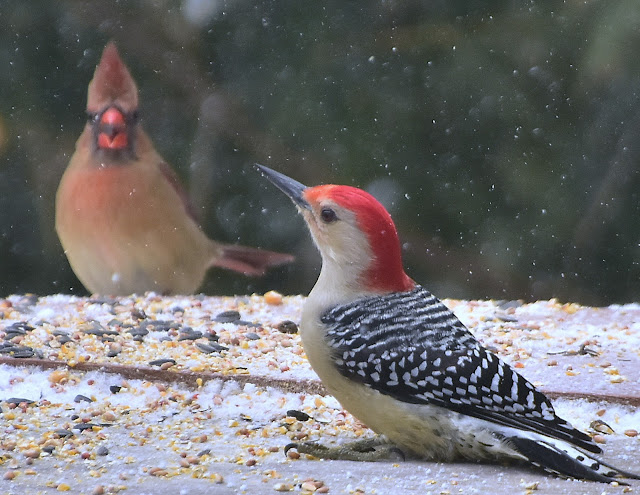 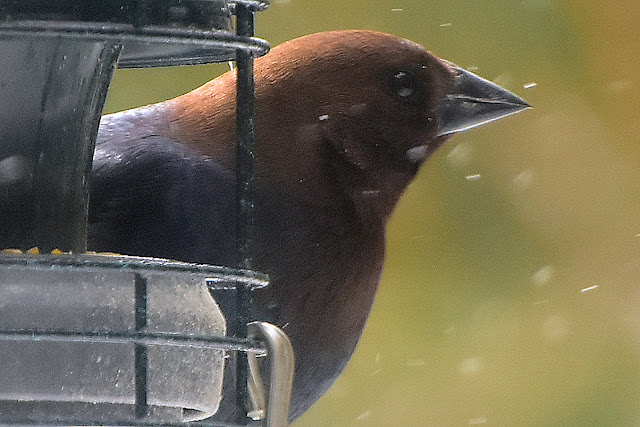 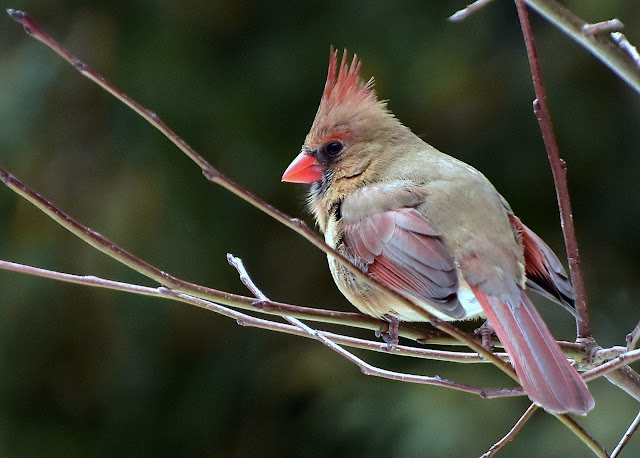 It snowed overnight again and it was so discouraging to see all the snow outside.  And it was still coming down.  I had to really reach my right leg around behind me to give myself a good swift kick out the door later.  Turned east out of the Park but I could see snow blowing across the road.  Turned around and headed into Bayfield instead just as the Sun broke through the clouds for a few minutes.  Just the usual drive around Bayfield and we were heading home again.  Sometimes it was clear and sometimes it was blowing snow.  Not a good day to be on the roads going anywhere.  Kelly said it was blowing snow outside her window in London too.  We got up to 19F today with a wind chill factor of 6F. 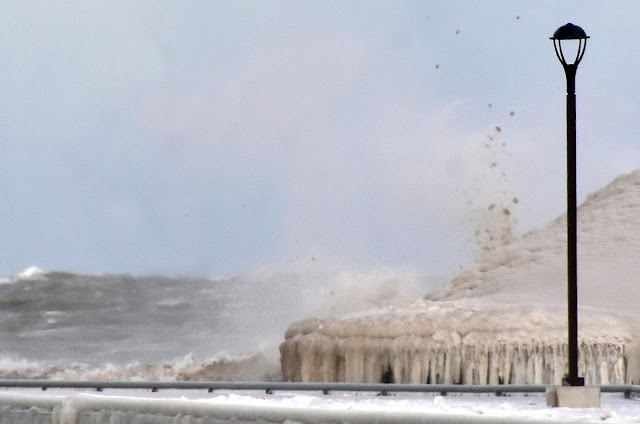 Update:: Kelly called a couple times this afternoon and there is now a possible chance she could come home Tuesday afternoon but it depends on several things.  They are starting her on a low dose beta-blocker this afternoon and if her hemoglobin numbers stabilize in the morning chances are good she may come home.  She said a lady doctor told her this afternoon that they were getting a schedule ready for her to follow after she leaves.  Once home she will have to get frequent blood tests to monitor the hemoglobin numbers in case they start dropping again.  They don't want her to end up in the bad condition she was in last Thursday.  The lady Doctor also told her this bleed is definitely connected to her liver disease.  So, Pheebs and I have fingers and paws crossed that we will be on our way to London to bring Kelly home tomorrow.  I checked the weather forecast and tomorrow looks much better than today and yesterday.  Even some sunshine predicted.  So that's the scoop Alley Oop:))  GROANER'S CORNER:((  Some years ago, Michael J. Flanagan, a successful New York contractor, was standing on the deck of the Staten Island Ferry when a car got loose and sent him into the river where he drowned.  The following Sunday his widow, all decked out in deepest black, was standing on the church steps after Mass, receiving condolences and enjoying every minute of it, when an old friend of the contractor came up. "I'm sorry, Mary, for your trouble," offered the friend. "Did Mike leave you well fixed?"  "Oh, he did!" she said. "He left me almost a half million dollars."  "Well now, that's not bad for a man who couldn't read or write."  "Nor swim either," added the widow.