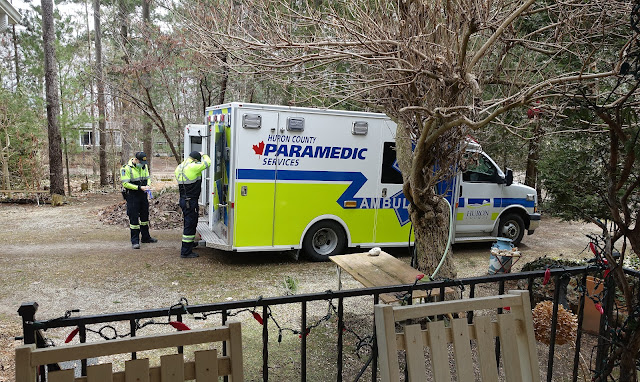 Kelly was sick in the night with severe nausea and it never let up.  She was weak and had trouble walking.  Kelly is not one to complain or even mention anything if she's not feeling well but it was obvious this morning she was in distress.  She made it out to her chair in the living room with hopes the nausea would clear up but it didn't.  She has had bouts of anemia these past few weeks as well and the liver-related itching has increased in intensity too.  Shortly after 1 p.m. she finally agreed to let me call an ambulance.  Twenty minutes later she was on her way to the Goderich Hospital.  Now, something I want to clear up here.  Kelly was diagnosed with her liver disease (primary biliary cirrhosis) back in 2013 and at that time I thought it was diagnosed as stage four and that is what I have mentioned in the blog a few times.  Kelly informed me this morning she was diagnosed with stage two in 2013 and stage four two years ago.  I don't know how I get things so muddled up at times but I do. 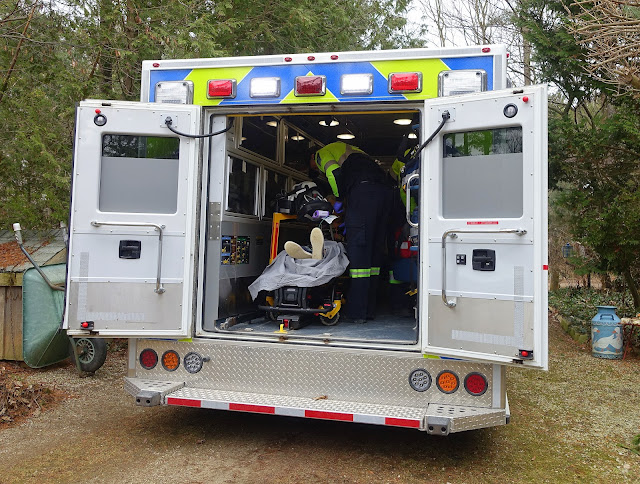 Kelly didn't have the strength to take Pheebs for their usual morning walk this morning so right after the ambulance left early this afternoon I took Pheebs out to our favorite country walking spot for our first walk of the year there.  It was a cold southerly wind but we did okay.  Pheebs better than me because she of course had her fur coat on.
UPDATE:: Kelly was able to call me tonight at 6:40 and she is being transferred by ambulance right now from the Goderich Hospital to London's University Hospital.  She has had a blood transfusion and has been in the critical care unit and she has been bringing up blood.  She said they told her it was a good thing she came by ambulance to the Goderich hospital today.