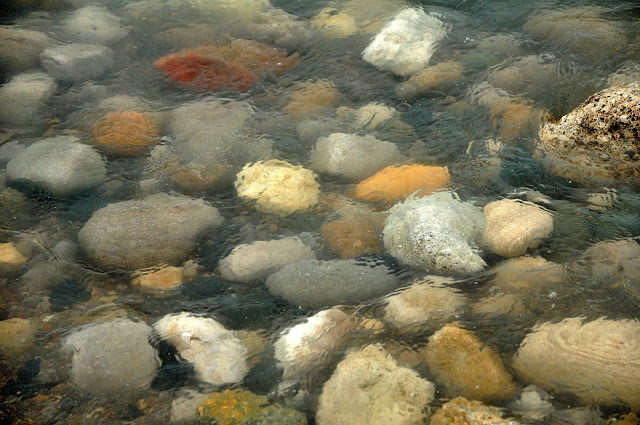 Upon waking we were surprised to find morning temperatures already up to 37F.  For southerners that sounds cold but for some of we northerners here that sounds like, 'let's get outside'.  With that thought in mind, Pheebs and I headed for the beach.  Into Bayfield, we went and made a right-hand turn on Howard Street and followed it a few blocks due west to where it ends in a parking lot area atop a bluff overlooking Lake Huron.  We were soon out of the Jeep and headed down a steep set of wooden stairs.  I counted the steps but by the time we got home later, I couldn't remember if there were 80 or 85 steps. 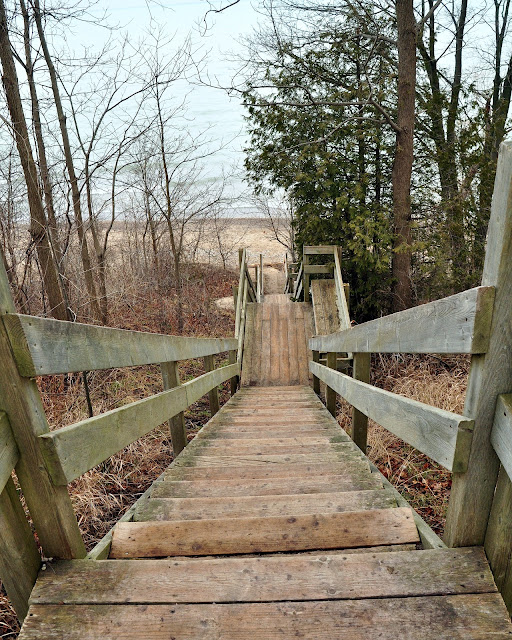 Luckily it wasn't very windy so our walk along the shoreline was doable.  I did have a pair of mitts on.  The beach along here is a mixture of sand and stones with sand making up the largest part.  Most of the colorful stones are smooth and rounded from countless years of wave action and they vary from fingernail size to about grapefruit size.  And there are countless thousands of smooth stones (maybe millions) scattered along the shoreline.  Mixed in with the sand and stones is lots of driftwood as well. 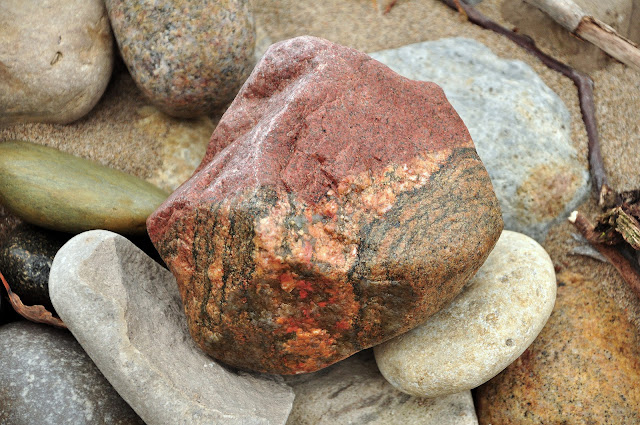 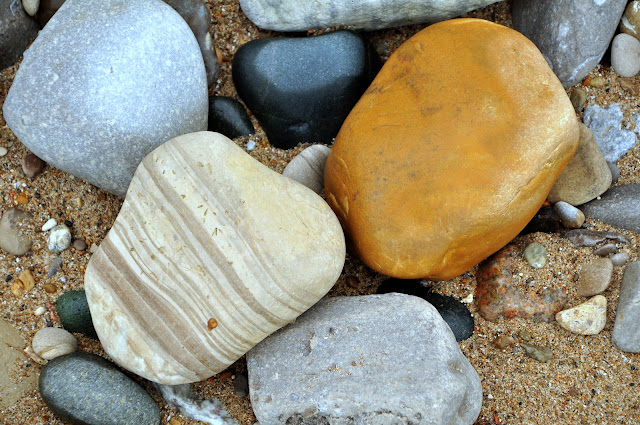 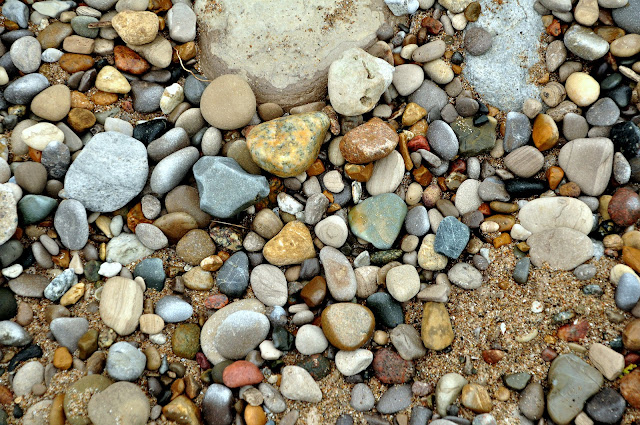 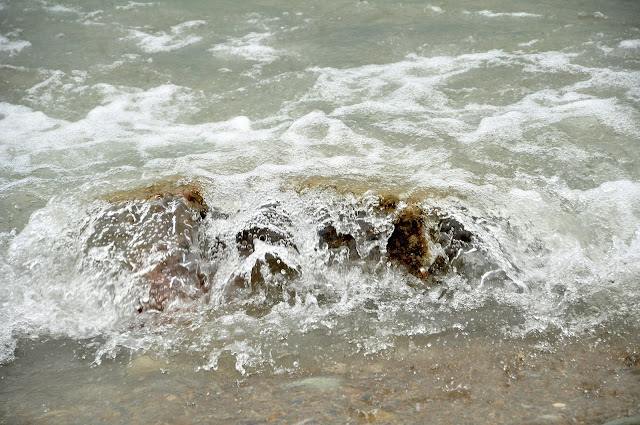 We headed south along the shoreline for about a quarter-mile snapping photos along the way and enjoying the morning strolling along beside Lake Huron.  It was nice hearing the waves gently coming in as well. 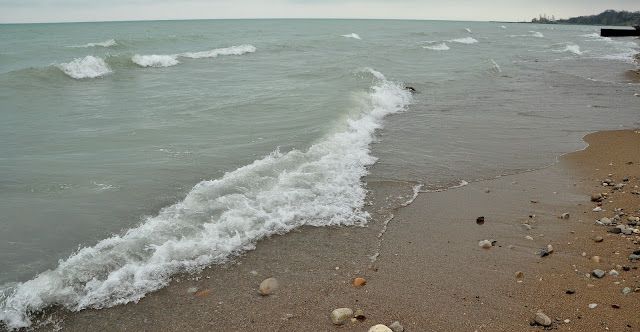 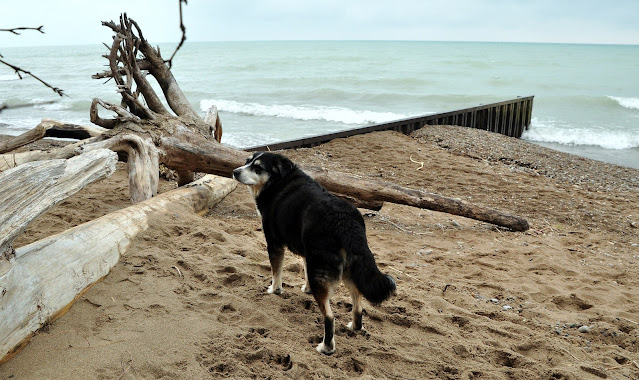 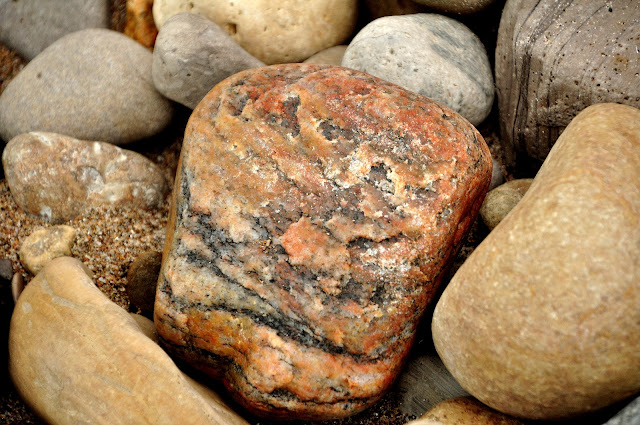 Heading back, and about to climb the steep set of stairs back up to the Jeep I looked down and noticed the lens hood from my camera was missing.  It was the regular stock Nikon hood for my 18-300mm lens.  So, off Pheebs and I went retracing our tracks all the way down the beach a quarter mile to the point where we turned around.  Searched all the way back to the set of stairs but I didn't have any luck finding the lens hood.  Disappointed, we climbed back up those steep stairs and I had to stop four times to let the burn drain out of my legs.  Maybe the 350 pounds of beach rocks in my pockets had something to do with it.  Okay, not quite that much but I did bring back a couple colorful stones.  We were home 10 minutes later. 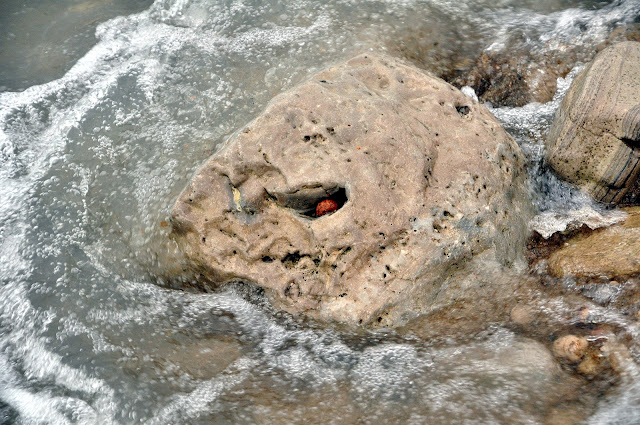 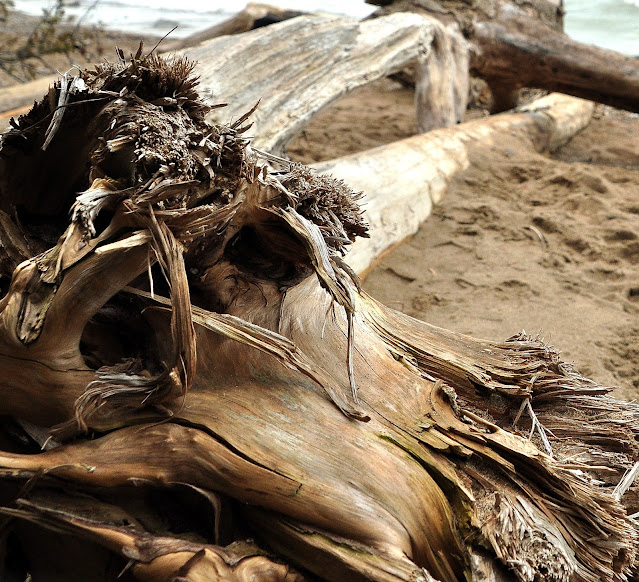 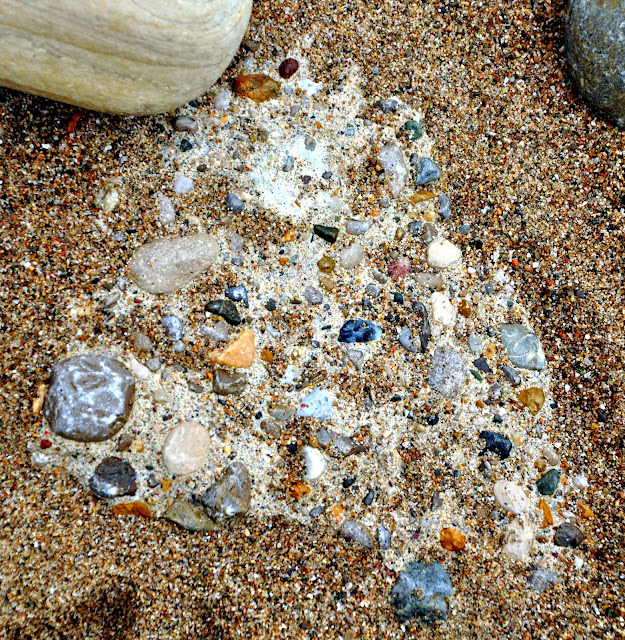 Editing my photos later I saw the third last photo I took had a dark edge in the top left corner.  That told me the lens cap was still on but it was in the process of slowly coming off and that's why the dark corner.  I figured the lens hood had to be very close to the base of the steep wooden stairway we climbed on our way back to the Jeep.  Kelly had slipped up to Goderich for some groceries and had said before she left that when she gets back we could go down to that beach area and she would help me look for the lens hood.  I knew with 'Hawkeye' on the job we had an excellent chance of finding it. 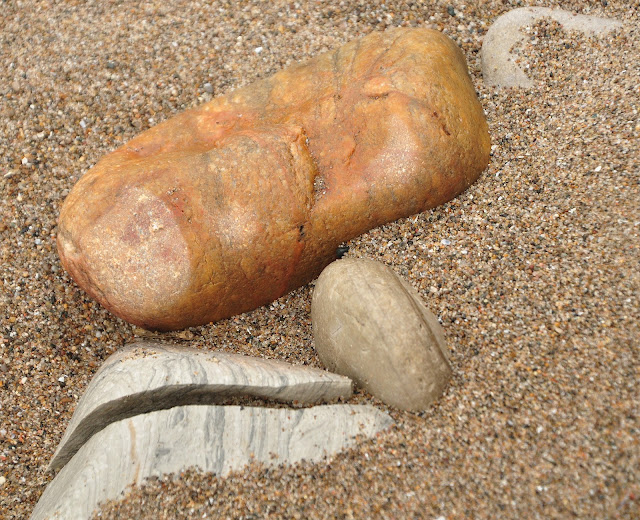 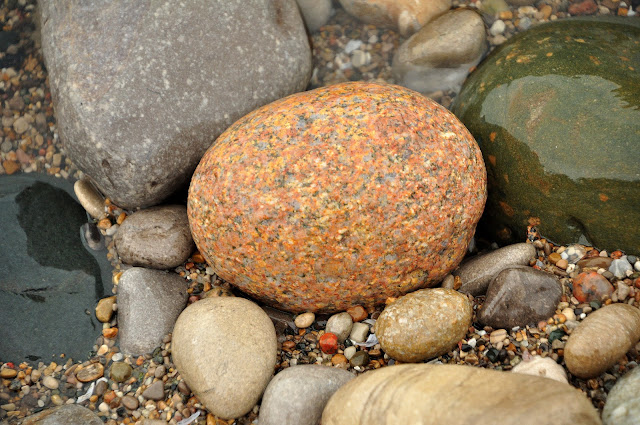 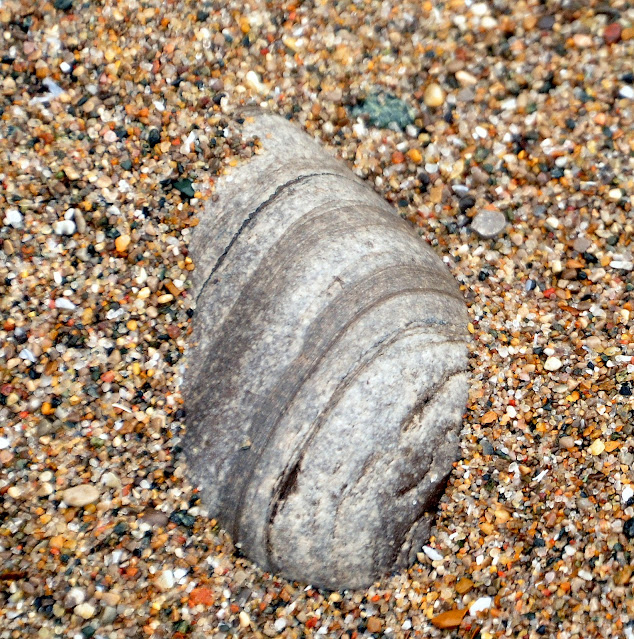 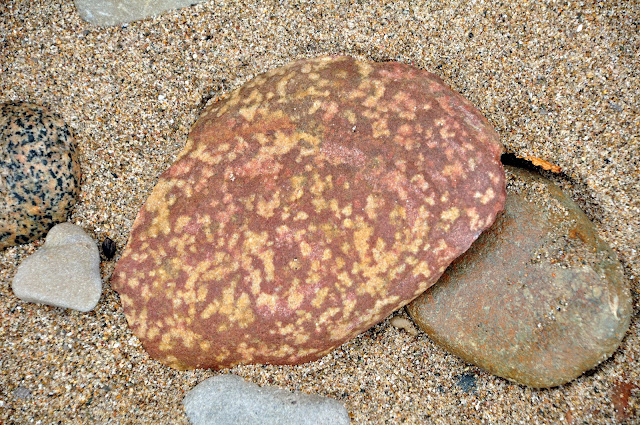 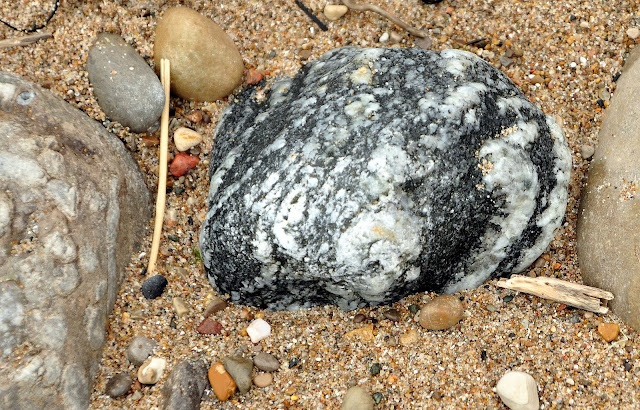 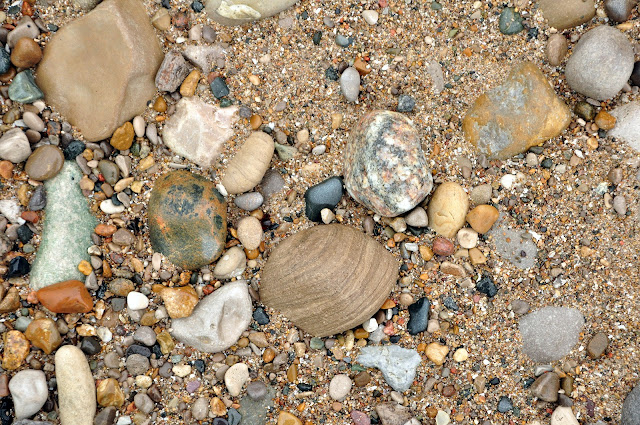 Back to the end of Howard street about 2 this afternoon Kelly, Pheebs, and I went and descended the long steep stairway to the beach.  I was ahead of Kelly so I started down the beach and within maybe 50 feet of the stairs, I found the lens hood laying right about where I thought it had to be, near a piece of driftwood.  Kelly was still slowly coming down the stairs.  We took a few pictures and climbed ourselves all the way back up those steep beach stairs to the parking lot atop the bluff.  And from there we headed home. 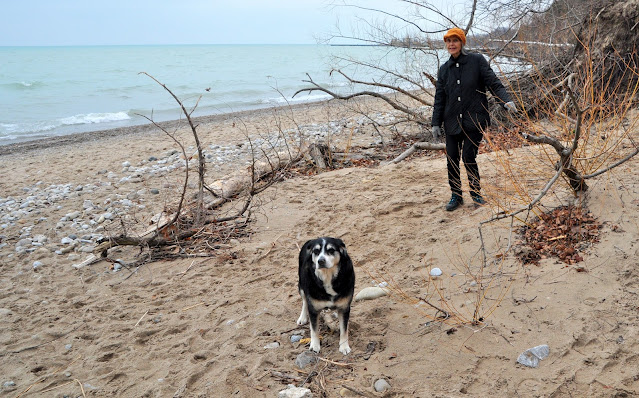 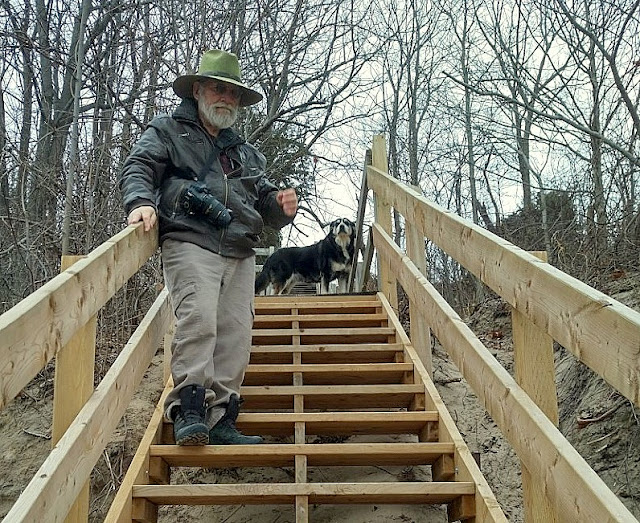 Well, it looks like we have come to the end of another year.  I had thought of doing a re-cap but the more I thought about it the more tired my mind got.  Happy New Year to everyone and thanks to all you folks for hanging in with me for another year.  I know it isn't easy at times so thanks again for your much-appreciated interest in the Bayfield Bunch............Al:)) 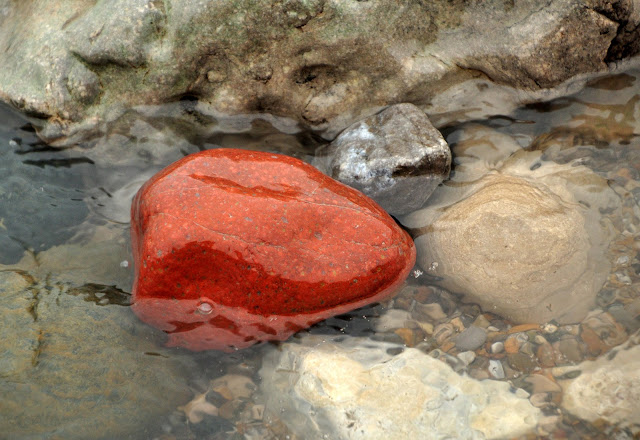 GROANER'S CORNER:((   A frog walks into a bank. He goes to the only open teller and sees that her name is Paddy Whack. "Hey, listen," says the frog. "I really need a loan! I'm out of work, and my wife and tadpoles are at home starving! I need money so I can feed them and provide for them!"  Now Paddy feels very sorry for the poor frog and asks him if he has any collateral. He holds up a small glass elephant. Paddy is a little surprised by this and quite unsure, but she feels so sorry for the poor frog that she takes the elephant to her manager. "Mr. Manager, sir," Paddy begins "there is a frog out there who desperately needs a loan. He's out of work and he has a wife and tadpoles who are at home starving. He needs some money so he can provide for them! But all he has for collateral is this little glass elephant. What should I do?"  Well, Mr. Manager takes a good hard look at that elephant, thinks about it a little, and then replies, "It's a knick-knack, Paddy Whack, give the frog a loan!"

What exactly is junk?  Junk is something you throw away three weeks before you need it.

During a recent password audit, our I.T. discovered a new computer user was using the following password: MickeyMinniePlutoHueyLouieDeweyDonaldGoofySacramentoWhen they asked why such a long password, she said she was told that it had to be at least 8 characters long and include at least one capital. 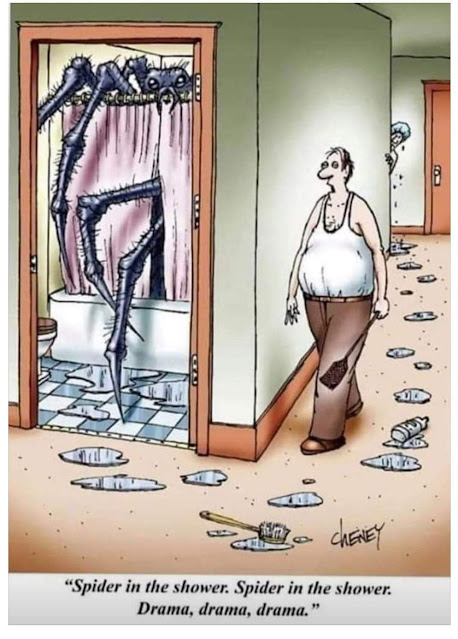 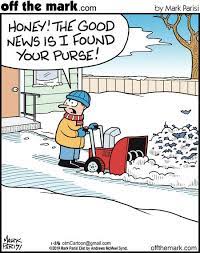