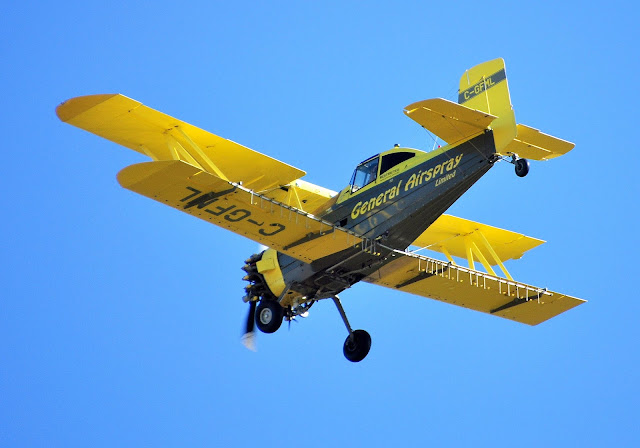 My ears are always attuned to sounds going on around me and especially so if I am outdoors.  Just back to the Jeep after our morning walk my ears alerted me to a familiar sound in the sky.  I could hear a small airplane approaching from the southeast.  Within seconds I could tell this was not the sound of a usual small Cessna motor.  This engine had a heavier sound to it so I knew it was packing a bigger beefier engine.  I've been to enough airshows years ago to know a bit about aircraft sounds.  Well within visual range, I noticed it was a bi-plane. (two sets of wings) but not of WW1 vintage.  I had a feeling this could be a crop duster heading for a job.  As it turns out, I was right. 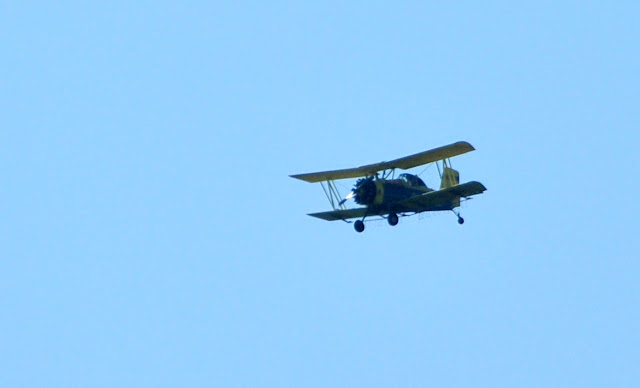 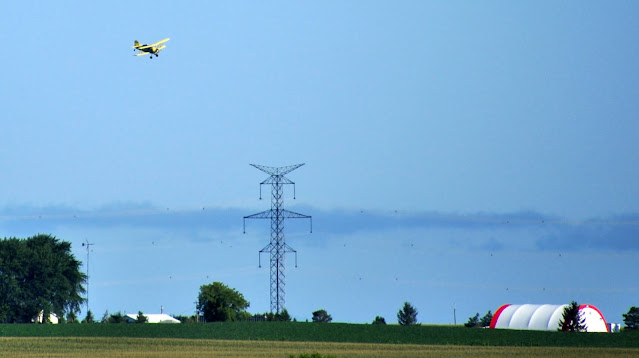 Pheebs and I didn't have any particular destination in mind so we ambled off in the same direction the airplane had headed.  A few miles up the road I spotted the plane again and it was swooping down crisscrossing Parr Line so I knew for sure it was a crop duster at work.  I've seen that kind of flying before. (by helicopters as well) 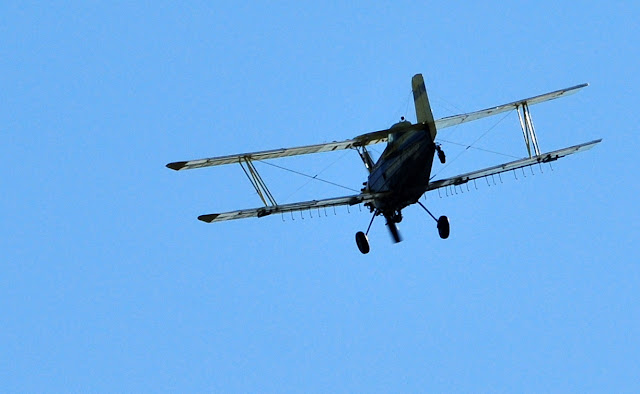 We headed up a point near where the plane was in the process of dusting a cornfield and pulled off to the side of the road.  I got out with my camera not realizing I was going to be right underneath his next run.  Watched the pilot bank to the right, level off, and lose altitude heading right for us. (I found out the next day the pilot is a female) He/she didn't have her sprayer on yet but soon as she went over us I turned to watch her go and about the same time I saw the spray I felt a slight drizzle on my arms.  I got dusted and I could sure smell the chemicals in the air.  Luckily Pheebs was in the Jeep.  Didn't take me long to move the Jeep further up the road and with a quick swipe of the windshield wiper my windshield was clear of the lite chemical sprinkle. 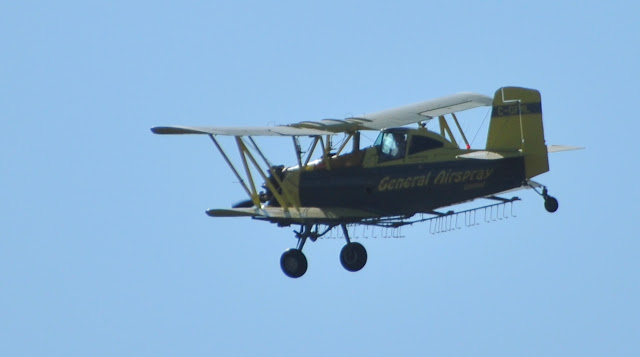 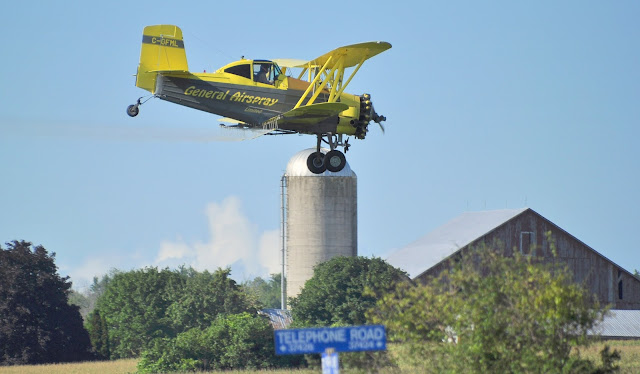 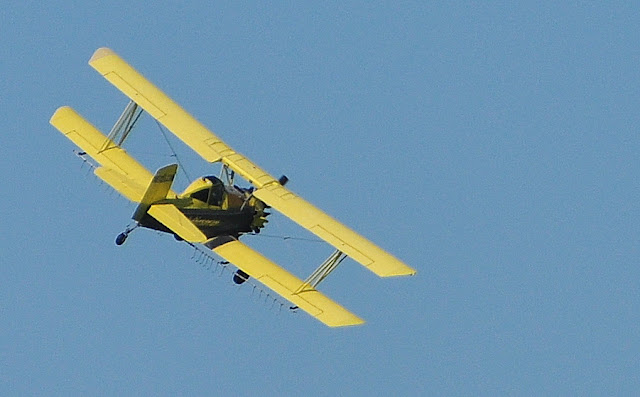 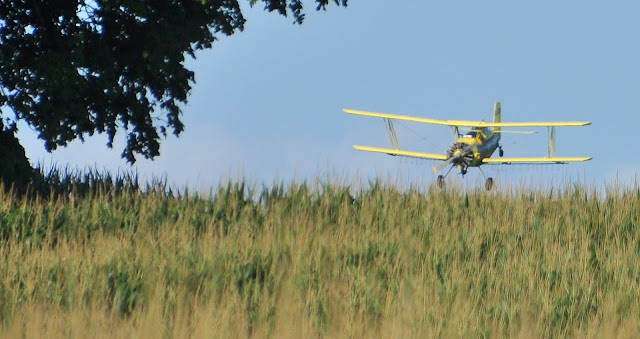 Took a few more pics then headed north up to Towerline Road and turned left.  There's a high hill there so I stopped and let Pheebs out while I continued to watch the crop duster working the field about a mile or so south of us.  Even from that distance, I could hear the occasional loud whap of the two blade propeller biting into the air just like the old Harvards (Texans) I once heard at the airshows. 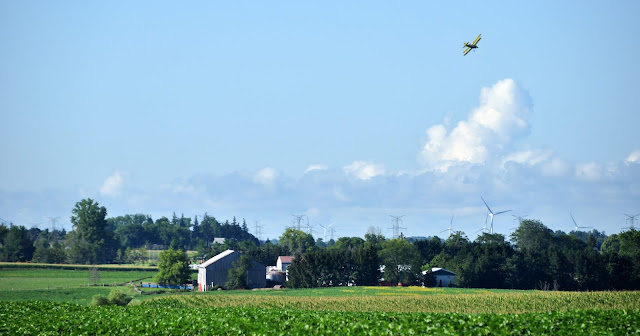 From Tower line road I turned left on Tipperary line heading back south and stopping to take a few more photos.  Like I have said many times in my posts over the years, I have a fascination with airplanes and it's probably evident in all the photos I took this morning. 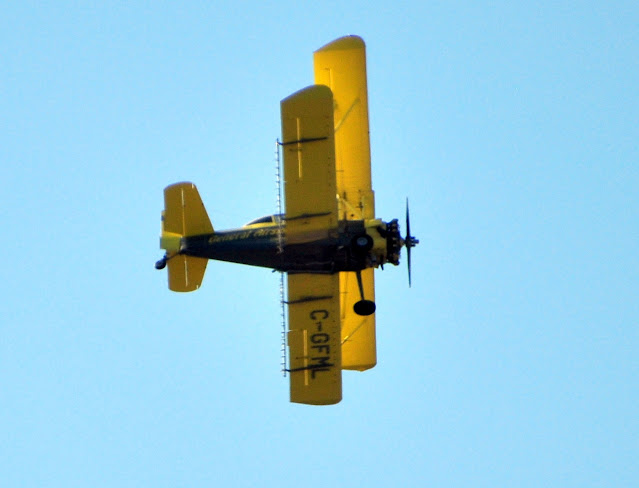 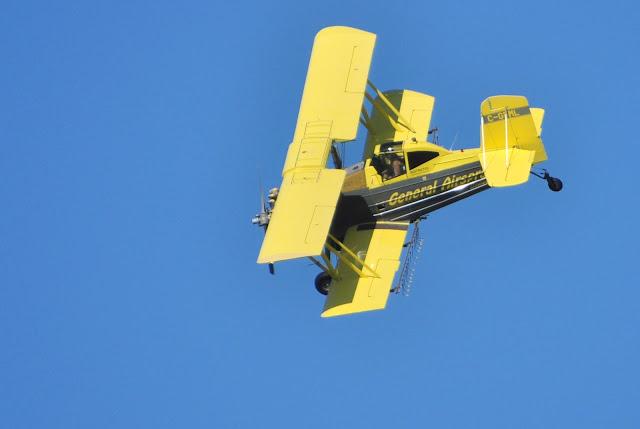 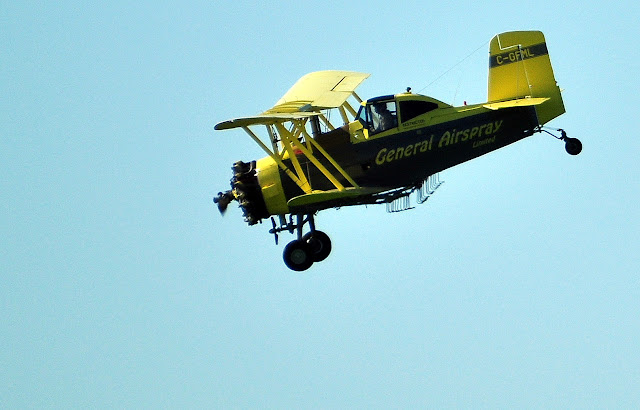 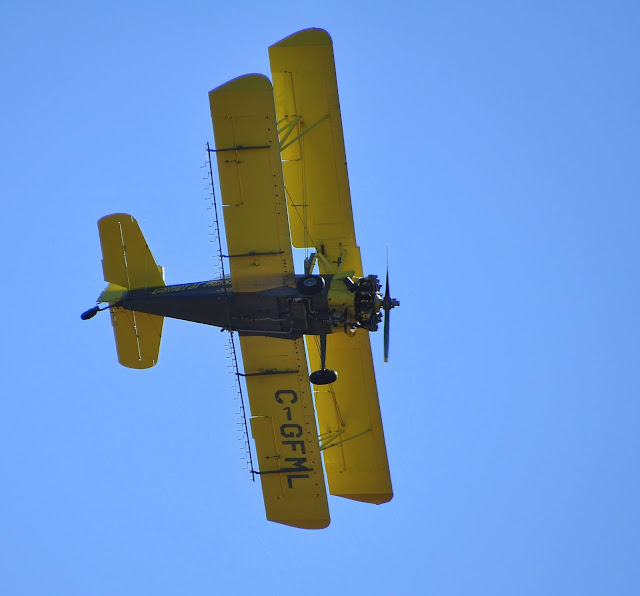 Heading south on Tipperary I then turned left onto Telephone Road which brought me back closer to where the crop duster was working the cornfield on the northwest side of Parr Line.  I was again atop a small hill so I had a good view of the plane which was now working the field from different angles. 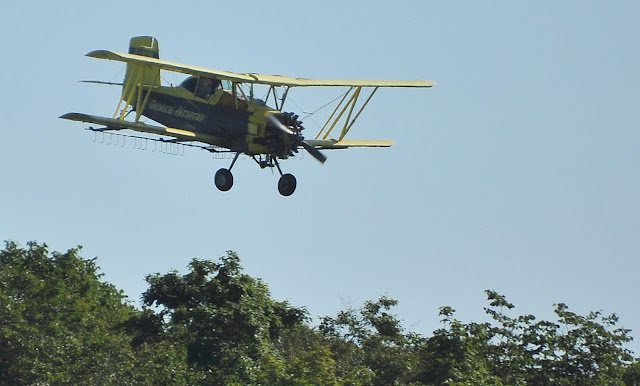 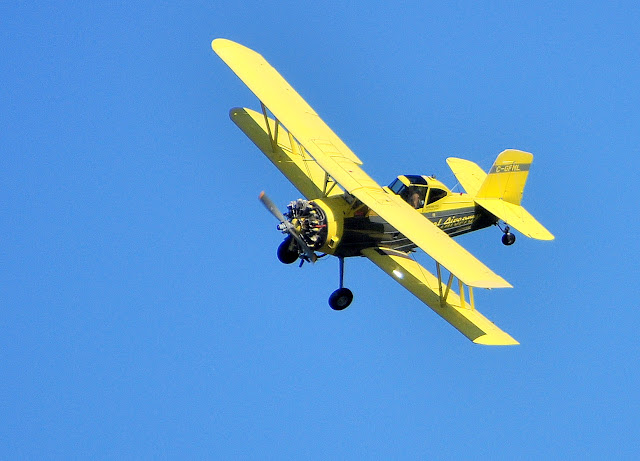 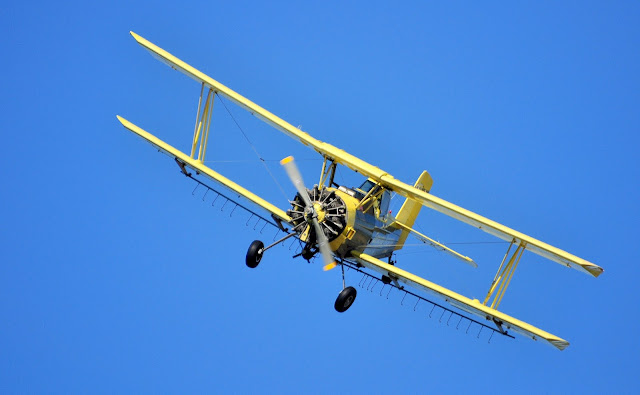 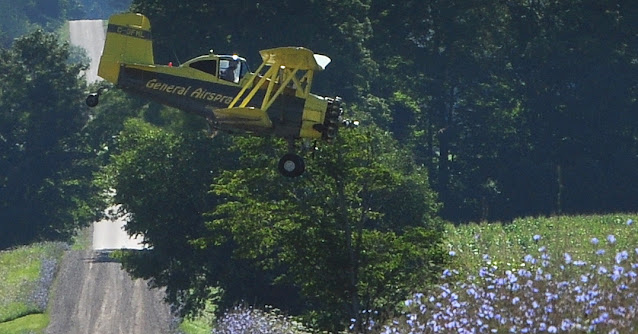 I had a feeling she might be getting to the end of the job soon and sure enough, on what turned out to be her last run she arced out farther to the northwest, banked left, straightened her wings, and instead of turning back to the cornfield, she headed right for Pheebs and I.  I knew she was on her way home.  She came down low and flew right over us while I snapped a few more photos of her coming then departing.  Gave her a wave and wished her a safe flight home wherever her home base was.  From start to finish I probably watched this pilot buzz that cornfield well over a dozen times.  How nice it was having something else to take pictures of this morning besides my usual everyday fare of bugs, birds, flowers, fields, etc. etc. and etc. 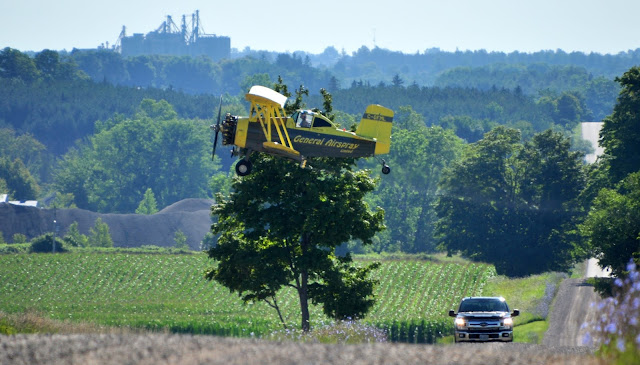 Home again I downloaded 87 airplane photos and got to work editing that number down to 46.  As the pilot flew off to the south she remained on a steady course towards London Ontario so I figured she must be based somewhere in that area.  From several of my photos, I saw the name on the plane was General Airspray Limited.  A quick Google search located them southwest of Lucan Ontario so I hopped into my own Google Maps plane, flew down, and soon located their home base at the Lucan Airport on the southeast corner of Airport Drive and Coursey Line.

How nice it was to see and focus my camera lens and attention on something different for a change this morning.  It was definitely a 'pick-me-up' few moments for me:))GROANER'S CORNER:((  In the backwoods, Mr. Stewart's wife went into labor in the middle of the night, and the doctor was called out to assist in the delivery.  To keep the nervous father-to-be busy, the doctor handed him a lantern and said, "Here, you hold this high so I can see what I'm doing." Soon, a wee baby boy was brought into the world.  "Whoa there Scotty!" said the doctor. "Don't be in a rush to put the lantern down... I think there's yet another wee one to come." Sure enough, within minutes he had delivered another little baby.  "No, no, don't be in a great hurry to be putting down that lantern, young man... It seems there's yet another one besides!" cried the doctor.  The new father scratched his head in bewilderment and asked the doctor. "Do ye think it's the light that's attractin' them?"

My nephew came over the other day and he was wearing a helmet, shoulder pads, knee pads, and gloves.  He said, "I'm gonna ride my bike!"  I said, "Where? Through a minefield?" 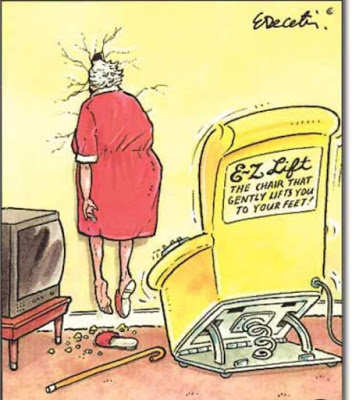 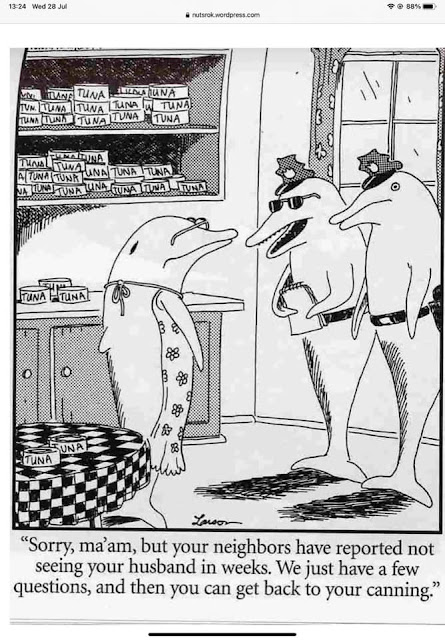