CATCHING MY BLOG UP

I think this has been my longest blog break since back in 2009.  I just needed a few days to do something different, break a few routines, and clear my head.  So, without further ado let's get on with a brief catch-up.Friday August 20th...... After a poor night's sleep and awake earlier than usual, Pheebs and I were up and out the door, stopped at our walking spot, gassed up and grabbed a coffee in Clinton, and headed east.  It had been over a year since I last stopped at a little Mennonite cemetery east of Tavistock Ontario.  Last time there I made a promise to come back, so this morning we dropped in to see the final resting place of fellow RV Blogger and friend, George Yates.  The last time there, George's headstone was not yet in place and I had wanted to return to see it.  It was a beautiful summer morning when at 10:30 I was able to take a few photos of George and Suzie's headstone.  I think it's great they have their blog header photo engraved on the stone and the words 'Our Awesome Travels'.  All the best to you George, wherever and whatever roads and trails you are traveling now.  And Suzie, if your reading this, all the best to you wherever you are. 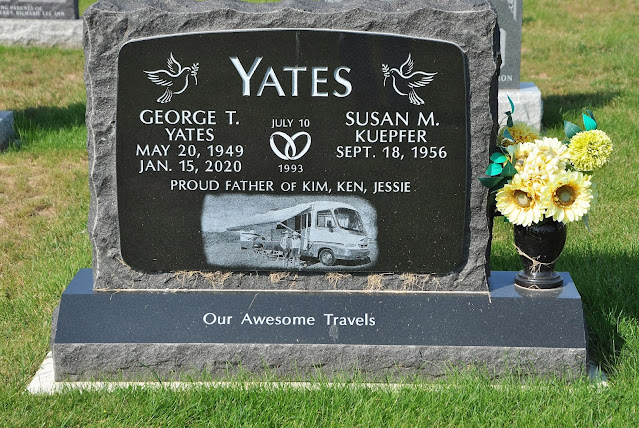 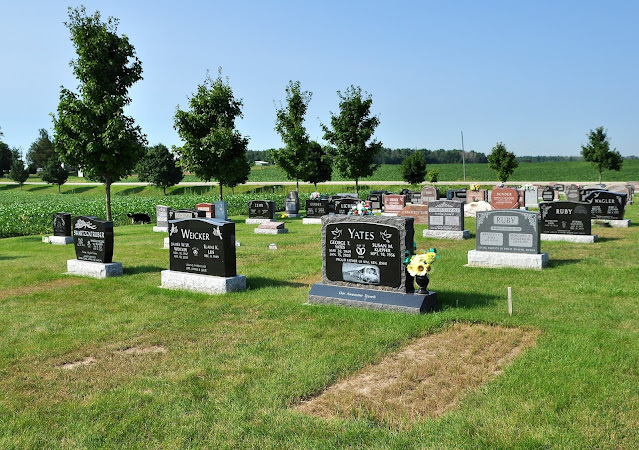 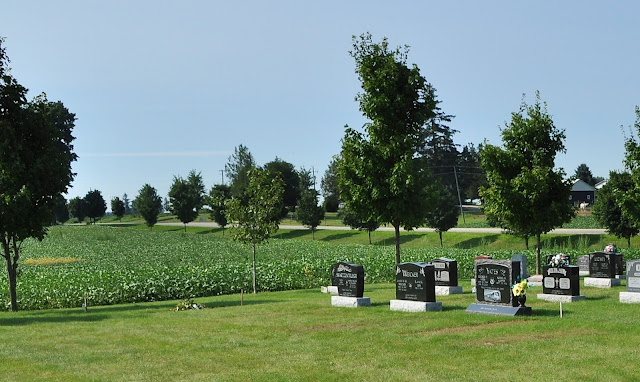 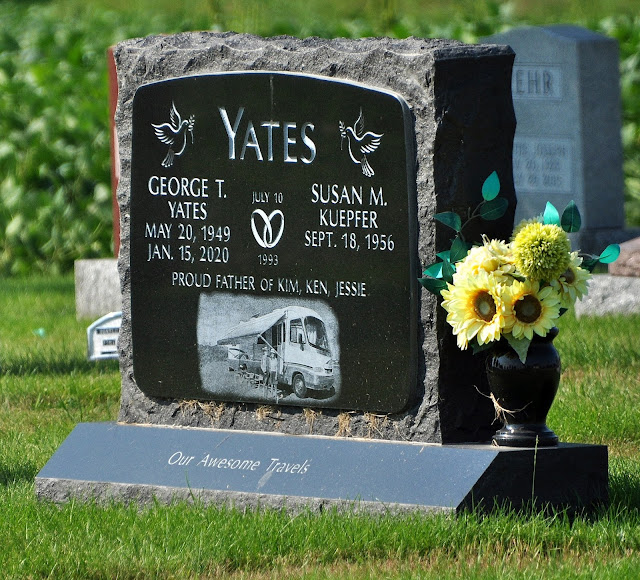 From Bayfield to the Mennonite cemetery east of Tavistock we had taken a route north of Stratford to get there.  Heading back to Bayfield we took a southern route home and bypassed Tavistock again.  Tavistock is my old hometown but there were some places south of Tavistock I wanted to see again like the Wildwood Conservation Area east of St. Marys Ontario so we skipped around Tavytown on the way home too.  We finally made it back to our house about 1 o'clock in the afternoon and called it day.  I think that was the longest day trip Pheebs and I have done since the last time we stopped at that very same little Mennonite cemetery over a year ago.Saturday August 21rst......Pheebs and I had another destination this morning.  My good buddy Jim from Lifetime Sentences in Stratford Ontario had messaged me earlier in the week on Facebook suggesting we get together for a coffee.  Great idea, so after picking up a coffee at Clinton's Tim Hortons for the second morning in a row it was 9:30 a.m. when Pheebs and I rolled into a shady little tree-lined sports Park in Seaforth Ontario's east end.  Pheebs was on her best behavior (except for eating most of Jim's peanut butter cookie) as Jim and I sat chatting for a couple hours getting caught up on things.  I think it may have been early Spring since our last coffee.  Or was it last Fall??  Jim and I go back a long time.  While chatting away something very coincidental happened while we were sitting there.  A Class A Motorhome came driving into the parking area nearby and stopped.  Younger folks exited the coach as other cars came in and parked beside it.  Turns out they were all local baseball players waiting for their turn to have the ball diamond after two teams already playing wrapped up their game.  I found myself repeatedly glancing back at that Motorhome.  There just seemed to be something familiar about it.  The more I looked, the more familiar it became.  And then it dawned on me.....it sure looked like George and Suzie's Holiday Rambler coach.  The same coach I saw on George Yate's tombstone east of Tavistock just a mere 24 hours before.  Unfortunately, the ballplayers had all left and walked over to the ball diamond for their game so before Jim and I left I took a couple more pictures of the coach and left a Bayfield Bunch card on the picnic table beside the motorhome.  Assuming that was their rig, I figured the last time I stood beside it talking to George and Suzie was at Peg Leg Smiths boondocking spot just outside Borrego Springs, California.  Back home I found some photos I had of George and Suzie's coach as well as some pics on their blogsite.  Sure enough, everything matched up including the small black internet antennae on the roof above the passenger side front.  I am 95.5% sure this had been George and Suzie's coach.  Quite a coincidence and it sure brought back a flood of memories.  Our Awesome TravelsThe day turned out hot and humid so Pheebs and I stayed inside for the afternoon and waited for evening's cooler air.  Knowing moonrise was shortly after 8 p.m. we headed out to a high point of land on nearby Towerline Road to watch it come up.  The moonrise was late because of a cloud cover but eventually, it did pop out and I was able to get a few photos.  Mosquitos were bad and Pheebs couldn't figure out why I was swearing so much and flapping my arms around like a crazy windmill person.  We were home sometime shortly after nine. 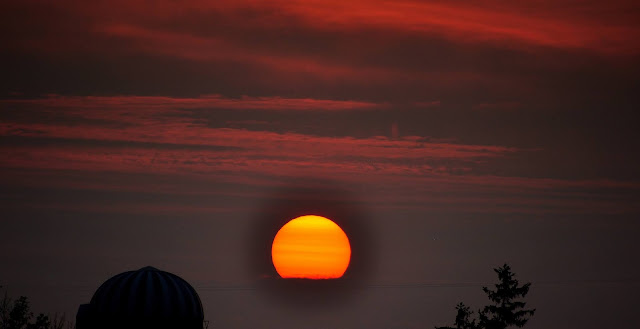 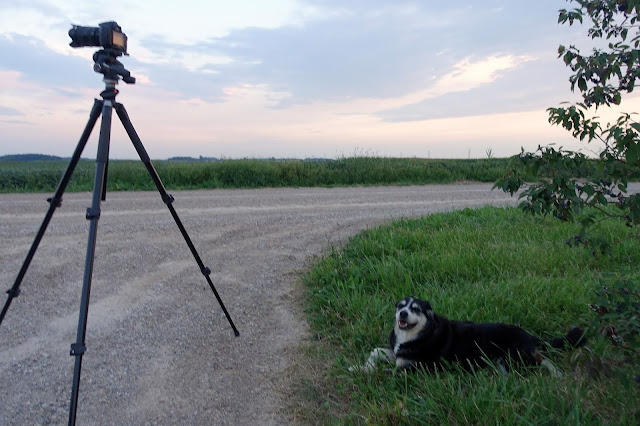 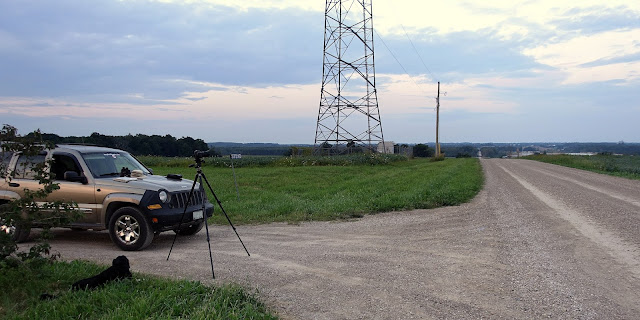 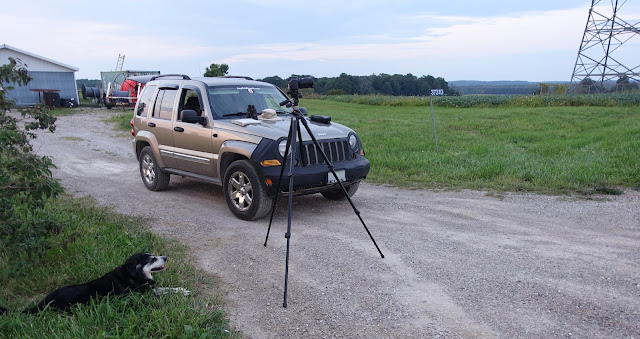 Stepping out Sunday morning the humidity hit me and I knew we would not be going for our usual country road morning walk.  I didn't want to start the day off feeling like a big ball of sticky paste.  Instead, we puttered into Bayfield then headed along our usual well-worn route southeast of Bayfield.  With temperatures and humidity rising, we were back home before 10 o'clock, closed all the windows and doors, cranked up the A/C, and stayed inside for the rest of the day. 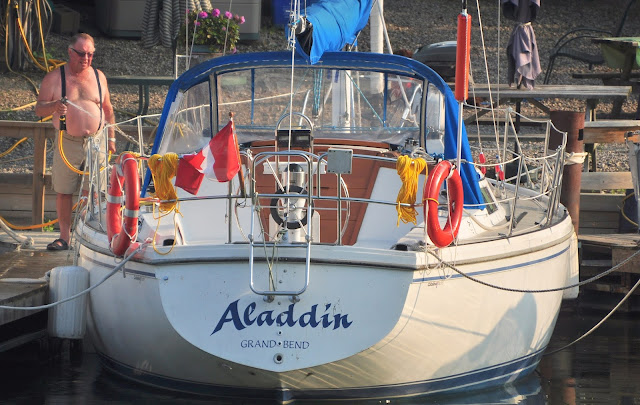 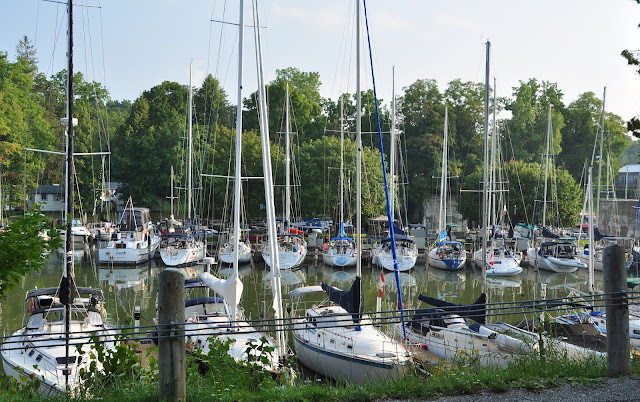 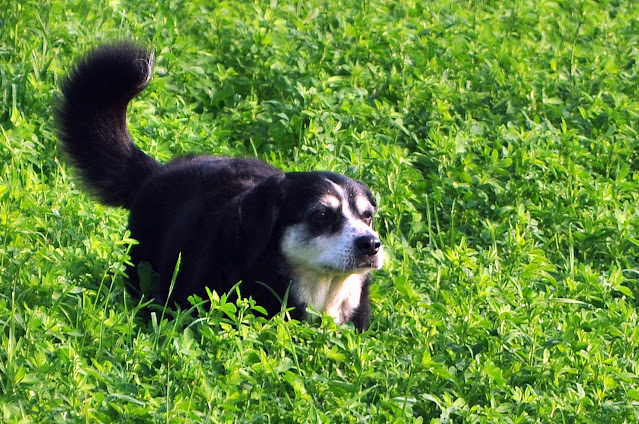 When I decided on this blog break last Friday I gave myself three days to get my head cleared up but by the end of the second day (today) I felt I was good to go again so here I am.  Thanks to everyone for their concern and for hanging in there. 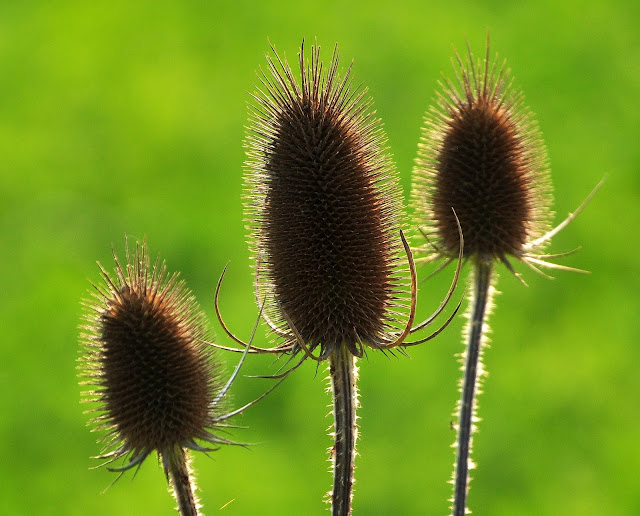 GROANER'S CORNER:((    Marketing translations:: Cracking an international market is a goal of most growing corporations. It shouldn't be that hard, yet even the big multinationals run into trouble because of language and cultural differences. For example, observe the following examples below.................
The name Coca-Cola in China was first rendered as Ke-kou-ke-la. Unfortunately, the Coke company did not discover until after thousands of signs had been printed that the phrase means "bite the wax tadpole" or "female horse stuffed with wax" depending on the dialect. Coke then researched 40,000 Chinese characters and found a close phonetic equivalent, "ko-kou-ko-le," which can be loosely translated as "happiness in the mouth."In Taiwan, the translation of the Pepsi slogan "Come alive with the Pepsi Generation" came out as "Pepsi will bring your ancestors back from the dead."Also in Chinese, the Kentucky Fried Chicken slogan "finger-lickin' good" came out as "eat your fingers off."The American slogan for Salem cigarettes, "Salem - Feeling Free," got translated in the Japanese market into "When smoking Salem, you feel so refreshed that your mind seems to be free and empty."When General Motors introduced the Chevy Nova in South America, it was apparently unaware that "no va" means "it won't go." After the company figured out why it wasn't selling any cars, it renamed the car in its Spanish markets to the Caribe.When Parker Pen marketed a ballpoint pen in Mexico, its ads were supposed to say "It won't leak in your pocket and embarrass you." However, the company mistakenly thought the spanish word "embarazar" meant embarrass. Instead the ads said that "It wont leak in your pocket and make you pregnant."An American t-shirt maker in Miami printed shirts for the spanish market which promoted the Pope's visit. Instead of the desired "I Saw the Pope" in Spanish, the shirts proclaimed "I Saw the Potato."In Italy, a campaign for Schweppes Tonic Water translated the name into Schweppes Toilet Water.
----------------------
Prior to turning on the TV to watch a recorded soccer match, I said to my wife, “Don’t tell me the score!”
She replied, “ Don't worry, there wasn’t any.”
================== 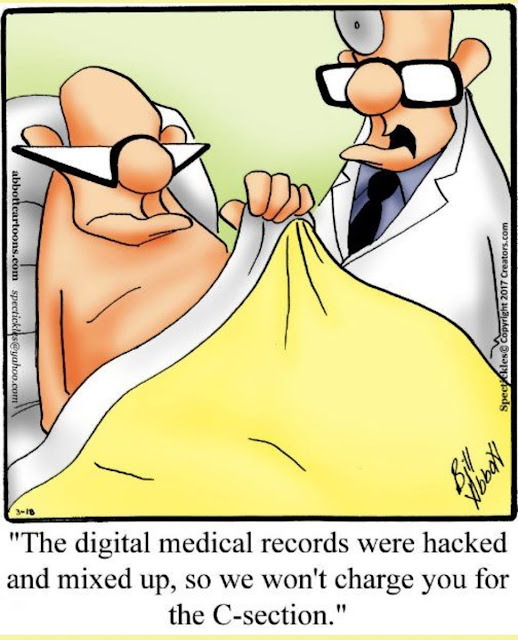 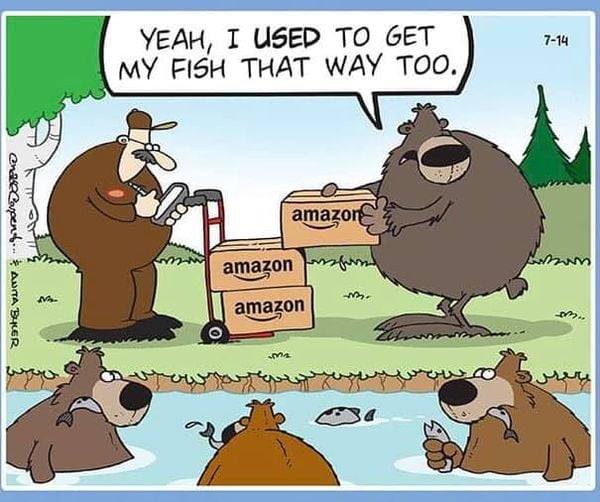 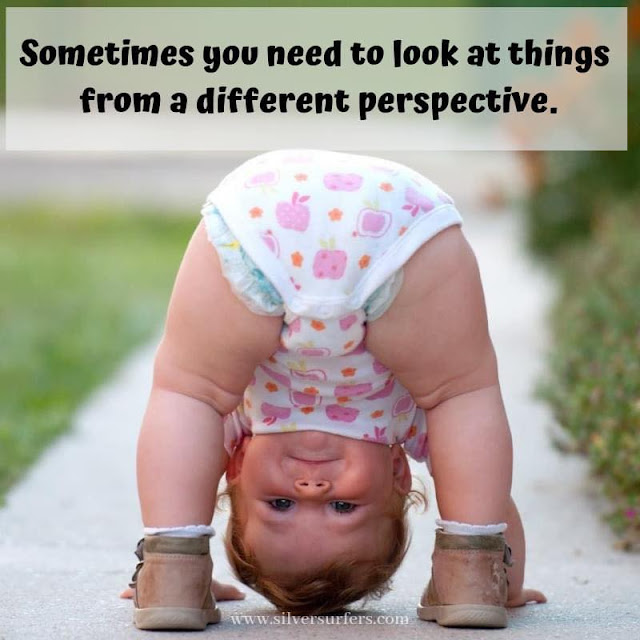